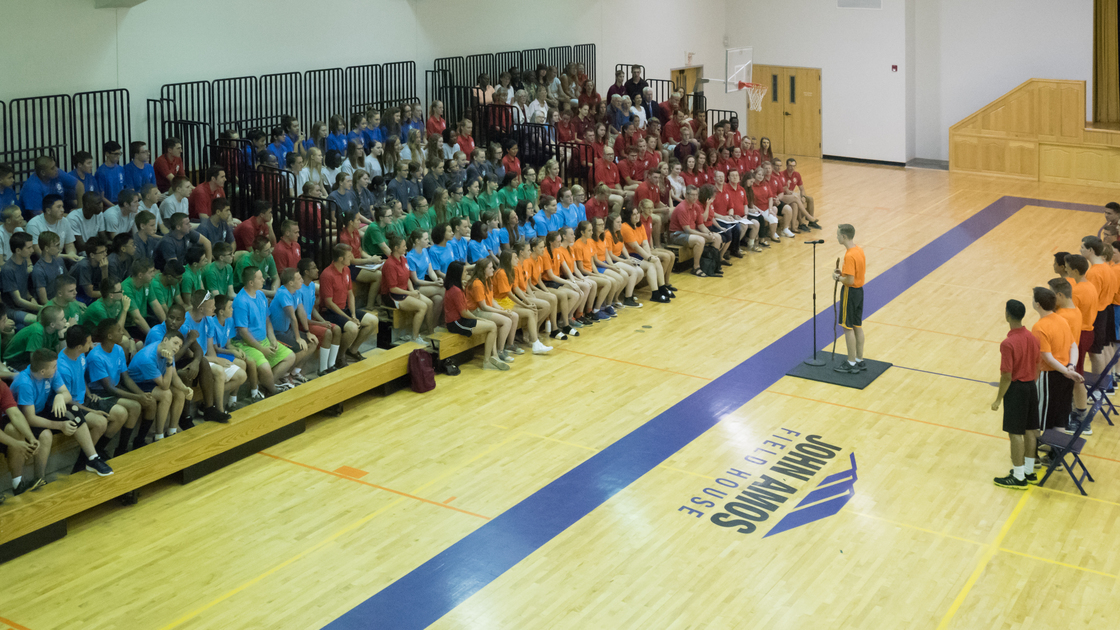 A hush fell over the crowd, mostly because Camp Director Wayne Turgeon shushed us. “That’s how Moses must have felt,” he said, holding the walking stick up. It was time for another Stick Night, when the entire camp gathers in the John Amos Field House; each staff member and camper takes their turn to introduce themselves.

Mr. Turgeon and his wife started it off as we all settled in on the wooden bleachers. “You’re in for a real treat,” Mr. Turgeon said, “as long as you can take it on your seat.” And yes, the seats were hard.

Following his parents—Assistant Camp Director Eric Burns and his wife Laury—Dan Burns, the Operations Manager of the Camp, made his way up with his young family as the crowd erupted with cheers. “Something tells me that wasn’t for my wife and me,” he said gesturing to the baby in his arms, their young son named Roan.

Canoeing instructor Abraham Blondeau and track instructor Jordan Ellis share the same staff this year, inevitably leading to a Stick Night pun: “I have the same staff behind me and in my hand,” Ellis said at his turn to introduce himself.

Jason Cocomise, the instructor for flag football, commented that this seems to be the first camp in years where neither a Cocomise nor an Ellis is a camper, prompting a slightly malicious round of applause from the audience. His goal for the camp is to be “better than the nfl in the area of concussions.” We’re sure the campers hope he succeeds in that goal.

Head volleyball instructor Josh Sloan stooped to the microphone to offer the suggestion that the normally girls-only sport at least be offered to the boys for Open Sport nights.

The Dance Instructor this year, Shane Granger, expressed his goal to show “how much this camp can affect your life.” He went on to talk about how he had enjoyed dance at Ambassador College and sep, even receiving the award for Dancer of the Session. He added that he remembered dancing with Mrs. Laura Turgeon in Pasadena, prompting Mr. Turgeon to rise from his seat with fist out in mock furor!

Canadian Instructor David Dodds and his equally pale cycling assistant Cathryn Bancroft expressed their goal to not get sunburned.

Archery instructor Bailey Crawford said, “I don’t want you to get an arrow stuck in you.” It’s good to have achievable goals—yet one camper warned later that he actually had shot himself with an arrow. Archers beware!

With the round of instructors finished, it was time for the campers and their counselors to take the stage. Dorm 1B announced their dorm name as Samuel’s Outstanding Army of Royals. Seventeen-year-old Leviticus Atticus Harms, who goes by Levi, started the campers off with a “Welcome to PYC. Well, I’m the first one to hold the stick. And since we are standing oldest to youngest in my dorm, it just reinforces in my mind that…man I’m old.” His 16-year-old dorm mate, Dustin Hochstetler, confirmed this by saying, “I thought I was old, but Levi has made me feel really young and spry.” First time camper, 13-year-old Jordan Robinson made it his goal to, “listen to the older ones, like Levi.” And yes, the part about my brother is the longest part of this article. So there!

The night continued in a similarly humorous vein. Many of the goals expressed had to do with setting an example for the first time campers. Some, like Madison in 1G, wanted to “take anything I learn here down to my little sister.”

The ever smiling, blue-shirted Hannah of 2G commented that “Pyc is such an important part of becoming God’s royalty” following her counselor’s, AC junior Julia Hayes, exclamation that she would “help all these bluebirds fly.”

3G’s assistant counselor, AC freshman Ariana Eames, said she wanted to “help them remember how fun God’s way is so the world’s way holds no appeal,” following her camper Talea’s assertion that she wanted to “live right so everybody else can take flight.”

Melissa Barreiro, the counselor of 5G, said, “My job as a counselor is like flying a plane. I help my campers rise in the morning and to land in their beds at night. I help them to get to their destinations throughout the day.” She went on to talk about how she may be the pilot, but God is the one who has written the flight plan for her girls, and she is thankful He has also provided her with a co-pilot.

The night was a tremendous success. The faces have changed, but it is still God’s camp, and we are all happy to see His teens up there carrying the stick that has passed from one generation to the next.