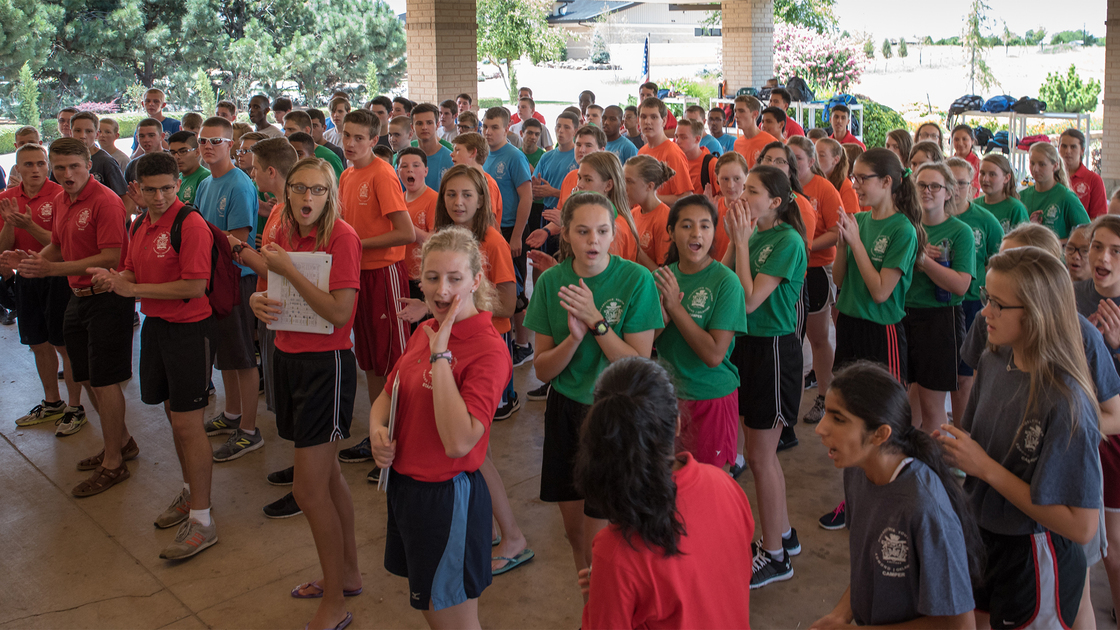 Reese Zoellner/PCOG
Campers and staff cheer before entering the lunch hall on the first day of PYC 2017.

The night before arrival day was loud and thunderous up into the early hours of the morning as the weather celebrated the United States’ Independence Day with its own special brand of fireworks.

The calm after the storm, however, brought a peaceful and cool morning to welcome the campers to pyc 2017. In the late morning, campers slowly began to arrive. The slow trickle made its way into the gym. I joined a few of my fellow workers on the stage to keep an eye on things. At that point, only a solitary camper was playing with a basketball.

By three in the afternoon, the gym had become a buzzing epicenter of activity. Teenagers from around the world were gathering together for basketball, volleyball and conversation. Some of the newcomers shyly made their way through the crowd to find something familiar, and I was pleased to see many of the more experienced campers greeting them with welcoming arms.

Around this time, I had a conversation with the archery assistant instructor, Tessa Gregory, a freshman at Armstrong College who was helping with the airport runs to pick up arriving teens. “The airport runs went very smoothly. It seemed like everyone was coming in slightly earlier than expected,” she said to me in front of the John Amos Field House. She was very excited to see everyone coming in safely and without delays.

All of the campers had arrived on campus by six in the evening and dispersed to their dorms to quickly change before heading to the Camp Orientation at Armstrong Auditorium where they would hear Mr. Turgeon speak. The first part of the lecture went over the general rules of the camp and explained what the campers should expect so that everyone could make this the most successful camp yet. The second part was a riveting piece around the camp theme: “Live Right—Take Flight.” The young people were encouraged to push against the wind resistance of Satan, society and self in order to take off with God’s way of life and into the future.

After the lecture ended, the dorms headed up to the soccer field where they got to know each other before the fireworks show. All around the campus, the neighbors were putting on their own shows, and we could see flashes of color from all directions.

Then, as the sun set, a fountain of color and fire started on the softball field, just down the hill from the spectators on the soccer field. Pops and sizzles lit up the sky as everyone cheered. One of the girls dorms began to sing the national anthem and their voices drifted across the field. The fourth of July ended in much the same way it began: with loud and thunderous celebration in the sky.