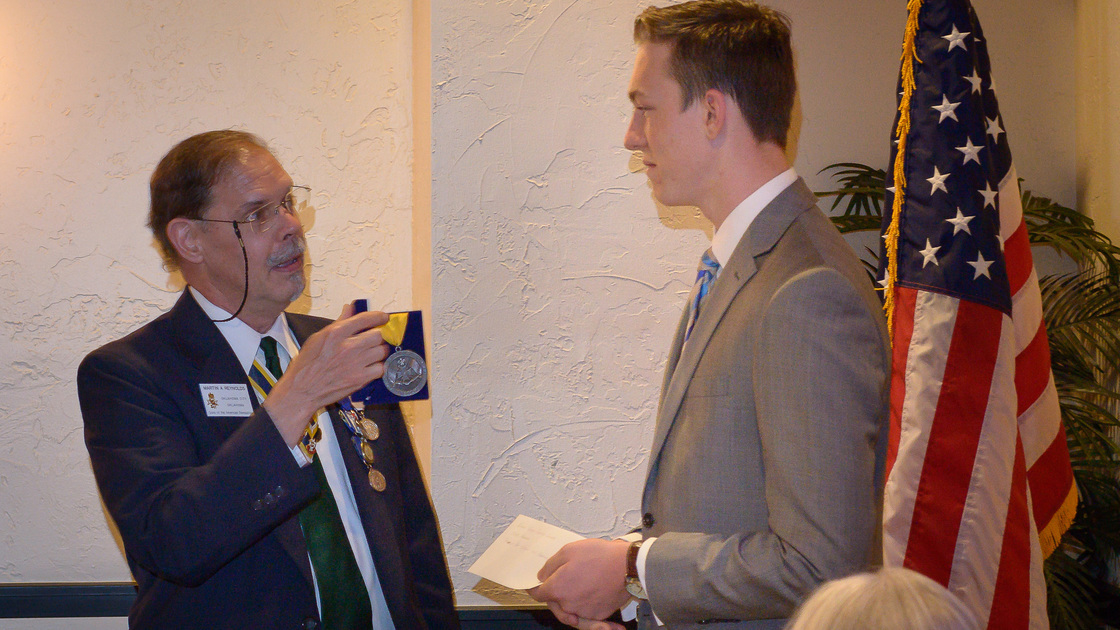 .. 2017 sweetspotimaging.com | All Rights Reserved
Caleb receives his state award from the chairman of the Oklahoma Sons of the American Revolution.

EDMOND—Imperial Academy high school senior Caleb Heerma won the state level of the 2016–2017 George S. and Stella M. Knight Essay Contest in March and went on to win third in the nation in May for his essay, “James Monroe: The Last Cocked Hat.” The contest is sponsored by the National Society of the Sons of the American Revolution.

Contest entries focus on “an event, person, philosophy or ideal associated with the American Revolution, the Declaration of Independence or the framing of the United States Constitution.” Heerma decided to write about James Monroe, who had more than 50 years of political and military experience before being elected as the fifth president of the United States in 1817.

“He’s done a lot of amazing things for the country,” Heerma said. “He’s, I think in some ways, probably the most qualified person to hold the office of president.”

In his 1,200-word essay, Heerma highlighted a few aspects of Monroe’s life, including the fact that he was the closest president to being elected unanimously other than George Washington and how the Monroe Doctrine shaped American foreign policy.

The chairman of the Oklahoma Sons of the American Revolution notified Heerma of his state award on March 6; he received a medal and a $200 cash prize. The national essay contest chairman for the Sons of the American Revolution selected his essay as the third-place finisher nationally, and Heerma received his award, including a $1,000 cash prize, on May 8.