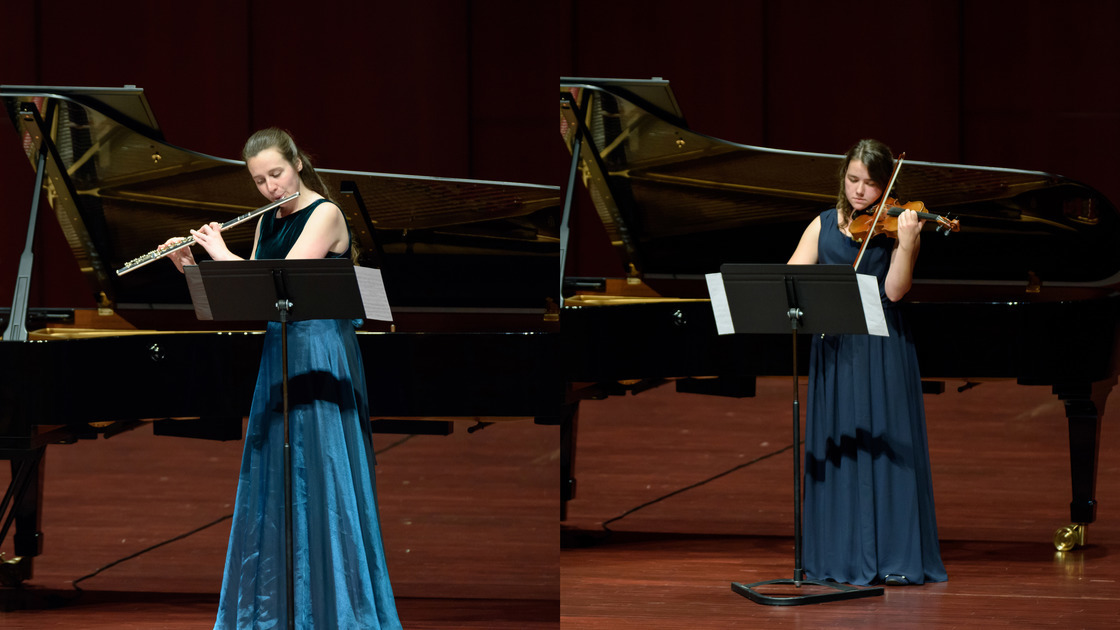 EDMOND—Herbert W. Armstrong College seniors Emma Smithies and Kaitlin Eames played flute and violin solos and duets at Armstrong Auditorium for a crowd of 70 on April 20 during their senior recital. Fellow college students, Philadelphia Church of God members, and the music instructors of the two girls shared the girls’ final school performance of their college careers.

The hour-long recital began with Smithies and Eames playing three solo pieces each, including a solo violin arrangement of Vivaldi’s “Spring” concerto, a flute performance of Debussy’s “Syrinx,” Fritz Kreisler’s “Liebesleid” (“love’s sorrow”) on violin, and French composer Cecil Chaminade’s Flute Concertino in D Major. Smithies and Eames concluded the recital with a five-minute duo for flute, violin and piano by Russian composer Cesar Cui. Throughout the recital, the instrumentalists were accompanied on the piano by either Mark Jenkins or Ryan Malone, both music faculty members at the college.

Brisbane, Australia, native Emma Smithies started playing flute nine years ago, and she said she hopes to continue playing for special music at Church services and at entertainment nights when she returns to Brisbane after graduation. She also wants to collaborate with flute-playing youths in her local church area. New Zealander Kaitlin Eames comes from a large family in which nearly everyone plays an instrument; she has played the violin for 13 years.

“Seeing the Eameses play for entertainment night at my first Feast was actually one of the things that made me want to play the flute. When their family moved to Brisbane, we would often play together. Performing with Kaitlin always makes me feel more comfortable,” Smithies said.

“She is one of my closest friends,” Eames said of Smithies, “and sharing this recital, with all the nerves and preparation leading up to it, brought us even closer.”