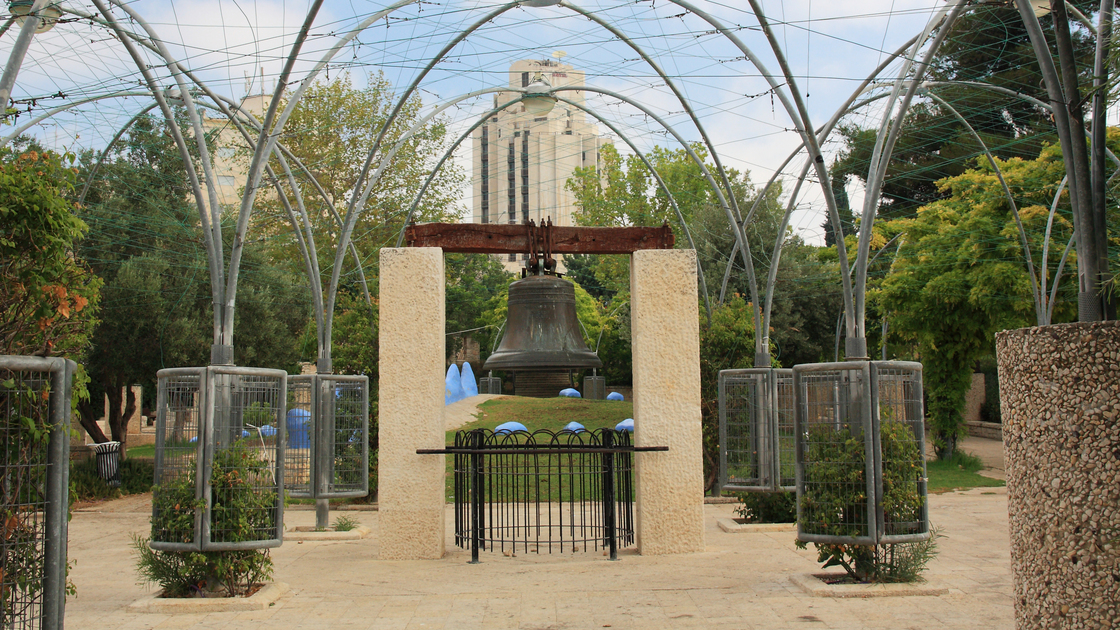 Why would a popular mayor of the world’s most contested city form a lasting friendship with an unofficial ambassador for world peace?

Within three years of his 1968 meeting with Israel’s third President, Zalman Shazar, Mr. Armstrong hosted Jerusalem’s mayor, Teddy Kollek, at Ambassador College in Pasadena, California. A week and half later, the pair were in Israel for meetings which would have a far-reaching impact for the Work. Mr. Armstrong wrote about this in a co-worker letter from April 12, 1971:”Still another very important development here: I am here also to consult further with Mayor Kollek of Jerusalem. He was our guest at Ambassador College in Pasadena only eleven days ago. And also with officials of the government’s Ministry of Education, concerning the distribution of our booklets here in Israel.”

Some months prior, a professor from Hebrew University had worked with an Ambassador College faculty member to translate some of Mr. Armstrong’s books into Hebrew. Mr. Armstrong saw this development as “a great milestone,” as it would enable the distribution of the gospel message to the Hebrew-speaking population of Israel.

During May of 1976, Mr. Armstrong met with Teddy Kollek and other city officials in Jerusalem. Three months later, they met again, and Mr. Kollek personally picked up his American friend from the city’s Hilton Hotel and guided him through a personal two-and-a-half-hour tour of sections of the old city.

After lunch, they drove to the newly constructed Liberty Bell Park, where a prominent sign was displayed in both English and Hebrew:

Mr. Armstrong was scheduled to be back in Jerusalem on July 2 as the guest of honor at the park’s ground-breaking ceremony. “The last day of June” he recalled in an August 19, 1976 letter, “I had boarded the G-II jet aircraft, bound for Jerusalem. We were forced down at Bangor, Maine after crossing the United States from southwest to northeast, as I think I wrote you before. We had a cracked window in the cockpit. We were forced to return to Pasadena flying at low altitude. So the mayor conducted that ceremony alone.”

The Plain Truth magazine interviewed the mayor for its April 1977 edition. They highlighted how despite explosions in Zion Square, protests on the West Bank and in the old city, Jerusalem was safer at night than the American cities of New York, Detroit or Houston. Four months later, Mr. Armstrong was back in Israel’s capital for more meetings with the mayor.

In August 1977, Mr. Armstrong suffered total heart failure. After initial revival, it took over a year of rest to restore his strength to the point where he could travel again. It was during this time that he convalesced in Tucson, Arizona, completing and releasing his book, The Incredible Human Potential. Because of this illness, he was unable to travel to Jerusalem for the dedication ceremony of the park.

During a Bible study on May 12, 1978, Mr. Armstrong reminded his listeners that Jerusalem’s mayor had approached him regarding the Liberty Bell Park project, asking him if he wanted to be involved. He told Mayor Kollek that the Ambassador Foundation would take on the project of building the park as a gift to the city.

Despite being absent from the dedication of the park, Mr. Armstrong was still honored by Jerusalem’s governing elite. After completing his first trip overseas since his illness, he wrote co-workers on December 27, 1978: “I have just returned from my first trip abroad since my severe illness. This was another visit to Jerusalem. I had a very busy and eventful four days in this city soon to become the world capitol.

“Mayor Kollek had arranged a special inauguration of the new downtown city park in my honor, with a formal ceremony, a band, and speeches. Over the park was flying the stars and stripes, alongside the Israeli flag, and at the entrance on a special stone sculpture work, a plaque had my name engraved in it (since I had sponsored the Children’s Playground area at the entrance of the park). This was done through the aicf (Ambassador International Cultural Foundation). The park is called the ‘Liberty Bell Park,’ and inside the entrance is an exact replica of the Liberty Bell, a gift of the city of Philadelphia to the city of Jerusalem. So it’s like a bit of America in the very ancient and historic city of Jerusalem.

“There was a special program for me and our party at the iccy (International Cultural Center for Youth), founded by Eleanor Roosevelt and by Moshe Kol, for years a member of the Knesset and Minister of Tourism for the nation. The program consisted of special dances by both male and female Israeli and Arab youth. The iccy has been almost wholly supported in the past ten years by Ambassador College and the aicf, and is doing a good work in bringing about an active friendship between Arab and Israeli youth. In front of the entrance of the iccy building is a large paved court. It has been named the ‘Herbert W. Armstrong Square,’ with that name engraved in a stone marker.”

In the October-November 1980 Plain Truth, Mr. Armstrong wrote about the movement at the time to make Jerusalem an internationally-controlled city, showing the governmental infighting that would result between the Jews and Arabs.

“What, then, does the Almighty Creator God say about it?” he asked. “God once chose Jerusalem as His city. But ancient Israel polluted it and their covenant with God. They were conquered and driven out. God turned His back on Jerusalem. He says He will yet choose Jerusalem, it will yet become His chosen city, but it is not that today. Look at the status of Jerusalem today, and the prophecies for tomorrow, in the Bible. … A message (Isaiah 40:9-10) is yet to go by a servant of God to the cities of Judah. In whatever way God wills, it shall go.”

The editor-in-chief concluded this powerful article with: “But at Christ’s coming as king of kings to rule all nations, to usher in world peace, He shall again choose Jerusalem as His capitol, then to become the capitol from which the whole world shall be ruled for a thousand years! I personally have come to love Jerusalem, as I know my friend Teddy Kollek loves it, and I expect to spend much time there in the future, if Christ so wills!”

Eighteen days later, Mr. Armstrong wrote to co-workers of the dramatic events that had led up to that meeting. “Our brief flight to Jerusalem was a ‘first!’ We were given government permission to fly direct from Cairo to Jerusalem airport. Due to the hostilities between Egypt and Israel in the Yom Kippur War, no flights had been permitted between the nations until the Camp David peace talks, and then flights were permitted only from Cairo to the Ben-Gurion airport at Tel Aviv. But our plane was given government permission to make the first flight direct to Jerusalem airport.” Mr. Armstrong was the first person allowed to fly directly from Egypt to Jerusalem after the Yom Kippur War. He really was an unofficial ambassador for world peace!

Mayor Kollek praised Mr. Armstrong highly throughout their friendship, saying that he had “brought light to the world” and was “an outstanding personality of our time.” At a luncheon Kollek hosted in Mr. Armstrong’s honor, the mayor expressed the city’s appreciation for all that he had done for Jerusalem. The mayor then presented Mr. Armstrong with a gold and silver statue of David defeating Goliath. You might have seen this ceremony if you have ever watched the 1985 Behind the Work film; it was recorded and placed within that film to show the impact of this unofficial ambassador of world peace on Jerusalem.

The Good News magazine of May 1986 reported Teddy Kollek’s final remarks regarding his longtime friend after he heard of Mr. Armstrong’s death: “It is with great sorrow that we learned of the passing of President Herbert W. Armstrong. One could only be deeply impressed by his vast efforts to promote understanding and peace among peoples. His good deeds were felt in many corners of the world.

“In Jerusalem his care and concern can be seen in the many projects he undertook: the archaeological excavations uncovering the history of millennia, the children’s playground and activities he helped sponsor, the dedicated work of the Ambassador College students. His visits to Jerusalem were always very special and I was privileged to share these with him. He helped foster the goals we set to ensure the future of Jerusalem, King David’s city.”

Mr. Armstrong fulfilled his commission as the end-time Elijah and delivered the gospel message with the future hope of the World Tomorrow. He delivered this message to the public through the World Tomorrow program and his many books and booklets, and he delivered it even to many world leaders by personally meeting with them. These world leaders recognized the truth and hope in the message that Mr. Armstrong delivered to them. The gospel truly was preached around the world as a witness to all nations, fulfilling the prophecy in Matthew 24:14. That was why Mr. Armstrong had close relationships with world leaders like Mayor Teddy Kollek; God was opening doors for him to spread the gospel message around the world.

He traveled the globe meeting with more world leaders than any other man alive, and those leaders called him the unofficial ambassador for peace. But out of all places he traveled to, Jerusalem was the city Mr. Armstrong visited more frequently than any other. He knew well that God had chosen Jerusalem to be His world headquarters in the World Tomorrow (2 Chronicles 6:6). What a wonderful vision of hope!