Member Helmut Mueller: From Arnsberg to Australia
PCG member voyaged to a new country, new church and a new meaning to family.
By Brian Sherwood • May 25, 2016 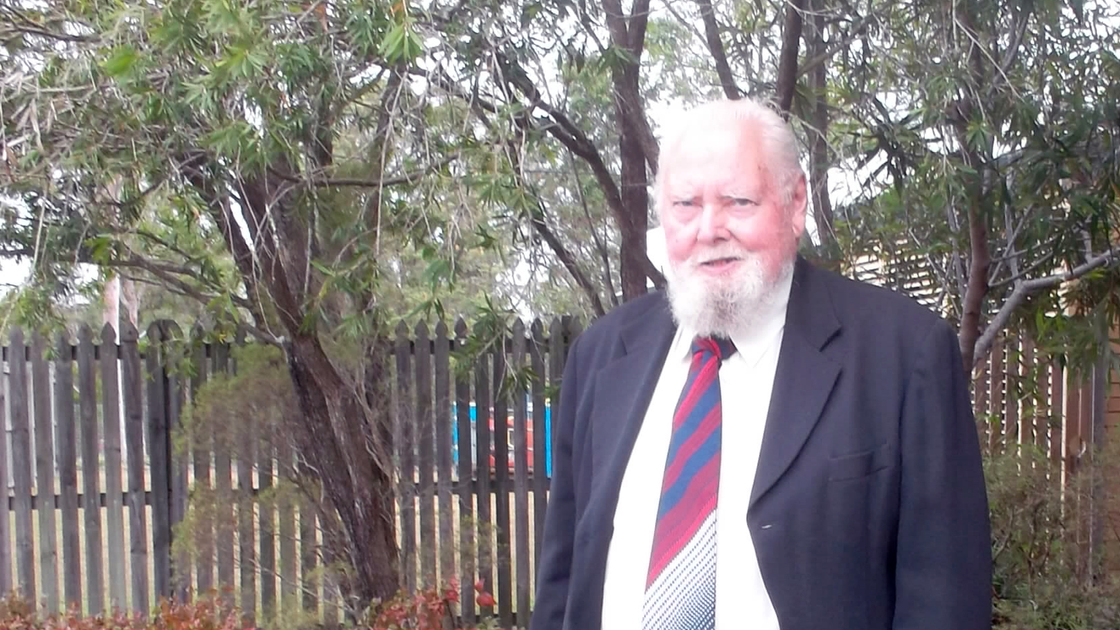 AUSTRALIA—“God bless Austria.” That was the farewell of the Austrian chancellor the evening of March 11, 1938. The next day, the Nazis landed at Aspern Airport in Vienna and the German army crossed the border into Austria, accomplishing the “reunification of Austria with the German Reich” as Adolf Hitler formulated it for a law decreed that same day. The “Anschluss” was now complete.

As German boots marched over the bridge across the Inn River into Austria, and as Austrians woke to the news that their country had been annexed by Nazi Germany, George Mueller and his wife saw their son, Helmut, born. The Muellers lived in the small town of Arnsberg in North Rhine-Westphalia, where George was a civil servant for the state government, a job he held for the duration of World War ii.

Arnsberg was not spared during the war. The Royal Air Force targeted the German Möhne Dam with bouncing bombs in 1943 during Operation Chastise, and further British raids destroyed the railway viaduct with “Ten-Ton Tess” bombs in 1945. Soviet forces overran Austria in April of that year, and the nation seceded from the Third Reich.

In the final year of Hitler’s reign, Helmut started school in Arnsberg at the age of 6. By the early 1950s, he was attending his first year of high school at the Arnsberg Gymnasium.

Being a heavily industrialized nation and a net importer of food, Austria was still facing food shortages five and six years after World War ii. The conflict had heavily damaged its infrastructure, and for the large number of people living in the western-occupied zones, food was scarce.

With no access to meat, oil, and other basic foodstuffs, Helmut and his family survived on potatoes or noodles and tried to grow a few vegetables. Within this environment of deprivation, Helmut became ill due to lack of food. When he recovered, the Arnsberg Gymnasium did not want him anymore, so he went back to his previous school. Yet his parents were unhappy with the schooling he was receiving there and decided he would become a Catholic priest. They sent Helmut about an hour’s drive away to the county of Reitberg to attend the seminary there of the “weiß Väter,” the order of the White Fathers. After a year of finding it difficult to learn Latin, Helmut left at age 16 to start an apprenticeship as a bricklayer.

During his apprenticeship, he was treated very badly because he was a skinny lad and because the business owner for his own reasons hated civil servants like his father and took out his hatred on Helmut. Helmut completed his apprenticeship nonetheless, but the course of his future was about to be altered once again.

By 1955, Helmut was a German citizen. This was the year that the West German army formed the “Bundeswehr” and began recruiting soldiers. Then came the draft. The military was conscripting all lads born in 1938, and Helmut was on the list.

Facing a Cold War future inside the military of a country he had great anger toward, Helmut went to Dusseldorf for a chance at an unlikely prospect: obtaining a passport. A passport might enable him to avoid conscription and to start a new life. It was unlikely that his parents would agree, but Helmut was shocked when they did exactly that. He considered it a miracle.

Passport in hand, he purchased a boat ticket to travel from Italy to Australia. But because he was still under the age of 20, the shipping company required him to secure his parents’ permission to make the voyage. He says that even at the time, he felt very deeply that obtaining the passport and passage to Australia was a miracle from God.

In 1957, Helmut boarded the ship and left his place of birth for good to begin a four-week journey to a new life in one of the farthest places in the world, Australia. About a month later, his ship sailed into Sydney Harbor, its iconic bridge spanning from Dawes Point to Milsons Point and symbolizing a different land and a great unknown future ahead.

“Everything seemed so foreign,” he says. “The language, buildings, driving on the left-hand side of the road, and what struck me was the money. The coins in Australia were 50, 60 years old, but in Germany, we went through four different currencies: the mark, rentenmark, reichsmark and then the deutschmark.”

Mueller became a storeman and packer for Mynor Cordials in Sydney. There he came into contact with a fellow employee who was a Seventh Day Adventist and was determined to convert him—by visiting him at his residence once a week for an entire year.

Mueller purchased a Bible so that he could prove that what his co-worker was saying was true. But he found that the two did not square up, so he did not further pursue Seventh Day Adventism. Later, while working in Sydney as a Johnson & Johnson quality control officer, he encountered a colleague handing out literature at work. It was religious literature produced by Oral Roberts, Billy Graham and Herbert W. Armstrong. He picked up a copy of a magazine called the Plain Truth, and he says what Mr. Armstrong wrote about astonished him.

“I never could believe what the Catholic Church told and taught me,” he says. “The Seventh Day Adventists also seemed to have no answers. But God’s truth did! I found that all of my questions, especially around God’s purpose and potential for man, were answered. Learning that truth was one of the most exciting times of my life.”

Mueller went on to read the Plain Truth for a number of years and completed the Ambassador College Bible Correspondence Course. He began tithing in 1967, asked for a Worldwide Church of God minister to visit him in 1968 and was invited to services in the first week of 1969.

The move was not easy: Johnson and Johnson was pressuring him to work on Saturdays. But Mueller refused to break the Sabbath and instead broke off his employment with Johnson and Johnson. He returned to his storeman/packer role, this time for Kellogg’s.

Over the next few years, a new opportunity opened up for Mueller. He volunteered to work for the Worldwide Church of God in Sydney at Ambasacol Press. In 1974, he was offered a full-time job working in the press department. While working for the Church, he met Heather Bryant at Sabbath services; they married on July 6, 1975.

“I was in God’s Church for seven years and was quite prepared to be a single for the rest of my life,” Mueller said, “but I met Heather at services, fell in love, and we married. I deeply believe that was a wonderful miracle from God, and one that I am deeply thankful for. Marriage taught me so much about family, a wonderful, positive experience, which I sadly did not have when I was growing up in Germany.”

When Ambasacol Press closed, the Muellers moved to Kyogle, a township in northern New South Wales. There, Helmut became a beef farmer and worked in a local veneer factory. They started a family and had three boys. Every month, the family travelled to services in Grafton, and Helmut attended the Grafton Spokesman Club.

Mueller recalls a wonderful memory: the state of the Church in the early 1980s. After a liberal and damaging period through the 1970s, God was now using Pastor General Herbert Armstrong to set the Church back on track. “Seeing the leadership from Mr. Armstrong, the growth year on year of the Church was a wonderfully exciting time for God’s people,” Mueller said.

This period of spiritual soundness and great growth lasted through early 1986, when Mr. Armstrong died. The new leaders of the Church promised to follow the teachings that Mr. Armstrong had proved from the Bible, but Mueller began to notice subtle changes in the Church’s literature and teachings. They were less and less focused on prophecy and more focused on “self-help” messages for improving one’s relationships and life. Teachings on cosmetics, birthdays and other issues were reversed.

In 1995, another magazine arrived in the Muellers’ letterbox: the Philadelphia Trumpet. Mueller says he does not know where it came from, but he started reading it immediately. The Worldwide Church of God was now drastically different. The new pastor general taught that since the government allows a tin of salmon to contain only 5 percent of fish, you may as well eat what you want. In 1996, leavened chocolate biscuits were being served during the Feast of Unleavened Bread. This was the final straw for Mueller, who contacted the Philadelphia Church of God, publisher of the Trumpet, to confirm whether it was staying true to the doctrines God had taught through Mr. Armstrong.

Mueller says that Pastor General Gerald Flurry’s book, Malachi’s Message, answered so many questions he and his wife had as to what was going on inside the Church of God.

Regional Director Alex Harrison visited the Muellers in Kyogle and invited them to services in Allora. Two decades later, Helmut and Heather and their son, Albert, still faithfully attend the pcg. They are now retired, but the adventure continues as they are enjoying the challenge of building a new home as a family in Brisbane.

Mueller sums up his around-the-world voyage through life this way: “My life in Australia has been a wonderful blessing and experience.”