Why You Must Know and Love the Legacy of Herbert W. Armstrong
Learn to see God behind the man.
By Gareth Fraser • Jan. 12, 2016 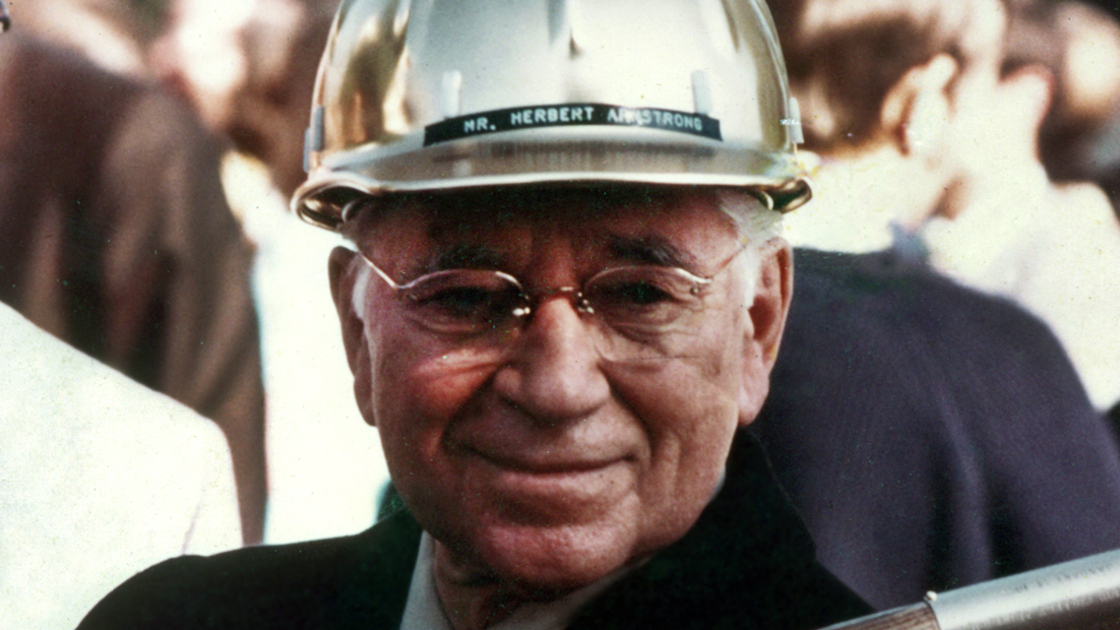 January 16, 1986: Mr. Armstrong is dead! Those words are still burned into my mind: My father repeated them aloud during a phone conversation with my 20-year-old brother who was in Pasadena, California, at Ambassador College. I was 14 years old; my sister was 19. This man of God, a man we always heard about as children and teens in God’s Church, was gone.

I remember crying for a while after hearing the news and being encouraged and comforted by my parents: “It’s OK son. He’s sealed and awaits the resurrection. The Work will go on, and Christ will soon return.” Two years before, in Brisbane, Australia, I had run alongside his limousine, eagerly waving hello as it drove toward the drop-off point for his special message to a few thousand people who had gathered at the campus of Queensland University to hear him speak.

After his visit to my home country, he wrote a letter to Church members and co-workers worldwide: “I want to say more about these sep [Summer Educational Program] camps, and the entireY.O.U [Youth Opportunities United] program,” he wrote on Jan. 15, 1984. “I want you to realize what an important part of God’s Work this is. Our great commission is to teach all nations—teach Christ’s gospel of the Kingdom of God. The Kingdom of God is the Family of Godinto which God’s Church shall be born. God Himself is a Family—the GodFamily. These are children of members of God’s Church. They have access to Christ (1 Corinthians 7:14), whereas those of the world do not!”

He was writing about me and all the other children and teens. He was telling us we were different—set apart for a holy purpose through our believing parents—not to glorify us, but God.

Our exposure to God’s Work through His apostle came at the end of Mr. Armstrong’s life, a white-haired patriarch whose example and love reached across the Pacific Ocean from California to my home in Australia and to other teens around the globe.

We knew he was battling a heart condition, blindness and deafness, but our spiritual grandfather carried onward, making no excuses, traveling worldwide and visiting his children in the faith. Mr. Armstrong had special qualities not found in other men of his age.

My dad’s father had died after World War ii when my father was only 7 years old. Mr. Armstrong was a father figure for him, a man who possessed stability, strength, honesty, integrity and other qualities of greatness and godly heroism. In our home, we were raised to fear, respect, honor and deeply love the man God was using as His chosen apostle. He was unique, called by God to fulfill Christ’s prophetic words: “And this gospel of the kingdom shall be preached in all the world for a witness unto all nations; and then shall the end come” (Matthew 24:14).

We teens saw that commission fulfilled before our eyes. Through Mr. Armstrong’s example and interaction with us, we felt that we were a part of that Work. He had our love and support. He helped turn our hearts to our parents and to God through regular teen Bible studies, Y.O.U local and regional activities, winter and summer camps, district weekends, and musical, cultural and sports activities.

The story of how one of Mr. Armstrong’s final gifts—the predecessor to True Education—came into existence is quite a unique one.

While Mr. Armstrong was living in Tucson, Arizona, God’s Church was being unlawfully attacked by the State of California. But Mr. Armstrong did not let this deter him from thinking about the young people. Mr. Armstrong held Bible studies in his house on the Sabbath after his heart attack in 1977. It only included a group of 12 people, but the idea of Youth magazine came to Mr. Armstrong during those Bible studies. Mr. Armstrong had a genuine concern for the children in the Church and those around the world. God implanted in Mr. Armstrong’s mind the thought of expanding the physical, emotional and spiritual education of teenagers.

Youth magazine impacted my life and helped me in so many ways. I learned how to tie a tie; how to dance a slow rhythm; how teens lived in other countries; fine points of sportsmanship, culture, art, cooking and photography; and more about God’s character, Christian living and honoring my parents. This magazine was a lifeline to the minds and hearts of those of us teenagers around the world who were part of the fulfillment of an end-time prophecy of God: “Behold, I will send you Elijah the prophet before the coming of the great and dreadful day of the Lord: And he shall turn the heart of the fathers to the children, and the heart of the children to their fathers, lest I come and smite the earth with a curse” (Malachi 4:5-6).

Four months after Mr. Armstrong’s death, a tribute edition of Youth magazine recalled his long service to children and teens not only in the Church but worldwide.

“Even in his 90s, he would make trips to visit young people at summer camps around the world,” recalled the April edition of Youth ’86. “Over the years, many teens have come into contact with Mr. Armstrong through his many functions as chancellor of Ambassador College and Imperial Schools, president of the cultural and charitable Ambassador Foundation, broadcaster of the World Tomorrow television show, pastor general of the Worldwide Church of God, as well as editor in chief of Youth ‘86 and several other publications. Not exactly a light schedule! Thousands of teens felt a strong bond to this energetic and grandfatherly gentleman. When we asked readers last August who their heroes were, Mr. Armstrong came in third, behind God and parents, as someone readers look up to.”

Today, I am in my 40s, happily married to a beautiful woman, rearing four wonderful children, three of whom are teenagers. The legacy of God’s apostle of the Philadelphia Church era remains burned into my mind and life. My wife and I find ourselves teaching the very same lessons to our children that our parents taught us.

Why must they know and love Mr. Armstrong’s legacy? Why must they know how God used him to turn the hearts of teens to parents and God? Because with this gift of history, they can clearly see where and through whom that legacy continues today.

Gerald Flurry is editor in chief of True Education. For over 20 years, he has continued the work God did through Mr. Armstrong and restored youth activities; camp; a college; a grade school; cultural, musical and sporting opportunities; and this website’s youth section you are reading. Through this work, teens are educated daily by their parents in homes around the world about God’s way and the prophesy-again commission they are set apart to support (Revelation 10:11).

It’s not about the physical man, but the Almighty God behind the man—just as it was with Moses, Joshua and the New Testament apostles. God earnestly desires that your heart be turned to your parents, fulfilling the Fifth Commandment. By so doing, you will turn your mind, heart and life to God and His purpose for you—which will ultimately affect teens worldwide and all of mankind.