Why Was Mr. Armstrong Interested in the Judean Leopard?
By Gareth Fraser • December 2015 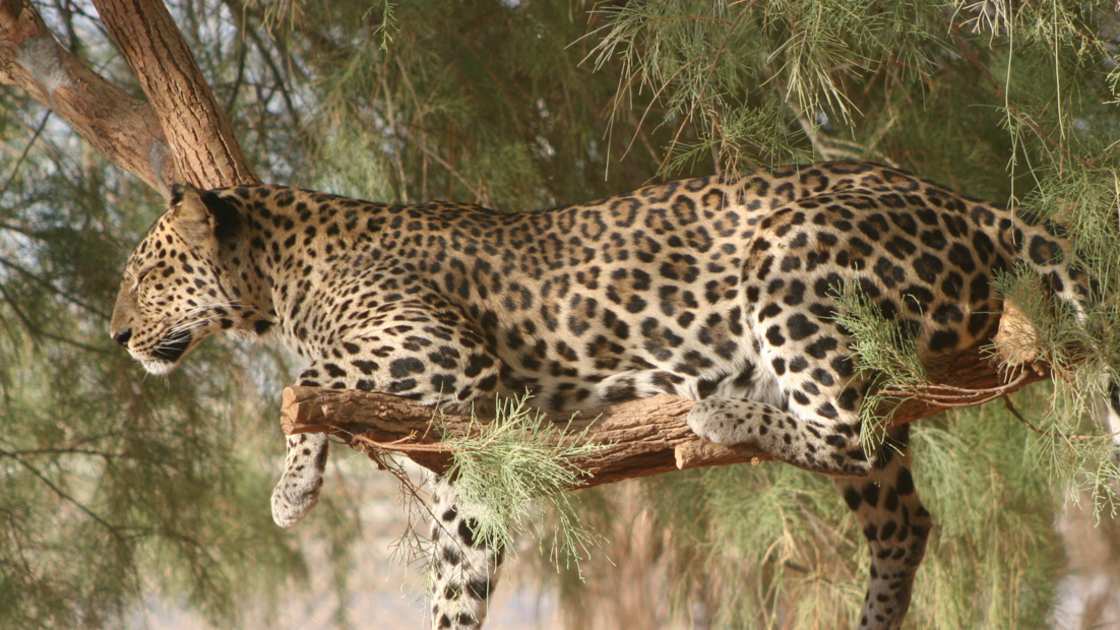 In Jerusalem on Friday, June 29, 1984, “Giora lIani, a senior zoologist with the Israeli Nature Reserves Authority, visited Mr. Armstrong. He talked about the Judean leopard, an animal thought to be extinct until one was sighted 12 years ago. Before that the last reported sighting was about 2,000 years ago. The leopards are on the endangered species list and evidence indicates that about 20 to 25 Judean leopards still exist.

“Mr. Ilani’s presentation to Mr. Armstrong included a slideshow prepared from photos he took during 12 years of research in the Judean Desert. The show not only included biblical references to the leopard, but also included the animals they feed on. Mr. Armstrong asked Mr. Ilani to come to Pasadena and present the slide show in a college assembly or Church Bible study” (Worldwide News July 16, 1984).

Ilani is credited with what research we do know about Israel’s leopards. His early years were spent in the Kibbutz Gan Shmuel. He would later join the national army, and by 1958 was volunteering for the Society for the Protection of Nature in Israel.

There are 20 streams that link the Dead Sea to the Judean desert. However, only two have annual water, the Nahal Arugot and Nahal David. These twin streams make up the boundary of the Ein Gedi oasis. As such, this is the geography leopards subsequently visited.

Sightings have been reported in 1969, during which time llani was employed by the National Research Academy as chief zoologist. “Ilani started to seek them out. It would take him almost five years of following tracks to meet one face to face. The memory of the triumphant moment still moves him: ‘On Oct. 19, 1974, I managed to photograph one. It was the first time in history that a leopard was photographed in the Middle East. (I remember the date, because the next day my son was born.) After the photograph I cried nonstop, I was so moved and so excited’” (Pollution in a Promised Land). His photograph was later published by the New York Times.

Two years before the Jerusalem meeting between the unofficial ambassador for world peace and the famous Israeli zoologist, an electric fence was installed around the Ein Gedi oasis. The effort was made to stop the leopards from access and reduce their elimination of area animals. The fence was not completely successful. Local farmers began trapping and killing the leopards, particularly females. This combined with males killing newborn cubs ensured the number of leopards plummeted.

A 1992 survey estimated that there were under 20 leopards left, mainly high in the Negev mountains. In addition, the assumption was made that there were none left in the Judean Desert or in Ein Gedi.

However, sightings of an unknown male in the Judean Desert in 2001 by the Nature Reserves and Parks Authority, confirmed the Judean leopard was not extinct as previously thought.

“In recent years the authority has not kept a systematic leopard watch, but researchers from Tel Aviv University have in recent months intensified the watch. The leopard is almost exclusively a solitary cat; males and females come together to mate and then separate again. Each individual controls a territory of a few dozen square kilometers. Females typically have two cubs per litter and in most cases one reaches maturity. According to studies in Israel in the 1980s and early 1990s, leopards here feed mainly on ibexes (a form of wild goat) and hyraxes, but apparently they are exceptionally effective in hunting domestic cats. Only rarely do leopards succeed in bringing down a mature ibex, and if they do the feast lasts them several days” (Haaretz.com).

The most recent sightings were in 2014, when surveillance video from the Israeli Defense Forces, confirmed a leopard roaming freely in the northern part of the West Bank. “The spotting of a leopard roaming freely in the Samaria region was rare, as there are only a handful left in the wild in Israel. Most of the few known wild leopards are located further south, in the Judean Desert and Negev mountains” (Times of Israel).

The leopard is mentioned eight times in the Bible. The prophets Isaiah, Jeremiah, Daniel, Hosea, and Habakkuk, King Solomon and the Apostle John all refer to the wild cat in their canonized writings.

The first reference to the leopard by God’s sixth-era apostle, came in the fourth edition of the Plain Truth magazine in August 1934 in the lead article titled “Who Is the Beast.” God’s revealed understanding of the prophesied symbolism of the leopard would continue throughout his ministry. Mr. Armstrong went onto write the book Who or What Is the Prophetic Beast?, in which he details the leopard’s description in relation to the resurrections of the Holy Roman Empire. He would later have the leopard painted and repeatedly used on his World Tomorrow television programs to illustrate to viewers this vital end-time prophecy.

The animal is symbolized as “watching over cities” (Jeremiah 5:6). The idiom “a leopard can’t change its spots” is sourced from the old testament prophet (Jeremiah 13:23).

While in Babylonian captivity, God revealed to Daniel in a dream of a “leopard with wings” (Daniel 7:6). In his booklet Daniel Unlocks Revelation, Gerald Flurry writes, “This deadly leopard is Alexander the Great, who took 30,000 men and crushed the Persian Empire, which had a 350,000-man army!” Mr. Flurry refers to the leopard seven more times in that book in relation to the great beast power enslaving nations, even quoting from Mr. Armstrong in Who or What Is the Prophetic Beast?, which the Philadelphia Church of God won out of court in its battle against the Worldwide Church of God to maintain distribution of Mr. Armstrong’s most valuable written works.

Mr. Flurry has been inspired to refer to the prophecy about the leopard in his booklet on Hosea, regarding chapter 13, verse 7. He used it in describing the spiritual beauty of the Church in Song of Songs, from chapter 4, verse 8, which writes of the “mountains of the leopards.”

In his booklet on Habakkuk, Mr. Flurry describes how the Chaldeans are swifter than leopards and references Habakkuk 1:8. “A fierce, hungry nation is now rising on the world scene that will destroy and plunder the U.S. and Britain—and God’s Church that has gone off track,” he writes.

While in his very first book, Malachi’s Message, Revelation 13 is referenced regarding the Tribulation and the repentant Laodiceans’ rejection of Sunday worship. Verse 2 recounts how the great prophetic beast is like a leopard.

In Mr. Armstrong’s final written work, Mystery of the Ages, God inspired him to refer to the animal in regard to conditions during the World Tomorrow, when the leopard “shall lie down with the kid [goat],” which it has traditionally killed for food (Isaiah 11:6).

It is that prophesied soon-coming millennial World Tomorrow for which God’s true Church is now preparing. A time when the leopard-like beast power will have been destroyed by the returning Christ, and the Judean leopard will once more increase in population. With its instinct and appetite divinely changed, mankind will come to know not only the beautiful cat, but most importantly its supreme Creator.