PCG members: In addition to PCG Signposts, sign-up for the members-only Friday Philadelphian weekly email newsletter! Click here or email news@pcog.org ✖
Ready to Answer
How to show the hope that is in you
By Christopher Eames • Nov. 24, 2015 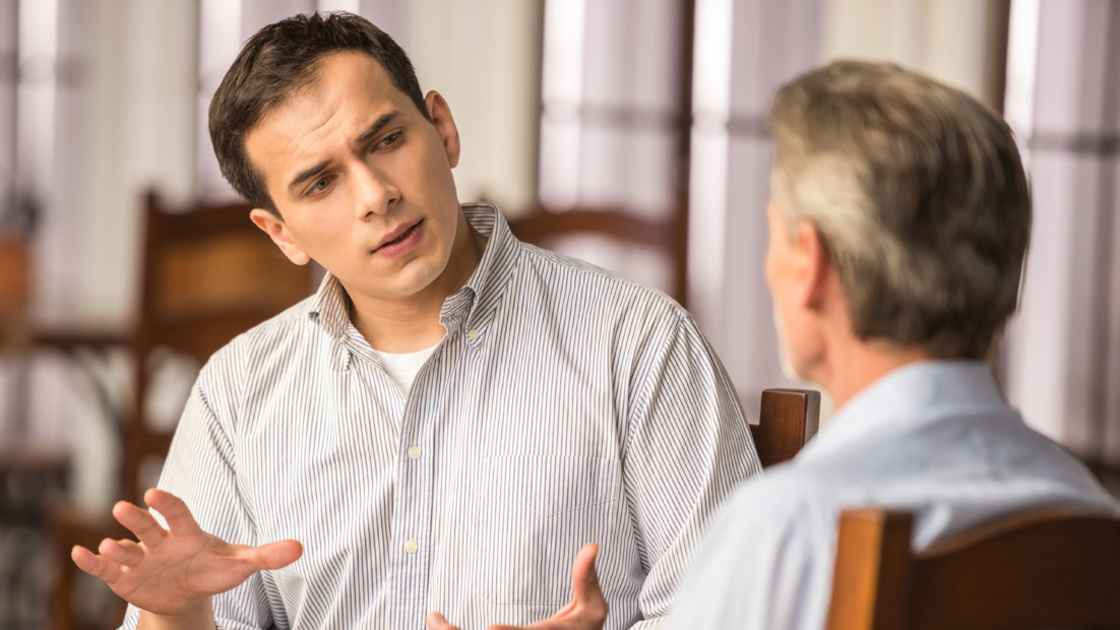 I grew up in New Zealand—a land where religion is, to a great degree, hushed. No one really talks about religion. You could almost say that it is considered shameful. It is the same story in Australia, and again, a similar story in England. It seems to be a wretched illness of the Ephraimite culture, which is why coming to America for college in 2010 was such a strange phenomenon for me. Every man and his dog there seems to freely discuss religion! It is a point of pride for many Americans—and it is refreshing.

But along with a public interest in religion comes the prospect of being questioned a great deal more about religious beliefs, something I really hadn’t had to deal with too much in New Zealand. You see, over there, if someone at school asked you about your beliefs, it was often in order to gossip about how “weird” and “different” you are. In such situations, it became easy to answer religious questions in an overly defensive manner. Perhaps you have felt that.

Honestly, how comfortable are you in talking to those in the world about your religious beliefs? It can be so easy to be apologetic—but that is just how Satan and his culture-conforming society wants you to be.

If I thought Americans were eager to talk about religion, wow, the Israelis took it to a whole new level. It seemed that, when I went to the Jerusalem excavation in 2012, the main topic of conversation between us and the Jews—if not the only topic of conversation—was religion. The diggers were keenly interested in our beliefs and wanted to learn more about these Sabbath-keepers who call themselves Christians. So we really had to be on the ball to answer their questions.

These people were actually interested in my beliefs—not just questioning me in order to gossip to the next person. I had to be more ready than ever before to give an answer to every man that asketh you a reason of the hope that is in you.

You probably have heard that verse, 1 Peter 3:15, often. At Herbert W. Armstrong College, it is a memory verse for students. How well do you apply this scripture? Think about yourself: Could you really answer any question that any man might ask you, founding your response in biblical support, leaving him without a doubt that your belief is rooted in the Bible—and thus unquestionable? It is a rare person who would be able to do that. But what are you doing now, and every single day, to strive to prepare yourself to answer any man who asks religious questions this way?

The third- and fourth-year speech classes at AC are called “Homiletics.” These classes are specifically designed to help men at the college prepare and deliver sermonettes and short Bible studies. Mr. Brian Davis was my teacher for both of these years—and I can safely say (if none of my other teachers read this article!) that I grew more in this class than perhaps any other at AC. We men indeed prepared and delivered a lot of sermonettes and half-hour Bible studies. But Mr. Davis emphasized that one day, either in this life or the next, we will become ministers for God. And as such, we will have to counsel people and be able to answer the questions they pose, quoting directly from the Bible. He wanted us to become so biblically grounded that we wouldn’t even have to open the Bible to answer questions posed to us. We needed to reach a point where we could recite the verses, or reference the scriptures in context, off the top of our heads.

Often he would call each of us up to the lectern, one at a time, to deliver a five-to-ten-minute impromptu speech on a certain doctrinal question, referencing certain verses in the Bible. Subjects ranged from: Do we believe in the immortal soul? to Third tithe—why do we pay it, where does the money go, and where is it commanded? to Isaiah 45:7—does God really create evil?

We would have to be prepared for anything! And more often than not, we would be stopped halfway through our miniature speeches, corrected by Mr. Davis for one or two heretical statements, and shown the proper way to answer these questions. It was a rare occasion for one of us to be able to effectively go up and deliver a message about one of these biblical subjects. Yet Mr. Davis continued to plug away at it—he could see the value in this exercise, and so could all of us. They were exciting classes to be a part of.

And so we lapped up everything that he taught us. We learned different techniques for answering questions, like putting a question back on the questioner—an effective tool. For example, the following conversation:

Bob: “Why must we still keep the commandments? Jesus did away with them, right?”

Fred: “Then you would obviously follow what he tells you to do. He says in John 14:15, ‘If ye love me, keep my commandments.’”

Another principle is that not every question should be answered. 2 Timothy 2:23 states: “But foolish and unlearned questions avoid, knowing that they do gender strifes.” I probably shouldn’t have responded to all of the antagonistic questions about religion that I received in New Zealand. Of course, it takes discernment to understand the intent. And I don’t want it to sound like every question I was asked in New Zealand was antagonistic. Sometimes we can wrongly assume the intent behind someone’s questions—and you certainly do not want to put anyone off by refusing to answer a candid question.

Most importantly of all: Be positive in your answers! Don’t be embarrassed or ashamed—that is just what Satan wants you to be. Embrace the fact that you are peculiar to the world, for that is exactly what God has called you to be (1 Peter 2:9). Be excited to answer questions. You never know whether or not God might be calling a person through you! 1 Peter 3:15 says to be ready always to give an answer. Why? So that people will see the hope that is in you! Really exude hope, excitement and joy in your answers.

This was something that the author of this epistle, Peter, had to struggle with. Before Jesus was captured and taken to be crucified, Peter asked, “Lord, why cannot I follow thee now? I will lay down my life for thy sake” (John 13:37). But Jesus replied to him, “Wilt thou lay down thy life for my sake? Verily, verily, I say unto thee, The cock shall not crow, till thou hast denied me thrice” (verse 38).

Reality set in for Peter after Jesus was taken captive and interrogated in court. A girl came up to Peter and asked, “Art not thou also one of this man’s disciples?” (John 18:17). “I am not,” Peter responded, embarrassed that this young woman had recognized him as one of Jesus’s followers. He then moved over to a fireplace and began warming himself next to the guards. They also were sure he had been with Jesus. “Art not thou also one of his disciples?” they asked him (verse 25). No. Again, he was embarrassed. Another: “Did not I see thee in the garden with him?” (verse 26). NO! “Peter then denied again: and immediately the cock crew” (verse 27).

How many of us have an attitude like Peter’s? It can be so easy to think gallant thoughts of clinging to the truth right until the last bitter breath. But reality is another thing. Are you embarrassed to be a part of the Church? Are you embarrassed by what the Bible, the mind of Jesus Christ in print, teaches you? Are you ashamed by it? Do you answer questions as if you are? Peter had to learn a hard lesson that night. He went on to prove his devotion to God and Christ, though, in giving the ultimate sacrifice as a faithful martyr.

Jesus was the perfect example of embodying the command in 1 Peter 3:15. Luke 2:46-47 describe the scene Joseph and Mary came across when they found Him in the temple, after He had been missing for three days. “And it came to pass, that after three days they found him in the temple, sitting in the midst of the doctors, both hearing them, and asking them questions. And all that heard him were astonished at his understanding and answers.” Jesus, at 12 years old, was readily able to answer these men of the hope that was in Him (verse 42). That is our example! We all have a long way to go though. How can we learn to answer questions so readily and so eloquently?

It simply comes down to Bible study—lots of it. We study to show ourselves approved (2 Timothy 2:15), not being ashamed of what we believe because by diligent study, we have proved it to be the truth! Search the scriptures daily like the Bereans did (Acts 17:11). Malcolm Gladwell’s Outliers says it takes about 10,000 hours at an activity in order to become an expert at it. Our job is to teach the Bible to all who have ever lived. How well do you know it? How ready are you to teach it? Your readiness is reflected in how you answer questions now about the hope that is in you. Set out a schedule to study the Bible. Don’t just crack it open and begin reading. Make it a goal to study certain doctrines, cross-reference verses in your margin with a Bible pen—and it doesn’t hurt to memorize scriptures as well. Put together a list of doctrines, writing beside each one the matching scriptures, so that you are easily able to reference them when explaining those doctrines.

On top of frequent, diligent study of the doctrines contained within the Bible, prayer is a must. You can go into each day asking God to prepare you to answer any questions you may be asked about your beliefs.

It just takes hard work and time. Pray about it. Study it. Don’t be embarrassed about what you believe in—be proud of it. That way, when “[T]en men shall take hold out of all the languages of the nations, even shall take hold of the skirt of him that is a Jew [you], saying, We will go with you: for we have heard that God is with you” (Zechariah 8:23), you will be ready to answer.