The Costly Price of Sin
The Passover teaches that unless we mourn the death of Christ, we will not go on to build a relationship with God.
By Timothy Oostendarp • March 2012 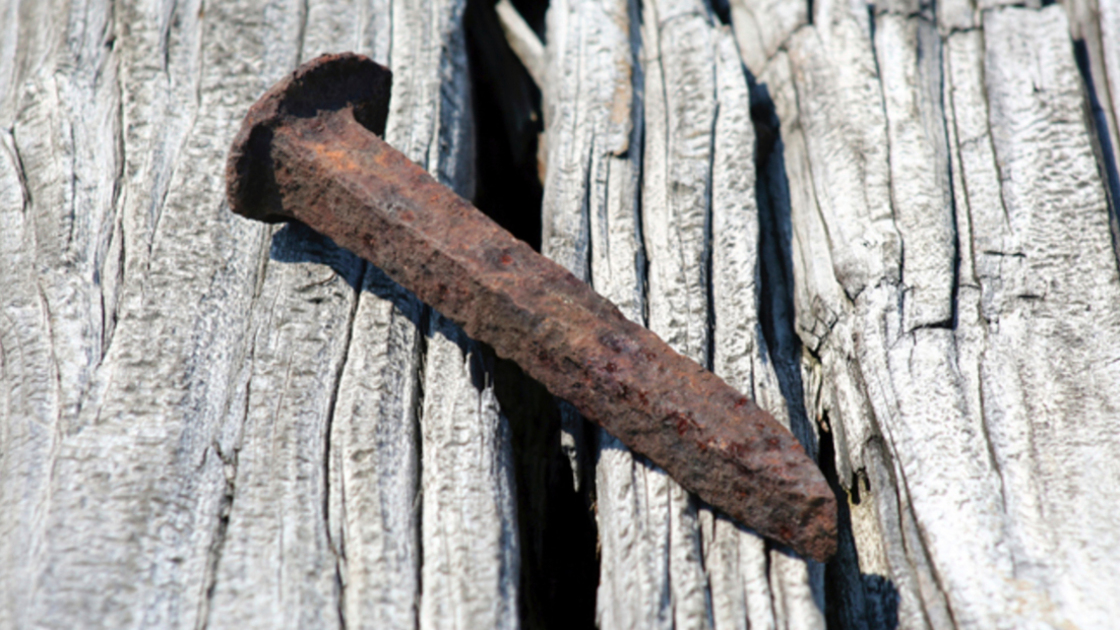 All day the city was abuzz with excitement. The spring holy days had arrived, and Jews from across the Roman Empire had swarmed to Jerusalem. Adding to the festive atmosphere was the ardent hope of catching a glimpse of the man named Jesus—a folk hero to the common Jew.

It was now the night of Nisan 14, and a crisp darkness had lowered on the city. And except for a few flickering lights seen across the Kidron Valley, the city slept.

Shifting his focus from the temple precincts, Peter looked over to see James and John fast asleep. Exhausted, he would soon be joining them.

Meanwhile, at the home of the high priest, eminent members of the Sanhedrin wrapped up the final touches of a dastardly plan to murder Jesus (Matthew 26:3-4). Armed guards of the high priest prepared to accompany Judas Iscariot to the Mount of Olives. There, he would betray Christ into the hands of His murderers.

Thus, in the wee hours of the morning, Wednesday, Nisan 14, a.d. 31, the stage was set for the bloody sacrifice and crucifixion of Jesus Christ.

Every year, God’s children memorialize these events. It’s important to make sure we have the right focus: that we consider the costly price for sin.

The Body of Jesus Christ

Just a stone’s cast away from where Peter and the other disciples lay sleeping, Jesus knelt and prayed, saying, “Father, if thou be willing, remove this cup from me: nevertheless not my will, but thine, be done” (Luke 22:42).

As soon as He finished praying, an angel of God strengthened Him. The great weight of what Jesus knew lay in store—the beating, torture, crucifixion and spearing—was taking a toll.

Jesus was doing everything He could to stay in control of His thoughts—to not be anxious—to not sin. In Luke 22:44, we read that Jesus Christ sweat blood!

Vine’s Expository Dictionary states that “‘agony’ was used among the Greeks as an alternative to agon, ‘a place of assembly’; then for the contests or games which took place there, and then to denote intense emotion. It was more frequently used eventually in this last respect, to denote severe emotional strain and anguish” (emphasis added).

Jesus was in a contest against sin—straining to concentrate and submit Himself to the will of the Father—to be our unspotted Passover Lamb!

Editor in chief Gerald Flurry wrote, “Christ’s sweat actually contained some blood in it! Drops of blood oozed out of the pores of His face because He was thinking about that terrifying beating and suffering He had to go through” (Royal Vision, March-April 2010).

The instances of men or women sweating blood are extremely rare, with the documented cases mostly involving the extreme anxiety of an impending death.

It is noteworthy that once blood vessels rupture around sweat glands, these areas become hyper-sensitive to pain. Remember, Jesus was hit in the face and head at the home of the high priest, during His scourging at the hands of the Romans, and even had a crown of long thorns mashed into His head.

Considering these intense moments of prayer, Mr. Flurry asked: “Have you ever been full of heaviness? God tries us and He tests us. He wants us to sacrifice for the world and learn how to submit to His will as Christ did. … If we are not careful, we can get caught up in our own trials and think, Why is God so hard? But we need to think of Christ’s sacrifice for us” (ibid).

Trials seem to come in bunches at this time of year. God encourages everyone to look to the suffering of Christ and to model their behavior after Him. Christ overcame by drawing on the power of God. God the Father lived in Christ!

Matthew 27:26-31, Mark 15:15-20 and John 19:1-5 recite how Pilate had Jesus scourged. Jesus’s scourgers called together the other members of the Roman band, 600 soldiers or so, to witness the event. Psalm 22 gives us insight into what Jesus was thinking during this atrocious bludgeoning. The Romans called it the half-death.

Notice Psalm 22:12-15, Isaiah 52:14 and Isaiah 53:4‑5. As Jesus Christ looked about, He was surrounded by hundreds of jeering and sneering men. They were egged on—if not possessed—by Satan and the demons. They viciously destroyed Christ’s body.

A while ago there was a television program on the History Channel where a man built similar flogging devices to the ones the Romans are known to have used. The devices effortlessly shredded the hard plastic of soda-pop bottles and gouged metal.

At the end of His scourging, Christ’s body was demolished. This was the cost of our physical sin. Through this sacrifice we can claim the gift of physical healing. Do we have faith in this sacrifice?

The Blood of Jesus Christ

After His half-death scourging that left Him totally unrecognizable, Jesus was delivered back to Pontius Pilate. There, He was condemned to death.

From Fort Antonia, Jesus was led a short distance away to Golgotha to be crucified.

Once led to this spot, Christ was stripped of His seamless garment and laid down on a stake. There, He was systematically nailed to this piece of wood.

They then lifted up the stake and dropped it into a deep hole. The pain from the drop would have been like lightning in the mind. So began the last few excruciatingly painful hours of Jesus’s life.

A number of medical theories have been proposed giving insight into some of what Jesus Christ might have experienced on the stake.

Based on his medical expertise, C. Truman Davis, M.D., wrote the following opinion in Arizona Medicine, March 1965: “As He slowly sags down with more weight on the nails in the wrists, excruciating, fiery pain shoots along the fingers and up the arms to explode in the brain—the nails in the wrists are putting pressure on the median nerves. As He pushes Himself upward to avoid this stretching torment, He places His full weight on the nail through His feet. Again, there is the searing agony of the nail tearing through the nerves between the metatarsal bones of the feet. At this point, another phenomenon occurs. As the arms fatigue, great waves of cramps sweep over the muscles, knotting them in deep, relentless, throbbing pain. With these cramps comes the inability to push Himself upward. Hanging by His arms, the pectoral muscles are paralyzed and the intercostal muscles are unable to act. Air can be drawn into the lungs, but cannot be exhaled. Jesus fights to raise Himself in order to get one short breath. Finally, carbon dioxide builds up in the lungs and in the blood stream and the cramps partially subside. Spasmodically, He is able to push Himself upward to exhale and bring in the life-giving oxygen.” This gives some insight into typical physical reactions to crucifixion.

As Jesus hung on the stake, He forgave His persecutors, encouraged a man crucified beside Him, and gave some final instructions to John. He maintained His intensive and exemplary God-Family focus, even in the most excruciating circumstances.

Notice the narrative in Matthew 27:37-50. Jesus Christ endured persecution, reviling and insults. He could have easily come down from that stake if He wanted to, but He knew that a costly price needed to be paid for the sins of the world! 1 Corinthians 15:22 says, “For as in Adam all die, even so in Christ shall all be made alive.”

Verses 49-50 of Matthew 27 include a mistranslation. The Moffatt translation includes the following at the end of verse 49: “Seizing a lance, another pricked his side, and out came water and blood.” John 19:33-34 should also read: “But when they came to Jesus, and saw that he was dead already, they brake not his legs: But one of the soldiers with a spear [had] pierced his side, and forthwith came there out blood and water.”

This was the end of Christ’s life. He died.

Mr. Flurry wrote: “Satan deceived this world into thinking that Jesus died of a broken heart. Christ died because a spear was rammed into the side of His body and His blood gushed out. That is why He died. Christ went through this so your sins could be forgiven. All of this is pictured by the Passover” (op. cit.).

The murder of the Son of God was the costly price paid for spiritual sin. Through this sacrifice, we receive the free gift of salvation. Do we have faith in this sacrifice?

The last 24 hours of Jesus Christ’s life were filled with unimaginable horrors. He was betrayed by Judas, abandoned by all the disciples, beaten with stripes until He was unrecognizable, and then mercilessly crucified.

He did all this to reconcile us to the Father and that we might be partakers of eternal life.

The Passover teaches that unless we mourn the death of Christ, we will not go on to build a relationship with God (Zechariah 12:10-12).

In the last moments of His physical life, as God turned His back on Christ, the most important moments in the history of the universe took place. Jesus Christ became sin—for us. We should thank God deeply for that!

To take the Passover in a worthy manner is to highly esteem what God and Christ did for us, and to make sure we are at one with them, our sins are forgiven, and our faith is unshakable in what the symbols represent.

Be sure to prepare to take the Passover in a worthy manner. Consider the costly price of sin, and draw close to God.