Lessons From History: Failure Is Not an Option
The Apollo 13 crew’s response to catastrophe
By Abraham Blondeau • April 1, 2014 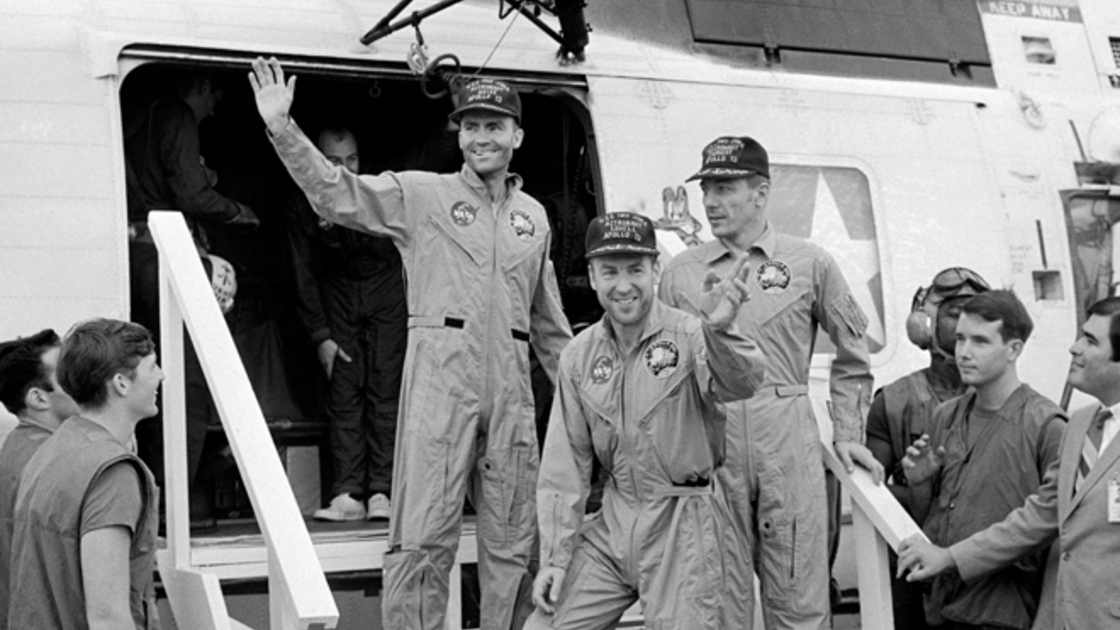 Three men were 200,000 miles away from home—and traveling at 24,288 feet per second. They were running out of oxygen. Their spacecraft had no power. They would not be landing on the moon, and they might not make it back to Earth.

The odds were stacked against Mission Control in Houston to bring back Apollo 13 after a catastrophic technical failure crippled the vessel. It seemed like an impossible mission; indeed on paper it was. Never before in the history of manned space flight had Gene Kranz, a veteran Korean War pilot and flight leader of Mission Control, and his team faced such a dramatic challenge. They had guided men into space for the first time; they had guided men to the moon, but nothing like this. Success meant the survival of three friends and astronauts; failure meant their death.

In 1969, nasa had successfully answered President John F. Kennedy’s challenge to land a man on the moon by the end of the decade. Apollo 11 and 12 both had been successful missions, and the next mission in the Lunar Program was on its way.

Jim Lovell, Fred Haise and Jack Swigert were 55 hours into the mission with only one minor technical difficulty when an engine in the Saturn v rocket prematurely shut off on liftoff. It seemed like a normal mission as the men were nearing the moon. Mission Control told Lovell that they were “bored to tears.” That would not last much longer.

At 55:55 into the flight, Mission Control told Apollo 13 to do a cryo stir on their oxygen tanks; this allowed Houston to gauge how much supercooled liquid oxygen was left in the tanks. Eighteen seconds passed after Swigert started the process. Then came the event that would change their mission from lunar landing to survival mission.

An explosion from a spark in the high-pressure oxygen and hydrogen tanks sent the spacecraft spiraling toward the moon. The three astronauts heard huge bangs and blasts as their vessel experienced a catastrophic failure. Swigert said the famous words “ok, Houston, we’ve had a problem here.” However, no one knew how serious the damage truly was. The three-crew members believed a meteorite had struck the Lunar Module (lm); Mission Control thought it was an instrumentation problem.

It took Mission Control 15 precious minutes to determine what the issue was. They were losing all three oxygen tanks for the Command Module (cm), they had lost their main engine, they were losing electrical power, and they had lost vertical thrusters; almost every major system on the ship was in danger of being lost, along with the three astronauts. Gene Kranz then took control of the situation. He knew drastic, accurate and precise action had to take place to restore the situation.

After the controllers had stabilized the situation by having the astronauts move to the lm from the cm, using it as a lifeboat, he asked for his “White Team” to meet in the main meeting room downstairs from the mission control room. Once the entire team was assembled, he had before him the greatest and brightest engineers America could offer—the sum total of technical knowledge and experience nasa could muster. Kranz laid out the task before them: finding a way to bring the men home.

“Okay, listen up. When you leave this room, you must leave believing that this crew is coming home. I don’t (care) about the odds and I don’t (care) that we’ve never done anything like this before. Flight control will never lose an American in space. You’ve got to believe, your people have got to believe, that this crew is coming home. Now let’s get going!” (Failure Is Not an Option, Gene Kranz).

Later Kranz would declare to his team: “Failure is not an option.”

The remaining five days in the mission would be some of the most stressful and danger-filled days for Apollo 13, but they would also be some of the greatest achievements in American aeronautic engineering. No matter how complicated or difficult the task, Kranz’s team was able to innovate and find a solution. Whether it was creating a new air filter out of duct tape, a sock, and some plastic bags, or creating a new system of manual orientation using the sun and the moon, or finding a way to keep the three astronauts alive on 12 amps of electricity—barely enough to run a vacuum cleaner—the Flight Control Team had the flight plan covered.

Each man would be forced to stay up for days at a time to process data, run formulas, run simulations and relay the information up to Apollo 13. The astronauts’ only link home was the constant instructions coming from Houston. The temperature on board dropped to 38 degrees Fahrenheit, and Haise contracted a kidney infection. For them to get home, they had to pass in at the correct angle in Earth’s atmosphere: too steep, and they would be incinerated; too shallow, and they would skip off the atmosphere, stuck in an orbit around the Earth that could never be corrected.

The moment of truth came on April 17, 1970. After failing to regain contact at the expected time, all of their blood, sweat and tears were rewarded. The Command Module splashed down gently into the Pacific Ocean near Samoa.

They had accomplished the impossible! They did not fail their mission, but overcame every obstacle through hard work, innovation and perseverance. You the reader have the same mission in life.

You and I are tasked with an impossible task as well; we must be the best spiritual problem solvers in the history of mankind, as we face tremendous pressures and the worst of times in the human experience. But as we survey our individual lives and realize where our course needs to be corrected, where we need to find a solution to stay on course, we need to have the same resolution as Kranz and take control of the situation, realizing that failure is not an option.

We all face tremendous trials—maybe you are going through one right now—but realize that God gives us the best problem-solving tool. God has given us the formula that can solve any issue, and will work every single time: God’s eternal law, the Ten Commandments. If you apply the law to any problem in your life, just as Apollo 13 applied all the procedures sent from Gene Kranz and Mission Control, you will overcome!

Your decisions have the ultimate consequences for your own life, and even those around you, but remember that it doesn’t matter what the odds are, or if you have not been able to overcome it before, if you use courage, determination and God’s holy and righteous law, you will succeed—and failure will never be an option.