HWA in Sweden
In the closing pages of chapter nine of Mr. Armstrong’s most requested book, he reminds Sweden they are one of the lost ten tribes of ancient Israel.
By Gareth Fraser • Oct. 20, 2015 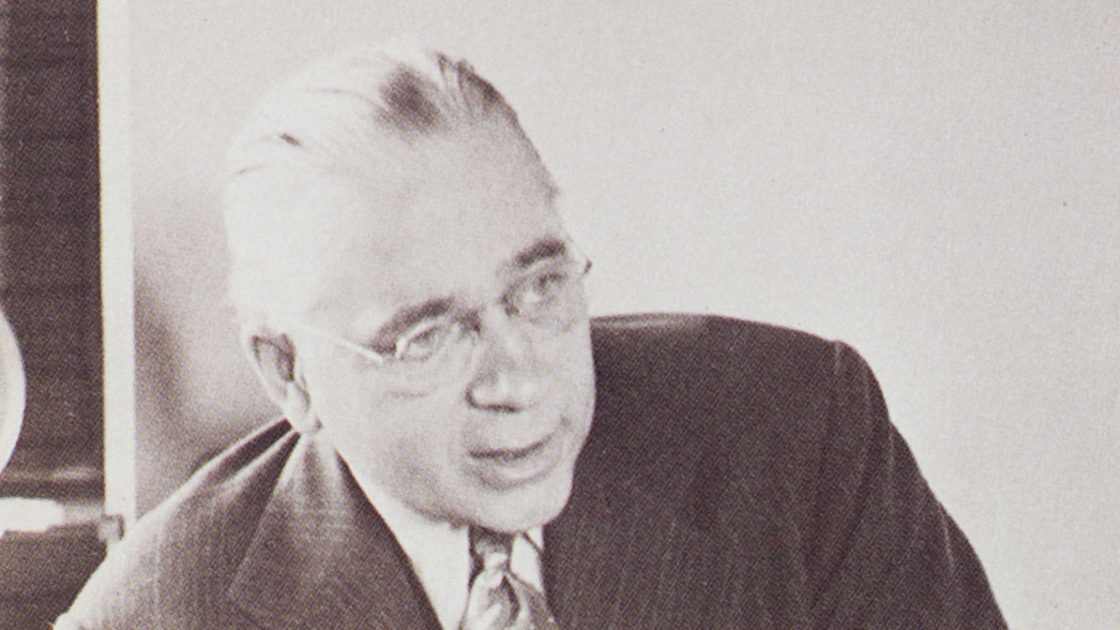 The Scandinavian nation of Sweden is comprised of 9.5 million people. It’s geography is comprised of thousands of islands connected by an array of bridges and ferries for transportation. Inland lakes, lush forests and elevated mountains accentuate the country’s beauty.

The eastern capital Stockholm faces the Baltic Sea, Gulf of Bothnia and Gulf of Finland. The capital houses royal palaces, sprawling parklands and historic museums. It’s other major cities are southwest in Gothenburg and Malmö, located on the coast with access to the North Sea.

The nation is governed by a parliamentary representative democratic constitutional monarchy. It is strategically vulnerable to the communist Russian Federation, its former Soviet satellite states, and European democracies, all of which surround it. It is currently a European Union member but opted out of the euro currency.

The God inspired voice of the Philadelphia era began to be heard via the World Tomorrow broadcast in 1953 on Radio Luxembourg in English, then Russian on Radio Monte Carlo in 1959 (Matthew. 24:14). Up to that time isolated members scattered across Scandinavia would travel to Stockholm to attend Sabbath services.

By the early 1970s, circulation of the Plain Truth magazine which Mr. Armstrong founded in 1934, had doubled. Ministerial visits from the British regional office provided both counsel and preaching by way of bible studies conducted in the capital city.

Mr. Armstrong was scheduled to travel to Stockholm on February 5, 1975, and again in August for a meeting with Swedish royalty. However, due to more pressing commitments with Japanese and Israeli officials regarding an Ambassador College co-sponsored archaeological dig in Jerusalem, and a royal meeting with the Prince and Princess of Monaco, he was unable to visit Sweden.

Yet God made an impact upon the royal family when in 1977 “…a Church member and 1964 graduate of Ambassador College, Bricket Wood, was invited to a reception during a state visit to Britain by King Carl XVI Gustaf of Sweden” (Worldwide News, Feb. 28, 1977).

In August of the same year a teenager from Sweden attended the church’s Summer Educational Program (SEP) on the former England campus grounds of Ambassador College in Bricket Wood, which had closed three years prior.

In 1978, the first Swedish Feast of Tabernacles was held in the middle of the country on the shores of Lake Vatter at the Hotel Bellevue in the town of Hjo (pronounced You). Messages were delivered in English and simultaneously translated for Swedish members.

In Bejing on December 2, 1979, Arne Björnberg, Swedish ambassador to China, attended a testimonial dinner in Mr. Armstrong’s honor which was comprised of 400 leaders featuring 76 officials from other nations. He was “…the first church leader from the world of Christianity to officially visit and speak with top officials inside the People’s Republic of China” (ibid. Dec. 24, 1979). It was during that testimonial dinner that discussions took place with the Swedish ambassador regarding the various invitations from private and charitable organizations in his country.

In the Pastor General’s Report Mr. Armstrong wrote to the ministers of the Church April 3, 1981. “Right now the situation is tense in Poland. It is reported the Soviet forces are poised ready to strike in Poland. And April is the best month in the year or a Soviet military invasion in massive form. The Poles are tensely alerted. They might move even faster than the slower-moving Russian Bear. They might, under the Polish Pope, start the long-prophesied revival of the medieval “Holy Roman Empire.” For some time now, I have foreseen the possibility of this revived “Beast” power being almost half from Russian satellite nations, such as Poland, Romania, Yugoslavia, Bulgaria, Czechoslovakia, Hungary–instead of the Israelitish northern European nations such as Sweden, Norway, Denmark, Holland, Belgium. They were not in the old Roman Empire–but these Balkan nations were!”

By the middle of that year church members were receiving monthly visits from British based ministry. “During the July 17 services the brethren sang Swedish translations of five hymns from the Church hymnal, their first opportunity to sing them in their native language” (Worldwide News, Aug. 30 1982).

By January 1983 Plain Truth circulation in the country was 3,524. In June of the same year the Swedish edition of Readers Digest featured an advertisement written by Mr. Armstrong entitled, “The Peril to Your Life Grows.”

“World troubles are fast increasing!” he wrote to the Swedes. “We are the first generation on earth to have nuclear and other weapons of mass destruction that can erase all human life.

“Think! This twentieth century has produced awesome progress, but also appealing evils. Why? Where is this perplexing paradox taking us? Only Bible prophecies can reveals the down-to-earth truth, yet almost no one understands!

“Governments can’t solve world problems or bring world peace. Science and technology have solve no troubles, but have produced frightening weapons to destroy mankind. Religions have brought no world salvation or universal happiness, but have fought numerous wars.

“Yet more than twenty million people worldwide, in six languages, are keeping informed on the real meaning of world events, what’s coming next, and how we will survive. They look forward eagerly every month to The Plain Truth, the world’s fastest growing and most unique magazine, well illustrated in full colour, a magazine of understanding. The Plain Truth is available to you, absolutely free, with no subscription price, upon your own request. Nothing to join. Nothing to sell. You, too, can understand the meaning of today’s world news from Bible prophecy as none but The Plain Truth can make it clear. No obligation, no follow-up” (ibid. July 11, 1983).

Although few in number the members remained steadfast (Matthew. 18:20). “To attend services some travel great distances. For example, those in Gothenburg must travel 250 miles (400 kilometers) to Stockholm, which is from one side of Sweden to the other” (ibid. Dec. 5, 1983). The past three decades had seen a dramatic drop in the number of citizens belief in God. “A government poll in Sweden found that only 48% believe any concept of God, compared with 80% of Swedes who believed in 1947” (Pastor General’s Report Dec 30, 1983).

Despite this rise of Godlessness the delivery of His gospel message increased in its intensity. Mr. Armstrong sent the Plain Truth News Editor to Stockholm to attend a Conference on Confidence and Security-building Measures and Disarmament in Europe. The event featuring officials from 35 nations, took place in the Kulturhuset conference building.

“The conference was convened to deal with rather small and technical items, such as the notification of troop maneuvers on both sides of the Iron Curtain. It is hoped that such so-called “confidence-building measures,” if agreed upon by the delegations that are to carry out the task over the next two to three years, can lead to implementing solutions to more significant East-West issues” (ibid. Jan 27, 1984).

By May of the same year another Scandanavian Readers Digest ad campaign reaped 12,894 responses. The ad featured a response card rather than the previous coupon style insert. “Dagen, the leading religious newspaper in Sweden, wrote in its March 23 issue, “Many also in Sweden have through the years read the colorful and interesting magazine that [the Worldwide Church of God] publishes. There is no advertising in it, and the articles often cover interesting questions on life. Elegant color pictures and other picture material illustrate the not cheaply done magazine. …The article mentioned the Worldwide Church of God is the only true announcer of Christian belief today”” (Worldwide News, March 30, 1984).

By August of that year, subscribers from Sweden requested either the English or Norwegian language versions of the Plain Truth magazine and helped boost Scandinavian circulation to 34,634. The sharp rise of 27.8% over 1984 was a result of the consistent advertising in Norwegian, Danish, and Swedish periodicals. An autumn campaign was also planned with a goal of reaching 50,000 subscribers by the end of the year. Swedish Good News readers contributed to a 138% increase in Scandinavian circulation over the previous year.

In 1985 a summer media blitz featured two million four-color inserts appearing Swedish publications. By the end of July circulation was 4,400 and Church membership was 17.

On April 25, 1988, at the invitation of Los Angeles Mayor Tom Bradley, whom Mr. Armstrong had met numerous times and visited Ambassador College, the Young Ambassadors performed for King Carl XVI Gustaf and Queen Silvia at the Century Plaza Hotel. The performance was part of an entertainment program at a dinner honoring the king and queen. Los Angeles Mayor Tom Bradley was host” (Worldwide News, May 16, 1988).

Ten months later God began revealing Malachi’s Message to Mr. Flurry. On December 7, 1989 God moved His lamp stand to His Philadelphia Church. By 1996 Mr. Flurry had authorized the printing and distribution of the United States and Britain in Prophecy. In 1996 the PCG faced off against the Worldwide Church as we entered into what would become a six year life and death legal struggle over God’s revealed truth to His sixth era Apostle.

In the closing pages of chapter nine of Mr. Armstrong’s most requested book, he reminds Sweden they are one of the lost ten tribes of ancient Israel. “They, too, have been blessed with a good measure of material prosperity—but not the dominance of the birthright. …The political boundaries of Europe, as they exist today, do not necessarily show lines of division between descendants of these original tribes of Israel.”

Those in Sweden reading the Trumpet magazine and watching the Key of David can be inspired by the past two decades of reporting and analysis featuring the unquenchable light of bible prophecy. As God’s Apostle in the Laodicean era Mr. Flurry continues the restoration of the publishing, broadcast, and humanitarian legacy of Mr. Armstrong. As he declared in his inaugural book, “[B]e assured the work of Mr. Armstrong will never die. God’s end-time message from Malachi will go out. The Work will continue.”