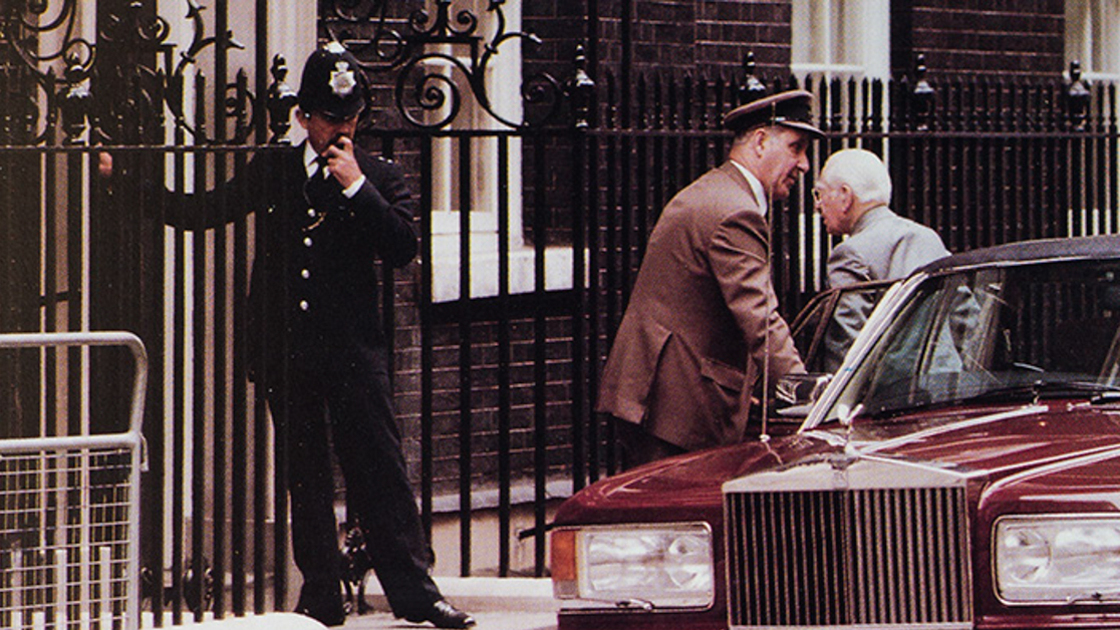 “We’re almost there,” proclaimed the chauffeur. The morning sunshine glistened off the body of the classic Rolls Royce as it passed by St. James Park, the Houses of Parliament and Buckingham Palace en route to Westminster.

As anchor of the World Tomorrow program on both radio and television, Herbert W. Armstrong’s face and voice were often recognized in Britain. The wide circulation of millions of readers for the Plain Truth magazine, along with knowledge of Ambassador College in Hertfordshire county, its immaculate campus in the village of Bricket Wood, home to the famed Hanstead House, also contributed to wide recognition of this ambassador for peace.

Upon being greeted by Mrs. Thatcher’s aide, Mr. Armstrong was ushered upstairs, joining the prime minister in the White Room at Number 10. Today, this room still owes its decor to Margaret Thatcher, who employed noted British architect Quinlan Terry to ensure it kept its 18th-century drawing room motif, with fine furnishings and masterpieces of artwork echoing the British aristocratic tradition. World leaders and dignitaries who have visited Number 10 are familiar with this spectacular space.

In the White Room, “the pastor general had a 30-minute meeting with Mrs. Thatcher, whom he found to be a cordial hostess. Sir Robert Armstrong, secretary to the British cabinet, was also in attendance” (ibid). Sir Robert is the son of Sir Thomas Armstrong, a prominent British musician who was the principal of the Royal Academy of Music from 1955 to 1968. Sir Robert was educated at Eton College and was a King’s Scholar who attended Christ Church at the University of Oxford. From 1970-75 he served as private secretary to the prime minister and was knighted in 1978. From 1979-87 he served as secretary to the cabinet, being honored with a life peerage in 1988 as baron of Ilminster in Somerset county. Today, he is still active in the United Kingdom Parliament as a crossbencher in the House of Lords.

This past December 30, I asked Lord Armstrong about his namesake’s visit with Lady Thatcher, to which he recalled, “I remember that there was a meeting; it immediately followed another meeting which I had with the prime minister earlier that morning, and the prime minister invited me to remain for her meeting with Mr. Armstrong. Perhaps she was intrigued by the idea of bringing two Armstrongs together!”

With events so fresh from Britain’s Falkland Island victory over Argentina, along with reverberations of Lebanon’s war with Israel, geopolitical foreign policy topped the conversational agenda during Mr. Armstrong’s visit to Mrs. Thatcher. Earlier that month, on July 11, Mr. Armstrong had met with Jordan’s King Hussein, at the Royal Palace in Amman. “Mrs. Thatcher had met with King Hussein July 22, and Mr. Armstrong and the prime minister discussed their visits and the situation in Lebanon” (Worldwide News, op. cit.).

Today, like Lord Armstrong, Lady Thatcher holds a life peerage of the realm as Baroness Thatcher of Kesteven in Lincolnshire county and is thus entitled to sit in the House of Lords. With its once great empire—the greatest this world has ever known—long gone, Britain is becoming an increasingly isolated isle politically, economically and spiritually. Since Margaret Thatcher’s resignation following betrayal by her own government ministers in November 1990, British leadership has simply lacked the “graciousness” and “resolute will” displayed by her during her terms as prime minister. Those qualities of her leadership were but a final reflection of the traits of leadership that were once displayed by British leaders during the nation’s prime period of national blessings. The very blessings granted fulfillment at that time by God in accordance with the birthright and scepter promises He bestowed upon the British peoples as the biblical descendants of the ancient patriarch Abraham, through the lines of Judah and Ephraim.

The spotlight of the world stage centers now on its prime actor of the moment, Germany, with its accelerated domineering power over all Europe. Although it still remains a member of the European Union, Britain’s recent refusal to sign on to Berlin’s plan to meld submissive economies into the form of its own fiscal mold is leading to an unprecedented isolation of the island realm from Europe. Since 1934, Mr. Armstrong relentlessly prophesied of Germany’s rise to dominance in Europe, guided by its spiritual mother in Rome. In the same vein, he prophesied that Britain would not be part of the final 10-nation combine that will ultimately dominate Europe under the leadership of Berlin and Rome.

Trumpet founder and editor in chief Gerald Flurry writes in his latest personal, “In 1995, as the European project was gaining steam, Margaret Thatcher said this: ‘You have not anchored Germany to Europe,’ which was the plan behind European unification. ‘You have anchored Europe to a newly dominant, unified Germany. In the end, my friends, you’ll find it will not work.’ Mrs. Thatcher was absolutely correct!”

The lords, the ladies and the gentlemen of Britain and its Anglo-Saxon dominions have forgotten Mrs. Thatcher’s warning. More perilously, they have forgotten the message of Jesus Christ their Savior and His gospel of the Kingdom preached in all the world as a witness by that ambassador for world peace, Herbert W. Armstrong (Matthew 24:14).

As a message of hope during the dark days of war, Winston Churchill voiced English historian Thomas Fuller’s proverb: “It’s always darkest just before the day dawns.” So it is that, in the short term, the prophesied demise of Britain, and the ultimate subjugation of its peoples under the worst of German ambitions is absolute (Hosea 5:5; Isaiah 10:5-7). However, we thank God that these future darkest days of the British peoples will be short lived. The day will come when the British and the Germans will live at peace with each other. For, as the prophecies declare, and as reflected in the great chorus in Handel’s Messiah sung annually in Britain since 1743, together with all humankind they will see a bright new day dawn in the fulfillment of the great prophecy of Revelation 11:15 and hear “great voices in heaven, saying, The kingdoms of this world are become the kingdoms of our Lord, and of his Christ; and he shall reign for ever and ever.”