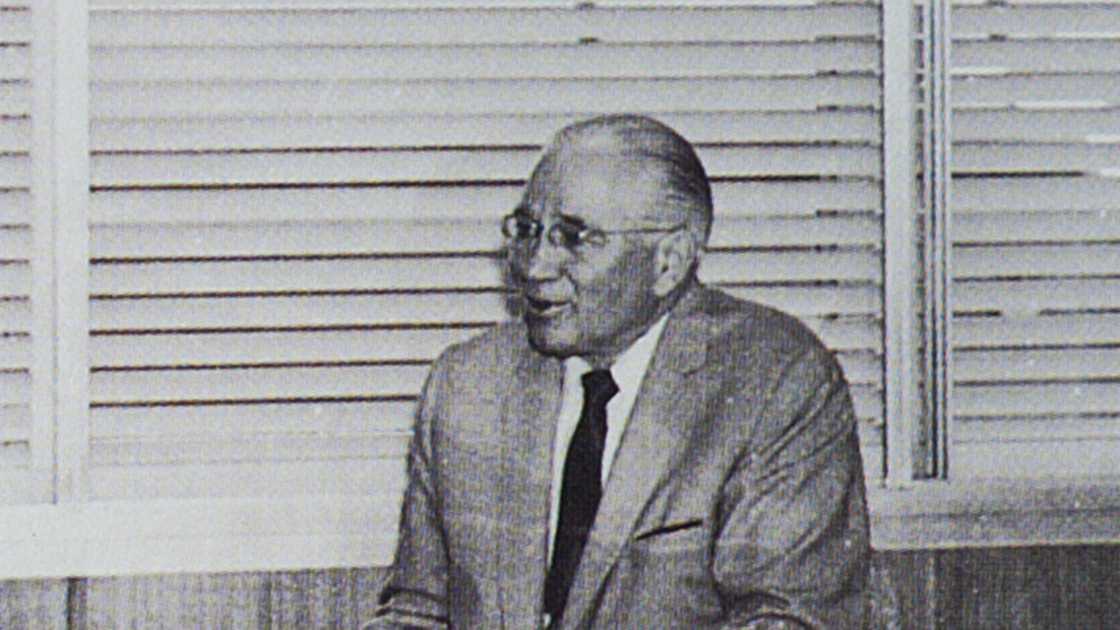 Snow fell on the morning of Monday, Feb. 27, 1984. On Sunday, Herbert W. Armstrong had landed at the National Airport in Washington, d.c., to clear skies and sunshine.

Despite the snow, Mr. Armstrong was driven to the Hart Senate Office Building in downtown Washington. Located northeast of the Capitol, the 1.27 million square-foot building remains the largest of the three office buildings dedicated for use by United States senators. He had an 11 o’clock meeting scheduled with California Sen. Pete Wilson.

“Upon entering the Hart Building, Mr. Armstrong was recognized by one of the security guards. She said she watched Mr. Armstrong on television and enjoyed his programs. She asked the pastor general to autograph a copy of the April Plain Truth” (Worldwide News, March 12, 1984).

Mr. Armstrong continued on to his meeting with Senator Wilson, who had flown in from Honduras the night before.

“In the cordial half-hour meeting, Mr. Armstrong explained the activities of the Ambassador Foundation. Mr. Armstrong’s talk was interrupted several times by buzzing sounds, which the senator explained was a code system to announce whether a Senate proceeding was coming up for a vote, how many minutes a senator had in order not to miss the vote, or whether a role call was about to take place. The Senate buildings are connected by subways, which allow rapid access to other government buildings” (ibid).

At the meeting’s conclusion, Mr. Armstrong and Senator Wilson were photographed together. What the two men did not know at the time was that within two years Mr. Armstrong would be dead, and five years following that the senator would become the 36th governor of the state of California.

Pete Barton Wilson was born Aug. 23, 1933. He attended Yale from 1952-56. From 1956-59 he served as a platoon commander in the United States Marines. Then it was back to student life from 1960-62 at the University of California–Berkeley School of Law. His rise through the ranks of local, state and national government began seven years later. From 1967-71 he served as a state assemblyman; from 1971-83 he was mayor of San Diego, before his election as a senator, which he served in from 1983-91.

During his tenure as governor (1991-99), Governor Wilson is remembered for his insistence upon budget discipline, which aided in the state emerging from economic recession. His life in government has been an effort in trying to solve systemic problems.

Today, still living in Los Angeles with his wife, Mr. Wilson works as a consultant as he nears his 82nd year. Both California and the Capitol have seen much change since his time in office. He has been witness to the continued devastating drought, economic and moral malaise in his home state. Federally, he has witnessed two terms of a rush toward the morals of Sodom and the economics of ancient Rome (Jude 7).

Perhaps in his quieter moments at home, he recalls his meeting that snowy day in Washington with a white-haired patriarch heralding the good news of the gospel of the soon-coming Kingdom of God (Matthew 24:14).

While Mr. Wilson served as an assemblyman, Mr. Armstrong began an intensified personal delivery of God’s gospel to world leaders. As a mayor, Mr. Wilson witnessed the state of California’s attack on Mr. Armstrong and God’s Church and the Church’s miraculous victory by God through the Petris Bill and its signing into law by Gov. Jerry Brown.

His time as a senator saw the most explosive growth in God’s Work in terms of global impact and reach. This must have highly irritated then-Gov. George Deukmejian, who as State Attorney General previously led the charge to dismantle God’s Church and prevent Mr. Armstrong from completing his commission (Matthew 16:18).

Mr. Wilson succeeded Mr. Deukmejian as governor after the death of Mr. Armstrong and the subsequent rebellion of Joseph Tkatch and his supporters against what the Church founder had taught for over half a century (2 Thessalonians 2:5-10).

Additionally, during Mr. Wilson’s time as a senator, the Philadelphia Church of God began humbly in December 1989 under the leadership of Gerald Flurry, supported by his aide John Amos.

Six years after Mr. Wilson was elected as governor, the wcg sued God’s remnant Church through the California courts in another effort to destroy the Work of the living God. Habakkuk and Raising the Ruins provide the captivating detail of this epic struggle and victory.

Four years after Governor Wilson departed office, God delivered His people and rewarded them with Mr. Armstrong’s final work, Mystery of the Ages, along with 18 additional publications (Habakkuk 1:1-5).

Today, 12 years onward from that momentous event, those publications are free to any who desire the plain truth of God’s Word (Proverbs 23:23).

Mr. Wilson and all co-workers and members of the Philadelphia Church of God can remain faith-filled with the words written by Pastor General Gerald Flurry in the conclusion of Malachi’s Message:

“The Worldwide Church may have disfellowshiped Herbert Armstrong from their own church, postmortem, but they will never do away with his teachings. As this ongoing story unfolds and the Worldwide Church continues to self-destruct, be assured the work of Mr. Armstrong will never die. God’s end-time message from Malachi will go out. The Work will continue.”