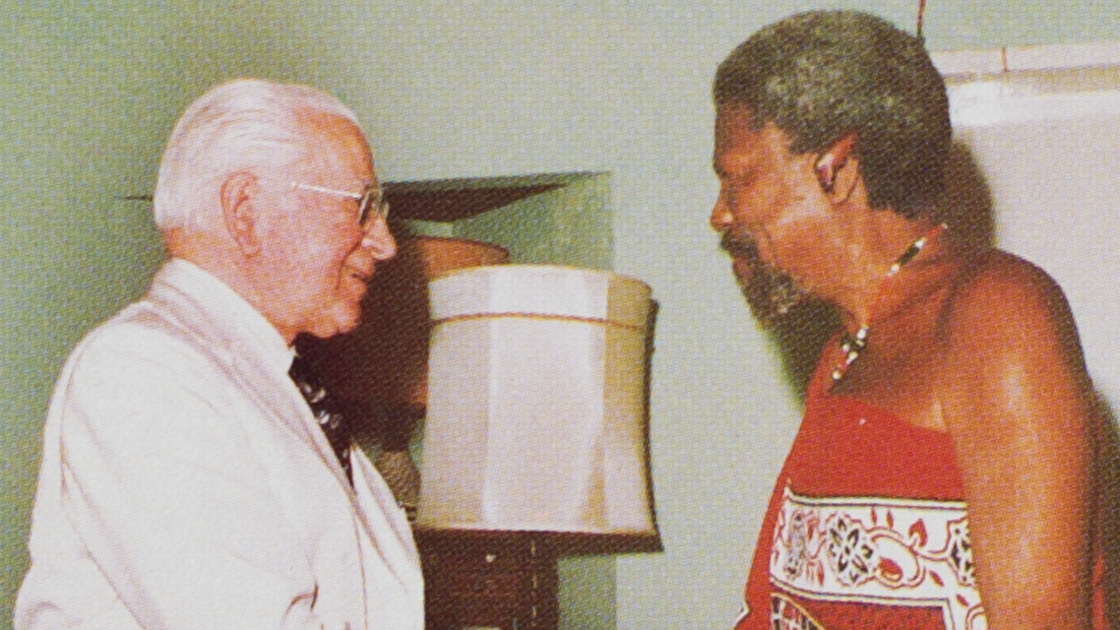 “November Triple-One Alpha Charlie cleared for takeoff” sounded from the cockpit of the Gulfstream II business jet in preparation for its 45-minute flight from Johannesburg to Swaziland. It was Tuesday, Nov. 9, 1976, and after taxi and takeoff, Herbert W. Armstrong’s anticipation of his historic first meeting with King Sobhuza surely occupied his mind.

The tiny nation of Swaziland is sandwiched between South Africa and the southern tail of Mozambique. Its storied history of nomadic people in search of a homeland is peppered with conflict and courage. Though the country gained its independence in 1881 after the death of its namesake Mswati II, it did not gain full autonomy from British imperial governance until 1921. From that time to the date of Mr. Armstrong’s visit, though the country had grown and developed, it still ranked among the poorest of nations, with a per capita income of as little as $280.

After landing and being greeted by a special entourage of officials, including the minister for state and foreign affairs and the assistant protocol officer, Herbert Armstrong, respected “ambassador for world peace without portfolio,” was driven to the Royal Swaziland Hotel and Spa. By 12:30 p.m. he was on his way to the palace. Writing to readers of the Worldwide News on November 22, he recalled, “We drove through two sets of armed gates manned by brightly uniformed guards which opened for us upon identification and drove along a beautiful, tree-lined private roadway to the palace.”

Arriving at the palace, which he described as a “simple frame building,” Mr. Armstrong was ushered into the royal throne room. The 76-year-old monarch, King Sobhuza, who had reigned 55 consecutive years, was resplendent in his tribal attire, consisting of a wraparound shawl, feathers in his hair and bare feet.

“After we sat down, the king began to explain that he had heard a great deal about Mr. Armstrong from his uncle”—who was actually a Church member and instrumental in organizing the historic meeting (Bob Fahey, ibid). During the 1½-hour meeting, “the king said that men often forget their origins and begin to kill their brothers; this should not be. He also said they forget the purpose of life and that, since Mr. Armstrong teaches what that purpose is, his contribution is invaluable.” To this Mr. Armstrong replied “that he has helped to bring various nations together, including Japan and Israel, and he feels he has even helped to lessen tension somewhat between the Israelis and Arabs” (ibid).

Discussion also included the prospective involvement of the Ambassador International Cultural Foundation in the production of a film about the country, planned as an enterprise to raise funds and awareness to aid the handicapped, along with assistance to a crippled children’s school.

Thereafter, discussion ranged from Mr. Armstrong’s friendship with Kenyan President Jomo Kenyatta and Ethiopian Emperor Haile Selassie, to his travels in Africa and the Church and the Ambassador International Cultural Foundation offices in the region. Before the meeting concluded, as was his habit with national leaders, Mr. Armstrong presented the king with a special gift of Steuben crystal. After examining the gift and expressing his appreciation, the king broke with precedent and asked for a group photograph, which apparently he’d never done before. The king told this patriarchal ambassador for world peace, “Please realize that you are at home, and you are welcome in Swaziland, and we are pleased to have you here.”

Later that evening, Mr. Armstrong hosted a dinner in the king’s honor at the Royal Swaziland Hotel. Both King Sobhuza and his wife attended, along with the deputy prime minister and entire government executive cabinet. Mr. Armstrong toasted the king, then Prime Minister Maphevu Dlamini, and made introductory remarks, which were followed by an explanation of the purpose and work of the foundation by its vice president of financial affairs.

“I spoke exactly 30 minutes,” the ambassador for peace recalled in that same Worldwide News edition. As with his visits to other countries, in Swaziland Mr. Armstrong aimed to fulfill his commission of preaching Jesus’s Matthew 24:14 gospel message of God’s coming Kingdom as a witness. An aide recalled him declaring to the country’s leaders “the purpose of life and how important the king considered this to be. He also explained that there would be a restoration by God on the Earth to bring world peace.”

The message was so well received that Mr. Armstrong noted, “It was taped and will be used as a Swaziland radio program. This was at the government’s request. We were asked by the prime minister to return as soon as possible on our next visit to Africa.”

The following day, Prince Masitela, the king’s son, along with half of the government cabinet, assembled at the prime minister’s office for further meetings with foundation officials, focusing on possible aid and prospective humanitarian projects sponsored by the foundation. This concluded a most successful and historic inaugural visit by the ambassador for world peace to the nation of Swaziland.

King Sobhua died in 1982 after reigning 82 years and 9 months. His was the longest reign of a monarch on record. He fathered 210 children and, at the time of his death, boasted 1,000 grandchildren! His encouragement to Herbert W. Armstrong of “his invaluable contribution” to mankind no doubt was remembered by him until his death in 1986.

This example of kingly friendship, mutual respect and collaborative efforts to ultimately aid not only the people of Swaziland but all races, on all continents and embracing all cultures, was not buried with Mr. Armstrong. Thankfully, his humanitarian legacy continues today. Through the Armstrong International Cultural Foundation, founded and chaired by Gerald Flurry, peoples of all continents are, once again—as was the case at Ambassador Auditorium in Pasadena under Herbert Armstrong—increasingly having their cultures showcased at Armstrong Auditorium in Edmond, Oklahoma.

Additionally, they are being encouraged to understand that the only way to lasting peace is through the creation of an ever expanding Family of God through which the Creator of humankind will soon establish that which Herbert Armstrong called the—now so imminent—”wonderful World Tomorrow”!

How can you help Armstrong International Cultural Foundation? Request our prospectus.