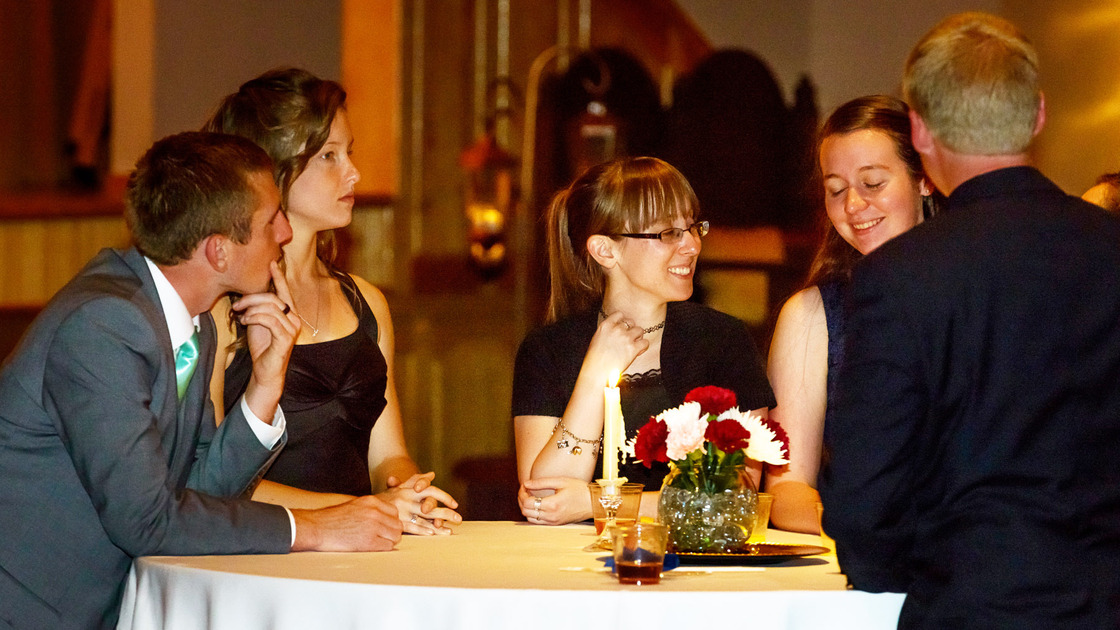 EDMOND—Graduating seniors and sophomores from Herbert W. Armstrong College were recognized at the first graduation ball at Edstone, England, on May 7 and the 15th graduation ball in Edmond, Oklahoma, on May 14.

In Edmond, the John Amos Field House gym was decorated with a “British Royalty” theme, including a double-throne as a photo booth. Faculty joined the juniors and freshmen and awaited the graduates’ grand entrance. Eighteen sophomores and 13 seniors with their dates were announced from the stage and walked down a flight of stairs on a red carpet. The group watched a slideshow of the two-year and four-year graduates. The group watched a video from Edstone, put together by senior Jessie Hester, which included a scene from Shakespeare’s King Lear from the sophomore Shakespeare class, lighter moments from the students and footage of the hall and grounds with a voiceover from dean of students Stephen Flurry. For the rest of the evening, students and faculty conversed, ate finger food, and danced under a hanging crown of twinkle lights.

Juniors Justin Goodearl and Lauren Eames organized the event, with the help of their class and the freshmen. Goodearl said he learned a lot from being “thrown in the deep end,” since he had no prior experience in organizing events. He added that he learned the value of communication.

Students studying and working at the Church’s regional office campus in Warwickshire, England, held the ball a week earlier, before the dean departed to Edmond for graduation. Students, faculty and local members dined in the Edstone Hall conservatory at the ball themed “Simply Royal.” The four sophomore graduates were introduced to the group in a grand entrance. After dinner, the group gave toasts, which included “to the Kingdom of God,” “to new beginnings,” “to open doors” and “to friendship like we’ve never had before.” The group then watched Hester’s video, followed by dancing in the living room and fireworks by the lake.

Sophomore Kaitlin Eames said this was one of the most inspiring events for her at Edstone.

“It was overwhelming, actually, sitting there together in the sun room with sunset rays streaming over us, hearing the buzz of family chatter and laughter,” she said, “and knowing that this is just a foretaste of something much more spectacular coming in the future.”

Hester organized the event, which he said took planning, resourcefulness and vision. Mr. Flurry told him afterward that it was exactly like headquarters.

“It goes to show that when you’re trained at HQ, you take it everywhere you go,” Hester said.

Ten of the graduates are now full-time staff members for the Philadelphia Church of God in Edmond.