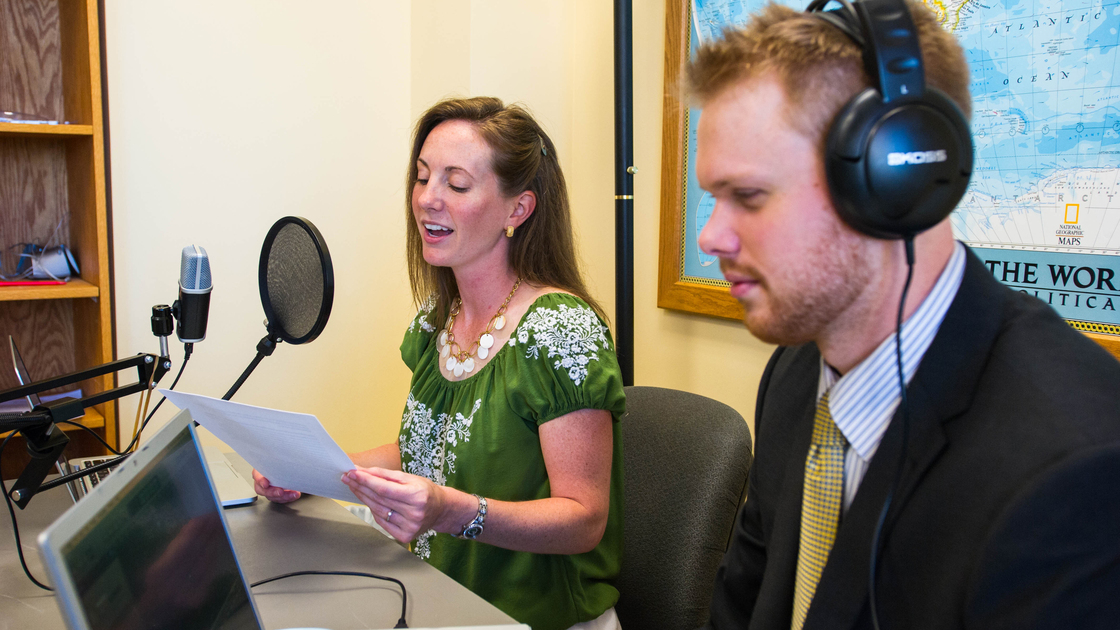 EDMOND—“Russian President Vladimir Putin met in Moscow today with the leader of Georgia’s breakaway region ….” “U.S.-led NATO drills in the Baltic states and Poland began today ….” “The United States Patriot Act expired today ….” Regular listeners to KPCG 101.3 FM in Edmond, Oklahoma, get this news and more at the top of the hour, on the hour. This entirely new project happens thanks to 22 Philadelphia Church of God staff members who record three 5-minute updates per day. How does it all come together? Here is a glimpse.

Each of the 12 writers, when his shift comes up on the rotating schedule, has to check the day’s news, sift out the most important prophetic events, draft the update, and edit it for the spoken word. Scriptwriters first find the most important stories through their favorite news sources as well as through Associated Press Television News, Drudge Report, Reddit News and Twitter.

These constantly updated sites lead to reputable sites, including the Associated Press, Reuters and the New York Times. The writer then decides which story to cover using four criteria: 1) Is it big breaking news? 2) Is it prophetically significant news? 3) Does it have available soundbites or natural sound? And 4) Is it timely?

Once the scriptwriter has decided which story or two to cover, he writes one or two 100-200 word segments and condenses, cuts and revises the previous script to make an up-to-date and coherent 700-word segment.

The writer must aim it at the individual listener, keep the topic narrow and put the most important information at the front. He must write sentences in subject-verb-object form, emphasizing one thought per sentence with clear and simple logic while including telling details. He must write the hook, show the conflict, and end the story with some sort of resolution.

“The writing style must be simplified as the audience only has one chance to get the message,” Editorial staff member Brent Nagtegaal said. “Sentences are generally shorter and punchier, and without redundancies.”

“Shorter sentences is one big difference,” he said. “Also the articles are shorter and simpler—just the facts and as quickly as possible.”

Trumpet writer Robert Morley said it’s important to let soundbites tell the story and to spell out numerics (twenty-fifteen) to assist the newsreaders.

The reader at Edstone records at a table in Palmer’s office while a more permanent recording studio is being constructed in the basement. Palmer, who is a reader as well as a scriptwriter, said that some early recordings included the sounds of builders’ tools or a piano playing in another room.
In Edmond, once the script is done, the reader as well as Television staff member Josh Sloan and station manager Dwight Falk have less than one hour and fifteen minutes to record the segment, edit it, format it, and play the file in time for the top of the hour.

The nine Edmond readers record at a studio on the second floor of the Hall of Administration, at Mr. Malone’s office in the Hall of Administration, or at his home office. The reader receives a final script 15 minutes before recording, which gives him a few minutes to figure out difficult pronunciations using websites such as Forvo. Herbert W. Armstrong College voice instructor Paula Malone is teaching readers the International Phonetic Alphabet to improve their pronunciation abilities. Newsreader Sarah Evans said she does vocal warmups before recording.

Newsreader Michael Cocomise said he wanted to speak on the radio while growing up.
“Now I have been given that opportunity,” he said, “It is an awesome experience and I am grateful for it.”

Evans said being able to record for radio is an “amazing opportunity.” “[The late Herbert W.] Armstrong started on the radio, and now we’ve come full circle,” she said.

A Day of kpcg News Segments

8:40 a.m. UK-Europe Regional Director Brad Macdonald discusses the order of the five or so stories and who will write what.

11:30 a.m. Livingston sends the recording to Falk in Edmond.

At the same time…

5:30 a.m. As the file comes through, Falk is arriving on campus to play Edstone’s news segment at 6 a.m. and to load it onto theTrumpet.com.

6:00 a.m. Edstone’s news update segment plays at the top of the hour.

8:30 a.m. The Edmond staff adds one or two extra stories. Fifteen minutes later, a newsreader records the script for the 10 a.m. update.

12:30 p.m. The Edmond staff adds one or two extra stories. Fifteen minutes later, a newsreader records the script for the 2 p.m. update.

4:30 p.m. The Edmond staff adds one or two extra stories. Fifteen minutes later, a newsreader records the script for the 6 p.m. update.