PCG members: In addition to PCG Signposts, sign-up for the members-only Friday Philadelphian weekly email newsletter! Click here or email news@pcog.org ✖
Miracles in Six Days
The story of the amazing, documented miracles that led the small nation of Israel to victory
By Christopher Eames • April 28, 2015 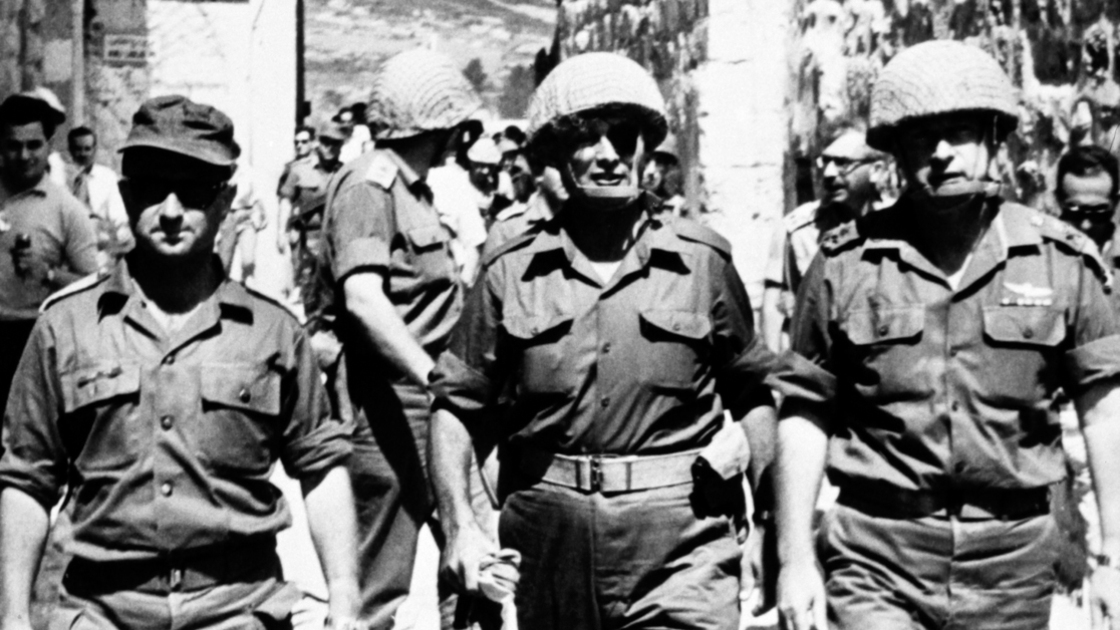 The little nation of Israel faced destruction. Its army of 275,000 soldiers was about to be set upon by the combined powers of four great kingdoms, 456,000 military men. Only a miracle from God could save the nation from sure destruction. And save it God did—by many miracles.

This could easily be mistaken for one of the great biblical battles Israel fought. The fact is, though, that this war remains in living memory. The little nation of Israel, having only been formally reestablished in its biblical homeland in 1948, was, by 1967, facing destruction by four major Arab nations and many other supporting belligerents. The combined might of Egypt, Syria, Iraq and Jordan was about to bear down on the little nation of less than 2.5 million Jews. Israel had half as many soldiers, less than half the tanks, and only a quarter of the aircraft. Yet against the greatest of odds, God delivered a truly miraculous victory to Israel in what is today known as the Six-Day War.

The Arab nations surrounding Israel had never accepted the official 1948 international reinstatement of the land as a Jewish state. They fought bitterly in the 1948 Arab War to try to destroy the fledgling Jewish nation but were defeated. In 1967, they planned to try again, combining forces once more to defeat Israel in what should have been a quick and decisive victory. Yet within six days, Israel had defeated the Arab armies, tripled the area of land under Israeli control, and fully reclaimed Jerusalem as the capital city of Israel.

Many dismiss God and His miracles of the Bible as having never happened. Still others will accept the proven biblical record but believe that the day of miracles is now gone—that God does not intervene in world affairs like He once did. Is this really true? Have we seen the last of the great biblical miracles?

The answer is a definite no. Just as ancient archaeological history can help prove the biblical record, recent secular history shows that great miracles have happened when a nation looks to God during times of crises and when God has a definite purpose being worked out. This article will not look into a detailed play-by-play account of the Six-Day War, but it will show the amazing documented miracles that enabled an Israeli victory, miracles that show God’s hand still working in the affairs of men.

Israel was aware of the plans the Arab alliance had been making for war. The mass movements of heavy Arab artillery, a blocking of a major sea lane to Israel, and a truce between a number of Arab nations all made the impending war obvious. Israel had a choice: wait to be attacked, or strike the first blow.

Early in the morning on June 5, 1967, nearly 200 Israeli airplanes took to the sky, making their way toward Egypt. Jordan, picking up the Israeli air force movements by radar, forwarded a coded warning to Egypt. In a miraculous stroke, however, the Egyptians had changed their message-coding equipment without notifying the Jordanians. As such, the Israeli planes were able to knock out more than 300 Egyptian planes—more than half the Egyptian air force—in only three hours! For some reason, no order was given for the Egyptian antiaircraft missile batteries to retaliate. By the end of that initial day, two-thirds of the Syrian Air Force had also been destroyed, along with most of the Royal Jordanian Air Force.

For the Arab alliance, things got worse. Rank ineptitude and disorder reigned. Israeli desert troops made their way into the Sinai Peninsula, readying an attack on the well-armed Kusseima military outpost. Massive explosions were heard within the base, and by the time the Israelis arrived, they found the Egyptians had already destroyed their own equipment and fled. Egypt had abandoned other military bases as well.

Surely such military successes were too much for just the little nation of Israel to accomplish. The belligerent Arab nations hoped to deceive their people by propaganda that Israel was being supported by the U.S. and Britain. This was completely false—even a war-weary King Hussein of Jordan finally requested military help from the British he had so readily accused!

The Golan Heights was a well-fortified Syrian front in the Six-Day War. Israeli commander Musa Klein, stationed in the Heights, had only 25 men left in his platoon after fierce fighting. Approaching a Syrian position, he ordered it to be charged upon by his few men, unaware that it was one of the strongest Syrian positions in the Heights, rigged with an impressive array of machine guns, mortars and bunkers. The Syrians were ordered not to fire until the Israelis were at point-blank range, just in front of the doubled row of trench wire—but they waited too long. All of a sudden, a cry of Arabic rang out: The Jews are already inside, and we’ve taken heavy casualties! The commander’s attack had been an outstanding success.

The Israelis had been expecting a fierce and bloody land battle on the well-fortified Golan Heights, the Arab bunkers impervious to conventional airstrikes. However, by June 10, before many of the enemy positions were even set upon by the Israelis, the Syrians had left their weapons and fled their positions in a state of panic!

The miracles just kept happening. There is the story of an Israel Defense Forces’ vehicle, heavily laden with highly explosive equipment, which had been parked in Jerusalem on a delivery to resupply ammunition to the Israeli soldiers. If the vehicle had been hit by the Arab’s shelling, the ensuing explosion would have destroyed several nearby buildings and potentially ended numerous lives. In fact, the vehicle was directly hit by an Arab shell. But the shell did not explode—it merely landed harmlessly atop the Israeli shells stacked inside the vehicle!

A reservist Israeli cab driver tells his story of the conflict. He and another Israeli reservist were on patrol near the Tiran Straits. All of a sudden the two men, armed with light weapons, met with an Egyptian half-track, filled with Egyptian soldiers and mounted with machine guns. Death seemed imminent. The Israeli men pointed their inferior weapons at the enemy and waited to be mowed down. The cab driver described (via Arutz Sheva):

The half-track came to a halt, and we decided to cautiously approach it. We found 18 armed soldiers inside sitting with guns in hand, with a petrified look on their faces. They looked at us with great fear as though begging for mercy. I shouted “Hands up!” As we were marching them and I had returned to a state of calm, I asked the Egyptian sergeant next to me, “Tell me, why didn’t you shoot at us?” He answered, “I don’t know. My arms froze—they became paralyzed. My whole body was paralyzed, and I don’t know why.”

The statistics from the war are amazing. For every Israeli who died in the conflict, 25 of the enemy died. For every Israeli prisoner of war, there were over 394 Arab pows. For every Israeli plane that was downed, more than 11 Arab planes were lost. The Arabs called the conflict an-Naksah, or “The Setback.” That is some setback! The Israelis called it the “Six-Day War”—not only to identify the miraculously short length of the war, but also to evoke the six days of creation.

There are many more miracles that happened during the Six-Day War that you can read about. They are a testament to the power and intervention of the great God. Israel had indeed won a miraculous war—the sort you read about in the Bible. Prayers had incessantly been offered up by Jews in Israel and around the world for deliverance from the might of the Arab invaders. After the war, on Pentecost, hundreds of thousands of Jews arrived in the recently recaptured city of Jerusalem, offering up prayers of thanks to God for His miraculous delivery from the jaws of the Arab armies.

God certainly does deliver His people when they cry out to Him. Leviticus 26 says: “If ye walk in my statutes, and keep my commandments, and do them … ye shall chase your enemies, and they shall fall before you by the sword. And five of you shall chase an hundred, and an hundred of you shall put ten thousand to flight … ” (verses 3, 7-8). These verses certainly ring true with the stories from the Six-Day War. That is not to say the Jews were completely righteous in their observance of God’s commands. If Israel completely relied on God, as the nation should have from the moment it left the slavery of Egypt, it would not have had to fight a single battle (Exodus 14:13-14; 23:27-28). But God still hears the prayers of those who cry out to Him for deliverance.

And so we see that the day of miracles is not past. No army is too much for our Creator to handle. As Isaiah 40 says: “Behold, the nations are as a drop of a bucket, and are counted as the small dust of the balance …. All nations before him are as nothing; and they are counted to him less than nothing …. He giveth power to the faint; and to them that have no might he increaseth strength.”