The Best, Most Effective and Powerful Work of Your Life
God’s Work needs you to develop this extraordinary godly quality!
By Andrew Locher • March 2012 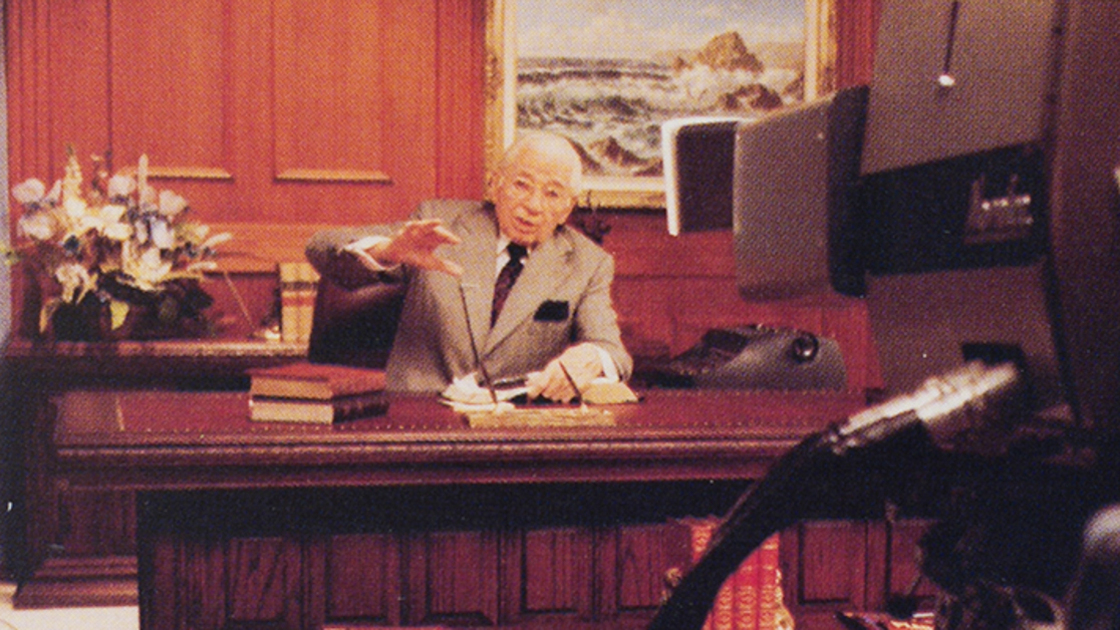 “We are off to a running start in the new year, 1981. Never before has God given us such a leap forward at the very beginning of a new year!”

This is how Herbert W. Armstrong started a member and co-worker letter he wrote Feb. 8, 1981. It was toward the beginning of the most remarkable period of growth in the Worldwide Church of God’s history: the final years of Mr. Armstrong’s life. During that time, God blessed the Church with an explosion of growth: greater reach, amplified power, more members and co-workers, larger income. It was easily the most dynamic, world-encompassing period in the entire history of God’s true Church.

What is particularly extraordinary is that God sparked it all through an aged man in his upper 80s and early 90s.

Think on Mr. Armstrong’s words from this letter. “In this time of world turmoil, Jesus Christ is starting off His Work for 1981 with a dynamic start! He is inspiring me as never before. I am doing the best, most effective and powerful work of my life. I feel the surge of God’s Spirit and inspiration and power as He uses me more effectively than ever!” (emphasis added throughout).

Mr. Armstrong then detailed his most recent activities: He had just returned from a trip to Japan and the Philippines, where he had spoken before several large audiences; he had visited several dignitaries and attended and spoke at special luncheons and dinners in his honor; he spent time and spoke at a conference of the Filipino ministry, as well as Sabbath services with the brethren; he was even recording numerous World Tomorrow television programs. This was all when he was 88 years old!

“What I am doing now, as televised, is, I feel, vastly improved and more effective than I was doing a year ago,” he wrote. “I may be a year older, but I appear younger, smooth-speaking, more vigorous and effective. God is invigorating and inspiring me.”

Mr. Armstrong was working harder than ever, and he gave all the credit to God. “God is helping me now to do the best work of my almost 89 years of life!” he continued. “I am working harder, more energetically than ever before. I now need you to work harder, more energetically and at greater sacrifice in prayers and extra financial offerings than ever before!” He concluded by detailing several more projects he was undertaking—including maintaining a schedule of flying out to visit field congregations every two weeks. “I am pushing myself forward as never before. Back me up!” he pleaded.

What an incredible example of how God’s Work is accomplished not by physical might or power, but by God’s Holy Spirit (Zechariah 4:6). God was able to powerfully use the deteriorating body of an old man to achieve wondrous things.

How much is God able to achieve through you and me? How much more could we be doing to help God’s Work?

Mr. Armstrong gained strength as he aged, even toward the end of his long life! Clearly his strength came from God—and yet he had to actively, vigorously draw on that spiritual source of power!

How easy would it have been for Mr. Armstrong, as he reached his twilight years, to take his foot off the accelerator? Our natural human tendency is always to concoct excuses to do just that.

Satan the devil is relentlessly working to dull our minds, to smother our spiritual passion, to squash the enthusiasm we should have for our calling. For this reason, we all face a serious daily battle against that inclination to let down.

Why, after all, should prayer be so hard, when it is such an honor? Why, when we are putting in our daily study of God’s magnificent Word, do we sometimes find ourselves “studying the clock” instead?

As fallible human beings, we are naturally inconsistent. We tend to follow our bursts of energy with lapses into complacency. We rise and fall, we surge and retreat, we falter, we relax. Even Mr. Armstrong admitted to having these proclivities as a younger man; he had to work very hard to overcome them.

In the parable of the sower, Jesus Christ spoke of how easy it is for a Christian to be like a plant that grows up among thorns and brambles, and thus, “the cares of this world, and the deceitfulness of riches, and the lusts of other things entering in, choke the word, and it becomes unfruitful” (Mark 4:19).

God wants us to grow and to keep growing—to become spiritually more productive, more robust—to bring forth fruit 30-fold, 60-fold, 100-fold! (verse 20). He wants us to be a picture of steady, consistent spiritual growth day by day, week by week, year by year. He wants to help us, even if physically frail, to do “the best work of our lives” right now!

Toward the end of 2011, our pastor general, Gerald Flurry, announced that the Philadelphia Church of God was experiencing a decline in membership and income. He encouraged us to examine ourselves and to remove any spiritual rottenness, anything that was hindering God from blessing us.

It quickly became clear that the Church responded earnestly to this correction. There was a real surge in spiritual fervor among the members and co-workers, and that brought unmistakable blessings and open doors for God’s Work! God reversed the decline and began blessing the income immediately.

God’s Church has experienced a very real, even measurable renewal and supercharging of spiritual power. The question now is, can we sustain it?

When God corrects us, He loves to see us respond quickly and enthusiastically. But we must do more than simply have a short-lived boost. That correction needs to permanently change us!

If you study the history of God’s people, there has been an embarrassingly repetitive tendency in such circumstances to relapse into spiritual lethargy. The classic example can be found in the book of Judges: After entering the Promised Land, the Israelites allowed themselves to fall into a terrible cycle, time and again, of self-satisfaction, sin, sore punishment, and repentance.

Our human nature is the same as theirs. It pushes us to extremes and letdowns. We must become like Mr. Armstrong and draw on God’s power, disciplining ourselves to avoid that deadly trap.

Thankfully, God is perfectly reliable and utterly stable. He does not have slides or slumps. In Him is “no variableness, neither shadow of turning” (James 1:17). Jesus Christ, even while in the flesh, was perfect for every second of His life! And He is “the same yesterday, and to day, and for ever” (Hebrews 13:8).

This is the nature of the God Family! Where human beings are erratic and fickle, God is steady and unchanging. We drive ourselves hard for a spurt and then stall—but God wants us to keep pressing forward, progressing from strength to strength! He expects us to grow in His very character, to become as stable and consistent as He is!

After all, He is preparing us to enter His very Family forever! God needs reliable God beings. And He and His Work need each of us to develop and manifest those godly qualities today!

Assess yourself. Be honest. How steady is your spiritual growth? Are you doing the best, most effective and powerful work of your life? Do you feel the surge of God’s Spirit and inspiration and power as He uses you more effectively than ever? Are you working harder, more energetically? Are you pushing yourself forward as never before?

If not, what is hindering your growth? Are you allowing the thorns of worldliness to prevent you from blossoming and bearing fruit? God wants you to cut that out and train your focus solely on Him! Jesus said in Matthew 6:22-24, “The light of the body is the eye: if therefore thine eye be single, thy whole body shall be full of light. … No man can serve two masters: for either he will hate the one, and love the other; or else he will hold to the one, and despise the other. Ye cannot serve God and mammon.”

We can all do more to hone our focus—to make it more singularly fixed. Imagine if God informed you directly that Jesus Christ would return in one month. How would you live for that month? How much would you shut out the distractions of Satan’s world? How focused would your prayer and study be? What would you cut out in order to put your energies toward the things that truly matter?

Character development doesn’t happen by accident. Our spiritual state doesn’t naturally improve. What, then, is your plan for eliminating your flaws, for overcoming your sins, for achieving perfection?

Consider keeping a journal or a log each day of the time you spend in prayer, study and meditation—as well as what you are studying and praying about. Record how you spend your work hours, and how much time you devote to your family. Keep track of how often you fast, and how effective those fasts are. At the same time, also catalog what time you commit to entertainment, to selfish or time-wasting pursuits. This won’t be an easy exercise to undertake, but you may find it an invaluable tool in learning how to better budget the minutes and hours of precious life that God has given you to use for His purposes.

Give serious thought to what more you can do to come out of this world, to simplify your life, and to give God all your focus. As you follow through on that, God will be able to supply you, day by day, with a continually increasing flow of spiritual power!

Use that power to become—like God—more stable and consistent. Each day, push yourself forward as never before. Every day, work harder, more energetically than ever. You too can feel the surge of God’s Spirit and inspiration and power as He uses you more effectively than ever! In the time ahead, you can help God’s Work—and even hasten Christ’s return—by doing the best, most effective and powerful work of your life!