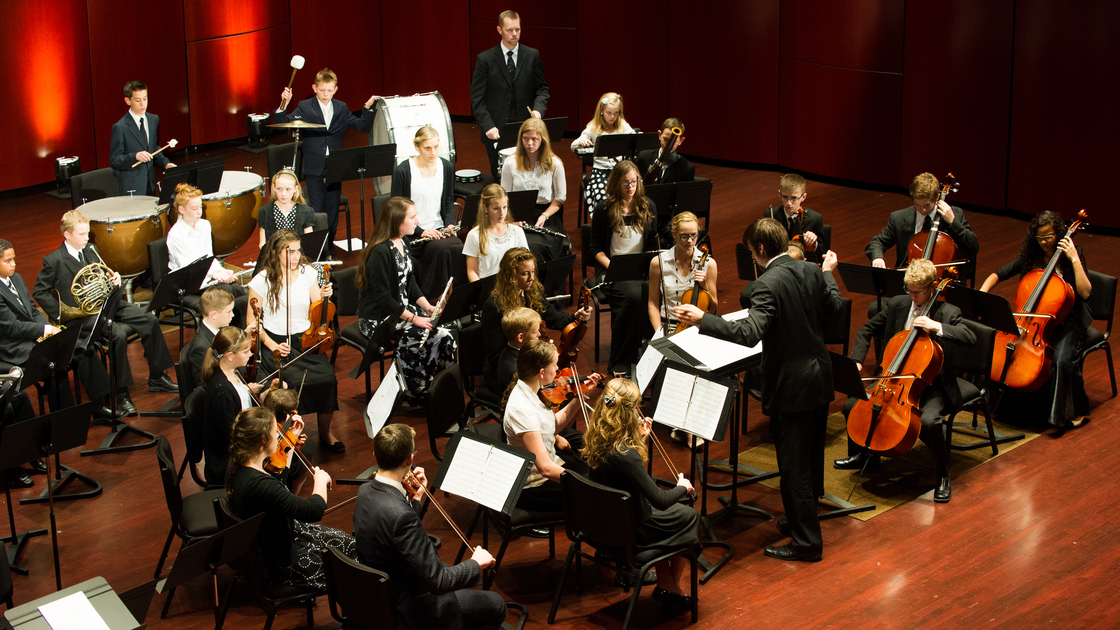 EDMOND—Imperial Academy students delivered 39 performances during their 2014 fall recital on December 11 at Armstrong Auditorium. The concert featured a total of 50 students from the Philadelphia Church of God’s elementary and secondary school, joined by three students from Herbert W. Armstrong College.

The recital included music from the Armstrong Youth Orchestra, the Junior Ambassadors and dozens of private vocal and instrumental students playing guitar, flute, violin, cello and oboe. Audience members viewed the recital live at the auditorium, while an additional 189 viewers streamed the performance live online around the world.

The night opened with the first performance of the Armstrong Youth Orchestra led by guest conductor and beginning winds instructor Christopher Eames.

“The orchestra keeps getting better and better,” AC sophomore Albert Clarke said. “The first recital I was here [winter 2013], it was good—now it’s breathtaking,” he said. Noting the expansion of the orchestra, Clarke said, “When we saw them walk out from backstage, it was a flood of people.”

The Junior Ambassadors displayed their vocal talents with Thomas Moore’s “The Harp That Once Through Tara’s Halls” and a crowd-favorite, “Man in the Mirror.”

AC junior Samuel Livingston, who served as a stagehand, said that as the children waited backstage for their turn to perform, “surprisingly, they are all very calm. They know what they are doing.”

“In one night, all their practice really showed in a brilliant performance,” AC freshman Kieren Underwood said. Underwood, a guitarist, has participated in the first semester of the two schools’ weekly combined performance class. “It was nice to see the little kids get up there who aren’t playing anything profound, but they are gaining performance experience to be great entertainers in the future,” he said.

One 7 year-old said her favorite part about her piano piece, “Whoop-de-do!” was “trying to figure out the notes.” “I like finding the notes on the staff,” she said. When asked what her favorite part of performing is, she said, “Walking on stage and smiling.”

You can watch a recap of the performances here.