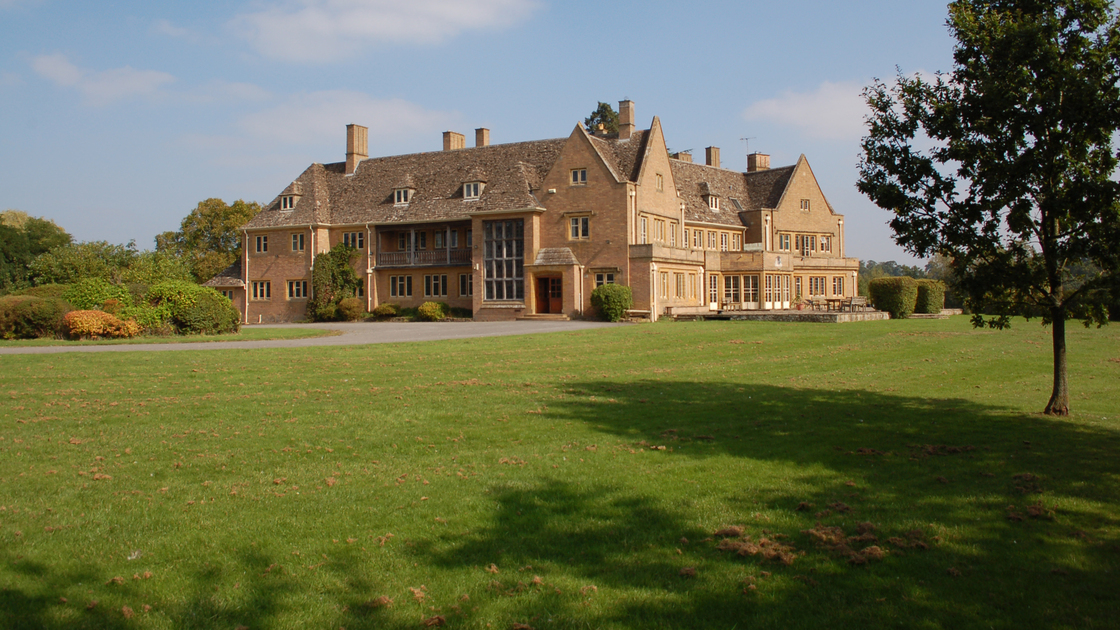 EDMOND—The Philadelphia Church of God officially purchased a new campus in England on November 12. United Kingdom/Europe Regional Director Brad Macdonald received the keys today from a Sotheby’s real estate agent, marking the official closing of the deal and opening of a new chapter for the Church’s work in Britain and Europe.

The estate will serve as a new location for the Church’s regional office in England. A handful of students from Herbert W. Armstrong College will also travel to England to support the Church’s work in the region.

Edstone Hall, a 24,000-square-foot mansion in the Warwickshire countryside, contains more than 30 rooms. Built in 1939 in the art deco style, the building has an oak double-door entrance into a stained glass vestibule, stone mullion windows, stone fireplaces, balconies, a 5,500-square-foot Georgian cellar, a Cotswold stone roof and a detached garage. The 22-acre campus sits among the meadows about 4 miles north of Stratford-upon-Avon.

The parkland surrounding the hall includes meadows, pastures and woodland including mature oak and beech trees, as well as walking paths, gardens and a cedar of Lebanon; it also overlooks a large pond. The property also includes planning permissions for a 10,000-square-foot additional building, and an indoor swimming pool and a leisure complex.

“I believe God has long been preparing Edstone for His Church,” Mr. Macdonald said. “Edstone is ideal for the pcg—a perfect combination of majesty and functionality. It’s dignified and impressive, yet practical and sensible.”

Receiving the key to Edstone Hall capped off a two-year quest for a new campus in England. In December 2012, pcg Pastor General Gerald Flurry asked Mr. Macdonald to search the London area for estates that could fulfill the needs of an expanded work in Britain and Europe. Mr. Macdonald soon discovered that the former Ambassador College campus in Bricket Wood was for sale. The college there closed 40 years ago, in 1974.

In March 2013, the Church placed an offer on a portion of the Bricket Wood estate, including its mansion, Hanstead House, and a cottage where Ambassador College founder Herbert W. Armstrong stayed during his visits to the campus. Mr. Flurry announced the offer in July during a sermon at Philadelphia Youth Camp in Edmond. But over the next nine months, the sale decelerated. The owner of the Bricket Wood estate, a London real estate development company, was denied planning permission for its residential neighborhood by the St. Albans Council. This prevented an expedient sale to the pcg.

This April, Evangelist Stephen Flurry and his family flew to Britain, and he and Mr. Macdonald spent several days attempting to reconcile with the developer and the town council. On the final evening of their time together in Britain, the Flurry and Macdonald families gathered to discuss the happenings of the trip. During the course of the evening, Mr. Macdonald searched online to see what the £4.5 million the Church had offered could buy elsewhere, and found several estates of similar grandeur and a lower asking price.

“There was a kind of epiphany,” Mr. Macdonald said. “Why not look elsewhere? we thought. We did a quick Internet search, and within minutes we were oohing and aaahing over at least a dozen other magnificent homes, all of which were less expensive and came with greater acreage and more features.”

Later that week, Mr. Gerald Flurry determined that the door to Bricket Wood was closed and directed Mr. Macdonald to search for other estates. Along with regional office manager David Howard and editorial department writer Richard Palmer, Mr. Macdonald spent two weeks parsing dozens of possibilities and visiting more than 20, the last of which was Edstone on May 5. On May 8, Mr. Flurry and his son flew to England and viewed six estates over the next two days. On May 14, the pcg submitted an offer on the estate in Warwickshire, which was quickly accepted and became official in early June.

Mr. Gerald Flurry announced the offer during a Bible study in Edmond on May 16 at the beginning of the AC graduation weekend. After nearly five months of routine inspections, legal paperwork and negotiations, contracts were exchanged and the sale was formalized on September 24. At the Feast of Tabernacles on October 8, pcg members at 16 sites around the globe learned the location, name and details of the estate in a taped opening night presentation by Mr. Stephen Flurry.

Meanwhile, the Church’s regional office operations will move from a 900-square-foot facility in the Northampton town center to approximately 5,000 square feet in Edstone Hall devoted to office space.

(For more on the dramatic growth of the UK regional office over the past seven years, watch for the next edition of the Philadelphian on December 4.)

“With the greatly expanded office space now available to us, we anticipate expanded regional operations to immediately get underway from Edstone,” Mr. Locher said. “I was excited to see the fine quality of construction that is move-in ready. Of course we will add our personal touch to the property, but for the most part, we can move in and expand our operations from day one. There is much work to do with the details, but with our experienced staff having already developed a campus, we are ready for the challenges and hope previous experience will move the process along rapidly.”

“There is much work to be done between now and mid-January, when 15 students and HQ employees will be moving to Edstone,” Mr. Stephen Flurry said. “With Mr. Macdonald and his family now living at Edstone, renovations can begin right away.”

The renovations and additional room will allow the office to expand its operations, which currently include literature request fulfillment, business, member services and convention planning. Mr. Macdonald says he hopes to move the office into Edstone the last week of December. The first semester of Herbert W. Armstrong College–England commences January 12.