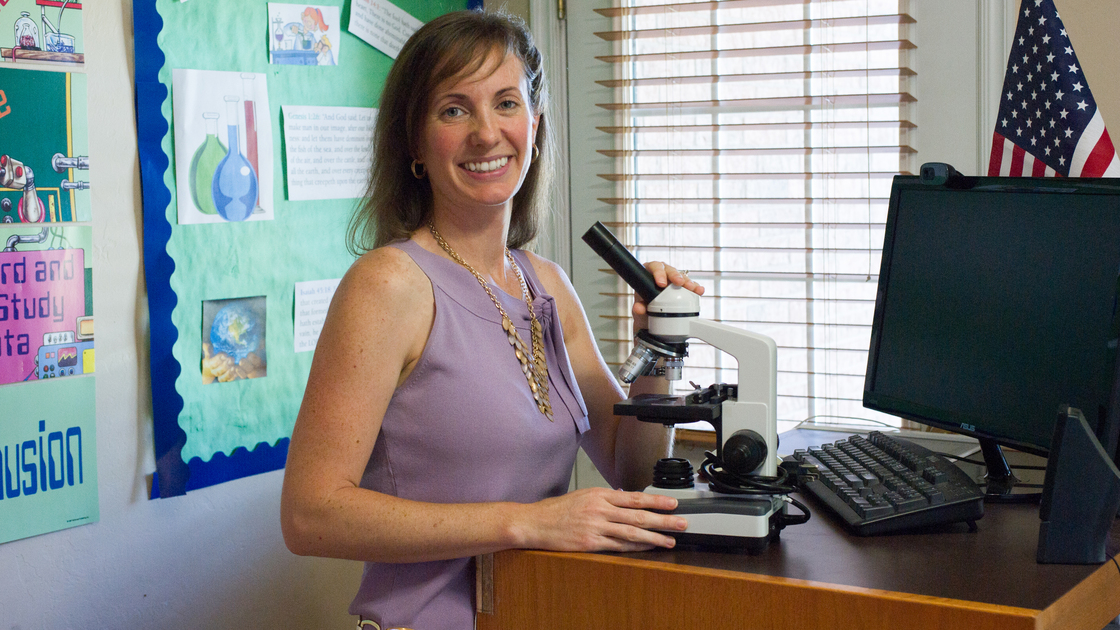 EDMOND—Life happens fast. New eighth to tenth-grade Earth Science teacher Sarah Evans can tell you how true that is. The Alabama member was hired by Imperial Academy the night before the 2014-2015 academic year began on August 12, and started teaching in Edmond less than three weeks later.

After a whirlwind August filled with tiling, grouting and selling her house; finding new homes for her pets; and moving from Alabama to Edmond, Evans started her new job on September 2.

Evans’s class had already started the school year with temporary teacher Daniel Arnfield, studying earthquakes and volcanoes. When Evans arrived, she met her eight local and 13 online students and picked up the curriculum with rocks and minerals. Evans says the course will cover “weather, astronomy, geology, rocks and minerals, the water cycle, soils, and the environment.”

Evans is teaching the Earth Science curriculum developed by former Imperial science instructor David Weeks before he was ordained a local elder and sent to the Canadian regional office in August.

The new science teacher is also using creativity to make the subject more interesting for her students. In one of her first days of class, she took the Edmond and online students on a field trip to Armstrong Auditorium so her pupils could examine specimens of granite, marble and other elements in the building.

Evans spices up her chapter reviews with Pictionary on the marker board. She also plans to invite headquarters staff members who work with the fountains, ponds, irrigation and wells on campus to give guest lectures on hydrology, as well as staff members who have studied meteorology.

To Evans, teaching Earth Science is more than showing teenagers the difference between metamorphic and igneous rocks. “My goal is to make this a comprehensive course where they can present and write essays and dig into special topics of personal interest,” she said. “We need to get beyond vocabulary words and showcase their well-rounded education. In my classroom, we educate the whole person, not just the scientific aspect.”

For her astronomy unit, Evans said she wants to tie the physical knowledge in to the Our Awesome Universe Potential booklet. “That’s the foundation, the premise,” she said. “[By] tying it to Herbert W. Armstrong’s restoration of those truths, even in Earth Science, we can bring it back to the Bible and Mr. Armstrong’s legacy.”

Evans was hired on August 11, completely to her surprise. “I got a phone call from [Regional Director Alex] Harrison,” she said, telling her that Pastor General Gerald Flurry thought she should move to headquarters. She sent in her resume, and a week later, chief financial officer Andrew Locher called with the Imperial job offer. “He knew I wouldn’t be able to get here right away,” Evans said, “but God opened it up for me quickly.”

Evans said her realtor told her it would take six to eight months to sell her Alabama home. “[I]t’s a slow season,” she said. “School has started, and families don’t want to move.” Despite these potential problems, she received a full-price offer within a week.

Evans attended Baypath College, a private women’s institution in Massachusetts, where she obtained her degree with a minor in science and a heavy background in biological science. Evans married her late husband, Jeffrey, and lived in Arkansas, where she worked as a pediatric therapist. The couple moved to Huntsville, where Jeffrey worked as a University of Alabama professor and Sarah remodeled their 1920s farmhouse. Her life changed dramatically once again with that August phone call.