The Prophetic Beast: Who or What Is It?
Have you heard of the prophetic “beast”? Do you know what it is and if it is real?
By Gerald Flurry • April 2012 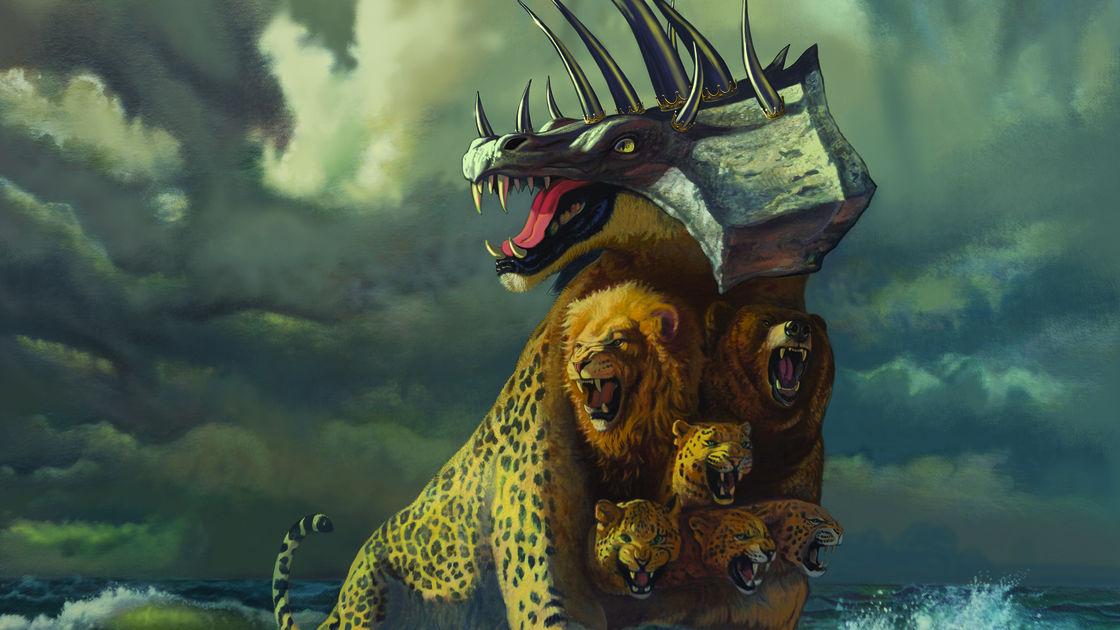 Have you heard of the prophetic “beast”? Do you know what it is and if it is real?

The Bible describes this beast in detail, but most Christian evangelists ignore this subject altogether—or admit that they just don’t understand it. Yet the prophetic beast is all about prophecies that are focused on the end time—right now!

In the Bible, there are four beasts. They are recorded in Daniel 2 and 7 and Revelation 13 and 17. Daniel saw them in a vision: the first like a lion, the second like a bear and the third like a leopard.

But the fourth was different.

This fourth beast is described in Revelation 13:1-2: “And I stood upon the sand of the sea, and saw a beast rise up out of the sea, having seven heads and ten horns, and upon his horns ten crowns, and upon his heads the name of blasphemy. And the beast which I saw was like unto a leopard, and his feet were as the feet of a bear, and his mouth as the mouth of a lion: and the dragon gave him his power, and his seat, and great authority.”

Related video: Who or What Is the Prophetic Beast?

This beast embodies the strength of the first three beasts—and it is so dreadful and destructive that you can’t compare it to any other beast on Earth!

This fourth beast is rising right now! It is going to take power and radically change our lives for the worse!

This prophecy comes right from your own Bible! Why don’t we hear more about it?

The Bible also talks about the “mark of the beast.” Those who do not accept this mark are going to be oppressed and killed by this fearsome power. Yet Jesus Christ says that He will inflict His worst wrath on those who receive this mark! It is crucial that we understand what all this means!

Who or what are these beasts?

“These great beasts, which are four, are four kings, which shall arise out of the earth” (Daniel 7:17).

God says these beasts symbolize four Gentile kings, or kingdoms. These beasts are not four churches, as some believe, but four world-ruling empires!

Daniel lived in the time of the first of these empires. He said Nebuchadnezzar was the first of these beasts, the great king of the Chaldean Empire. Then came the Medo-Persian Empire, then the Greco-Macedonian Empire. That’s all well documented in history books, and exactly what Daniel prophesied, right down to the last, most fearsome beast.

The Bible really draws our attention most of all to this fourth beast. What world-ruling empire was more fearsome and powerful than any of those others? Of course, it is the Roman Empire!

With all this dramatic emphasis on this end-time beast, why don’t our religious leaders discuss this more? God commissions us to warn about this rising beast, and that is what we must do!

This is not just ancient history. Daniel tells us that his book was sealed, not to be understood until “the time of the end.” I tell you, God promised He would reveal every one of these prophecies to us and fulfill all of these promises—and He has done that throughout history without fail!

Today, He has revealed who this fourth beast is.

Identity of the Fourth Beast

“And the fourth kingdom, which, developing from Rome, spread out and gradually absorbed one after another of these four divisions—‘dreadful and terrible, and strong exceedingly,’ was the Roman Empire (31 B.C. to A.D. 476).”

That statement comes from Whoor What Is the Prophetic Beast? by Herbert W. Armstrong. You need this powerful booklet, and I encourage you to order it; we will send you a copy completely free.

Mr. Armstrong continued: “It had absorbed all the others, occupied all their territory, was greater and stronger than all. It included all the royal splendor of ancient Babylon, thus having the head—the strongest part—of the lion. It had all the massiveness and numerically powerful army of the Persian Empire—symbolized by the legs, the most powerful part of the bear. It was the greatest war-making machine the world had ever seen, and it also possessed the swiftness, the cunning, the cruelty of Alexander’s army, symbolized by the leopard.

“And thus, this fourth beast was unlike any wild beast of the Earth. It was stronger, greater, more terrible, than any.”

Yet in Revelation 13, the Bible says this fourth beast was “wounded to death.”

That fourth empire was incomparable to any other. How can you even describe the Roman Empire? It was a super-powerful fighting force with mighty political power stretching over most of the known world. The world had never seen anything like it!

But there is something else you need to understand about this beast: It is still alive!

Revelation 13 reveals that after this fourth beast was wounded unto death, out of that wound came 10 horns. These horns symbolize 10 resurrections of that same Roman system that would rule this territory. These kingdoms exist between A.D. 476 and Jesus Christ’s Second Coming. Isn’t that incredible? The Bible prophesied about these successive governments centuries in advance, and that is exactly what came to pass!

This is incredible biblical prophecy, but no one proclaims it! God is using the strongest possible symbolism here, and even our religious leaders completely ignore it!

We must listen to this incredible message—and the warning—and believe what God says. He prophesied that these empires would all come to pass, and they all have. The Bible gets into even more detail about these 10 resurrections of the Roman Empire. And you can check the history books to see that all of these details happened just as God said they would. Just as the next world-ruling empire will.

The first three resurrections that ruled the ancient Roman territory were barbaric tribes. Then something momentous happened. A “little horn” plucked up these first three and established its own rule, characterized by a “mouth speaking great things” (Daniel 7:8).

After that point, there is something different—something subtler and even more powerful—about the last seven resurrections of the Roman Empire.

In A.D. 554, Justinian restored the Roman Empire, effectively healingthe deadly wound, and turning the page on the rule of the three barbaric tribes. Justinian also did something else: He recognized the supremacy of the pope. Because the empire was now tied closely to this great church, it became known as the Holy Roman Empire.

Counting Justinian’s empire, there have beensix major, historically documented resurrections of the so-called Holy Roman Empire—all of which have been heavily influenced, and in some cases dominated, by the Vatican.

Do you think the Bible has anything to say about these powerful empires? It does!

People worshiped this beast! This political organization is tied to a religious organization, and this combination of church and state worship “the dragon”—which is Satan the devil!

You can see why this beast is so ferocious and fierce, like no other animal on Earth. You can see why it is going to make WAR—and how this monstrous machine is so powerful that when people see it, they will think that no nation or even alliance of nations could dare make war with this beast power.

Notice what happens further on in this prophecy: “And I beheld another beast coming up out of the earth; and he had two horns like a lamb, and he spake as a dragon” (verse 11).

This is speaking of another beast, another organization. On the surface, this organization looks like it is innocent, even righteous—following Christ. It looks like a lamb. But when you listen closely to what it says, you find that it speaks like a dragon. It actually proclaims the subtle message of the dragon—because it worships the dragon!

This means the world is monstrously deceived about this beast that looks like a lamb! People who are actually following the devil sincerely believe they are worshiping Christ!

Verses 13 and 14 show just how powerful this false church is: It will perform all kinds of miracles. Its religious leader will perform great wonders, and people all over the world will believe that this church is from God.

Will you be able to recognize this counterfeit? It looks righteous—but in truth it is following the devil—and deceiving huge numbers of people! That is quite a compelling counterfeit!

The Mark of the Beast

This church guides that fourth beast. In fact, this prophecy shows that it has done so for the last six resurrections!

This church-state combine will gain almost total power over people. It enforces its mark. Many people believe that this “mark of the beast” is a physical mark of some kind. But, as Who or What Is the Prophetic Beast? explains in detail, it is a sign— a sign that revolves around the day you worship God. It has to do with one of the Ten Commandments: “Remember the Sabbath day, to keep it holy.” But this religious-political power has enforced and will enforce its day of worship.

In the past, the Holy Roman Empire has wrought great destruction on Earth. Charlemagne, who led one of those resurrections, “converted” people with his armies, and waded through their blood, believing he was serving God. In the Middle Ages, this “holy” empire destroyed some 50 million people. It is a bloody, bloody empire.

These verses are about to be fulfilled in a way that will make all the previous blood shed throughout history pale in comparison. The new Holy Roman Empire will combine the modern, high-tech armies of several nations. Its people will be bound together by the incredible force of false Christianity. Its religious and political leaders will be armed with conventional, chemical and nuclear weapons—and they will use them!

Revelation 13:7 says what the final resurrection of that beast power is about to do. All of God’s lukewarm people, in His own Church—those who knew the truth about these prophecies—will be killed by this monster. Every single one of them! People who are worshiping the dragon will kill God’s people, thinking they are doing Christ a favor.

Satan has labored for centuries to deceive mankind and darken the meaning of what God has revealed in the Bible.

Follow God’s Word, chapter by chapter, verse by verse, and you can see that what is happening in Europe today was prophesied thousands of years ago in your own Bible!

Who understands this today? A lot of religious people and even evangelists won’t even discuss it. They almost ignore it. But here is the truth: This prophecy is being fulfilled now— and now is the time we must understand it! It’s time to stop ignoring this extremely dangerous part of God’s prophecies. It’s time to not just believe in God, but also to believe what God says!

Hosea 4:6 tells us that ignorance is no excuse: God says His people are destroyed because of a lack of Bible knowledge. You need to prove God’s Word.

You need to really understand this beast in detail and really study and prove this from your own Bible for yourself. These prophecies in your Bible are coming alive, and you cannot afford not to understand them.