Genesis 1:1: Mathematical Marvel of the First Verse of the Bible
Beneath this inconspicuous little verse lies a foundation of jaw-dropping numerical harmony
By Staff • Jan. 17, 2023 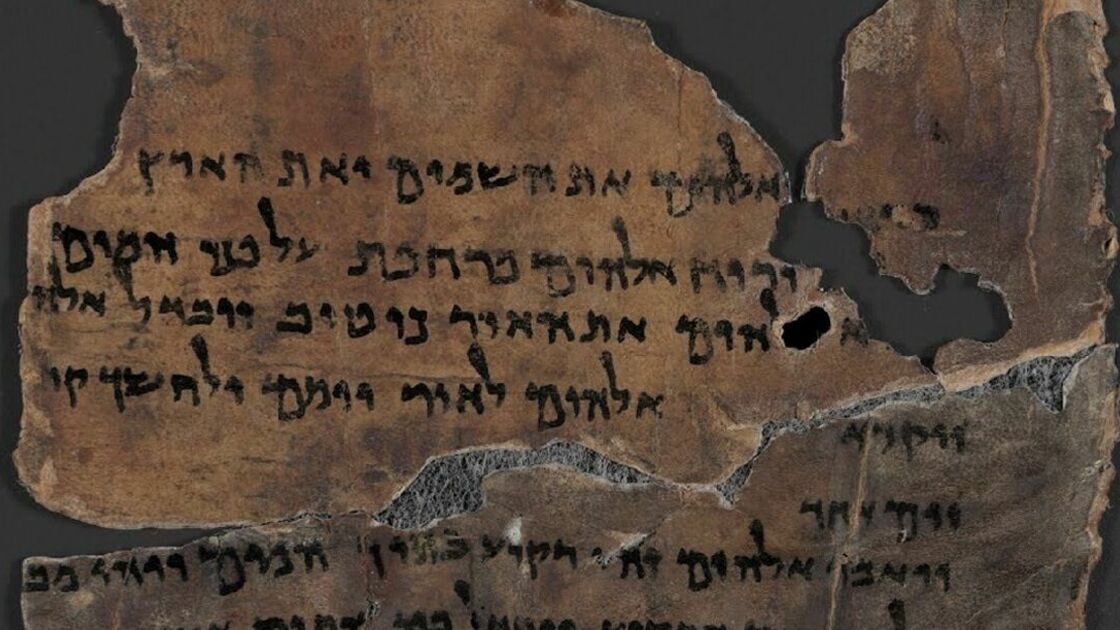 ‘In the beginning God created the heaven and the earth” (Genesis 1:1).

It’s the very first verse of the Bible, one that’s easy to read over and miss entirely something truly remarkable: The layers of mathematical, numerical harmony it is built on.

Many today believe the Bible to be simply the work of imaginative writers over centuries past. Believers, however, take it to be the inspired words of God himself—and that the numerical harmony in verses such as this is one clear evidence of such.

Let’s examine this fascinating verse as a case in point.

There are, of course, several “significant” numbers highlighted with repetition throughout the Bible, such as 12 and 40. But even more ubiquitous is the number seven, a number signifying “completeness.” Sevens, or multiples thereof, are found throughout the Bible. Most famously, there is the seven-day Creation week; the seven annual holy days (Leviticus 23); seven pairs of animals brought onto the ark; seven-year land- and servant-cycles (within a 49-year—seven times seven—jubilee cycle); a seven-week count to Shavuot/Pentecost; the seven-lamped menorah—the list goes on. Reference to the number seven, seventh, seven-fold etc. can be found hundreds of times throughout in the Hebrew Bible. In fact, even the number of times each form of the word is referenced is seven-related—the actual number “seven” appears 287 times (7 x 41); “seventh” 98 times (7 x 14); “seventy” 56 times (7 x 8); and “seven-fold” a total of seven times.

But this number can not only be witnessed in such more obvious, face-value references. There is also an underlying “background” of sevens to the scriptures. Genesis 1:1 is a case in point.

The following is this first verse of the Bible in the original Hebrew (reading from right to left):

This verse can also be considered in the wider Creation account, which spans from Genesis 1:1 through to the paragraph conclusion in Genesis 2:3 (note that the chapter and verse divisions are later additions). This full block of text totals 469 words (7 x 67), made up of 1,813 letters (7 x 259).

But this is only the very tip of the iceberg.

While modern Hebrew utilizes our standard common “Arabic numerals” (0, 1, 2, 3, 4, 5, 6, 7, 8, 9), historically and traditionally, the letters themselves were used to signify numerical value—essentially, A = 1, B = 2, C = 3, and so on. In such manner, this first verse in Genesis, in the Hebrew Bible, is the equivalent of “Genesis A:A.” Thus, each letter of the 22-letter Hebrew alphabet carries a numerical value. See the table below for the Hebrew numbering system. 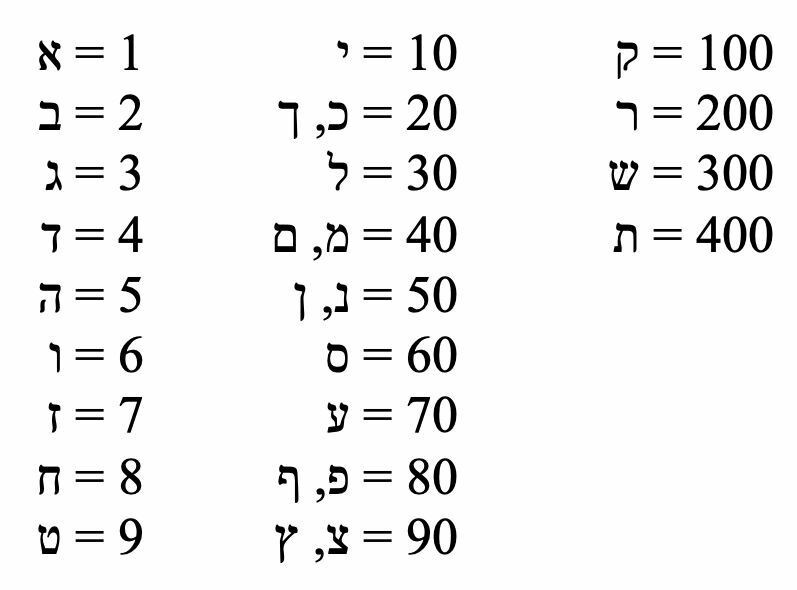 This is the numbering system from “A to Z”—or rather, א to ת. (Note that five of the Hebrew letters change shape when used at the end of a word—these are shown on the list in both their forms. They still represent the same number.) You can see that following the number 10, the letter values increase in tens; and following 100, they increase in hundreds to the last letter of the alphabet. In such manner, letters can be simply joined together to create large numbers. For example, Psalm 119:172 becomes תהלים קיט:קעב.

We can take this and apply it to Genesis 1:1 (alternating the numbers above and below, so as not to confuse them all together):

Now we get into the really interesting bit.

As stated above, this first verse of the Bible at face value contains seven words consisting of 28 letters (7 x 4), which can be divided variously into sets of sevens. With the numerical value of each individual letter now applied, we can make some further observations.

The three leading nouns (God, heaven, earth) have a combined value, not just as a multiple of seven, but of 777:

The value of the first and last letters of the second half of the verse is 91—a multiple of seven (7 x 13):

What about the numerical sum of all the letters? 2701. Aha—THIS isn’t a multiple of seven.

That’s right, it isn’t. But it’s equally as impressive. It’s 37 x 73. There is an interesting relationship between these two numbers (besides simply being an emirp, or reversible prime these are also successive “star numbers” in mathematics). These are numbers that crop up continually in Bible numerics (37 especially—and the numbers 7 and 37 are likewise both geometrically-related, centered hexagonal numbers).

This is all just a small sampling of the numerics related to Genesis 1:1 as well as the wider, Genesis 1:1-2:3 creation account—nowhere near the sum total. The list could go on. The word “God” (אלהים) in the Genesis 1:1-2:3 creation account? It’s in there 35 times—of course, another multiple of 7 (7 x 5). The declaration of the word “good” (טוב), used throughout this account? It’s found seven times. (While we’re on the topic of “good”—טוב—as well as the number 777 found in the first verse of the Bible—contrast this to how often the Hebrew word bad, or evil—רע—is used throughout the Hebrew Bible. Congratulations, you guessed it! 666 times.)

Another point: The Hebrew alphabet, again, has 22 letters. Yet within the 1,813 letters of the full Genesis 1:1-2:3 creation account, one letter, ס, is not found at all. This is particularly unusual, given the sheer quantity of letters in this text—most of the other letters are used tens, if not hundreds, of times. Yet in the theme of this article, the striking, complete lack of this single letter of the alphabet means that simply even the different alphabetic letters used within the text are a multiple of seven: 21 (7 x 3).

Much of this above analysis was highlighted by Russian researcher Ivan Panin (1855-1942), who was originally a committed atheist and nihilist. It was his eventual “discovery” of such biblical numeric patterns that convinced him of the existence of God and that the Bible must constitute a divinely-inspired text, mathematically impossible to create intentionally, let alone by happenstance. Genesis 1:1, of course, is not the only case in point (and it was not, in fact, the verse that piqued Panin’s interest and started him on his journey of investigation—that was John 1:1). Over a 50-year span of work, he collected some 40,000 pages of such calculations. (And his calculations are, of course, by no means exhaustive. Certain of the above points relating to Genesis are in addition to those highlighted by Panin.)

What do you make of it? Can the numerics behind passages like Genesis 1:1 be merely coincidental—or even artificially manufactured by a human author working within the confines of a numerically fixed alphabet?

Or could it be that the holy scriptures—as the Bible itself states—are “God-breathed?