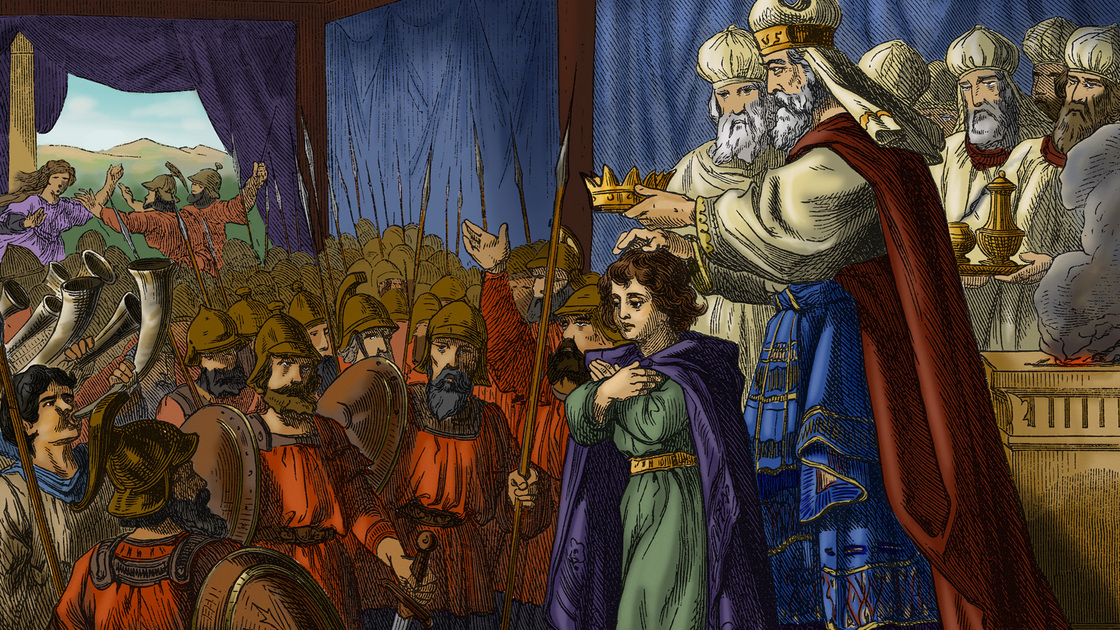 Failing to endure to the end is common in our era. The Bible shows that the dominant spirit in this era of God’s Church is Laodicean, spiritually lukewarm and self-satisfied (Revelation 3:14-22). Like the ancient Israelites who desired to return to Egypt, many true Christians today have given up, abandoned the truth, and turned back to the world, false religion and sin.

In the face of hardship or danger, the human tendency is to want to quit, to indulge in distractions that take our minds off our difficulties, to “bury our heads in the sand.” Human nature always seeks release or escape from physical and psychological hardship and pain. We commonly begin a fight with enthusiasm, but then weaken in the face of challenge and opposition. Even true Christians can grow “weary in well doing” (Galatians 6:9; 2 Thessalonians 3:13).

Have you noticed this tendency in yourself? Have you ever started to learn to play a musical instrument, speak a foreign language, lose weight or establish a regular exercise program with gusto, then “hit the wall” of difficulty and reasoned, I don’t really need to do that anyway? In spiritual matters especially, we must overcome this inclination.

When you begin working to pray for an hour every day, to eliminate a bad habit, to react better toward others, to change your behavior in certain circumstances, to overcome a wrong attitude, or otherwise change your life to obey God better, you will face difficulty. You must punch through the challenge and endure to the end!

Jesus Christ Himself warned true Christians against giving up. Revelation 2 and 3 contain His messages to His Church through seven eras until His return. In those to the Ephesus and Thyatira eras, He warns about enduring to the end (Revelation 2:4-5, 25-26). To the Philadelphia era, Christ says, “[H]old that fast which thou hast, that no man take thy crown” (Revelation 3:11). Most true Christians in this modern era of God’s Church, no matter how zealously they started, failed to hold fast and are now compromising and rebelling against God.

God warns us in Ezekiel 18:24-26 that if we do not endure to the end, then all the “good” accomplished in our lives is wiped away.

Many biblical examples teach the importance of enduring to the end. True Christians are called to rule as kings with Jesus Christ, and the Old Testament books of Kings and Chronicles teach how to be the right kind of kings. These books speak of kings in Israel and Judah who started strong but over time lost the vision and failed to “hold fast.”

Following kings Rehoboam and Abijah in Judah, Asa’s reign started on a solid foundation (2 Chronicles 14:1-5). He was zealous for God, and his zeal extended even beyond the borders of the kingdom (2 Chronicles 15:1-9). This example shows that God is with us when we are with Him.

But later in life, around the last five years of his reign, Asa began to “lose it” (2 Chronicles 16:1-3). He reasoned that he needed to go into a league with a Gentile king, disobeying what God had commanded (verses 7-10). God corrected Asa, but rather than responding with humility and repenting, Asa responded with arrogance and punished the prophet who brought him God’s message. Three years later (verse 12) he faced a serious illness. He had not repented of his foolish and disobedient trust in men rather than in God, and he turned to physicians for healing instead of God.

God was no longer in Asa’s mind, and this was evident in his behavior at the end of his life. Although he started off obediently, King Asa did not endure to the end. He had come to believe that his past righteous acts were sufficient to cover his later shortcomings. God warns us here and elsewhere not to think like that. Our zeal from the past does not exempt us from continuing to follow God in the future, all the way to the end of our lives.

The fifth ruler over Judah after Asa, who lived about 40 years after his rule, was Joash (2 Chronicles 24). He followed the guidance of the priest Jehoiada, and the two worked together to get Judah’s worship of God back on track. But when Jehoiada died, Joash became influenced by the princes around him. He turned further and further from God. By the end of his life, he was so alienated from God that he actually killed the son of his priest and mentor. He had allowed himself to be influenced by Jehoiada, but then allowed himself to be influenced by others; he never learned to rely on God, stand on his own, and endure to the end.

This is exactly what happened to so many true Christians in our lifetimes when a strong “priest,” Herbert W. Armstrong, died. Many had been relying on Mr. Armstrong and not relying on God and building a relationship with Him. When Mr. Armstrong was “taken out of the way” (2 Thessalonians 2:7), they lost their bearings and listened to the “evil princes” who were destroying the Work of God.

The second king after Joash, Uzziah, reigned 52 years (2 Chronicles 26). He sought God while the influence of a priest named Zechariah (not the prophet who wrote a book of the Bible) was present. God blessed Uzziah for seeking Him. Later in life, Uzziah’s fame grew, and the king became presumptuous to the point of going into the temple to burn incense, a grave violation of God’s commandment (verses 16-20). The Jewish historian Josephus stated that it was upon the event of this blasphemy that God brought about the earthquake that is associated with his reign, which cracked the temple (see Amos 1:1 and request The Lion Has Roared).

Uzziah became lifted up in his old age and disrespected God. He took for granted all the wealth and might God had given him. 2 Chronicles 26:19-20 specify that he was struck with leprosy in his forehead, where a man thinks and reasons. It is as if his thinking had become leprous because he trusted in himself. Again, when the priest was gone, it was revealed that he could not “stand on his own” and obey God against contrary influences. Uzziah did not endure. He did not hold fast the successes of his earlier life. He had not developed the faith to resist and endure. He turned from God and started to think he was entitled to perform the duties of a priest, which God commanded against.

God put these examples in His Word for our learning. True Christians are in training to become kings, and God wants us to learn these lessons so we will succeed where they failed.

When speaking to His true Church, Christ admonishes faithful Philadelphians to endure to the end so He can make them “pillars” (Revelation 3:12). That means trusting in God and conquering sin to the end of our lives! This is why the death of a true Christian is precious in God’s sight: Another saint has endured to the end, and another pillar is ready to stand strong in God’s temple!

Paul used another metaphor for enduring to the end: a foot race. Hebrews 12:1 says we must strive and struggle and endure, running all the way to the finish line, or there is no reward.

Enduring to the end requires having and living by God’s Holy Spirit, the power of God. This supplies us with God’s love—real love for God, His law and His government—a love that “endureth all things” and “never faileth” (1 Corinthians 13:4-8). This is the power you need to endure to the end!

It is clear, then, that those who do not endure to the end lack God’s love. The Laodiceans went astray because they did not have “the love of the truth” (2 Thessalonians 2:10).

Satan, society and our own selfish natures constantly try to pull our minds and hearts away from God. But if we use God’s Spirit to believe and obey Him, nothing can separate us from the love of God and prevent us from enduring to the end (Romans 8:35-39). If something separates you from the love of God, it’s because you have allowed it to do so, just as these kings of Judah allowed themselves to be separated from God by their own vanity, by trusting in themselves, or by listening to princes and other evil influences around them.

Do you allow God’s love to reign in your life? Do you love God, His law, His government, His way of life above all else? Do you obey the first and great commandment of love toward God above all else? (Matthew 22:37-38). This is the essence of faithfulness, loyalty and fidelity to God and His commands.

Remaining faithful to the end is the final step in the character-building process God is working in our lives. Jude 1 shows that God sanctifies (sets apart) certain individuals, preserves them, then calls them and imparts to them His Holy Spirit, making them His Spirit-begotten children. The vast majority of mankind have not experienced this. Few have understood it or even heard of it. But this process shows that God carefully considered the life of each person that He calls to become a true Christian. But calling is only the beginning.

Revelation 17:14 additionally shows that if and when you are “called” by God, you must act on that calling: You must repent, be baptized and receive God’s Holy Spirit. At that point, you have been “chosen.” But to be “faithful,” you must be loyal by fighting and overcoming sin all the way to the end.

The word “faithful” means loyal and true to what one has been taught. But it also means to be full of faith. Faith and obedience are key factors in the love of God. If you add what God teaches in Jude to what He teaches in Revelation, a true Christian must be sanctified, preserved, called, chosen and faithful.

If God has called you to be a true Christian, He has called you to a lifelong, spiritual life-and-death commitment. If you have answered that call and have received God’s Holy Spirit, this life is your one opportunity to be faithful to the end. There is no reward for stopping now! God has given many examples to learn from, both from the Bible and the tragic ongoing Laodicean failure that we see around us. Let’s follow our Savior’s example, warnings and exhortations, and endure to the end.