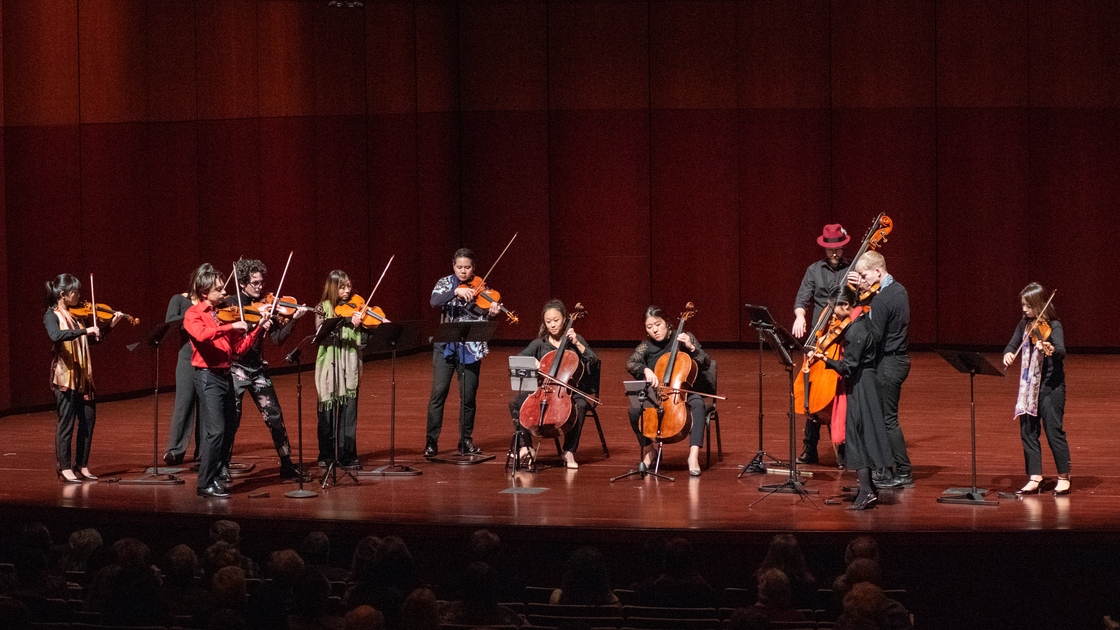 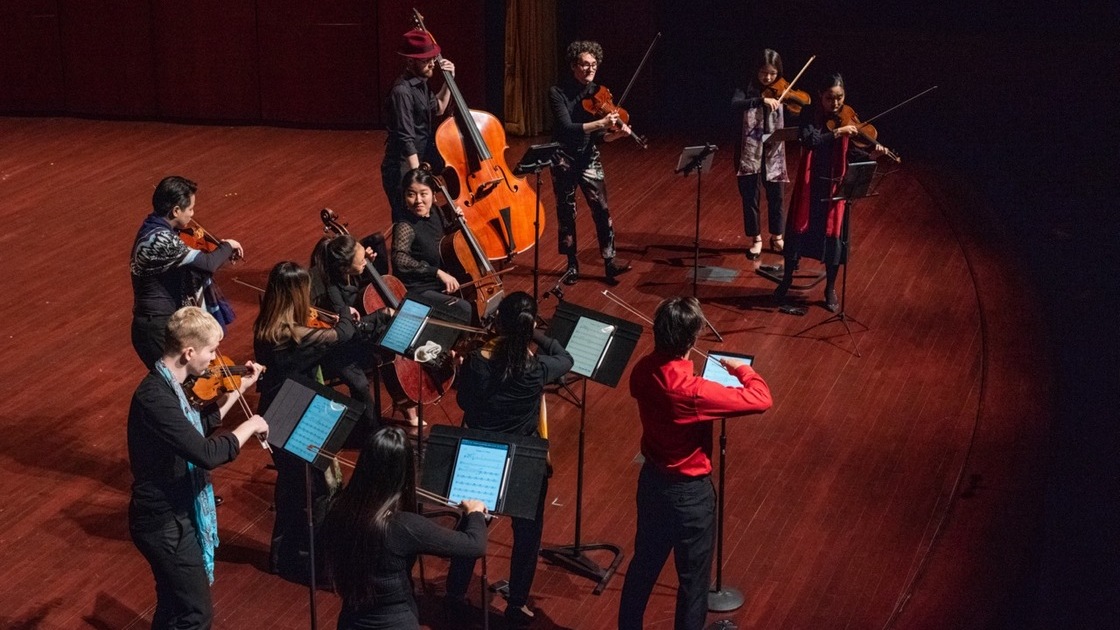 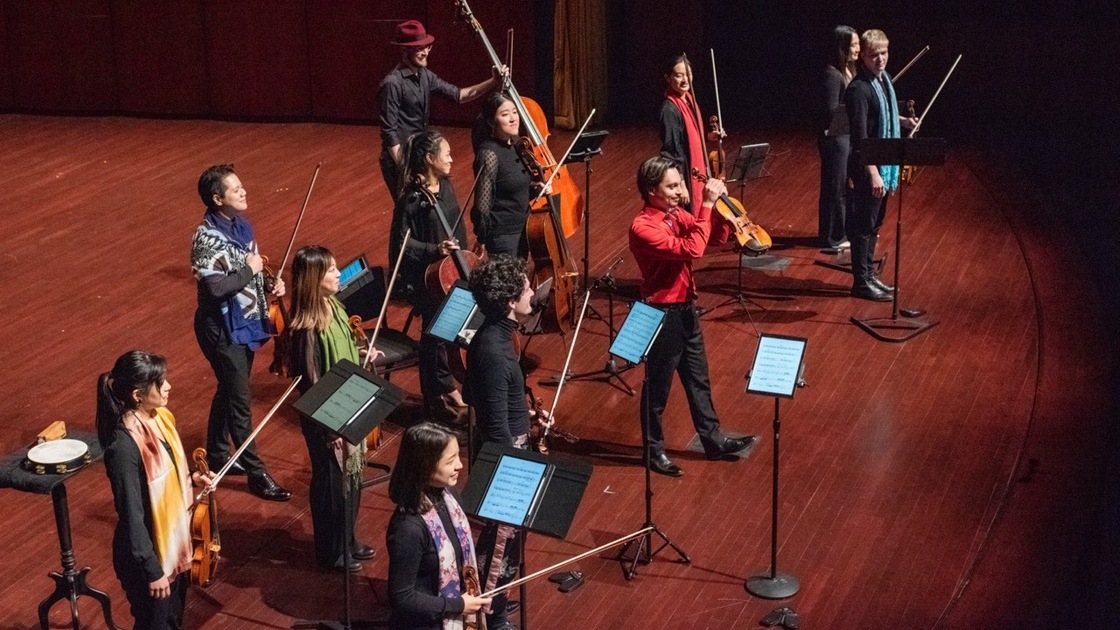 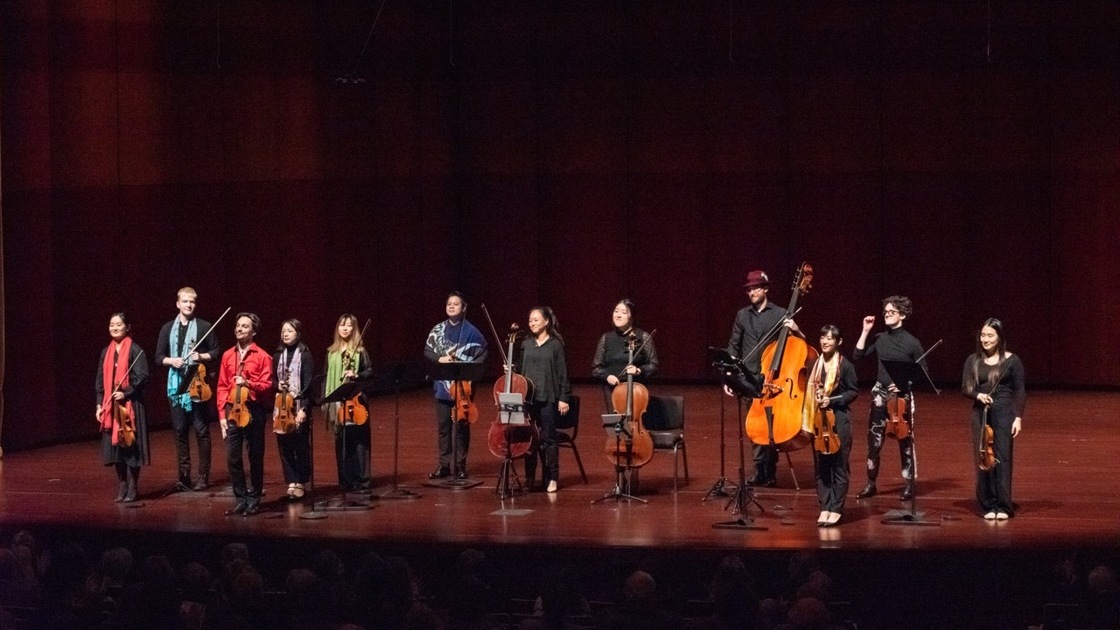 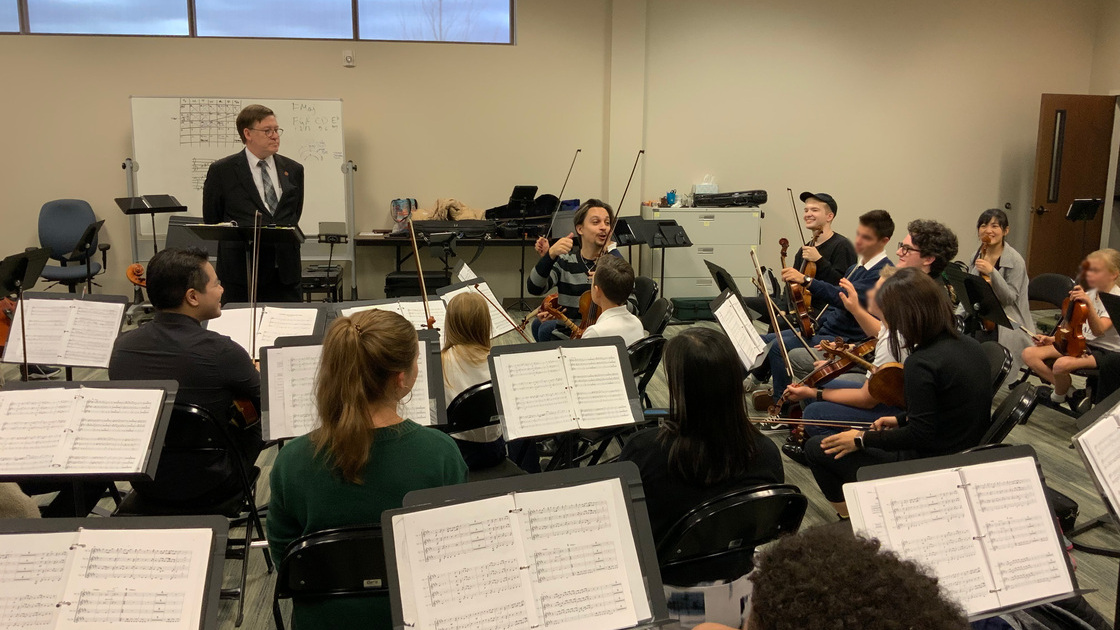 OKLAHOMA—The theater of Armstrong Auditorium filled with music, applause, laughter and more than one memorable moment shared by musicians and audience members on December 1 with the performance of Delirium Musicum.

The 12 string players, described by music director Etienne Gara as an expanded quartet, began the evening with “Rodeo” by Aaron Copeland, an energetic piece with a distinctly American sound for a central Oklahoma crowd, played with equally energetic enthusiasm, movement and broken bow strings by the contemporary baroque Southern California group.

Next, the 300 or so audience members, many of whom regularly attend Armstrong concerts, shared a moving experience with Quartet No. 8, Op. 110, by Dmitri Shostakovich. The performance was the best that staff member Seth Malone, a fan of Shostakovich, said that he had ever heard. But what moved members of the audience was the story. Gara introduced the five movements by relating that the composer wrote them, in just three days, as his own epitaph upon being forced into the Communist Party in 1960. Gara said that when musicians finished playing the last movement for Shostakovich, he was holding his face in his hands, and they left without a word.

The audience too was completely silent as the angst of the music flowed around a sad-yet-sweet tune from the cello evoking memories of a better life. As the final notes of that same final movement diminished within the walls of the Armstrong theater, the crowd was still for several moments, sharing a strong sense of emotion. One concertgoer called the room “frozen by the chilling, deadening silence.”

The moment was powerful “because their performance of the piece was so heartfelt,” one concertgoer said. “They seemed to feel the plight that the composer suffered when he wrote it. There was actual silence as the last note died out and the audience, for a brief few seconds, shared together in the somberness of the moment.”

Then the applause erupted, with a significant number of concertgoers giving the group a standing ovation, unusual for a piece of this kind, especially played in the middle of a concert.

Next came “Paris Concerto No. 5 for Strings in C major,” which music director Ryan Malone called “some of the happiest Vivaldi you’ll hear.”

After intermission, the audience heard “Prelude in C Minor BWV 847,” from Johann Sebastian Bach’s The Well-Tempered Clavier, followed by “Melody” from Myroslav Skoryk and then “String Quartet, D. 810 (‘Death and the Maiden’)” by Franz Schubert.

Mr. Malone said the performers “put our audience at ease; they explained context for the pieces they played.” This included encouragement for audience members to react, to involve themselves in the music, to clap between movements. For Schubert’s composition, Gara described how the members of Musicum Delirium had to “give something of ourselves” to each other while playing so that they could give an experience that is “nearly spiritual” to each other and to the audience.

After Francesco Geminiani’s “La Follia,” the final piece on the program, applause reverberated off the cherry paneling and concertgoers continued to stand and clap until Gara led the group in the encore, “Winter” from Antonio Vivaldi’s Four Seasons.

“This particular orchestra embodies much of what we’re trying to do artistically at Armstrong,” Mr. Malone said, “connect people to the very real human aspects of musical expression. Somewhere along the line, concerts became really serious, stuffy, snobby …. So when an artist comes that wants to challenge that and make real connections with the audience, that is exactly what we’re about.”

Earlier in the day, the 12 musicians visited Imperial Academy, the K-12 school that, like the Armstrong International Cultural Foundation, is sponsored by the Philadelphia Church of God. They sat among the students in the orchestra room, playing excerpts from “La Folia,” and helping them rehearse for tonight’s fall semester honors recital.

“This was an incredibly incomparable 45-minute session,” Mr. Malone said, “as they shared wonderful insights and tips for our students.”

The performers thanked the audience for the warm welcome and said that they had enjoyed their first time in Oklahoma. The concert series continues on January 12 with the Five Browns.