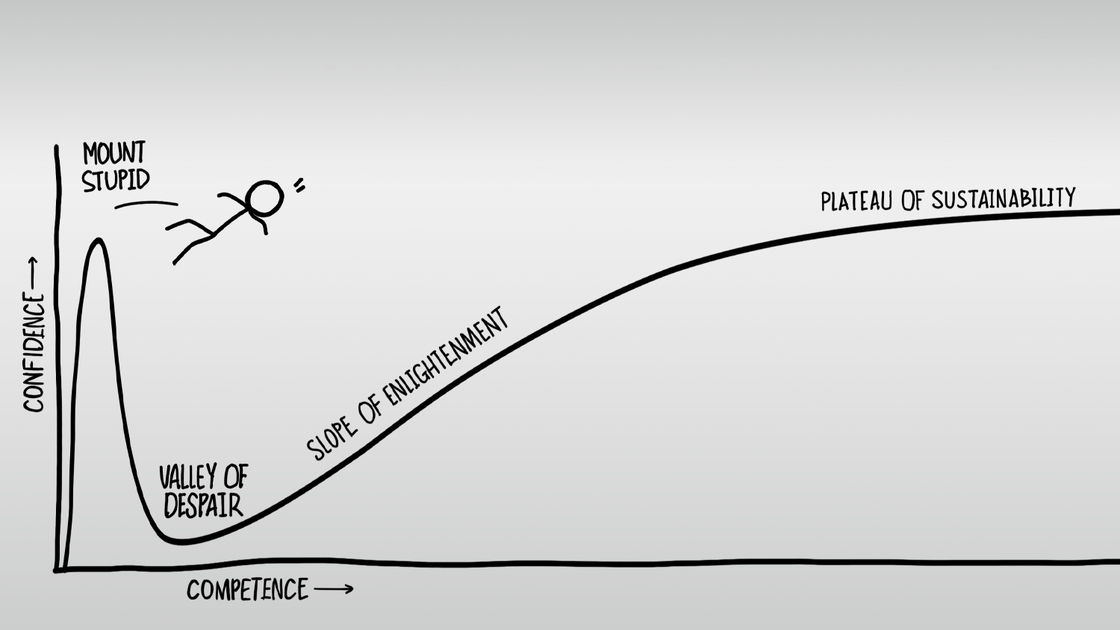 If you think you are average at something, that means you are right in the middle: Half of the people out there are better than you, and half are worse. Do you know what percentage of American drivers rate their own driving ability as above average? One study found that it was 88 percent.

Over 100 studies have found that people tend to rate themselves above average in a lot of areas: leadership skills, managing money, reading people’s emotions, grammar, their health compared to other people’s and even their sense of humor.

Those who overrate themselves the most are the people with the least ability—even to the point of rating themselves as high as experts. It is a human tendency to think you understand a skill or subject proficiently when you are first learning. You are prone to wildly overestimate your understanding of the subject—you think you are way more awesome than you are. This tendency is called the Dunning-Kruger effect.

The story of how this was discovered is hilarious. David Dunning learned about a bank robber in Pittsburg who was shocked when he was caught for committing a blatant crime. Why? Because he had learned that lemon juice is used as invisible ink, so he put it on his face thinking it would make him invisible. When this robber was asked what he was doing, he responded: “I don’t understand; I wore the juice!” Dunning could not understand how someone could be so stupid.

Dunning and Justin Kruger began to conduct experiments. They had people rate themselves on various subjects and then gave them tests that measured their understanding more objectively. They learned that people consistently rate themselves as more competent than they actually are in most things.

God emphasizes the importance of humility in Matthew 11:25: “At that time Jesus answered and said, I thank thee, O Father, Lord of heaven and earth, because thou hast hid these things from the wise and prudent, and hast revealed them unto babes.” The word “wise” is used in other verses to describe God; “prudent” in this verse means intelligent, having understanding. But Christ is not talking here about true wisdom or real prudence. He is talking about people who think they are wise and prudent to the point where God can’t teach them. The lesson is that you cannot understand spiritual truth without a humble, teachable attitude.

This principle also applies to physical understanding. You need the virtue of humility to learn anything in life—you need a “teach me” attitude. Satan broadcasts vanity, resentment of authority and self-love, which causes us to easily become stubborn, unteachable and difficult to work with. If you are going to learn, for example in your classes at school, it is critical to have a sense of how much you need to know.

Build an accurate picture of yourself: of what you know and don’t know. Start by realizing how much you need God. Also, assessing yourself in comparison with others can be helpful in evaluating where you have talents and abilities and where you have weaknesses. Ask yourself: In what areas should I be seeking help and advice from others? Recognize how susceptible you are to overestimating your abilities.

1 Corinthians 8:1-2 read, “Now as touching things offered unto idols, we know that we all have knowledge. Knowledge puffeth up, but charity edifieth. And if any man think that he knoweth any thing, he knoweth nothing yet as he ought to know.” You don’t know what you don’t know, and you are ignorant of your ignorance! Knowledge puffs up, so don’t overestimate your understanding. If you claim to know all the answers, then you really don’t know very much.

View this from God’s perspective—He knows everything! Compare your perception to what God knows! How does He view the high-and-mighty thinkers of the Earth?

The lower a person’s talents or abilities, the more he tends to overestimate himself. The research shows a direct correlation between a person’s lack of intelligence and a high confidence in his intelligence. Stupid people rarely think of themselves as stupid.

Dunning and Kruger developed a chart of the correlation between confidence and competence (pictured above). The diagram shows a dramatic rise in confidence on the vertical axis when there is comparatively little competence on the horizontal axis. That first spike in confidence is called Mount Stupid—an irrational confidence. As you learn more, you begin to realize just how much more there is to learn, and you fall to the Valley of Despair. As competence increases, confidence decreases. The vastness of knowledge on the subject causes the individual to lose his spark of confidence. He realizes how irrational his confidence was. But then, as competence continues to grow, he gradually gains back confidence as he learns the true depths of the subject. This increase in confidence and competence is called the Slope of Enlightenment. Once someone has become proficiently competent in a subject he has arrived at the Plateau of Sustainability.

What we want to do is cut off Mount Stupid altogether! This is a fantastic reason to stay humble.

1 Corinthians 10:12 says, “Wherefore let him that thinketh he standeth take heed lest he fall.” God is warning against irrational confidence. He wants you to see yourself as you really are.

The Dunning-Kruger effect shows that when people lack knowledge and skill, they commit two errors: 1) They make mistakes. 2) They don’t realize they are making mistakes.

Poor performers lack the real experience to realize how badly they are doing. The Dunning-Kruger Effect is invisible to the one experiencing it—because you don’t realize when you don’t know things. An embarrassing reality is that our brains have a natural, egotistical bias: We love ourselves and do all we can to make ourselves look good. Herbert W. Armstrong described this as: Human nature wants to appear and think of itself as good, but it does not necessarily want to do good.

1 Timothy 3 describes the requirements of the ministry, and verse 6 says, “Not a novice, lest being lifted up with pride he fall into the condemnation of the devil.” There is a danger in a lack of experience, maturity and perspective, because you become more vulnerable to pride. Generally, the more we learn, the more we realize how much we don’t know. Build an accurate picture of how much you need God.

Proverbs 16:18 says: “Pride goeth before destruction, and an haughty spirit before a fall.” The more vanity you have, the more susceptible you will be to falling into the Dunning-Kruger effect. Purge your vanity!

Dunning and his colleagues performed another experiment where they asked people if they were familiar with a variety of terms related to several subjects. Within the subject-related concepts, they inserted made-up terms. In one study, 90 percent of the respondents claimed they had an understanding of these fabricated terms. The more dogmatic they were about their supposed understanding, the more they said they knew about these bogus terms.

The Dunning-Kruger effect shows us that human nature will do anything to look good—even to the point of making up facts.

Here are some tips to apply in order to protect yourself from the Dunning-Kruger effect.

First, ask God for an honest, accurate perspective. Ask Him to show you your heart, secret sins and blind spots. Check out the Laodicean example in Revelation 3:17-18—they cannot see that they are wretched, miserable, poor, blind and naked. This self-deception is the hallmark of the Laodicean spirit. Christ wants to clothe them and anoint their eyes so they can see their spiritual state. God wants to protect us from the Laodicean attitude and help us see ourselves in reality. God has to reveal to us the plague of our own heart.

Second, ask for feedback from other people. Seek out an objective opinion and perspective and be willing to take the correction that comes with it.

Third, keep learning—don’t ever assume you know everything. Focus on improving your competence and ability. The more knowledgeable you become, the less likely you are to be unaware of your own incompetence.

Fourth, build confidence in God. God wants you to be confident—but not irrationally confident. Have the spirit of being willing to go for it even when you don’t know what you are doing. God’s Work has benefited a lot from a “can do” spirit. When you strive to have confidence in God, you will gradually build confidence as you gain competence. Allow God to build the right kind of confidence. Remember the admonition in Philippians 4:13, “I can do all things through Christ which strengtheneth me.”