Know Your Bible: The Beauty of Encouragement
One of God’s most positive attributes—that He wants you to share!
By Mark Jenkins and Seth Malone • Nov. 29, 2022 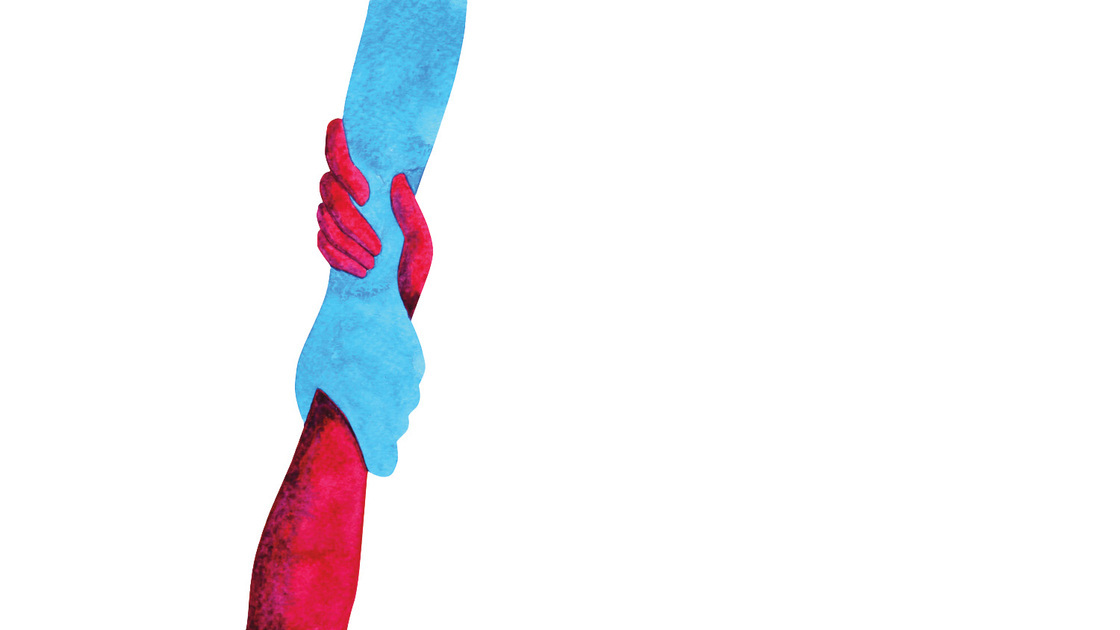 In a world full of mass shootings, skyrocketing inflation and stolen elections, how can you stay encouraged? How can you encourage others? Encouragement is a vital need in our lives. How much impact can you have as an encourager—a bringer of hope?

We may accept it as a normal part of life to feel discouraged at times. But discouragement is one of the most powerful and devastating emotions there is. It is a negative force that stifles growth, drains enthusiasm, inhibits drive and disorients your mind. Of all the causes of failure in life, discouragement is probably one of the most difficult to overcome. Do you know how to be an encourager?

Let’s look into the Scriptures and see what God says about the beautiful quality of encouragement and those who practice it—and the hope we as God’s people bring to the whole world.

When you feel down or discouraged, pray for encouragement! God can send it in many different ways and through many different people. For instance, Herbert W. Armstrong said his first boss, at age 16, said he “could see qualities in me that were destined to carry me to large success in life. He constantly expressed great confidence in me, and what I would be able to accomplish, if I were willing to put forth the effort” (Autobiography of Herbert W. Armstrong). That encouragement was the turning point of his life!

If you receive encouragement from people around you, not only does that strengthen you, this will give you the motivation and strength you need to be able to encourage others. You will become a bringer of hope!

Can you make a difference in how a friend or peer is feeling merely by what you say to him? Proverbs 12:25.

In the Revised Authorized Version, Proverbs 12:25 reads: “Anxiety in a man’s heart causes depression, but a good word makes him glad.” If you find that one of your peers is lacking courage or strength of purpose, you can encourage him or her with a kind word or a sincere compliment—just as Mr. Armstrong’s first boss did for him.

The Son of Encouragement

There once was a rich Levite named Joses, a native Cypriot. He was called, baptized and became a converted member of the Church of God. The apostles in Jerusalem noticed something different about Joses. He had a character trait so obvious that they didn’t think “Joses” fit him. So they gave him a nickname to better suit him.

Upon being released from prison, whom did Peter and John seek out? Acts 4:23.

“[T]heir own company” refers to the local congregation Peter and John would have been serving. Mr. Armstrong used this example in Mystery of the Ages to demonstrate the need for supportive, encouraging congregations today. And it was these events that led to verse 36: the introduction of Joses the Cypriot.

What was that stellar character trait Joses had that actually compelled the apostles to change his name?Acts 4:36.

In the early weeks of the fledgling Church, the wealthier converts sold real estate and other possessions to share with the more needy brethren. Amid all of the brethren who gave, only one person is named specifically as an example of this generosity: Barnabas, the “son of consolation,” or, as the Revised Standard Version states, “Son of encouragement.”

The use of this name encouragement is significant. The Greek word has also been translated “consolation” or “comfort.” Barnabas encouraged the brethren to continue keeping the faith “with purpose of heart.” What kind of difficulties would the Syrian brethren face? They would need to be encouraged through all of that. And Barnabas gave them that encouragement.

There was another inspiring act of encouragement God needed Barnabas to fulfill. Which member in Jerusalem was being discouraged by negativity from others in the congregation? Acts 9:26.

We all know how hard it is to fix a bad reputation. Remember, Saul of Tarsus was one of the Church’s fiercest enemies within recent memory (Acts 8:1-3; Acts 9:1-2; Galatians 1:13-14; I Corinthians 15:9). Despite having repented and been converted, the disciples there were understandably afraid of him. The Bible says Saul “assayed” to join with them, meaning he kept trying really hard over and over again, only to remain discouraged. However, God knew how to fix this.

Barnabas was different. He viewed Saul from God’s perspective, and he went right to him and stuck by his side. As a result, Saul was able to immerse himself into the Jerusalem congregation, “with them coming in and going out.”

Barnabas teaches us an important lesson here about how to be an encourager. He didn’t just say encouraging words, but he took encouraging action: going right to the apostles to vouch for Saul. Barnabas wasn’t defending sin or making light of the fact that Saul had murdered Christians. Rather, he was saying, “Look, Jesus Christ personally called this man, and if Jesus Christ has forgiven him, then we should too!” Barnabas was able to do this because he had God’s perspective.

This means that the name Barnabas has essentially the same meaning as the word Jesus used to describe the presence of the Holy Spirit! Barnabas was able to encourage others just as the indwelling of the Holy Spirit comforts a converted Christian.

Barnabas must have exemplified this trait in an outstanding way. This unique individual was warm and encouraging. He was positive and uplifting. He saw the best in people—overlooking the differences that could produce personal prejudice. And God used this trait powerfully. This virtue was used to open the possibility of membership in the early Church to converts of all nations, including Gentiles!

Due to severe persecution, true Christians were “scattered abroad.” Although this seemed like a trial, did the persecution lead to the gospel spreading even farther? Acts 11:19. At this point, did some of the brethren begin to spread the message to the Greeks living in Antioch, who were Gentiles? Verses 20-21. When the Church leaders at headquarters in Jerusalem heard this news, whom did they select to travel to Antioch and investigate? Verse 22.

Barnabas arrived at Antioch and found that the Work of God among the Greeks was genuine. Being the positive, warm fellow he was, Barnabas was delighted. He “encouraged them all that with purpose of heart they should continue with the Lord” (verse 23, New King James Version). Unhampered by pride and preconceived notions, he could see the potential for conversion in the Gentiles—and he encouraged and strengthened them.

When the work in Antioch grew too quickly for Barnabas to keep up on his own, whom did he call on to assist him? Verses 25-26.

Barnabas was filled with the Holy Spirit—the Comforter—just as his name means (verse 24). Barnabas lived up to that name! He stands out to this day for the special ability he had to see the good in others and encourage them.

Barnabas was willing to give someone another chance. He was able to look beyond the obvious to recognize a person’s inner character. He was 1 Corinthians 13 in action. Many think that when the Apostle Paul referred to “the brother, whose praise is in the gospel throughout all the churches” (2 Corinthians 8:18), he was talking about Barnabas.

Strive to be a son of encouragement like Barnabas! Encourage your peers like Barnabas encouraged Paul. You never know—you may give them just the boost they need to go on and do great things for God!

The Psalms give us great hope for times when we need encouragement.

In your greatest hour of distress, what should you do? Psalm 120:1. If we ever feel like the burden on our shoulders is too great, where should we look? Psalm 55:22. Can we, in the proper attitude, expect to actually be delivered out of every last affliction we have? Psalm 34:15-20.

These particular psalms were all written when David was pressured by enemies, such as Saul or Doeg. But when he cried out to God, he knew he was heard! Psalm 34 gives a deep insight into 2 Corinthians 7:6. Remember, God comforts those that are “cast down,” the same who are of a “broken heart” and a “contrite spirit.” When we endure afflictions, we are often humbled. But God, the encourager He is, delivers us “out of them all”!

God, the great encourager, saw it necessary to refrain this encouragement over and over again in the ears of Joshua. But it was not the first time Joshua heard these words. Moses gave him the same admonition in Numbers 13:20, where Joshua was sent with 11 others to spy out the Promised Land. Upon returning, Israel received an evil report from 10 of the 12. Joshua actually tried to encourage them himself, for which he was almost killed! (see Numbers 14).

Joshua then had to endure 40 grueling years of discouragement, watching Israel complain about coming out of slavery. God definitely saw it necessary to encourage Joshua as He did.

“Without the fervent and prevailing continual prayers of all members the Work could not be accomplished,” Mr. Armstrong wrote in Mystery of the Ages in chapter 6 about the mystery of the Church. He continued, “Without the continual encouragement [his emphasis] of lay members and those over them locally, those of us operating from headquarters could not bear up under the persecutions, oppositions, trials and frustrations.”

Lay members, though called to be teachers tomorrow, are called to be encouragers today! Mind you, Mr. Armstrong didn’t just write this in a co-worker letter or a Plain Truth article; he ensured it was etched in Mystery of the Ages—the second-most important book ever! Just like Barnabas in the first century, God wants us all to be “sons of encouragement” in the end time.

What end-time event should motivate our encouragement? Hebrews 10:23-25, especially verse 25.

These are times of urgency! And we are told to exhort—encourage—“so much the more, as [we] see the day approaching.” That day is approaching, and quickly! We all need encouragement.

As God encourages us, we too should encourage others. As God loves us, we too should love others. And God gives us His law—a law of love—to teach us how to love (Matthew 22:37-40). If we keep the law—if we ourselves actively show love to others—then we can have faith that God will encourage us when we need it the most. Encouragement, as reciprocal as it is, is among one of God’s most beautiful characteristics.

Learning to be a sincere encourager will be rewarding because that is how God’s law of love works!