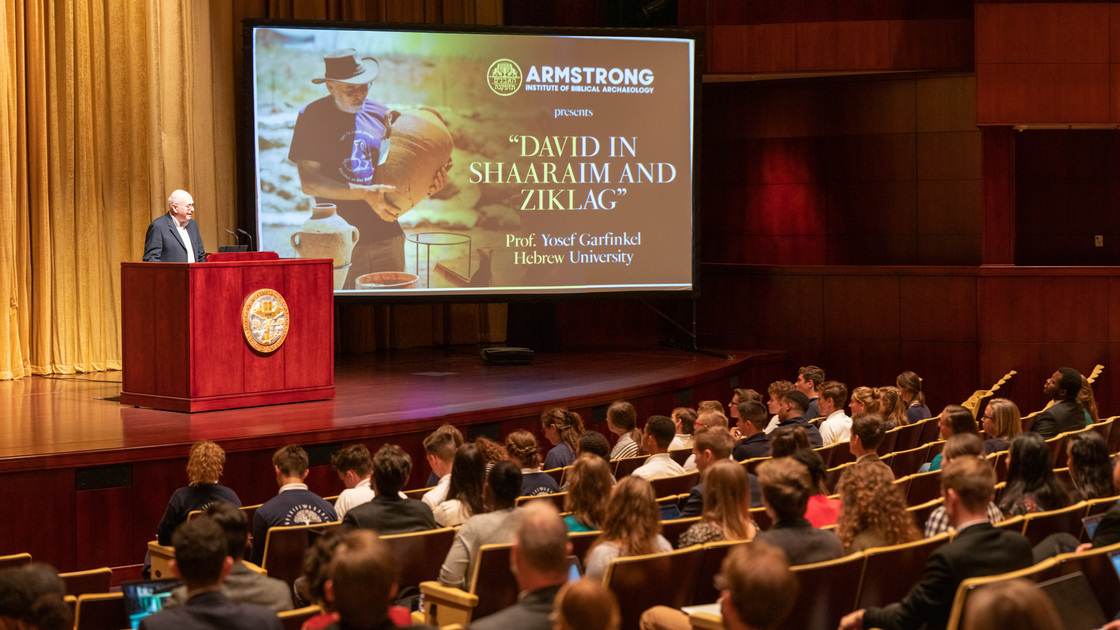 OKLAHOMA—Hebrew University biblical archaeology professor Yosef Garfinkel visited the Herbert W. Armstrong College campus from November 9 through 11, giving a lecture about some of his excavations in Israel to about 200 staff, students from the college, students from Imperial Academy and about a dozen guests from the public.

In his excavations at Khirbet Qeiyafa Garfinkel found remains of a 5.6-acre city with two gates that dated to 1,000 BCE, the time of King David. He also excavated at Khirbet el Ra’i, a 4.2-acre site where remains of a small village were found. In his 2017 excavations of Lachish, Garfinkel discovered an ivory comb, reported by several international news outlets on the same day he arrived in Oklahoma City. The comb bears the oldest sentence-long Canaanite inscription yet discovered, and researchers believe it was made around 1700 BCE.

Garfinkel said he hopes to conduct archaeological excavations in Jerusalem in the Ophel and in the City of David, a continuation of the late archaeologist Eilat Mazar’s Iron Age excavations in those areas. Since 2006, Herbert W. Armstrong college students have assisted Mazar in her excavations and in publishing her discoveries, which included King David’s Palace, Nehemiah’s wall, the Solomonic Wall as well as the seal impressions of King Hezekiah and Isaiah. Graduates employed at the Armstrong Institute of Biblical Archaeology in Jerusalem have assisted Garfinkel with work related to the Ophel.

During his visit Garfinkel also dined with institute staff including founder Gerald Flurry, attended an Armstrong International Cultural Foundation concert and visited one of the college and academy dance classes. He has written a book on ancient dance, and has studied it quite extensively, so he was interested.

Garfinkel’s visit follows visits by consul general Meir Shlomo in 2014, consulate representative Beylanesh Zevadia in 2008 and Ambassador Yoram Ettinger (ret.) in 2009, both of which delivered addresses to the student body. Armstrong college was one stop of many for Garfinkel, as he visited three colleges and universities in Virginia and the Carolina’s before coming to Edmond and is heading on to Detroit and then Boston for the American Society of Overseas Research conference.