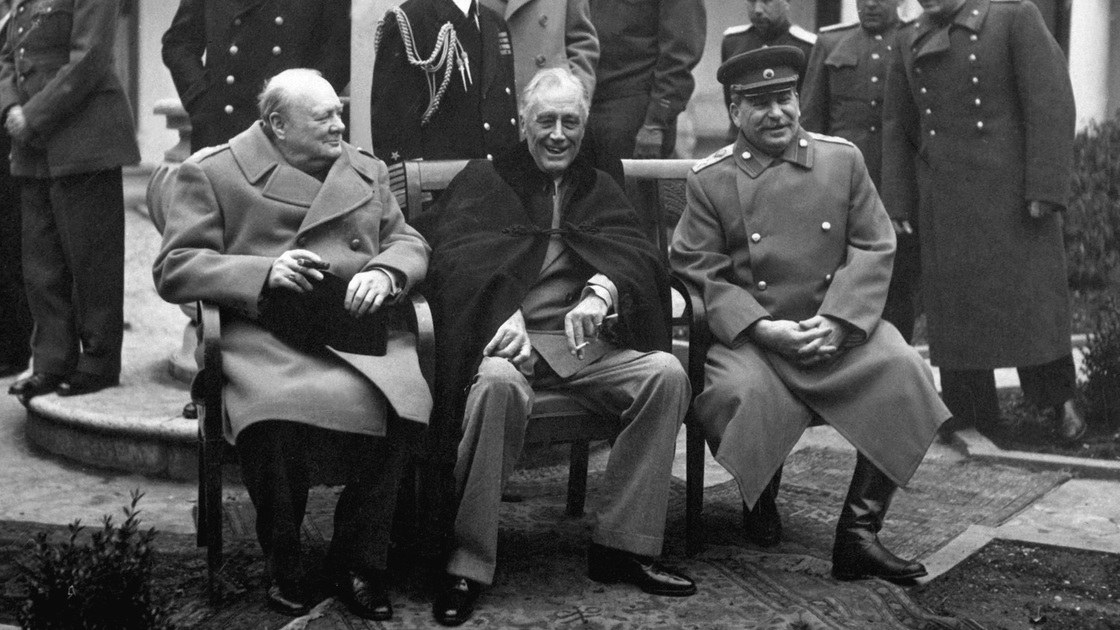 The World War ii alliance between Great Britain and the Soviet Union is one of the most unique alliances in mankind’s history. One power was a constitutional monarchy, a capitalist democracy and a worldwide empire; the other was the world’s first Communist state—a revolutionary, totalitarian dictatorship. Yet when Adolf Hitler’s Nazi Germany threatened both, London and Moscow set aside differences and came together in a grand alliance. This required British Prime Minister Winston Churchill to develop a working relationship with Soviet General Secretary Joseph Stalin.

Churchill was no friend to communism. He even compared Soviet Russia’s founder Vladimir Lenin to “a culture of typhoid or cholera” and “a plague bacillus.” But when the fate of his country—and the world—relied on cooperation between Britain and Russia, Churchill set aside his personal feelings and did what was necessary, establishing a working relationship with Moscow through three main actions.

When the greater threat of Nazism came on the scene, Churchill put his best foot forward for the Soviets. Many in the British government, including the acting prime minister, were not eager for such an alliance when the Soviets made overtures to create one with Britain and France. But not only did Churchill encourage this, he spoke favorably about Stalin when giving speeches.

During the early days of the war—a war that Stalin helped start—Churchill tried to set up a hotline of communication between Stalin and himself, though Stalin refused. Churchill even tried to warn Stalin ahead of time that Hitler was planning to betray him. When Hitler finally launched Operation Barbarossa (his invasion of the Soviet Union), Churchill immediately prepared a speech in support of the Soviets. In it, Churchill reaffirmed his past opposition to communism, but he said that “all this fades away” with what Hitler was doing. Churchill stated Stalin’s legacy, “with its crimes, its follies and its tragedies flashes away.” Stalin had little choice but to work with Churchill to defeat Hitler, but Churchill’s charm-offensive undoubtedly made it easier to work with Stalin during the war.

After the invasion of the Soviet Union, Stalin gave Churchill a list of exorbitant demands. He presumed that Churchill would immediately send British divisions to the eastern front and open up two other fronts in France and the Arctic. He also demanded that Churchill send unrealistic amounts of military equipment to the Soviet Union (including 400 aircraft and 500 tanks per month). London would have been unable to deliver such demands, and Churchill denied the requests. Even with the desperate situation England was in, and with the level of resources and manpower the Soviet Union offered, Churchill was not prepared to let his country become a vassal of Moscow for the sake of victory.

But Churchill still tried to help Stalin where he could. In the opening days of the war, Churchill sent his commandos on raids in Norway and Italy to give the Germans trouble. This would not have halted the German eastward advances, and the raids caused more British casualties than desired, but Churchill still authorized the campaigns to show Stalin he wanted to help any way he could.

Churchill told his war cabinet he expected all departments to give generously to the Soviets. America was giving munitions and other supplies to Britain through lend-lease; Churchill promised the same to Stalin. William Manchester and Paul Reid wrote that Churchill “was eager to prove himself Stalin’s friend.”

Stalin did not always respond well to these overtures. The notoriously icy dictator barely trusted anybody in Moscow, let alone the leader of a capitalist democracy. But Churchill nevertheless did what it took to keep the relationship between London and Moscow amicable. And the results speak for themselves: Churchill and Stalin (with help from America) won World War ii.

3. Never let your guard down.

Despite the assurances in meetings like the Tehran Conference, Churchill still suspected that Stalin would not live up to his agreement not to invade Poland. So on May 22, 1945, Churchill was given a report from his joint planning staff regarding Operation Unthinkable: war with the Soviet Union. The overall objective of this plan was to “impose upon Russia the will of the United States and the British Empire,” and their will was “a square deal for Poland.” Churchill even contemplated enlisting what was left of German war-making power against Russia.

Operation Unthinkable never came to fruition, but it shows that the British government under Churchill was seriously contemplating a future war with the Soviet Union and took precautions for it—even to the extent of being willing to use a nuclear first strike.

The atomic bomb itself was partially conceived by Churchill as a deterrent against the Soviet Union. Churchill made sure to conceal America’s and Britain’s development of the Manhattan Project from the Soviets as much as possible. Soviet intelligence had known about the atomic bomb’s development since 1941, but both the British and the Americans were so secretive about it that U.S. president Harry S. Truman assumed Stalin had no idea about the atomic bomb all the way up to the 1945 Potsdam Conference.

If the Soviets were permitted to take part in developing the Manhattan Project, they could have developed their own nuclear bombs much earlier. The first Soviet atomic weapon was tested in 1949—four years after “Little Boy” and “Fat Man” were dropped on Hiroshima and Nagasaki. The Americans and the Soviets almost went to war with each other during the Berlin Blockade of 1948. If the Soviets had already developed a nuclear arsenal of their own by then, all of civilization would have been at risk.

Not all of Churchill’s tactics ended up working in his favor. Stalin did outmaneuver the West by taking control of Poland, and he did eventually develop his own nuclear weapons. But it’s easy to forget that Britain almost lost the Second World War. Before the Soviet Union and the United States entered the conflict, the British Empire was fighting Nazi Germany alone. Given Churchill’s past opposition to communism, when the Soviet Union was finally invaded, it could have been difficult for London and Moscow to coordinate with each other. If Hitler could have kept Churchill and Stalin divided, he very well could have won the war. Because Churchill knew how to deal with Stalin, Hitler was defeated, and Europe was freed from Nazi imprisonment.

Churchill’s relationship with Stalin is a model of how we can deal with the “Stalins” in our personal lives. We sometimes must work with people we do not trust or like—and who don’t like us. Herbert W. Armstrong had to interact with the Communist government of Czechoslovakia to organize the Feast of Tabernacles in that country, despite it being officially atheist and hostile to religion. Of course, these points should not govern how we interact with people in God’s Church, rather with those in Satan’s world with whom we come into contact, whether it be at work or at school. The Worldwide Church of God under Mr. Armstrong kept various contacts in the world, as does the Philadelphia Church of God today.

The Bible commands us: “If it be possible … live peaceably with all men” (Romans 12:18). Churchill’s relationship with Stalin is an example of this principle in action. It shows how putting our best foot forward can make all the difference when working with an antagonistic individual; it shows how to give and appease them in order to get the job done while at the same time not compromising our principles; and it shows how, by keeping the ulterior motives of our associates in the back of our minds, we can avoid bigger problems down the road by not trusting them with everything we have. As long as this is Satan’s world, we will unavoidably have to work with people who do not have our best interests at heart. Churchill and Stalin’s relationship show how this can be done.