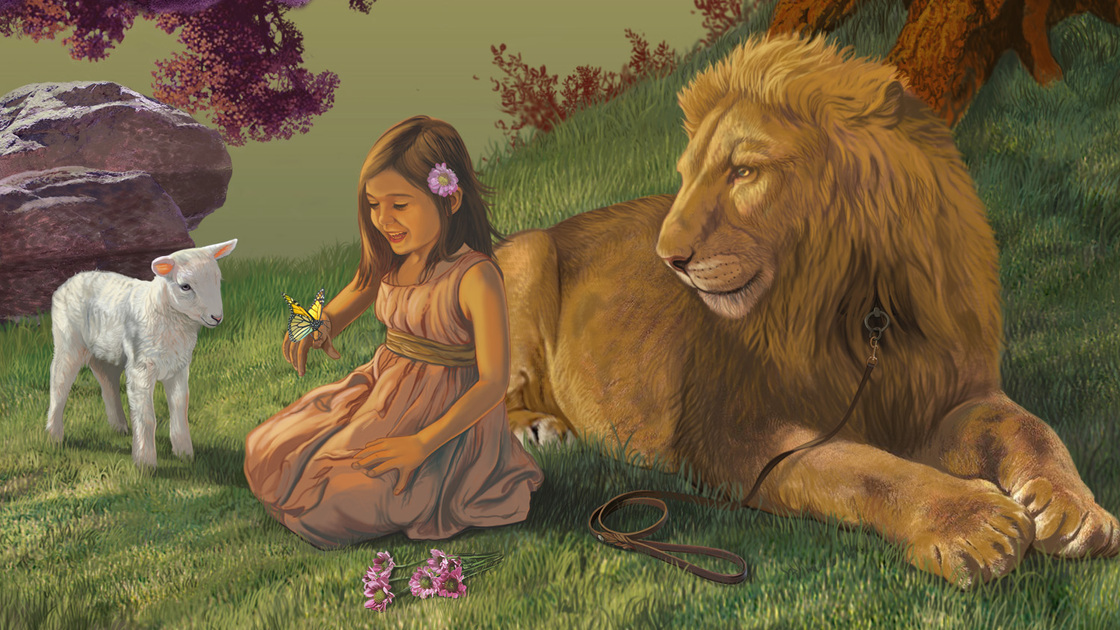 Your world is about to change dramatically! We call it the “World Tomorrow” because it’s the world just ahead—following the soon-coming return of Jesus Christ to restore the government of God to our globe. Many scriptures detail what this time will be like, and some specifically dwell on the physical transformation of the landscape: deserts blossoming with abundant foliage, wasted cities being rebuilt, and uninhabited areas being populated.

There’s a description within two of these passages that give even more vivid detail as to the environment of tomorrow’s world.

In Ezekiel 36:33-34, God says: “… I will also cause you to dwell in the cities, and the wastes shall be builded. And the desolate land shall be tilled, whereas it lay desolate in the sight of all that passed by.” The next verse quotes what people will say about this area: “And they shall say, This land that was desolate is become like the garden of Eden; and the waste and desolate and ruined cities are become fenced, and are inhabited.”

The other passage is found in Isaiah 51:3, which reads: “For the Lord shall comfort Zion: he will comfort all her waste places; and he will make her wilderness like Eden, and her desert like the garden of the Lord; joy and gladness shall be found therein, thanksgiving, and the voice of melody.”

Both passages use the same simile about the World Tomorrow: It will be like the Garden of Eden. Have you ever been to the Garden of Eden? Of course not. So we have to connect Bible verses together to help paint this picture in our minds. The more we understand about Eden of yesteryear, the more we can understand the physical characteristics of the World Tomorrow. We will explore four aspects.

1. A Place of Plentiful Food

As you might expect, we get some detailed descriptions of Eden in the first chapters of the Bible, though other details are scattered throughout God’s Word.

Even those verses give us clues as to what Eden was like. But God also tells us specifics related to food availability in the garden itself.

How is this similarly reflected in a key prophecy about the World Tomorrow? Micah 4:4.

It is no wonder that God makes us feast during the holy-day season where we celebrate this coming time of abundance. This is why, when we come to the Feast of Tabernacles, God commands us to partake of finer dining experiences than we’re accustomed to, and to have things we desire—not just to scrape by on the bare necessities of nutrition, but to be filled.

How is that component of the Feast of Tabernacles a direct type of the coming utopia? Isaiah 25:6.

2. A Place of Abundant Water

As brief as the first few chapters of Genesis are, there’s a remarkable amount of additional detail about Eden—particularly as related to the river that came from it.

How many branches of Eden’s main river were there? Genesis 2:10.

Note here how Eden was a larger area, and its river watered the “garden”—a specific region within Eden.

How did the offshoots of this river impact the natural resources in the surrounding area? Verses 11-14.

How well watered was this garden? Genesis 13:10.

This is a detail we pick up about Eden from when Lot wanted to settle in the plain of Jordan near Sodom and Gomorrah.

When it comes to tomorrow’s world, we know that the deserts will become well watered as well (Isaiah 35:6-7; 43:19-20). Those are truly inspiring prophecies, but what is the main source of water for the region surrounding Jerusalem? Joel 3:18; Ezekiel 47:1-6.

3. A Place of Many Trees

Those verses in Ezekiel 47 discuss a river springing out of this new temple in Jerusalem (see also Zechariah 14:8)—what we commonly call the Ezekiel temple, because of the significant details given in the last eight chapters of Ezekiel.

These “living waters” will produce some tangible results in terms of vegetation. What did Ezekiel specifically notice in his vision? Ezekiel 47:7-9.

Ezekiel 31 contains a passage about a worldly leader—comparing him to a cedar of Lebanon taller than Eden’s trees. One of those verses gives us hints about specific kinds of trees in Eden. What kinds were there? Ezekiel 31:3-10.

How dense and numerous were the trees in Eden? Genesis 3:8.

To think of Adam and Even hiding themselves implies a certain thickness of foliage in Eden. They were hiding because they had taken of the forbidden fruit. Remember all the trees were “good for food” (Genesis 2:9), but God forbad them from eating the fruit of one tree (verses 16-17).

How will that curse be reversed in the World Tomorrow? Isaiah 55:12-13.

4. A Place to Commune With God

“When God designed the Garden of Eden, He gave it the same basic design as His residence in the Third Heaven” (Royal Vision, November-December 2014).

Was Adam created in the Garden of Eden, or created outside it and brought into it? Genesis 2:15.

When God thrust Adam out of the garden, where was he sent? Genesis 3:23.

This proves Adam was formed from dirt outside the garden, then placed inside it. The garden was a place to commune with God, since Eden was a pattern of the temple in heaven (and the one to come on Earth). Eden represented God meeting with humans.

This article quotes Ernest Martin’s The Temples That Jerusalem Forgot: “It was in this area of Eden, just outside the eastern gate of the garden, where Cain and Abel built an altar to petition God, whom they considered to be still in the garden. This altar was built at the east entrance to the garden, and there they offered their sacrifices. This altar of Cain and Abel came to be analogous to the altar of burnt offering located just east of the holy place in the tabernacle and the later temples. The temple at Jerusalem was patterned after the tabernacle that Moses constructed in the wilderness, which in turn was designed after the geographical features of the Garden in Eden and the land of Eden itself …. Recall that when Solomon built the temple in Jerusalem, he carved flowers and palm trees in the outer and inner walls of the holy place in order that the holy place resemble a garden [1 Kings 6:31-35]. So the temples were built to represent a symbolic type of the Garden of Eden, where our first parents were placed after their creation.”

Therefore, when God’s government is ruling the Earth, it will be a paradise that resembles a “heaven on Earth” in the landscaping—which the scriptures we’ve already studied illustrate. But there will also be a temple that people will visit (Psalm 68:29).

What will the landscaping around this temple be like? Isaiah 60:13.

People will travel to this area to worship God—to interact with Him—just like in the “garden of the Lord.”

All Four Traits Typify the Spiritual

The Bible clearly shows how all these physical attributes of both yesterday’s and tomorrow’s Eden have even deeper spiritual parallels. The presence of plentiful food, water and trees in both Eden and the World Tomorrow have further-reaching spiritual implications.

When those spiritual components are in our lives, we become “like a watered garden” ourselves (Isaiah 58:11; see also Jeremiah 31:12).

What spiritual parallels can be drawn from trees and their fruits as related to the World Tomorrow? Isaiah 27:6; 61:3, 11.

The passage in Isaiah 61 gives the image of God as the gardener and human beings like spiritual trees that He is planting and cultivating.

Psalm 92 is believed to be a psalm God gave to Adam in Eden. It is no coincidence then that this psalm has several references to trees. What specific trees are used in this metaphor? Psalm 92:12-14.

Even that fourth component we discussed—that Eden was like God’s throne room and also a type of the Ezekiel temple in the Millennium—was a type of something more majestic coming to Earth. Because, as Revelation 21 and 22 discuss, the place of God’s heavenly throne is actually coming to Earth.

When we discuss the “World Tomorrow,” we generally are referring to the 1,000-year rule of God’s government on Earth (Revelation 20:6): But this also extends to the period following that: the 100-year period of the Great White Throne Judgment (verses 11-12; Isaiah 65:20). The period discussed in Revelation 21 and 22 go beyond that time—when God the Father Himself descends to plant the holy city of new Jerusalem here.

Is there a temple in new Jerusalem? Revelation 21:22.

What flows from God’s throne in the holy city? Revelation 22:1.

What else is does the holy city have in common with Eden? Verses 2, 14.

The Bible begins and ends with discussion about the tree of life, and with a garden of exceptional beauty where God dwells.

Here we find the tree of life, a pure river and water source, plus health-giving food emanating from that tree. And it’s all proceeding right from the very throne of God Himself!

In Ezekiel—The End-Time Prophet, Gerald Flurry writes: “God is always trying to get angels and men to create ‘Eden, the garden of God.’ That is what we are here to create, and what we will be creating in the World Tomorrow. Satan tried to destroy that garden of God, but wasn’t able to. He was able to conquer Adam and Eve, because they hadn’t kept the Garden of Eden as the garden of God. … Mr. Armstrong was given several ‘gardens of Eden,’ and he turned them into gardens of God. He transformed the three campuses of Ambassador College into examples of godly beauty—physically and spiritually. Today, God has given us some land to create a garden of God. He wants to see us create that garden and conquer Satan in the process …. What vision there is in the Garden of Eden! God wants to make the whole Earth and universe blossom like a rose. But that won’t happen until angels and men fulfill their God-given potential.”