Highway of the Future
The road once narrow now made broad
By Ryan Malone • Sep. 27, 2022 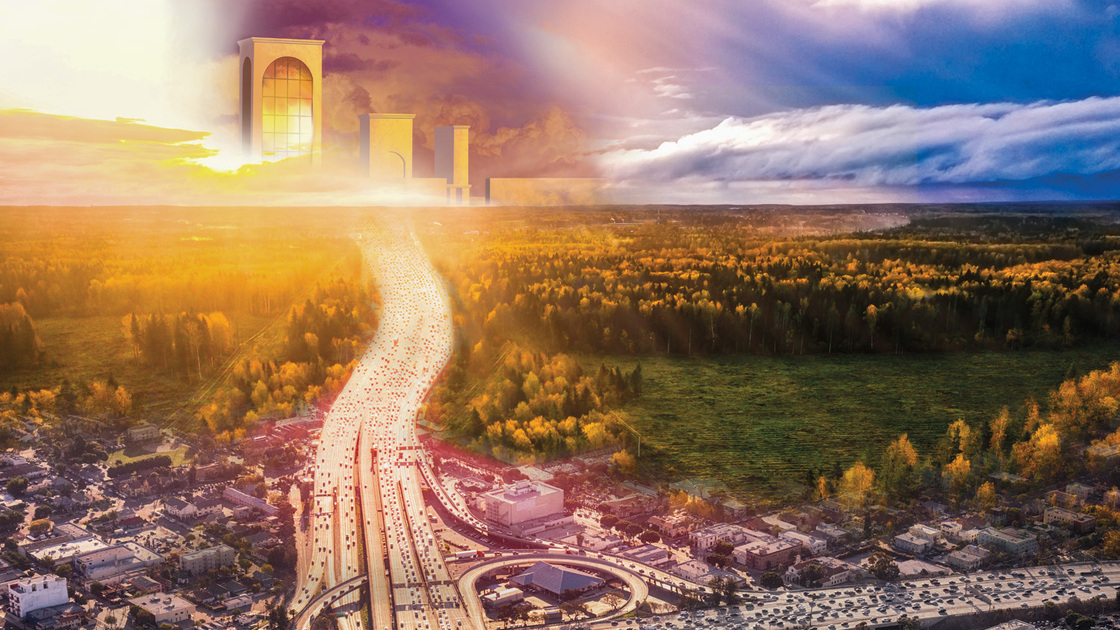 If you lived over 100 years ago, could you have imagined anything like the highway systems we have today? What’s astounding is that there is a highway coming (it’s still “down the road,” you could say) that was forecast thousands of years ago in the Holy Bible!

The highway we’re going to explore is a physical road that will exist after the Messiah returns and sets up His headquarters in Jerusalem. But it is also a metaphor—meaning it is symbolic of an even more astounding concept! Do you know what that might be?

First, let’s notice the aspects of this physical road. To do this, we need to review prophecies about the beginning of this new world. This is a world having recently been ravaged by world war, its survivors returning from bitter captivity. God promises to bring these captives to a place where they can “dwell safely” (Jeremiah 32:37).

Several prophecies, like Isaiah 11:11-16, describe this journey. This passage describes it much like the original Exodus—with waters being parted so man can traverse rivers! Verse 16 reads: “And there shall be an highway for the remnant of his people, which shall be left, from Assyria; like as it was to Israel in the day that he came up out of the land of Egypt.” This astounding prophecy is also found in Isaiah 27:12-13 and Zechariah 10:9-12. Isaiah 35:10 discusses them coming “to Zion with songs and everlasting joy upon their heads.”

From this point forward, God will settle these now-freed slaves in a “Promised Land” of their very own. And some of these nations will easily be able to access other nations. In Isaiah 19, we read about Egypt instituting worship of the true God (verses 18-22). There will also be a highway connecting Egypt and Assyria (see verses 23-25).

So God will create temporary paths to help these captives return. Plus there will be more permanent highways between major nations. But the most significant highway will lead to Jerusalem.

Several prophecies show the need for such a highway, because Jerusalem is the main tourist destination for this new society. One of those prophecies reads: “And they shall bring all your brethren for an offering unto the Lord out of all nations upon horses, and in chariots, and in litters, and upon mules, and upon swift beasts, to my holy mountain Jerusalem, saith the Lord, as the children of Israel bring an offering in a clean vessel into the house of the Lord” (Isaiah 66:20).

This verse discusses methods of transportation to get to Jerusalem. “Litters” can refer to covered wagons. That, plus “swift beasts,” implies there could be high-speed transportation—for the purpose of getting people to headquarters. After all, people will be coming “out of all nations.”

Zechariah 8:20-23 show the widespread desire to visit Jerusalem and people wanting to go there speedily. Because this city will be “sought out” (Isaiah 62:12)—that is, because of the massive number of visitors to this city—God promises to make it easily accessible.

In Isaiah 35, in fact, He says there will be a main road into the city—a “highway,” or a wide road: “And an highway shall be there, and a way, and it shall be called The way of holiness; the unclean shall not pass over it; but it shall be for those: the wayfaring men, though fools, shall not err therein” (verse 8). The Hebrew word for “highway” has a similar meaning to our word today.

“No lion shall be there, nor any ravenous beast shall go up thereon, it shall not be found there; but the redeemed shall walk there” (verse 9). We often talk about the nature of dangerous animals being changed in this coming world (see also Ezekiel 34:25). That will even encourage people to make journeys. Some can use a dangerous animal as a reason not to leave the house (Proverbs 26:13), but nothing threatening will keep travelers off this road!

Isaiah 49:8-10 contain more details about the ease with which people can get to Jerusalem. The way will be clearly marked. Verse 10 shows that, as people approach Jerusalem, there will come a point where they can just follow the waterway. Why? Because the temple in Jerusalem is the water source, and waters are flowing out from that sacred place.

Notice the inspiring verses that follow: “And I will make all my mountains a way, and my highways shall be exalted. Behold, these shall come from far: and, lo, these from the north and from the west; and these from the land of Sinim” (verses 11-12). Other translations of this passage indicate the highways will be on higher ground than the valleys (literally high ways). People will be able to find these paths no matter from how far they come. “Sinim” in verse 12 is referring to Australia: That’s far from Jerusalem, but God will make sure they can get there too!

Verse 22 refers to the setting up of a “standard.” That indicates banners or signs showing how to get to this major thoroughfare.

God knows our human minds are limited to what our physical senses take in, so when He teaches spiritual “realities” (which are actually more real than the physical), He gives us physical counterparts to help us understand those invisible things. The world of tomorrow will be a multitude of metaphors for what is happening to the world spiritually.

All the visible, tangible, physical changes—the high mountain upon which the temple perches, the abundance of pure water, the growth of vegetation, to name a few—all represent great spiritual advancements coming to our world. This massive roadway into Jerusalem is no different. What does it represent? The Bible is clear.

The name of the highway, as we read in Isaiah 35, reveals it is the “way of holiness”!

“The many—not the few—will go up to Jerusalem by the actual road named ‘The Way of Holiness,’ which Christ will have built as a physical reminder of God’s way. They will say, ‘He will teach us of His ways’ (Micah 4:2). They will also, in prayer, seek God by His spiritual ‘Way of Holiness’” (Ambassador College Bible Correspondence Course, Lesson 6, 1958 version).

In Isaiah 35, just before discussing this famous soon-coming highway, God says He will heal the blind, deaf and lame—which would also apply to those who are spiritually unable to see, hear or walk this road.

That aptly describes humanity as a whole, which has been cut off from God’s “way” until this point. Consider how the Bible talks about true religion as a “way” of life. Peter called it the “way of truth” (2 Peter 2:2). Malachi wrote about how some of God’s end-time people “departed out of the way” (Malachi 2:8). Sometimes, God refers to it as a symbolic “path” (Jeremiah 6:16).

But we also know that the world as we know it has been cut off from “the way of the tree of life” (Genesis 3:24).

The way was blocked!

Jesus said as much: “Enter ye in at the strait [narrow] gate: for wide is the gate, and broad is the way, that leadeth to destruction, and many there be which go in thereat: Because strait is the gate, and narrow is the way, which leadeth unto life, and few there be that find it” (Matthew 7:13-14).

Otherwise, as Jesus Christ stated, man cannot walk this path. Luke’s account says some even “seek to enter in, and shall not be able” (Luke 13:24). In that verse, He tells us: “Strive to enter in at the strait gate.” You’ve been given access, but you still must struggle and battle for entry!

What is so beautiful about these World Tomorrow prophecies is that the Bible is not just describing a physical highway, but also a time when the way to God is opened. As we read in Micah 4:2, people will look for it, and they will find it! A parallel prophecy in Isaiah 2 indicates the road will be well lit (verse 5)—which we can take literally and symbolically. Proverbs like “the path of the just is as the shining light” (Proverbs 4:18) will certainly resonate in minds recently opened to God’s truth!

Another passage that will ring with more clarity is Psalm 84:5. The King James Version reads: “Blessed is the man whose strength is in thee; in whose heart are the ways [same Hebrew word rendered highways] of them.” This is referring to the location of God’s temple, and people “in whose heart are the highways to Zion” (Revised Standard Version).

People will not just physically go there; their minds will constantly “visit” headquarters. It’s like a highway from their hearts directly to Jerusalem.

A song produced by the Philadelphia Church of God, titled “Invitation,” has these profound lyrics by Amy Hallett:

Come and sit beside the highway near the water.

This was once the narrow path that few men trod.

Now it paves the way for every son and daughter;

It’s the highway to the city of our God.

Remember those verses we read about God making the road visible, well-marked and free of obstacles? That all represents access to God’s truth!

It’s not “strait and narrow” anymore! That’s not to say God’s way of building character will be easy. But it is biblical to say it will be easier (which is why those called out of Satan’s world have a higher reward than those called after he is put away). Building character will still have its challenges, but it generally will not include the challenge of going against society as influenced by Satan’s prevailing broadcast. There will be more of a “community spirit” in going the right way.

Hebrews 9:7-8 talk about “the way into the holiest of all” not yet being “made manifest,” or visible. But soon it will be.

Jeremiah 32:38-39 read: “And they shall be my people, and I will be their God: And I will give them one heart, and one way, that they may fear me for ever, for the good of them, and of their children after them.”

One way is coming. There is only one way to God, and He is about to make that path apparent to all mankind, and you can be there to help.

People will be shown the way. Physically, it will be much easier. Spiritually, it will be a bit easier than it is today—though it will still require the guidance of many teachers. That’s you.

God has given you access to this way today, and you know the way to God. That means you can help guide people in the way in the wonderful World Tomorrow.

The lyrics to the song “Invitation” conclude this way—describing the invitation that our King of Kings proclaims to the world:

Come and join the people walking

The road once narrow now made broad.

Come and join them on the highway

to the city of our God.”