‘Let There Be Bioluminescent Sea Life’
Reading between the lines in Genesis 1:20
By Rebekah Goddard • Sep. 1, 2022 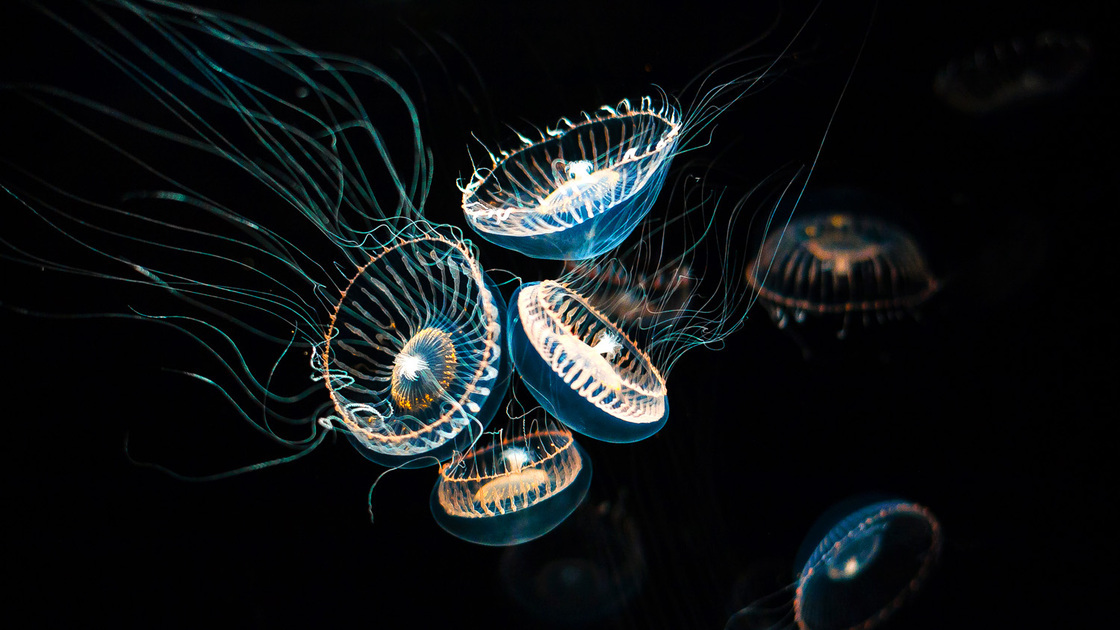 Around the depth of 600 feet, the ocean enters what marine biologists call “the Twilight Zone”—named not only because it is situated between the Sunlight Zone and the Midnight Zone, but because it is at this depth that things get weird.

Very little sunlight penetrates this stratum of water, creating a cold, dark environment, which is ironically where the majority of marine life is found. Up to 90 percent of all sea creatures live below 2,000 feet—mid-Twilight Zone (which transitions to the Midnight Zone at around 3,300 feet). In this realm, devoid of light, most creatures generate their own through bioluminescence—living light.

The most notorious bioluminescent fish is probably the anglerfish—who could forget that scene in Finding Nemo? —with its bulbous body and fishing-rod-like appendage on its head that dangles a light to lure its prey. This fish is marked in the minds of many as one of the most horrifying creatures you are glad to have never encountered. But the anglerfish is far from the only creature to make its own light, nor the most unusual looking.

Around 75 percent of all sea creatures exhibit bioluminescence. On land, there are several insects—fireflies, certain beetles—and varieties of fungi that produce their own light, but nowhere is it more common than beneath the waves. This ability is used to defend, distract, hunt, attract, communicate or even camouflage—by predators and prey alike.

Many species of jellyfish generate their own light as a defense or a distraction against predators.

The colobonema is a tiny midwater jellyfish, most of its length of five centimeters consisting of a trail of glowing tentacles, but what it lacks in size, it makes up for in speed. When faced with a potential predator, the colobonema will detach tentacles as it flees, distracting the predator with the luminous strands that drift in its wake.

The helmet jellyfish, a bright red, torpedo-shaped jelly with stiff tentacles, seems to sparkle with blue particles in the darkness. When threatened, it will literally eject its bioluminescence into the water to trick the predator into following the glowing trail while the helmet jellyfish jets off, now unilluminated.

The beroe comb jelly has iridescent plates along its body that reflect light in waves of colors—not the result of bioluminescence. But in complete darkness, the jellyfish can shimmer with a weblike network of blue light across or inside its transparent body, likely to startle any predator that approaches it.

Another jellyfish to generate its own light is the atolla, a species of crown jellies, deep red in color with a bell that looks like a glass dome. When threatened, the jelly can create a pinwheel of blue light within the dome—not to startle or distract predators, but actually to attract larger predators. When the atolla is in danger, its light acts as an alarm, signaling larger predators, which come and scare off the current predator-turned-prey that had been threatening the jellyfish.

Some creatures, like the helmet jellyfish, release bioluminescent substances to distract their predators. The green bomber worm, aptly named because of the specialized sacs of bioluminescence that it bursts when in danger, distracts would-be predators with an explosion of green. Its relative, the gossamer worm, has the same mechanism but produces yellow bioluminescence.

Blue and green are the most common colors of bioluminescence in the ocean because those frequencies of light travel farthest in water—the same reason the ocean appears blue. Blue light is also one of the few colors that fish see: Most fish cannot see color, but they do have special light-sensing cells in their eyes that enable them to differentiate blue light. There are exceptions to these common colors, as seen with the gossamer worm. This restriction to blue light also provides unique benefits to having red bioluminescence, which the majority of sea creatures cannot see at all. Only one species is able to capitalize on this: the dragonfish.

Dragonfish are the fish that can see red light. God designed this creature, only a few inches long, with red photophores (light-emitting organs) beneath its eyes to illuminate the water ahead of it as it hunts, like headlights that only it is capable of seeing.

Certain species of siphonophores are capable of emitting red light, although most stick with blue. These long chains of gelatinous organisms act as a colony, moving, feeding and surviving as one. Siphonophores use their luminosity to attract prey, which get caught in their threadlike tentacles. When threatened, they will often detach body parts that continue glowing to distract the predator.

Even in the darkness of the deep ocean, some sea creatures are able to use their bioluminescence to blend into their environment rather than stand out. This application is called counterillumination. Midwater fish like the viperfish or lantern fish have photophores along their undersides that can erase their silhouette against the lighted water, hiding them from predators lurking below. They can even adjust the intensity of their bioluminescence to best blend in with the water.

There is one species of fish on which this ruse is useless. The barreleye fish is named for its large, tubular eyes encased within a transparent head; its eyes are constantly rotated upward, scanning the “skies” for prey. But where bioluminescence serves as camouflage for other creatures, it acts as a flag for the barreleye, whose eyes contain a pigment that filters out sunlight, allowing it to locate prey by their bioluminescence. Shallow(er) water barreleyes actually use counterillumination themselves, but the ability to see past the light seems distinctive to them.

Last but not least in this lineup of bioluminescent sea life are copepods. These tiny crustaceans are the most copious (pun intended) of bioluminescent creatures. They may not look like much compared to some of the other fish we’ve covered, but in order to understand their significance, we must understand how bioluminescence works. It results from the chemical reaction between a compound called a luciferin and an enzyme catalyst called a luciferase. The most common luciferin is a molecule called coelenterazine; most sea creatures are not able to produce this molecule internally. How then do they get this compound required for bioluminescence? Enter the copepod.

All these creatures and more inhabit a realm that man barely knows anything about. By some estimates, 90 percent of the living creatures on the planet are underwater and yet to be discovered. It is unlikely you have seen any of these creatures in real life (that weren’t in an aquarium). They exist so far outside of our spheres of awareness, it is easy to forget the multitude of creatures lurking beneath the waves—creatures that come with more fantastic and distinctive properties than just glowing.

Genesis 1 recounts how God re-created the Earth in one week. But the brief descriptions of each day within the condensed account make it is easy to underestimate just how vast that creation really was. We tend to limit it to what’s observable with our eyes, yet what we can see comprises less than 1 percent of the Earth itself—with over 70 percent of that being hidden beneath water.

In verses 20-21, Moses records God’s creation of marine life, which would have included barreleyes, siphonophores, beroe comb jellies and hundreds more species that we aren’t even aware of.

There is so much of God’s creation that man is oblivious to. Even in the glowing field of bioluminescence, scientists are usually guessing about why the animals behave the way they do. But we can still learn as much as we can about what man does know so we are ready when God opens a universe of understanding to us. Meditate on the many realms of God’s creation and how deep they really go—far past what we can observe.

(And fun fact: The bioluminescent creature shown in Finding Nemo is actually a subspecies of anglerfish known as the black seadevil, which is just as lovely as it sounds!)