The Most Unimpressive Fish in the Sea
An ordinary creature’s extraordinary impact
By Jordan Saranga • Aug. 18, 2022 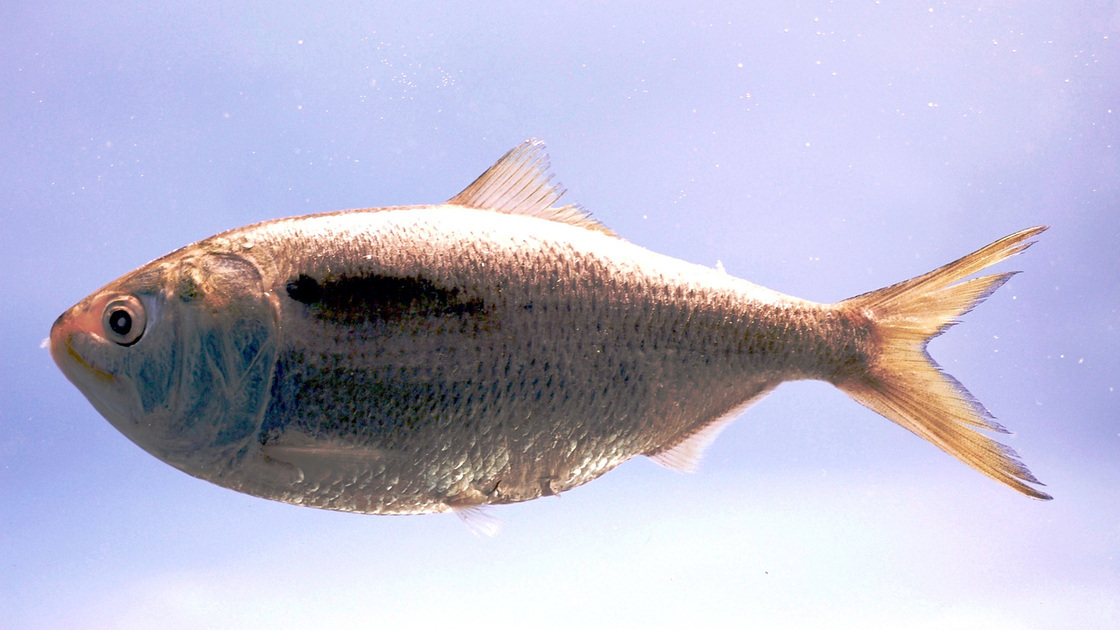 It’s not glamorous; it’s not extraordinary. It’s not intelligent, prominent or grand. It’s the menhaden. Don’t recognize it? What about the bunker? Maybe mossbunker, pogy or fatback? Those are just a few names for what looks like the most unimpressive fish in the ocean. It resembles its plain, silver cousin, the sardine, except for the distinctive black spot behind its gills. For every one that is caught, there are a few hundred thousand more waiting to be spawned.

This fish does not appear to be special in any way. Or is there more to it than meets the eye? If we dive a little deeper, God’s incredible use for this fish—and for all seemingly unimportant creatures—makes itself evident.

Most menhaden live along the eastern coasts of North and South America, the bulk of the population sitting between the Canadian coast and the state of Florida. They forage together in schools of millions, with each full-grown fish measuring just over a foot long.

Over the centuries, man has found many uses for menhaden. When settlers first arrived on the American continent, they were taught by natives to use the fish as fertilizer. By the mid-1800s, industrial development had created a high demand for whale oil. When it was discovered that oil could also be extracted from menhaden, they became the preference. It was far more profitable to go menhaden fishing for a matter of days than to go whale hunting for weeks at a time with no guarantee you’d be successful.

Menhaden could be ground up into feed for livestock and pets, or used as bait for catching larger fish; the oil was used for paint products and eventually refined into a dietary supplement. Today, the menhaden is still caught by the millions to serve our needs. But rather than just an ingredient, it is a member of an elaborate ecosystem. The fact is, the Atlantic Ocean relies on the menhaden a lot more than we do.

Unless you prefer your fish and chips to be especially bony and oily, menhaden aren’t exactly edible to us. However, menhaden are in high demand with just about every marine predator on the Atlantic coast. Near the bottom of the food chain, they are a primary source of protein for larger fish, marine mammals and seabirds because they are one of the few species that can convert cellulose from the plankton they eat into fatty acids. Those fatty acids—called omega-3 acids—help maintain cell, blood and heart health in both animals and humans. As long as there are menhaden to eat, the bigger and better the fish we eat.

By feeding fish we more commonly eat, menhaden indirectly feed us. Sea bass, tuna and weakfish (imagine having such a degrading title) rely on a diet of mostly menhaden. Take away the abundant menhaden population—which has shrunk over the past several decades—and those predatory fish are left to scour for schools of smaller fish that don’t have the same nutritional value. Fisheries have discovered that more predators like the striped bass are suffering from malnourishment, and sickly fish are almost useless as a food source for us.

The menhaden’s purpose goes even beyond providing the Atlantic coast with food. They are also “filter feeders.” A sizable school of menhaden can filter millions of gallons of water per minute, allowing more sunlight to reach the ocean beds, without which aquatic plants cannot produce the energy needed to survive.

This natural filtering process also prevents toxic algal blooms—when algae or plankton quickly accumulate near the surface. Algal blooms are one of the biggest threats to coastal marine life—exhausting the water’s store of oxygen, preventing sunlight from reaching plants, and infecting fish and mammals with harmful bacteria. Trillions of sea creatures have the menhaden to thank for their clean living space.

After centuries of harvesting menhaden, fisheries have begun to realize that fish is, in fact, a limited resource. If not for the menhaden’s ability to reproduce so quickly, their existence would be significantly threatened. A female menhaden can produce up to 300,000 eggs in a single year—that has to be God’s way of saying that the environment needs a lot of menhaden. A decrease in menhaden over the past few decades has had a noticeable impact: algal blooms are growing consistently, predatory fish are starving, and American fisheries are facing the consequences of their greed. They are beginning to realize that they’ve taken this unimpressive little fish for granted.

By taking a closer look into the life of the menhaden, we learn that God has a very specific role for each member of His creation, however unimpressive it may appear. The 19th-century ichthyologist (studier of fish) George Brown Goode said of menhaden: “Their mission is unmistakably to be eaten.” What looks like the most unimpressive fish in the sea turns out to be one of the most important.

Never underestimate the impact of the lowliest of creatures. It can be easy to dismiss the ordinary at a glance, but those simple, unseen, “boring” members of creation often have the greatest contribution to make.