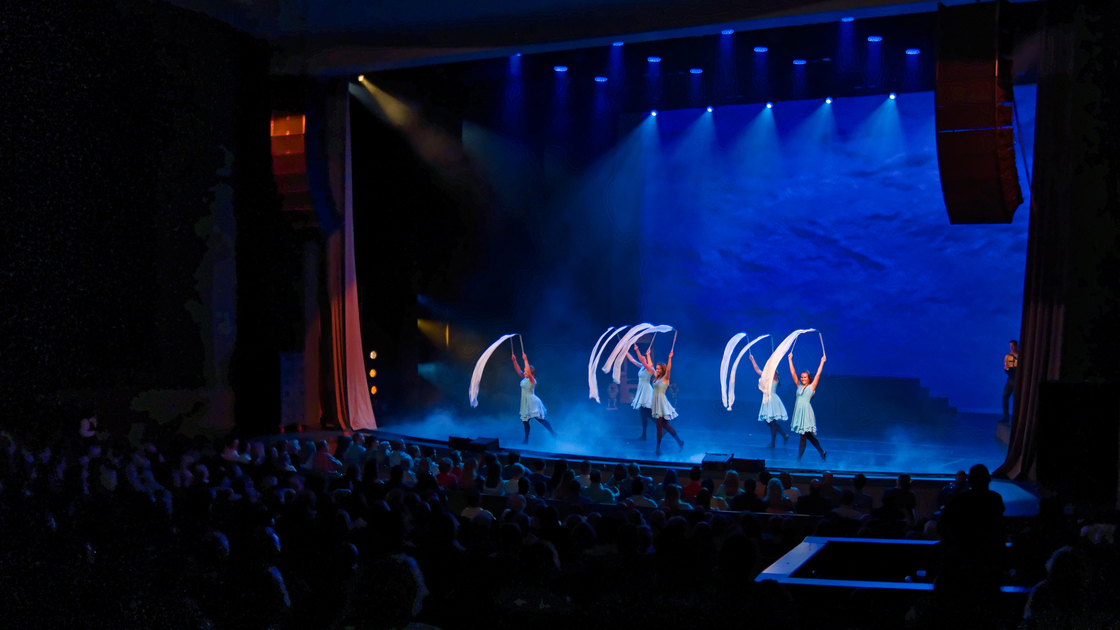 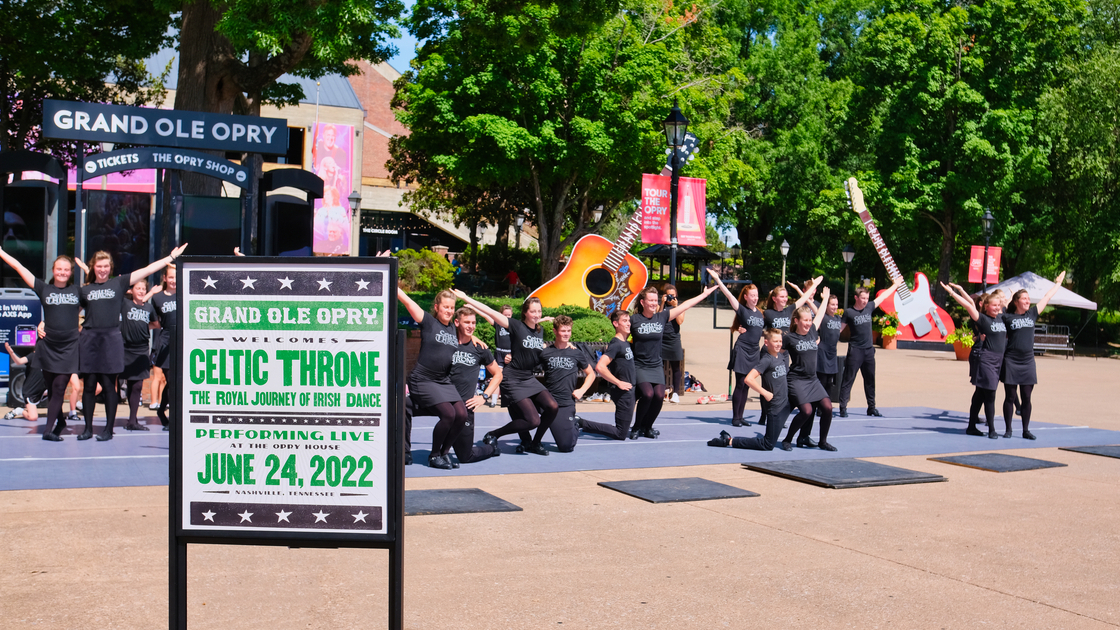 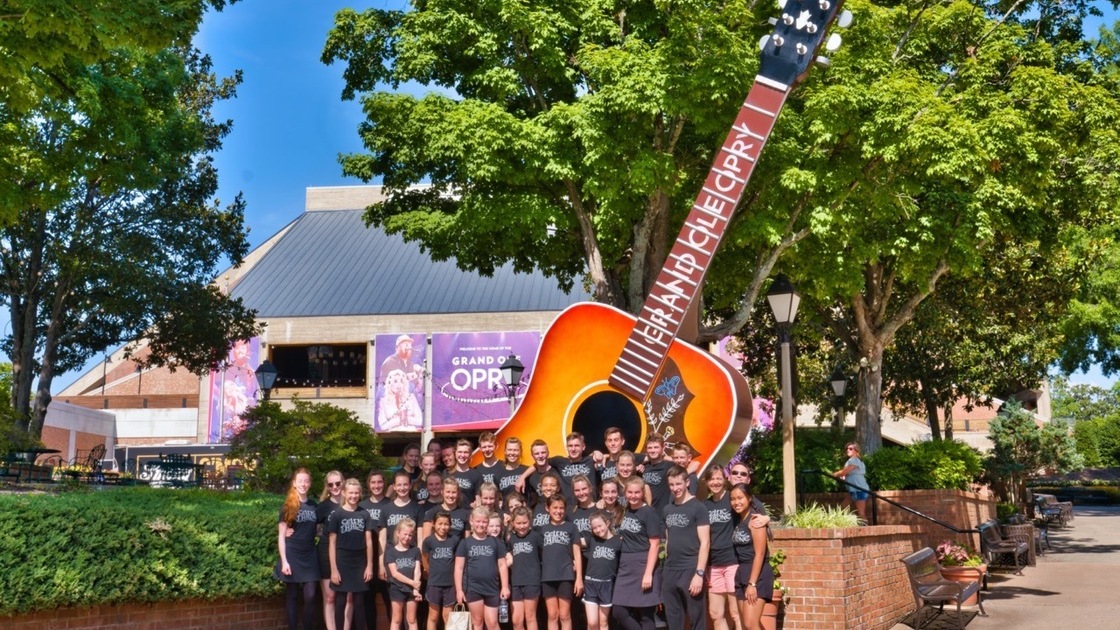 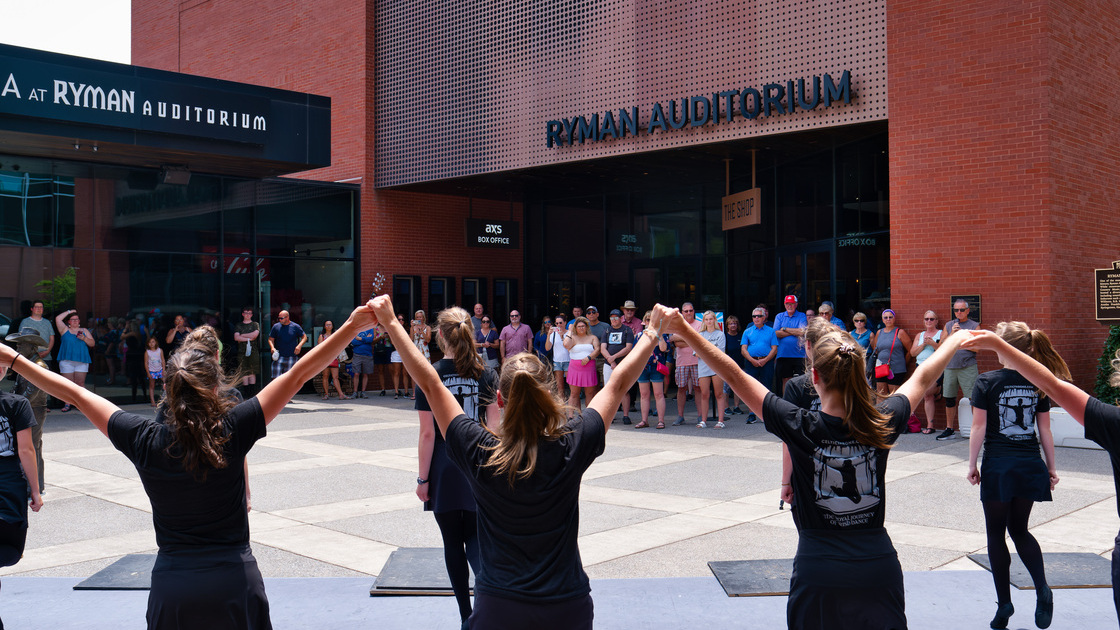 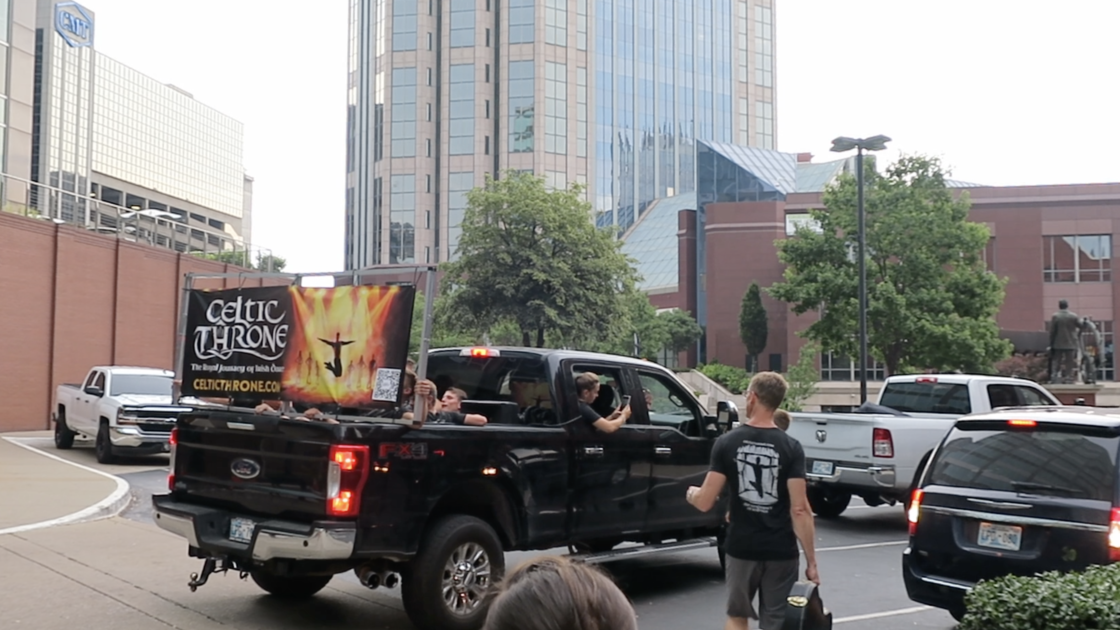 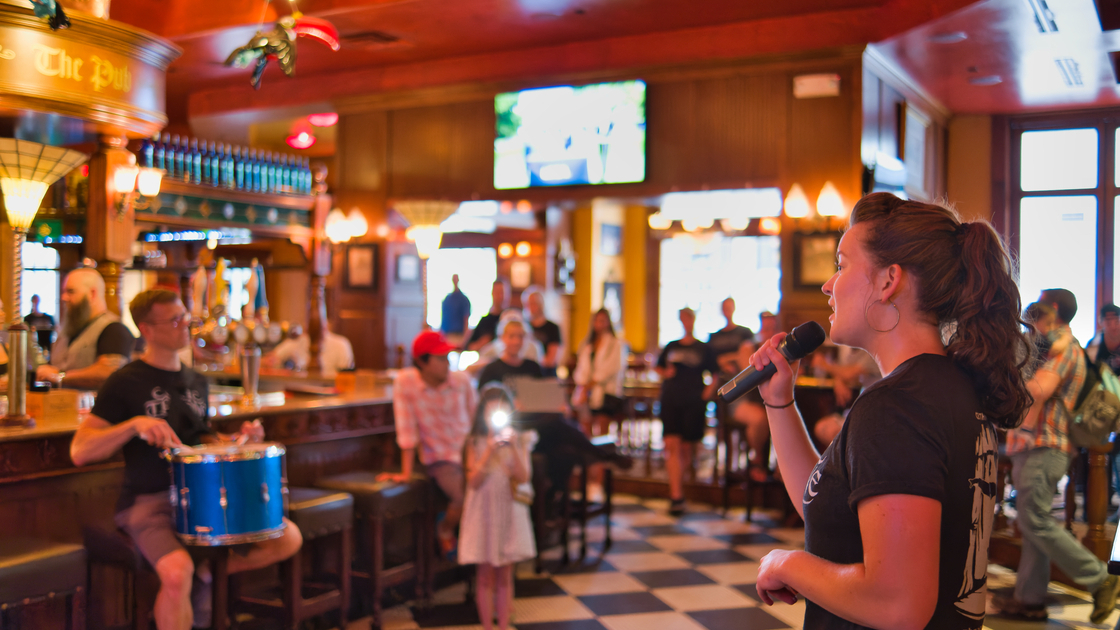 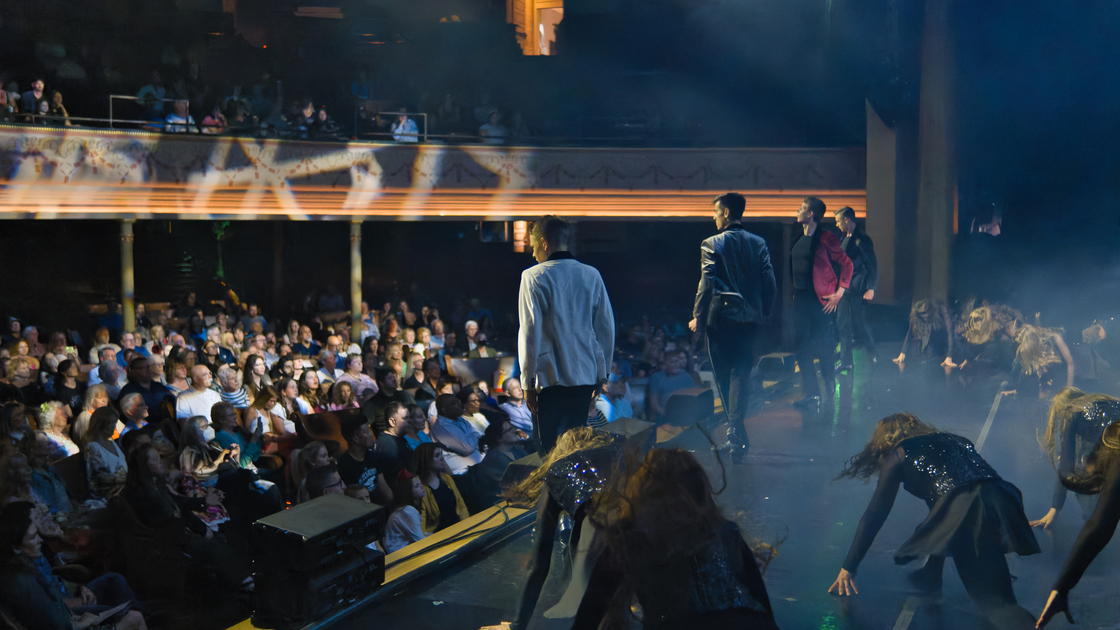 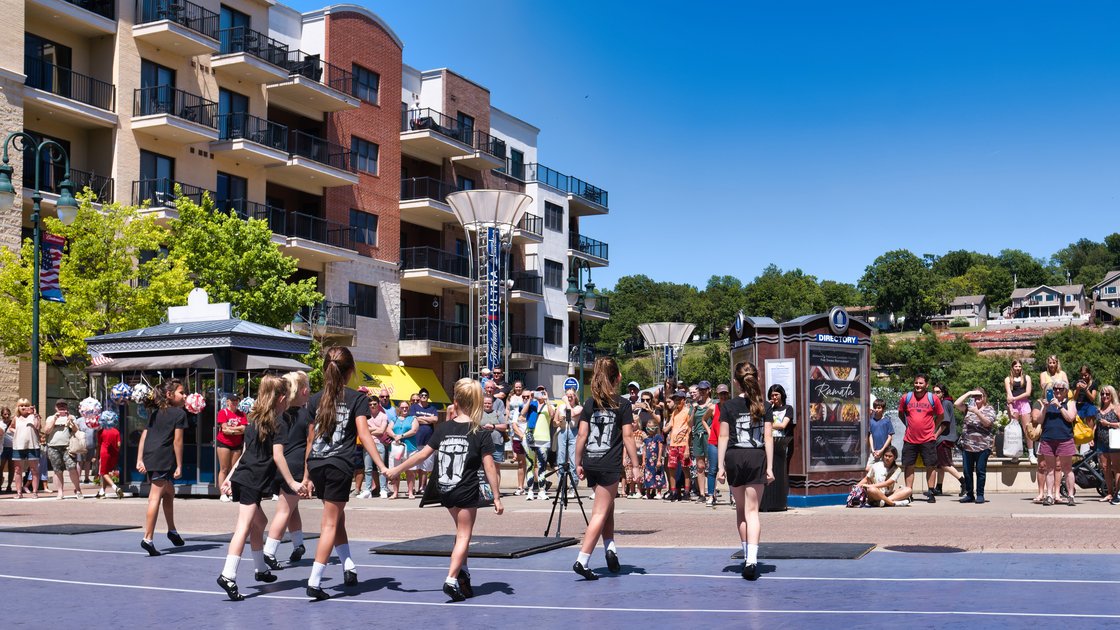 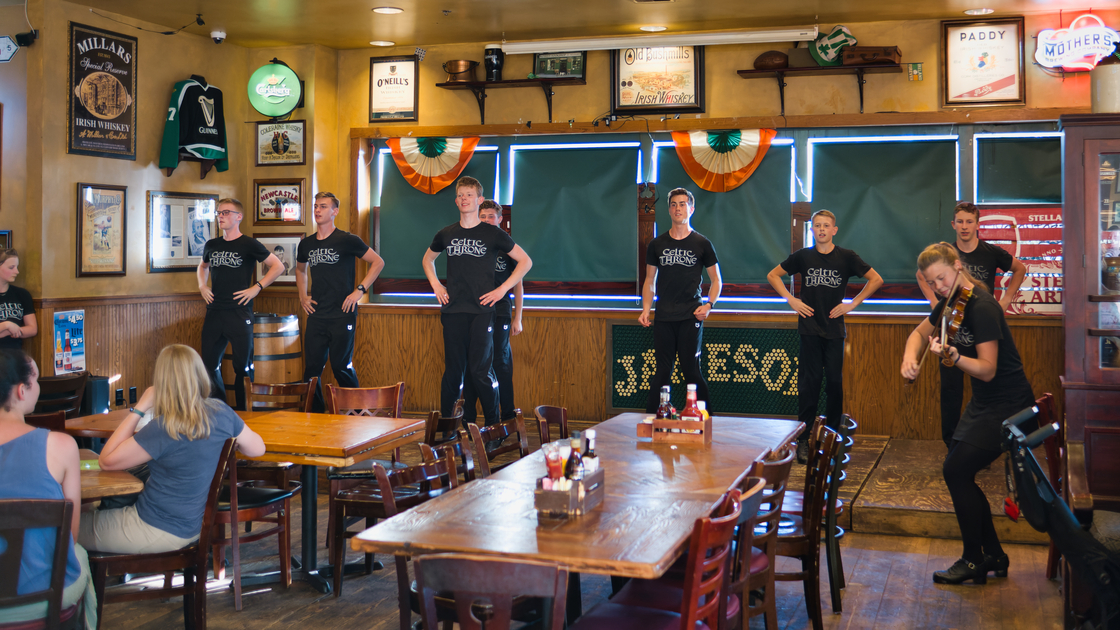 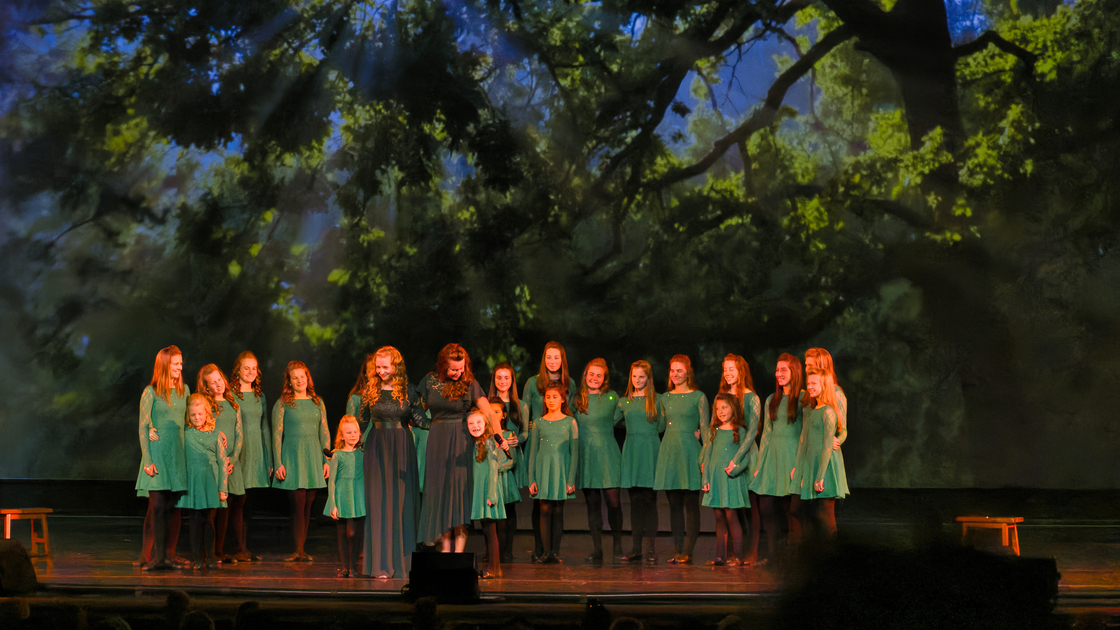 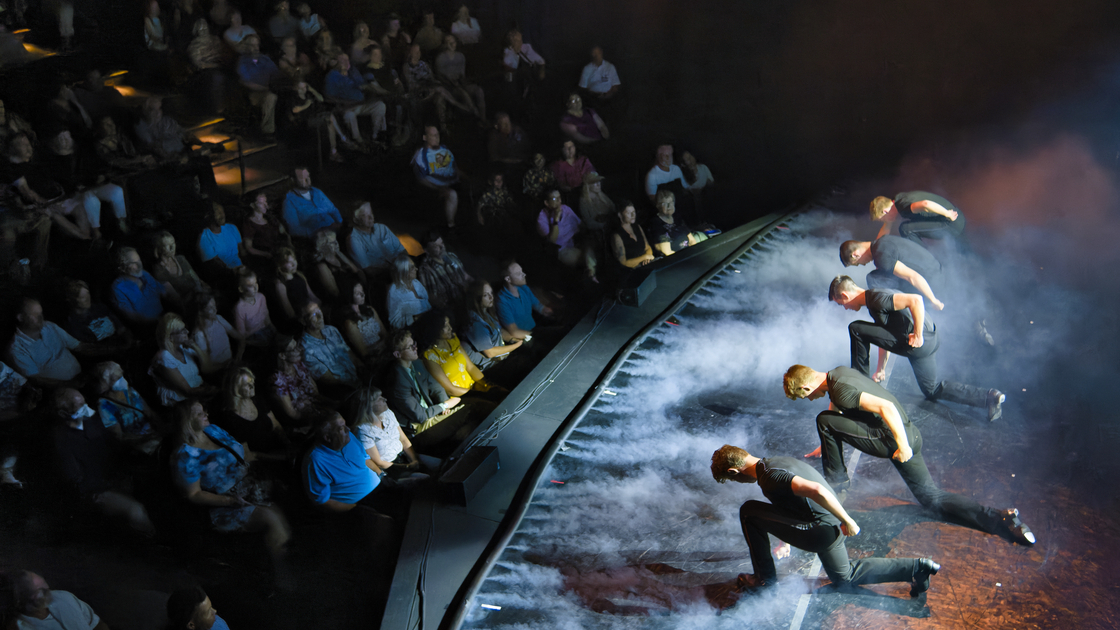 OKLAHOMA—At 8:00 a.m. on June 21, Celtic Throne dancers and crew assembled at the John Amos Field House on the Philadelphia Church of God headquarters campus to embark on the second half of the summer 2022 tour: the “Eastern leg”. After a show at Armstrong Auditorium on June 6 followed by shows in Denver, Amarillo and Rapid city, they were once again leaving their home base and most familiar theater to dance on stages that presented new challenges.

That evening, after settling into the hotel in Tennessee, the dancers met in the lobby for dinner and a viewing of the popular Irish Dance show, Riverdance. They then watched the final number of Celtic Throne, “Utopia”, to compare and to see where they could improve technique and showmanship.

On Thursday the troupe arrived at the Von Braun Center in Huntsville, Alabama to fine tune and adjust things to the stage. Chairs had been added to a space in front of the stage making the audience even closer to the stage than usual.

Dancer Leah Hyde said after the show that having the audience closer “makes the performance more interactive and helps you engage with the audience, and it makes me as a dancer more excited to perform.”

574 had purchased tickets for that evening’s performance. Co-director Brad Macdonald said he felt that the viewing of Riverdance the night before had motivated the dancers to put on their best performance of the tour. He said there was a noticeable increase in showmanship that elevated the entire show.

The group departed for Franklin, Tennessee, at 1 p.m. the following day for a short drive to Berry Farms Crossing where their hotel for the next five days was located. The area was filled with little shops and small businesses. Musician Joel Hilliker said that the setting reminded him of a college campus and almost felt millennial.

That evening they congregated in an outside patio area at the hotel for grilling and conversation.

At 1:45 on Friday they departed for the Grand Ole Opry in Nashville, Tennessee, arriving at 2:30 to set up the stage for a street show, or “promo”. As the crew rolled out the Marley on the pavement, a small crowd began to gather. At 3 p.m. the promo began. With sunny, nearly cloudless skies and temperatures reaching 93 degrees Fahrenheit, the dancers could feel the heat emanating from the surface they were dancing on, and the metal tips on lead dancer Jude Flurry’s shoes were too hot to touch. After a 20-minute program, they packed up quickly for the next group performing. Mr. Macdonald looked into doing a promo in front of a nearby mall, but he was unable to get permission. The crew loaded up in the vans and headed back to the hotel for a Friday night dinner.

They met for Sabbath services the next day at a hotel with the Philadelphia Church of God congregation from Scottsboro. For special music, dancer and singer Jordan Saranga, singer Jessica Brandon, and Vienna Flurry performed a song from the 2000 Philadelphia Singers, “Song of the Lamb.” Mr. Macdonald and Mr. Hilliker each gave a 45-minute sermon.

After services, the brethren and the crew fellowshipped for a few hours. The crew returned to the hotel, and although everyone was on their own for dinner, quite a few ate and conversed in the patio area at the hotel.

Meeting downstairs in the hotel for lunch on Sunday, Mr. Macdonald encouraged the crew to go into that day with the goal to always sell “one more ticket.” With this in mind, they departed for the Ryman Auditorium for a full afternoon of street shows.

They arrived at 12:45 pm and began setting up the stage outside the Ryman for the first promo, which drew a much larger crowd than the one at the Grand Ole Opry. Crew members handed out flyers. They discovered that unless one of the promos was going on, most people weren’t interested in the flyers. They needed to figure something else out.

Mr. Macdonald instructed a group of the dancers to take a wooden dance board to different spots around town and take turns performing hard shoe steps on it. As they danced on different street corners, strangers began offering them money. One man even placed a box next to the wooden board for passersby to throw money into. The dancers refused the money, but they did hand out a lot of flyers before heading back up to the Ryman for the second promo of the day.

The dancers got into a rhythm where in between promos they would go to different street corners handing out flyers and dancing on the wooden board, constantly keeping in mind Mr. Macdonald’s admonition to sell “one more ticket.”

While this was happening, one of the moms mentioned to Mr. Vejil that there was an Irish pub nearby. A few members of the crew headed that way. They found the pub, and got permission from the owner to do a smaller promo in the pub.

The crew packed up the stage at the Ryman. For further advertising, Mr. Macdonald put a Celtic Throne sign in the bed of the pickup truck and drove to the pub with Celtic Throne music playing.

Mr. Macdonald quickly put together a program that would work in the small space the restaurant provided. They did mostly hard shoe numbers on four wooden dance boards. As one of the dancers was leaving the pub, she was stopped by a group at a table who said that they were purchasing tickets right then on their phones. Many of the dancers said the day was exhausting but fun, and they were excited for the show in the Ryman the following evening.

They arrived at the Ryman theater at 1 p.m. the next day and began adjusting spots to fit the different stage dimensions. Of all the stages they had been to, the Ryman was the biggest adjustment, so it took all afternoon to prepare everything for the show that evening. Ryman Auditorium is also a museum open to the public, so people coming through caught snippets of the dancers practicing.

Even though they had to remember all of the adjustments, Vienna Flurry commented that it was “definitely better than our performance there last year.” It was time to return to where the tour had begun three years ago: Branson.

Tuesday was a full day of driving to get to Branson, Missouri. In the car ride they read, slept, sang and consumed snacks. On Wednesday they went to the Branson Landing for another afternoon of promos. After resolving a bit of trouble with the contract that gave them permission to dance at the Landing, the promo began. The interest at the Branson Landing seemed higher than it had been in Nashville, and the area facilitated large crowds to be able to watch. They performed promos all afternoon and performed in another Irish pub that evening, receiving discounted meals for doing the promo.

At the Mansion Theater the following day, Mr. Macdonald revealed something that would require some major adjustments: the stage had no curtain. In addition to reviewing spots on the stage, the dancers spent much of the afternoon practicing the changes that were made to account for not having a curtain. Mr. Macdonald ended up liking the change for the “Pioneers” entrance so much that they kept it that way for the remainder of the shows.

On Friday the crew headed home for a few days of rest before the last three performances.

On Wednesday, July 6, before the afternoon practice for the first Tulsa show, Mr. Macdonald gave the dancers a pep-talk about using the two Tulsa shows as preparation for the final one in Edmond. With the Tulsa Center for Performing Arts only seating 400, they hoped all the tickets would be sold. But that evening only 236 purchased tickets. Nevertheless, some of the dancers said it was one of their best shows of the tour.

They arrived on Thursday for practice later in the afternoon than normal, because they had already adjusted to that stage. The second night saw slightly higher sales–275 tickets–but it was still lower than they had hoped. Mr. Macdonald said he was pleased with their performance that evening and excited for the potential of the last show.

Edmond was a sellout show, meaning all of the available tickets were purchased. As the performers prepared for the show that morning, they said they were feeling the pressure, because it was also being livestreamed and filmed for the video production. The entire summer tour was culminating in this show, and they said they wanted to make it the best one.

Performers said they felt the high energy of the crowd as soon as the show began. They had performed the same steps in 10 previous shows this summer, but they said that the intensity and energy coming from the crowd gave them the same excitement they had felt at the first show of the tour. Each number was answered with thunderous applause. They said that the show flew by and they found themselves back in the auditorium lobby greeting patrons, friends, families and many teenage youth campers who had arrived early for the Church’s Summer Educational Program beginning the next day.