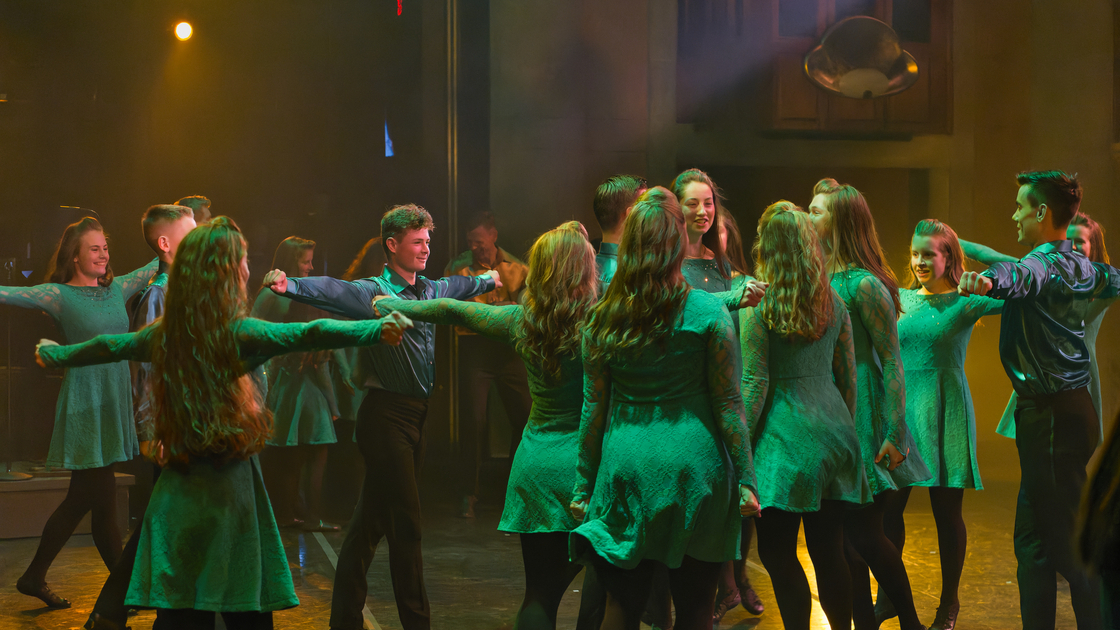 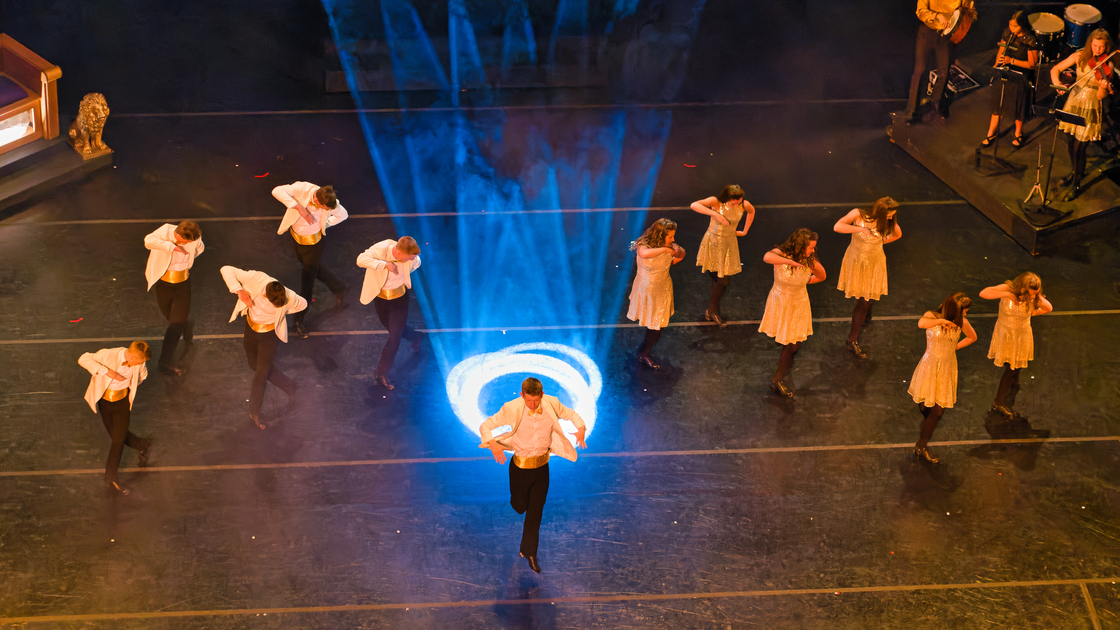 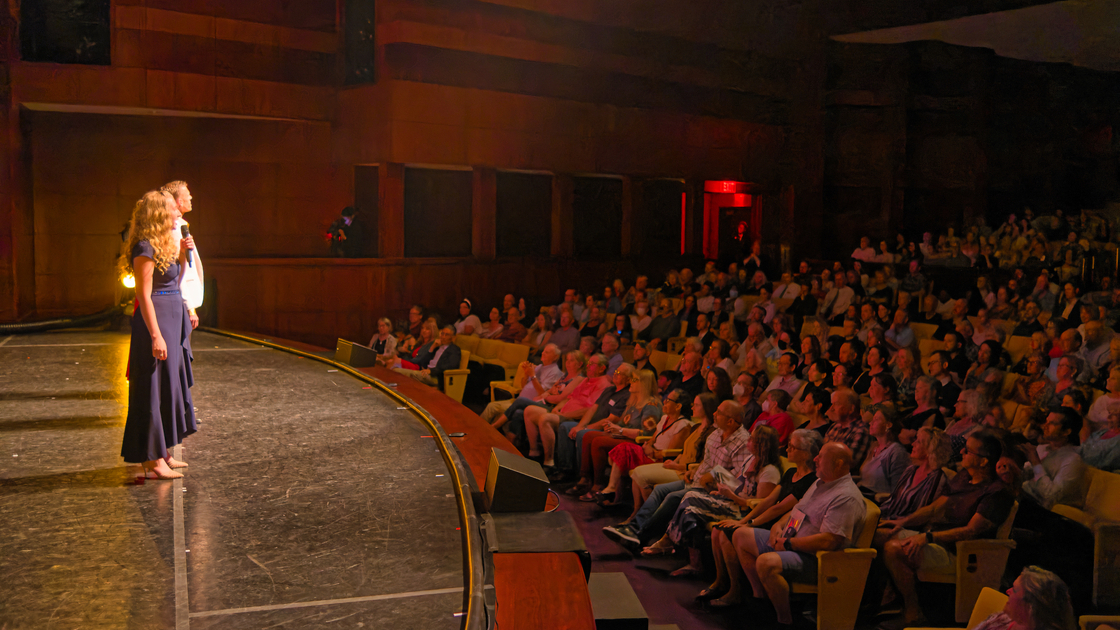 OKLAHOMA—On Monday, June 6, about 555 patrons stood and clapped as 23 dancers completed the final steps of “Utopia,” the finale to Celtic Throne. This show was the first of 11 total summer 2022 performances. As dancers interacted with patrons in the lobby, crew members backstage were already packing up for the start of the 10-day Western tour.

Into two enclosed trailers went 12 LED wash lights; eight moving headlights; close to 3,000 feet of lighting cables; approximately 300 costumes; a keyboard and other musical instruments; set pieces including stairs, a bandstand, the throne and stone, the 2,150 square feet of dance flooring, and the other equipment ranging from streamers to snacks.

About 8 crew members departed on Monday for the first road show at the Newman Center in Denver. The dancers, staff and chaperones left Tuesday, spending the night at a hotel in Limon, Colorado, before arriving at the “Mile-High City,” 4,080 feet higher in altitude than Edmond. Many of the dancers said they could feel the effects of the thinner air.

When the dancers arrive, the backstage crews have laid down the dance floor material and large stage props, such as the throne, the bandstand, and the stairs. Crew members program lights, music and sound elements of the show and set up a pair of projectors to align perfectly in order to render images on the cyclorama–generally 40 feet wide and at least 20 feet tall–bright but not blurry. They also review each lighting change, to ensure that each cue is properly adjusted to the design of each venue.

Since most theaters lack sufficient dressing room space close enough to the stage, pipe and drape needs to be assembled backstage for the dressing rooms. The costumes of each of the 38 dancers are arranged on racks in the order of the dance pieces, and bins are filled with shoes, props and other items the danceres need throughout the show.

The costume ladies, all of whom have children performing, find racks from the venue, backstage rooms and areas to curtain off for boys, girls and children to have separate changing areas. Then they begin organizing, assembling and in some cases ironing the 300 costumes and placing them on the racks. Most of the costumes were purchased and tailored, but the seamstresses made some of them from scratch, including the Highlanders costumes, made of Royal Stewart tartan fabric, the most widely worn tartan in the world.

In the hours before a show, dancers warm up, practice, drill and get a feel for the backstage area. For some dancers, transitions between stage entrances are as short as 40 seconds, during which they need to run to the other side of the stage and change costumes. They can often walk behind the cyclorama to get from one side of the stage to the other, but in some theaters walking behind the cyc makes it ripple, causing the images to look warped, so performers find and practice taking an alternate route. After a catered meal downstairs, the crew does final preparations for the show.

After the Denver show, Soprano Jessica Brandon said, “Denver provided some unique challenges, and we had to adjust some things on the fly, but I feel like we’ve gotten to the point where obstacles don’t throw us as much as they used to. So even if it’s not ideal we can work it out.”

A total of 487 patrons purchased tickets for the first road show in Denver.

On Friday, June 8, the cast and crew headed to South Dakota. While on the highway, one of the vans sustained a fluid leak and an engine temperature warning that prevented the vehicle from going any faster than 30 mph. Tour coordinator David Vejil said, “Thankfully there was a mechanic who was free that day and could fix it in less than a day. I called around 15 places, and they were all booked but this one.”

The following day the group attended Sabbath services with a few Philadelphia Church of God members from the area at the same Rapid City venue where the Church had held the Feast of Tabernacles two years prior.

On Sunday morning, Celtic Throne co-director Brad Macdonald reminded dancers that the opportunity to dance at Mt. Rushmore, outside Rapid City, had been the catalyst for arranging the entire summer tour.

First the dancers did one promotional show in the town of Keystone on a stage that was set up next to the road, where people driving by could catch glimpses. The troupe arrived at Mt. Rushmore early in the afternoon. The costume ladies had set up the racks inside the amphitheater at the base of the monument. The dancers changed into costumes for a 2 p.m. promotional, with weather forecasters predicting rain at 3 p.m. But by the 4 p.m. promotional, the skies were still blue. The final promotional show at 7 p.m. attracted the largest crowd of the day.

One of the dancers in the troupe said, “Every aspect of that day was a miracle. Mr. Macdonald said there was a chance that we wouldn’t be able to drive the trucks down to the stage to unload the costumes. There was also a chance that we wouldn’t be able to have that small room in the back to get changed in. But as the day went on, we could see each problem being solved, which allowed us to change into costume easily, and get some amazing footage. … It was inspiring to see God’s hand in every aspect of that performance. Even being able to perform there was a miracle.”

Celtic Throne showed for the third time that tour on a Monday evening at The Monument, formerly called the Civic Center, where the group had performed in 2020. A total of about 643 purchased tickets. As the performers mingled with patrons in the lobby after the show, a lady who had been subscribed to the Trumpet magazine for 20 years and who listened to the Trumpet Daily Radio show came up to talk to one of the dancers. The dancer informed her that Trumpet Daily Radio show host Stephen Flurry was at the venue, and the lady was able to meet him.

On Tuesday, the backstage crew set out early for the 12-hour drive to Amarillo, Texas. The rest of the troupe drove to Limon, stayed the night, and drove to the Globe-News Center for Performing Arts in Amarillo on Wednesday. In the hotel, dancer Zoe Hilliker made calls to Irish Dance schools in the area offering them discounted tickets on the show, one of several strategies the Church used to promote the show, including TV interviews, radio interviews and electronic billboards.

After performing for about 543 on Thursday, multiple dancers commented on the energy of the North Texas crowd. Jacqueline, one of the dancers who had been to that theater before, said, “I just remember that audience as always loving every part of Celtic Throne. They clap and cheer throughout the whole thing, whereas some of the other audiences don’t.”

Dancer Hannah Worrell said she spoke to a woman after the show who had seen the show the year before. “She said it was so much better—she noticed all the changes we had made.”

The following day, the cast and crew hit the road to spend a few days at home before commencement of the Eastern Tour. They had traveled about 2,200 miles and still had 2280 miles to go.