Students Spruce Up Field House With a Mural
By Ellie Hilliker • May 6, 2022 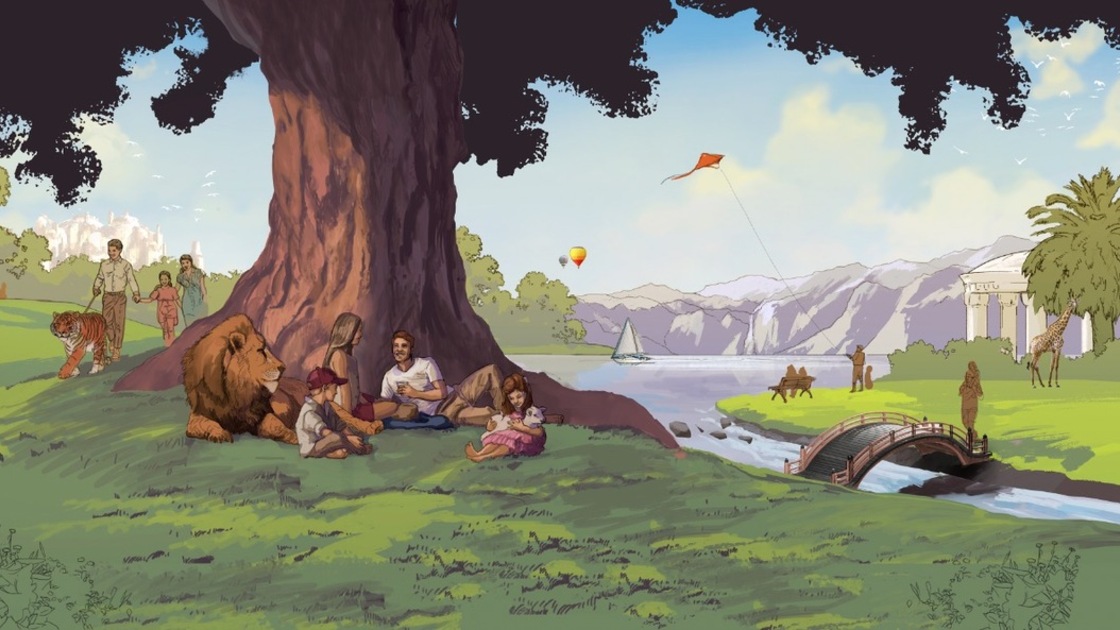 EDMOND–Over the course of spring break in mid-April, more than 60 Herbert W. Armstrong College and Imperial Academy students assisted in painting a new mural on the back wall of the John Amos Field House stage. The mural was designed by Philadelphia Church of God staff artist Gary Dorning and depicts a scene of a family picnicking with a lion beneath a large tree, representing a time of peace prophesied in the Bible. The background portrays families taking walks, sailing and flying kites.

Staff artist Julia Goddard laid out a plan that allowed anyone to participate in painting the image, whatever their skill level. On the first evening of work, Goddard set up a projector to show the basic outline of the drawing. Students traced the outline onto the wall with markers and then began painting in the base colors for the overall shapes. Once this foundation was complete, the more experienced artists brushed over parts that required more intricate detail.

Herbert W. Armstrong Junior Josephine Oswala said that she signed up because she “wanted to be a part of history, a part of beautifying the campus.”

The stage, no longer used for weekly Church services or musical performances, has been used as a student lounge for several years. Evangelist Wayne Turgeon, who oversaw the buildings and grounds department for a number of years before transferring to the United Kingdom-Europe-Africa regional office, said the inspiration for the project came years ago because, with the curtains now open most of the time the stage’s empty white wall seemed to be “crying out for something to fill it up.” The original subject of the painting was New Jerusalem, but Pastor General Gerald Flurry said he felt that depicting it would rely too much on speculation. He then approved a scene from the Millennium, the prophesied 1,000-year period of world peace under the government of God. Artists created several drafts but had a hard time deciding on one. For this and other reasons, the project sat untouched for years. But in early April, Dorning sketched the draft that would become the final version, and the project was underway.

Mr. Turgeon expressed his hopes that the mural will “inspire the students, and any other members who see it, to think immediately of the incredible future that lies ahead for all of mankind.”