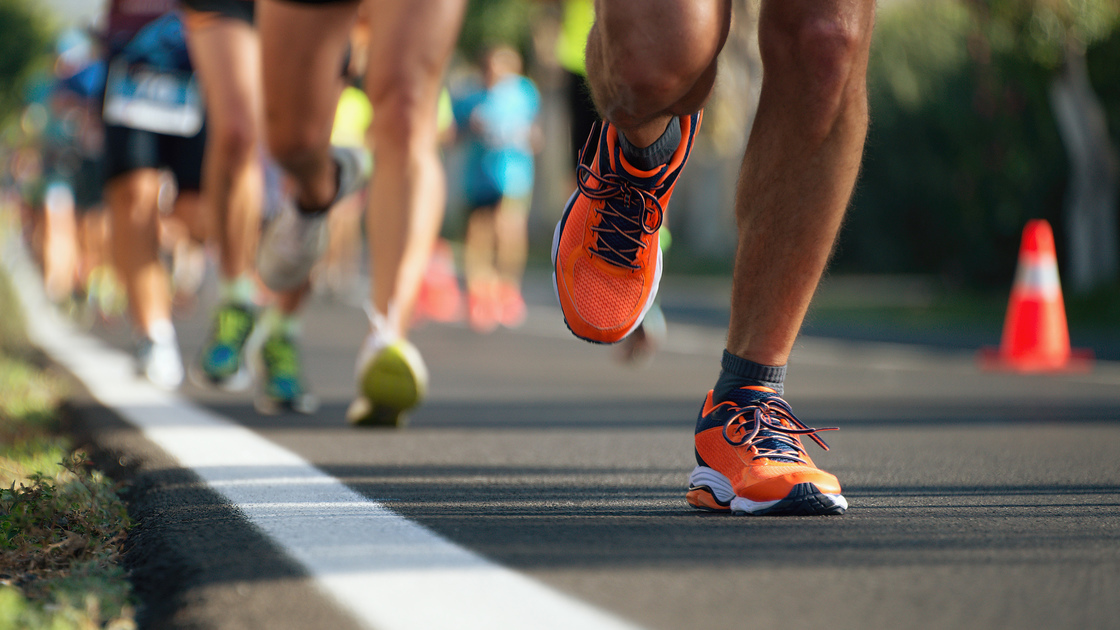 By mile 15, my legs were really hurting. I had been keeping up with the 4-hour, 30-minute pace runners (which is better than I’d ever done), but now they were leaving me in the dust. On top of that, now the people in the wheelchairs were passing me too. That was a big blow to the vanity that had been building up during the first 13 miles—those people had to wheel themselves 26.2 miles, and they were still going to beat me!

By mile 16, my legs hurt so badly that I told myself I would walk for just a little bit.

That was a big mistake.

As soon as I started walking, both my hamstrings began to cramp simultaneously. No amount of walking would help, and I couldn’t start running again either. I had to stop by one of the medical tents so they could rub out my legs.

Once I was back out on the course, my legs still hurt just as badly, and I began to have thoughts of giving up. I still had 10 miles to go, and I just didn’t see how it was possible. I was in so much pain. The only thing that kept me going was the goal I had set for myself before the race: Finish. Finish the race. You have to finish. I forced myself to keep running.

Somehow, I got through the next five miles. At about 21 miles into the race, all of the pain in both of my legs seemed to transfer to my right knee. Pain exploded from my knee and radiated throughout the rest of my leg. I started walking again, but the pain didn’t go away. I couldn’t believe it. I still had five miles to go, and I could barely even walk!

I was overwhelmed, and I could feel hot tears welling up in my eyes. I stopped completely and bent over, hands on my knees, gasping for breath. I must have been a sorry sight because all a sudden, a police officer appeared next to me and said, “You don’t have to keep going. I can give you a ride to the finish line in my patrol car if you want.”

He was offering a steady hand to a drowning girl, and I almost grabbed it. But then my head cleared, and I knew I couldn’t take him up on his offer. I remembered my goal: Finish. Finish the race. I would finish this race. I would finish, even if I had to crawl over the finish line. I renewed that promise to myself as I looked the police officer in the eyes and said, “No thank you. I can finish it.”

After that, I told myself that I just had to keep running. I couldn’t walk the rest of the way. I wanted the race to be over as quickly as possible. So I began to do a slight jog, or as much of a jog as I could manage. Each time I stepped on my right leg, pain shot through my knee. But I kept going, and eventually, the pain subsided a bit. I found that as I long as I kept moving forward at the same pace, the pain wasn’t as bad. I just had to keep running.

By the time I got to mile 26, one thought overpowered everything else in my head: I’m almost finished! Another college student was running with me at this point, and we were both in a lot of pain. But we could see the finish line now. At mile 21, it was only the thought of finishing the race that kept me going forward. But now I could see the finish line, and I knew that all the pain had been worth it. A mixture of relief, joy and a profound sense of fulfillment welled up inside of me as we used our last burst of energy to cross the finish line. Five hours and 50 minutes after we started, we finished the 2018 Oklahoma City Memorial Marathon.

The Bible compares our lives to a race. Sometimes, as we are running along in life, we might have an uncomfortable situation or two—something like a cramp along the way. It might not be debilitating, but it makes running harder. Other times, we might be hit with a trial so severe that it knocks the wind out of us and makes us feel like we couldn’t possibly keep running. It is all we can do to keep staggering forward, and in the moment, the reward of finishing the race might not seem worth the amount of pain that we are in.

In the midst of those trials, we have to remember our goal in the race: Finish. Finish the race. No matter what, just keep running. We have to remember the reward that is waiting for us when we cross that finish line. It’s much better than a sense of fulfillment after completing a marathon.

That incorruptible crown at the end of the race is greater than anything this physical life can offer us (1 Corinthians 9:24)—and it will make any of the trials we are going through pale into insignificance (Romans 8:18). We just have to keep running.