A Tribute to Our Friend
Two pillars of Dr. Eilat Mazar’s legacy
By Jude Flurry • March 1, 2022 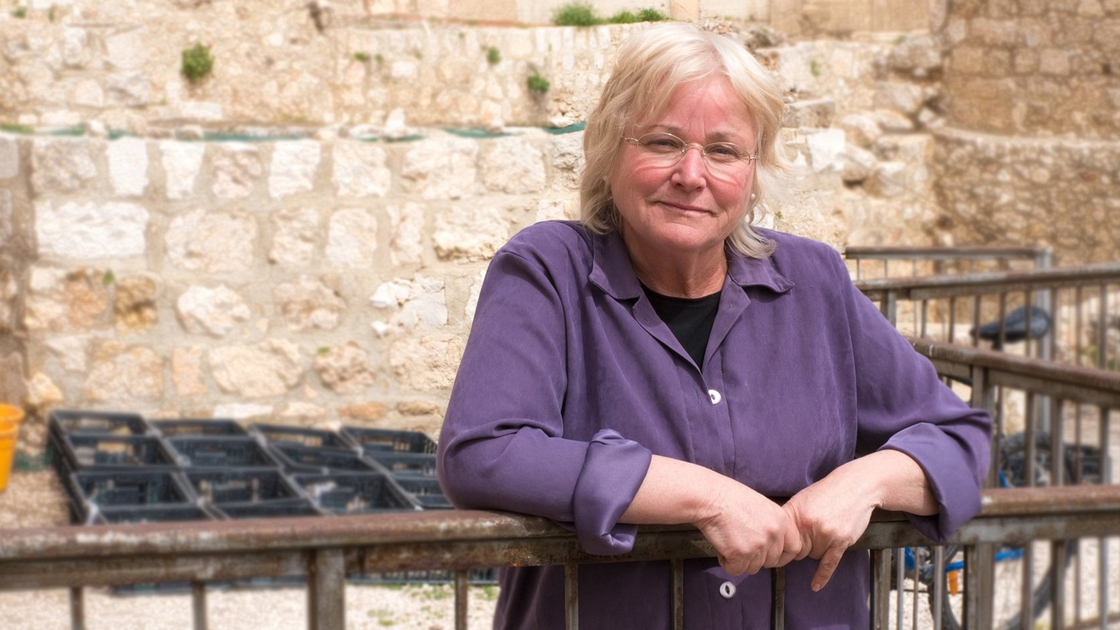 And that was fitting, because the author of this paper was not your typical pedantic, bespectacled, tweed-jacket wearing academic. It was actually an impassioned female archaeologist named Eilat Mazar. You may have heard of her.

It was in that 1997 Biblical Archaeology Review article that Dr. Mazar first published her theory on the possible location of King David’s palace. Her argument was based on a pretty brilliant chain of Biblical reasoning.

2 Samuel 5:7 says that David captured “the stronghold of Zion” when he took Jerusalem from the Jebusites. For geographical reasons, Dr. Mazar and other scholars believed this fortress was located in the northern part of the City of David, near the top of a huge sloped wall called the stepped-stone structure—an area formerly excavated by a British archaeologist named Kathleen Kenyon.

However, Dr. Mazar put this information together with another scripture: 2 Samuel 5:17. This verse records a Philistine invasion that occurred immediately after King David built his palace in Jerusalem. “And when the Philistines heard that David was anointed king over Israel,” it says, “all the Philistines went up to seek David; and David heard of it, and went down to the fortress.”

Dr. Mazar’s entire argument rested on those last four words: down to the fortress. Logically, David would have gone down to the fortress from his newly constructed palace. Anciently, Jerusalem was built on a sloping ridge—surrounded by the Kidron Valley to the east and the Tyropoeon valley to the south and west. That means that if David had approached the Stronghold of Zion from the south, east, or west, he would have been going up to the fortress, not down. Therefore, David’s newly constructed palace must have been located north of the fortress of Zion.

This was a radical idea, and Dr. Mazar knew it. “If some regard as too speculative the hypothesis I shall put forth in this article,” she wrote at the start of the piece, “my reply is simply this: Let us put it to the test in the way archaeologists always try to test their theories—by excavation.”

It wasn’t until eight years later, in 2005, that Dr. Mazar received the funding she needed to conduct that excavation. But when she did, she found exactly what she was looking for: a massive stone structure dating to the 10th century B.C.—the time of King David.

It was an amazing discovery, and God blessed the pcg with the opportunity to be a part of it. But that discovery never would have happened had Dr. Mazar not taken the Bible at its word.

“There is no reason to doubt the accuracy of the Biblical description,” she had written in her article. “The Bible is quite careful in its use of going up and going down.”

Whereas other scholars saw the Bible as a fictional story book, Dr. Mazar used it as an archaeological handbook.

And that was a great pillar of her legacy: She used the Bible as an archaeological handbook.

Unsurprisingly, Dr. Mazar’s belief in the Bible brought torrents of criticism from the archaeological community and the mainstream media. But she was never one to back down to critics.

As a child, I got to witness her fighting spirit firsthand when I met her in Jerusalem. I don’t remember much from my time in Jerusalem, because for most of my trips there I was between six and ten years old—but this incident is burned into my mind.

We were driving through the crowded Jerusalem streets in Dr. Mazar’s dusty, banged-up minivan. Now, people in Jerusalem tend to drive aggressively. There’s lots of shouting and anger and horn-blaring involved. In this particular case, the driver behind us seemed to take issue with everything Dr. Mazar was doing—and he was letting her know with his car horn.

Instead of changing her admittedly oblivious driving style to appease the man, Dr. Mazar stopped. Literally.

She parked her car in the middle of the bustling two-lane road. She opened the door, stepped one foot onto the pavement, turned around, and stared directly into the man’s soul for about five seconds. Then, she got back in her van and carried on. We didn’t hear a sound from that man for the rest of the trip.

Apparently, Dr. Mazar was a big fan of abandoning her vehicle to confront aggressors.

I wasn’t there for this next story, but it’s pretty legendary. One time, Dr. Mazar was driving her minivan through a hostile Arab neighborhood. Out of nowhere, a Palestinian boy on the street hurled a rock at her car. In a flash, this fifty-something-year-old mother of four lunged out of her vehicle and pursued her attacker through one of the most dangerous neighborhoods in the world.

That would probably terrify most of us, but considering that Dr. Mazar had two years of compulsory military service experience and a pistol in her purse, it probably didn’t faze her too much.

On one occasion, Dr. Mazar had the opportunity to present her discovery of Nehemiah’s wall to a standing-room-only crowd of archaeologists in Tel Aviv. Tel Aviv is one of the most liberal cities in the world, and, needless to say, the crowd was extremely hostile. In fact, the archeologist who spoke after her didn’t even bother to present his own findings. Instead, he used all his time to discredit Dr. Mazar, making some preposterously false claims in the process.

Was she upset by that? Probably. But she didn’t show it. And she certainly didn’t apologize for her so-called radical views. Dr. Mazar knew that there was no reason to apologize, no reason to compromise, no reason to back down when the truth was on her side.

Undoubtedly, she felt intense pressure to conform. If I just compromise a little, she probably thought, maybe the establishment will respect me. But Dr. Mazar’s story teaches us that the opposite is true. In the long run, many scholars, journalists, and archaeologists came to respect her precisely because she wouldn’t back down. And that was as true on the street as it was in the intellectual arena.

That was from Israel Finkelstein, one of Dr. Mazar’s bitterest critics. I don’t think Dr. Finkelstein would ever have expressed such respect for Dr. Mazar had it not been for the second pillar of her legacy: She never backed down when she knew the truth was on her side.

Israel Finkelstein wasn’t the only person to pay respects to Dr. Mazar. Perhaps the best obituary was published in the august 2021 issue of the Watch Jerusalem magazine. It was titled, “A Tribute to Our Friend,” and it was written by my grandfather. This is what he had to say: “Although Dr. Mazar is no longer with us, we are beginning a new chapter. Personally, I am more motivated than ever to uphold and build upon my friend Eilat Mazar’s legacy.”

Doing these things is perhaps the best tribute we can give to our friend.