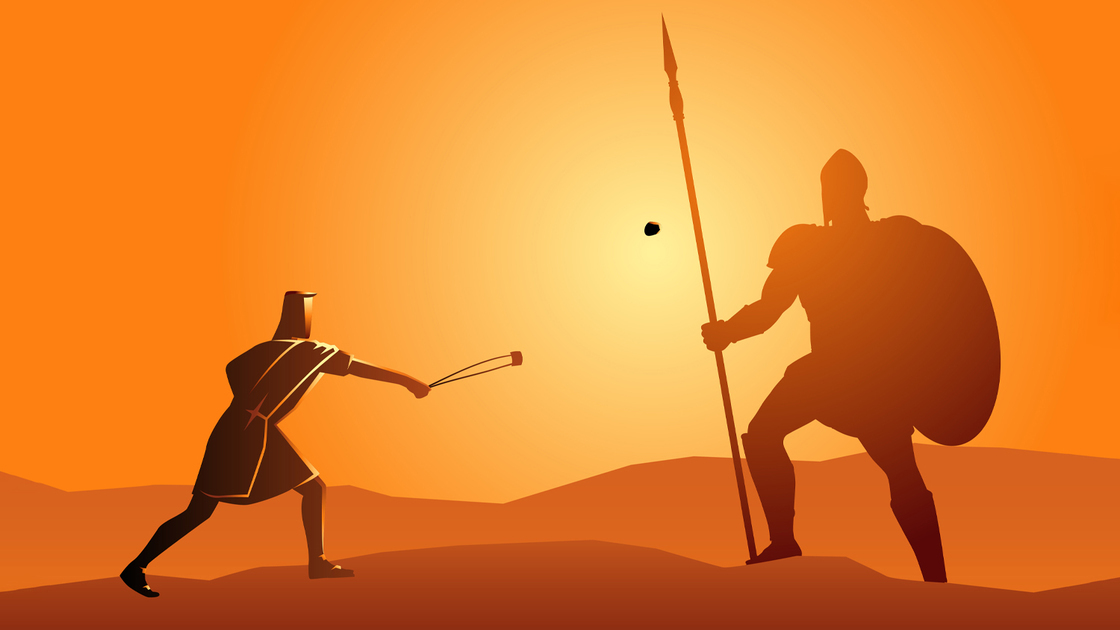 In his first sermon at the 2021 Feast of Tabernacles, Pastor General Gerald Flurry said: “If you are going to have a strong nation, you are going to have to have a strong military.” He went on to explain how true Christians, as God’s soldiers, must be soldiers of faith, trusting and relying on God. In that sermon, he repeatedly referenced the attributes of soldiers in the context of the Key of David vision, pointing the brethren to David’s example of fighting.

Those of you reading this are probably at or very close to the age David was when he killed Goliath and defeated the Philistines. Let’s focus on one attribute David exhibited in that epic showdown: He ran to the fight!

“And it came to pass, when the Philistine arose, and came and drew nigh to meet David, that David hasted, and ran toward the army to meet the Philistine” (1 Samuel 17:48). David was urgent. While the rest of the Israelite army stalled to buy more time, David ran right up to the Philistines.

“And there went out a champion out of the camp of the Philistines, named Goliath, of Gath, whose height was six cubits and a span” (verse 4). Six cubits and a span means Goliath was somewhere between 10 or 11 feet tall! Imagine that—someone literally twice your size. You would need a ladder just to give him a high five! That’s definitely someone you wouldn’t want to mess with.

“The giant’s head was encased in a huge brass helmet that resembled a caldron,” The Bible Story states. “His coat of mail weighed more than 150 pounds. Heavy brass semi-cylinders enclosed his lower legs, and a wide brass plate, to protect his chest, was carried on his back except during battle. His entire armor weighed about 300 pounds, but it wasn’t too much of a burden for him, since his weight must have been close to five times as much as that of his armor.”

That would mean Goliath weighed 1,500 pounds—nearly 1 ton! If he sat on you, it would be like being squashed by a bison. By these estimates, Goliath could have been 12 feet tall, almost 10 times heavier than the average person, and wearing a coat the weight of a modern-day refrigerator.

“And the staff of his spear was like a weaver’s beam; and his spear’s head weighed six hundred shekels of iron: and one bearing a shield went before him” (verse 7). Six hundred shekels equals about 18 pounds. That means the head of Goliath’s spear was two pounds heavier than the bowling ball that pro-bowlers use. This man was a walking tank!

I hope you don’t have any nightmares about a 12-foot-tall fridge man throwing bowling balls at you after this article, but I do hope you have a better sense of what David was up against. If it were you and Goliath, how do you think you would fare? Would you be able to look past all that and trust in God’s protection?

David wasn’t wearing any armor (verses 38-39), and the only weapon he had to fight this “tank” with was a sling and five little stones. On paper, this was going to be an easy win for Goliath. But David didn’t just stroll up to Goliath or try to sneak up on this mountain of a man. David sprinted toward this challenge. He was confident because he knew that he had God behind him and Goliath did not.

Notice what happened when David came face to face with Goliath. Goliath started to taunt David and tried to discourage him: “And when the Philistine looked about, and saw David, he disdained him: for he was but a youth, and ruddy, and of a fair countenance … And the Philistine said unto David, Come to me, and I will give thy flesh unto the fowls of the air, and to the beasts of the field” (verses 42 and 44). You had better give up or you’re going to die like everyone else who has ever dared to fight me, Goliath said. Did David give in to these taunts? Read on:

“Then said David to the Philistine, Thou comest to me with a sword, and with a spear, and with a shield: but I come to thee in the name of the Lord of hosts, the God of the armies of Israel, whom thou hast defiled. This day will the Lord deliver thee into mine hand; and I will smite thee, and take thine head from thee: and I will give the carcasses of the host of the Philistines this day unto the fowls of the air, and to the wild beasts of the earth; that all the earth may know that there is a God in Israel” (verses 45-46). David had total faith in God. He knew that he by himself would never be able to defeat Goliath, but with God behind him, he knew he could win any battle. With godly confidence, David was able to put aside any fears he had and tell Goliath the truth—that God was going to crush him!

We need to run toward the fight like King David did. No matter what obstacle is in front of you, Satan wants you to focus on its size and difficulty so you give up. David didn’t do that. He focused on God’s promises and ran through whatever stood in the way of God’s plan.

“And David put his hand in his bag, and took thence a stone, and slang it, and smote the Philistine in his forehead, that the stone sunk into his forehead; and he fell upon his face to the earth” (verse 49). Against all odds, David prevailed because he was doing God’s will. Teens, God is on your side just like He was on David’s! Run to the fight!