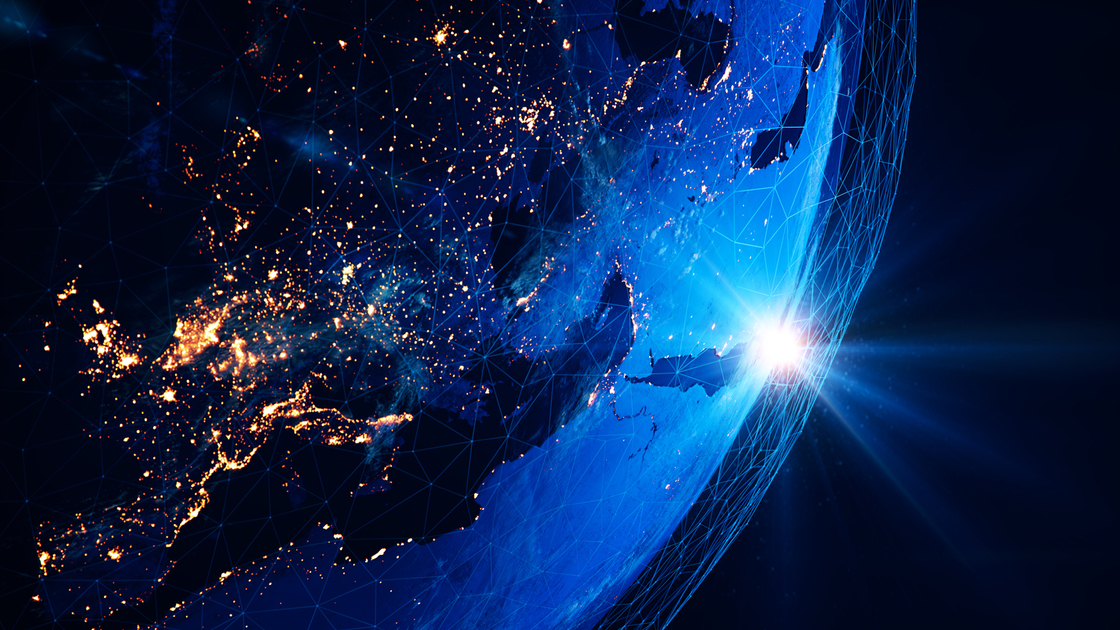 In Ezekiel 1, God showed Ezekiel a vision of intense brightness.

But there is another god discussed in Ezekiel. It is important that we keep bringing that vision of the true God back into our lives, because there is this other god, a great deceiver, who knows God and knows His plan, and is trying very hard to foist upon us a counterfeit of the true God.

Let’s get some background on this god.

In Ezekiel 28, there is a prophecy about “the king of Tyrus.” But this clearly is not speaking of a mortal man. In fact, this is referring to Lucifer, who became Satan. “Son of man, take up a lamentation upon the king of Tyrus, and say unto him, Thus saith the Lord God; Thou sealest up the sum, full of wisdom, and perfect in beauty. Thou hast been in Eden the garden of God; every precious stone was thy covering, the sardius, topaz, and the diamond, the beryl, the onyx, and the jasper, the sapphire, the emerald, and the carbuncle, and gold …” (verses12-13). Lucifer was right there in Eden, the garden of God.

“Thou art the anointed cherub that covereth; and I have set thee so: thou wast upon the holy mountain of God; thou hast walked up and down in the midst of the stones of fire” (verse 14). Lucifer was one of only three archangels mentioned in the Bible. He was one of the highest-ranking angels God created, if not the highest. His prestigious position was that of a covering cherub. What did he cover? The very throne of God—“in the midst of the stones of fire.”

God Himself gave Lucifer a position right over His throne, as a covering cherub! He was right there with God, probably the most powerful of the three archangels the Bible mentions.

But then he and his angels rebelled.

“Thou wast perfect in thy ways from the day that thou wast created, till iniquity was found in thee” (verse 15). The word iniquity should be translated lawlessness. Sin is transgression of the law. God found lawlessness in Lucifer.

“By the multitude of thy merchandise they have filled the midst of thee with violence, and thou hast sinned …” (verse 16). Look at the world today! Why do we see all this violence around us? Why are our major cities plagued with crippling violence? Because Lucifer was filled with violence after he rebelled. He is the god of this world. It is a lawless way of life that will never work.

Verse 16 concludes, “[T]herefore I will cast thee as profane out of the mountain of God: and I will destroy thee, O covering cherub, from the midst of the stones of fire.” God is simply reminding Satan of his history. His responsibility was to cover the majestic throne of God. No angel was closer to God! Look what he had, and look where he is now! “Thine heart was lifted up because of thy beauty, thou hast corrupted thy wisdom by reason of thy brightness: I will cast thee to the ground, I will lay thee before kings, that they may behold thee. Thou hast defiled thy sanctuaries by the multitude of thine iniquities, by the iniquity of thy traffick; therefore will I bring forth a fire from the midst of thee, it shall devour thee, and I will bring thee to ashes upon the earth in the sight of all them that behold thee. All they that know thee among the people shall be astonished at thee: thou shalt be a terror, and never shalt thou be any more” (verses 17-19). It is all over for Satan. He has no future, no hope. God promises that he will never rise again.

Satan and the demons failed dreadfully and disastrously. They disqualified themselves from ruling over the Earth and the universe.

We must look closely at what happened to Lucifer because he is still in power on this Earth! He despises having his failures exposed. He detests the thought of being cast into outer darkness. He knows his time is short. He is discouraged, depressed and passionately hateful! He has terribly deceptive power, and his primary target is the very elect of God—that means you, if you are in that category!

If you want to really understand Satan’s power, look at Isaiah 14. “How art thou fallen from heaven, O Lucifer, son of the morning! how art thou cut down to the ground, which didst weaken the nations! For thou hast said in thine heart, I will ascend into heaven, I will exalt my throne above the stars of God …” (Isaiah 14:12-13). “Above the stars” means above all the angels—but Satan has even greater ambition than that.

Notice: “I will sit also upon the mount of the congregation, in the sides of the north: I will ascend above the heights of the clouds; I will be like the most High” (verses 13-14). Here God records Lucifer’s thoughts as he prepared an attempt to depose God and steal His throne! That was Lucifer’s ambition! It was an insane attempt against the all-powerful Creator, but Satan was so full of self-will, vanity and bitterness, he actually tried it.

“Yet thou shalt be brought down to hell [the grave], to the sides of the pit. They that see thee shall narrowly look upon thee, and consider thee, saying, Is this the [one] that made the earth to tremble, that did shake kingdoms” (verses 15-16). This power actually shakes kingdoms and makes the Earth tremble! A lot of people on Earth tremble today because of this evil being and his fallen angels. These “stars” exert tremendous influence over men, because men absorb that same rebellious spirit.

Who today really believes that Satan has the power to crush nations, or lay nations low, or enslave nations? Do you believe Satan has power like that?

Your Bible says Satan and his demonic fallen stars have power over human beings and even nations! That is why they cause so many problems and get involved in such wars. They have nothing but bitterness and wrath in their minds because of their rebellion against God. That is the way it is when angels or when humans rebel against God. We enter into a bitterness that’s almost like an addiction to heroin. It is extremely dangerous.

And think about this: If he can do that to the nations, what can he do to you?

We must respect how great Satan’s power is and realize that only God can conquer it. Satan will do all he can to conquer us, and God wants us to draw on His power to conquer Satan instead. All those who are called during this present age must do so.

The Bible tells us how to protect ourselves from the devil very effectively. We must learn how to overcome Satan. If we submit ourselves to God and resist the devil, he will flee from us (James 4:7). God will show us how to conquer.

God assures us in His Word that we can conquer Satan. And He shows us how. With God on your side, you won’t have to fear the devil. You will always be a step ahead of him.

Those who do conquer and overcome the devil enjoy the kind of successful, happy, abundant lives that God wants all of us to live!

Why won’t men listen to God? Why won’t they quit worshiping the devil and heeding his message, and refusing to hear God’s message?

You can turn your life around. You can conquer any problem that comes your way—if you will just obey what God tells you to do. That is the best thing you could ever do in your life.