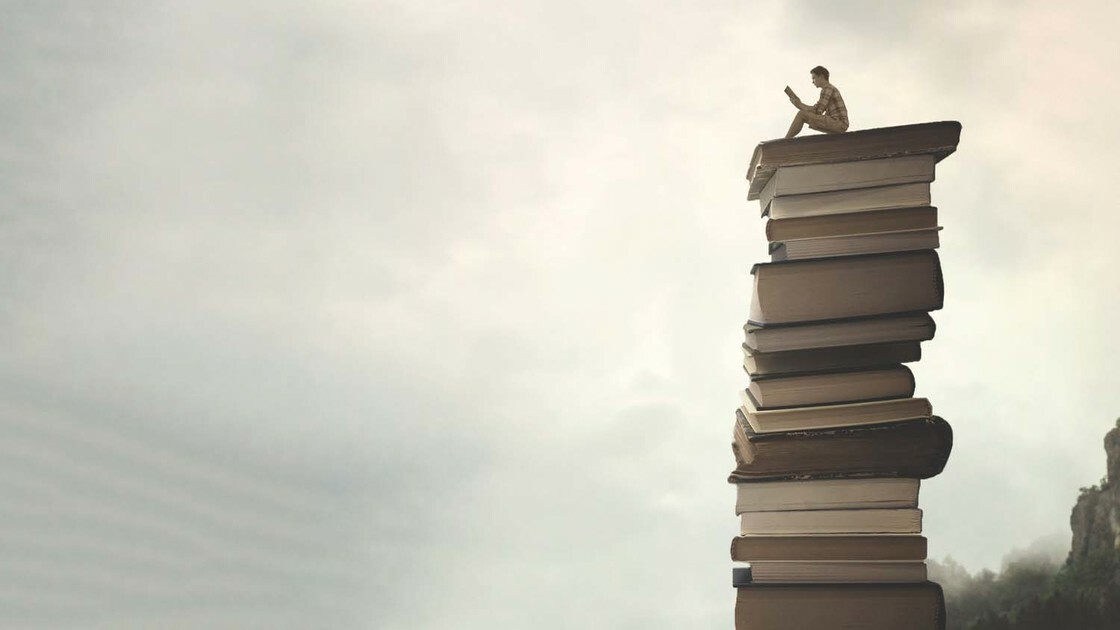 A Random House dictionary contains over 315,000 distinct entries. If you knew all those words, you would be considered a genius. But think about this verse: “Lift up your eyes on high, and behold who hath created these things, that bringeth out their host by number: he calleth them all by names by the greatness of his might, for that he is strong in power; not one faileth” (Isaiah 40:26). God has a name for each and every star in the entire universe! If you were to jot down all the stars just in the Andromeda galaxy in a dictionary, you would need 3 million dictionaries to get them all.

We are all about to wildly expand our vocabularies. The immensity of our vocabularies in the World Tomorrow is unfathomable right now. As the universe expands, so will our knowledge, education and understanding. As God’s elect today, our language should meet a higher standard than those in the world. The writers of the Bible are good examples of the type of high-quality communicators we should become.

King David is called the “sweet psalmist of Israel.” He was highly intelligent and skilled in other areas as well, such as music and dance. His text in the Bible is all written in poetic form—showing his skill as a communicator. He was a main driver in designing the throne room culture to praise and glorify God. It is this type of culture that God’s people must have as well.

“Now these be the last words of David. David the son of Jesse said, and the man who was raised up on high, the anointed of the God of Jacob, and the sweet psalmist of Israel, said, The Spirit of the Lord spake by me, and his word was in my tongue” (2 Samuel 23:1-2). David spread God’s words, and in an especially effective way. David’s last words paint a vivid picture: “The God of Israel said, the Rock of Israel spake to me, He that ruleth over men must be just, ruling in the fear of God. And he shall be as the light of the morning, when the sun riseth, even a morning without clouds; as the tender grass springing out of the earth by clear shining after rain” (verses 3-4).

Notice that David not only gave his son Solomon solid advice, he worded it in a way that would stick with him as he prepared to be the next king. He didn’t just say, “Be just.” He said that if Solomon were to be a just king, he would grow in glory like a morning sunrise and shoot up like grass after a rainfall.

But a high standard of communication is not only needed for world leaders or ancient kings. Look at 1 Samuel 3 to see what God accomplished with one educated teenager. “And the child Samuel ministered unto the Lord before Eli. And the word of the Lord was precious in those days; there was no open vision” (1 Samuel 3:1-2). Much like today, God’s Word was only available to a small number of people.

“And Samuel grew, and the Lord was with him, and did let none of his words fall to the ground” (verse 19). Samuel cherished every one of God’s words. In the fishes and the loaves miracle, Christ commanded the disciples, “Gather up the fragments that remain, that nothing be lost” (John 6:12). This is a metaphor for spiritual food. Samuel didn’t want any of God’s words to go to waste. You are in God’s remnant Church because your parents or grandparents didn’t let those words drop, but you must now guard them for yourself.

Every bit of education God gives us is valuable, even down to the particular wording God uses. Make it a goal to express every one of God’s words as perfectly as possible so you can teach them to someone else. My father wrote in The Last Hour booklet: “Receiving God’s message is just half of the responsibility. The second part is communicating it. And what a communication job! This message must be delivered to every person ever born!”

As a teacher for eternity, how effective will your classes be if you speak in vague, muddled terminology? Unclear speaking and writing indicate unclear thinking. It could also be a sign of being too passive about the truth. We must have a zeal, a wholehearted passion for what God has revealed to us.

If you think back on all the teachers you have ever had, you will realize that you learned the most from the ones who sincerely loved their subject. If you want to be a teacher like that, you must be consumed by your eternal class material: the Bible, Mystery of the Ages, The New Throne of David, etc. If you don’t care about your subject, your students won’t either, regardless of whether you use powerful language. Enthusiasm and expert language must be used together.

Proverbs 30:5 says that every word of the Bible is “pure.” Sure, there are a few errors due to translations, but there is still purity of language in the inspired words of the Old King James version of the Bible.

Some of the greatest figures of history like Shakespeare and Abraham Lincoln based their education off of the Bible. You don’t have to wait for the one pure language prophesied in Zephaniah 3:9 to start thoroughly studying your Bible. There will still be more to learn as a God being! If we neglect this process now, what does that show God about how we’ll act later?

Not only can mastering language help us individually, but there is evidence that it can affect the success of entire nations. Think of Genesis 35:10-11, where God transfers the blessings of Abraham to Israel. “And God said unto him, Thy name is Jacob: thy name shall not be called any more Jacob, but Israel shall be thy name: and he called his name Israel. And God said unto him, I am God Almighty: be fruitful and multiply; a nation and a company of nations shall be of thee, and kings shall come out of thy loins.” Israel would become a great nation (the United States) and a great company of nations (the British Empire). I believe a huge part of this promise was fulfilled by the spread of the English language. Could Britain have taken its traditions and culture all around the world if they had abandoned English and just gone with the native tongue of each region? Instead, they established their language everywhere they went. The fact that English is the most spoken language in the world today still gives America and Britain tremendous influence all over the globe. But as these nations decline, there are pockets of land within their own borders where English is not the primary language! That’s how impactful your ability or inability to communicate can be.

The leading progenitor of the English language was undoubtedly William Shakespeare. He had a great impact on world history simply because of his skill as a writer. He aided in educating the people of the British Empire. Is it possible God blessed Shakespeare to help Britons become educated? God gave that royal nation a royal education to give them the opportunity to do great things.

Shakespeare was the greatest playwright in history—you could call him the sweet psalmist of Britain. He did much to strengthen modern English. Prior to him, there were different dialects and pronunciations, but the success of his plays helped to fasten the language into what it is today. In fact, it is said that he invented around 1,700 words we use commonly, such as “critical” and “generous.” However, our grasp of the language has degenerated so much that most people can’t understand his poetry. His vocabulary boasted over 20,000 unique words; the average American vocabulary today only employs between 800 to 1,000 unique words per day. I’m not saying we should arrogantly try to speak over people’s heads, but that doesn’t mean we should be content with a limited vocabulary.

Winston Churchill was another figure who shaped history through his love of the English language. His speeches during the darkest periods of World War ii inspired Britons to stand up to the Nazis. If not for his love of English, he never would have been so influential.

Here’s what Churchill said about his early schooling: “[By being so long in the lowest form I gained an immense advantage over the cleverer boys. They all went on to learn Latin and Greek and splendid things like that. But I was taught English. We were considered such dunces that we could learn only English. … Not only did we learn English parsing thoroughly, but we also practiced continually English analysis. … Thus I got into my bones the essential structure of the ordinary British sentence—which is a noble thing. And when in after years my schoolfellows who had won prizes and distinction for writing such beautiful Latin poetry and pithy Greek epigrams had to come down again to common English, to earn their living or make their way, I did not feel myself at any disadvantage. Naturally I am biased in favor of boys learning English. I would make them all learn English: and then I would let the clever ones learn Latin as an honor, and Greek as a treat. But the only thing I would whip them for would be not knowing English. I would whip them hard for that.”

He called the proper structure of a sentence “a noble thing.” He worked hard to select the perfect words for each sentence. And what was the result? It helped him get much farther in life than an extinct language like Latin would have.

If you master the skill of communication, you will be more employable and more useful in your future career and for God’s Work.

English is the language God chose for the end-time nations of Israel and for the proclamation of the gospel message in the last two eras of God’s Church. And given the fact that English is so prevalent already, God may choose to base the language of tomorrow on it. Here’s what a wcg minister wrote in a January 1982 Plain Truth: “What language will God establish during the 1,000-year rule of the Kingdom of God upon the Earth? The Scriptures do not directly reveal which tongue will become the universal ‘pure language’! We’ll have to wait and see! But it may be based on English. For after all, God used Greek to replace Hebrew for continuing His written revelation when Greek had become an international tongue. Today English plays a similar role.” I suspect it will be far different from what we as modern Americans speak today, but let that statement serve as a prod.

Whether we speak English for eternity or only for a few more years, we can prepare for classes in the Millennium by mastering the skill of communication now. God has blessed us with a language with plenty of variety: English has the most number of words of any language.

“… It is written, Man shall not live by bread alone, but by every word that proceedeth out of the mouth of God” (Matthew 4:4). Your Bible is chock-full of the very words of life. Show God how precious they are to you by mastering the English language today!