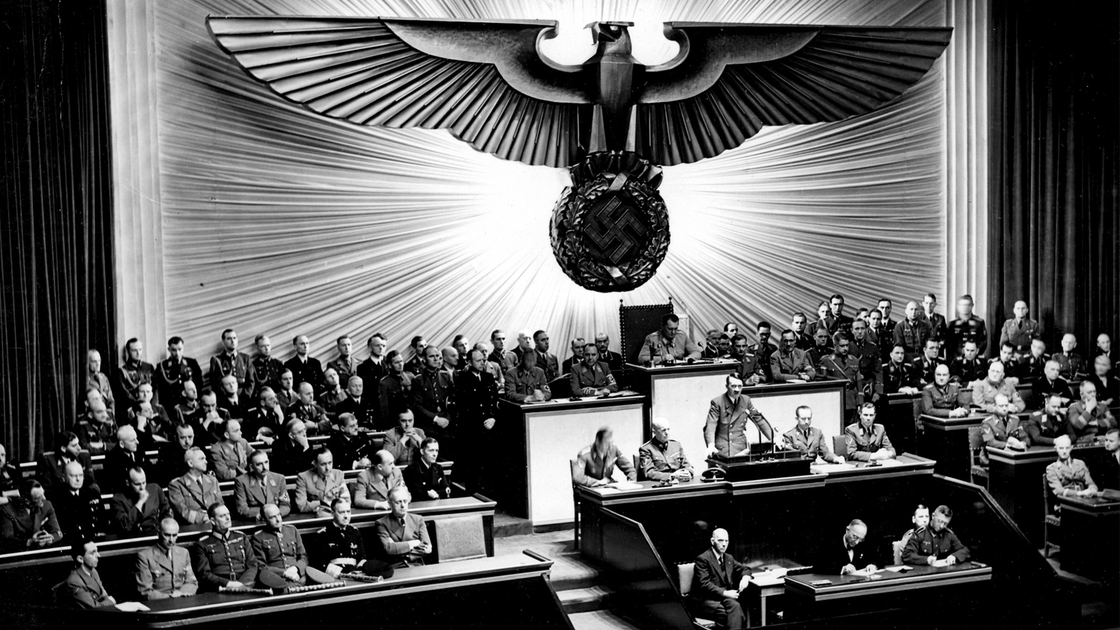 Adolf Hitler started World War ii, a war that killed 60 million people and inflicted some of the worst suffering in history.

Hitler believed that if you tell a big lie and repeat it enough, people will believe it. He wrote in Mein Kampf, “[I]n the big lie there is always a certain force of credibility; because the broad masses of a nation are always more easily corrupted in the deeper strata of their emotional nature than consciously or voluntarily; and thus in the primitive simplicity of their minds they more readily fall victims to the big lie than the small lie, since they themselves often tell small lies in little matters but would be ashamed to resort to large-scale falsehoods.”

That may sound strange, but it did happen to the German people. Hitler and his followers told people that the German Army did not lose World War i on the battlefield but instead had been stabbed in the back by the Jews. There was no evidence for this claim, but Hitler repeated it until people fell for it. He also blamed the Versailles Treaty as unfair and ruinous, and he held the West responsible for the political and economic turmoil plaguing the Weimar Republic. Germans came to believe Hitler, elected him chancellor, and supported his pogroms against the Jews. The Nazis exterminated 6 million Jews during the Holocaust.

We have not learned from this history as we should. Could something similar happen today? Could it happen in America? Could someone stir up a political revolution simply by repeating a blatant lie over and over and over till people come to believe it?

Well, this has already happened to a shocking degree!

Hermann Rauschning was the president of the Free City of Danzig in Germany from 1933 to 1934. He briefly joined the Nazi movement before breaking with it. He had many conversations with Adolf Hitler that he later wrote down in his book, Hitler Speaks.

He wrote that during these various talks, Hitler talked a lot about the psychology of lying. “What you tell people in the mass in a receptive state of fanatic devotion will remain. Words received under a hypnotic influence are radical and impervious to every reasonable explanation,” Rauschning recalled him saying on one occasion (emphasis mine throughout). On other occasions, Hitler said, “We are now at the end of the age of reason”; “A new age of magic interpretation of the world is coming, of interpretation in terms of the will and not of intelligence”; “There is no such thing as truth either in the moral or the scientific sense.”

Rauschning called Hitler a “master enchanter.” Hitler had an intense fascination with occult magic. Much of what he told Rauschning about “a new age of magic interpretation” came from the German occultist Ernst Schertel. Schertel’s book on magic was one of the most heavily annotated books in Hitler’s personal library.

Hitler’s annotations of Magic: History, Theory and Practice include highlights such as “the difference between ‘true’ and ‘false’ has disappeared” and “quite a lot is gained with [magic]: namely the possibility to intervene in this structure, that is to say change the world according to our will. But this is magic, and on this basis we are able to create reality where no reality is.”

Hitler believed that he did not need to rely on reason, intelligence, reality, absolute truth or God. Instead, he worshiped his own human will and believed he could create his own reality.

Consciously or subconsciously, many people today believe the same thing. They just keep lying until they convince themselves and those around them that they are right.

The Apostle Paul wrote about this very subject: “Let no man beguile you of your reward in a voluntary humility and worshipping of angels [demons, it should read], intruding into those things which he [has] seen [that is the correct translation], vainly puffed up by his fleshly mind …. Which things have indeed a shew of wisdom in will worship …” (Colossians 2:18, 23).

This is exactly what Hitler was talking about—will worship, but on another level—“magic interpretation … in terms of the will.” Hitler said, This is how it works now: Your logic, facts, evidence and truth won’t stop us. We follow a “magic interpretation” today. Will worship is impervious to truth! That is the new age Hitler wanted to usher in. There is no absolute truth, it says. Don’t look to the Bible for answers. Just have a magic interpretation of things. The implication is, Just follow our will!

Paul reveals what happens when you worship the human will: It leads to essentially worshiping demons! That is because the human mind is so vulnerable to Satan’s broadcasts, deception and influence, especially when full of vanity. Following human will really means following Satan’s will!

British journalist Melanie Phillips makes a good point in her 2010 book The World Turned Upside Down: The Global Battle Over God, Truth and Power that the ability to think rationally comes from God. “Western science grew from the novel idea that the universe was rational; and that belief was given to us by Genesis, which set out the revolutionary proposition that the universe had a rational Creator,” she writes. “Without such a purposeful intelligence behind it, the universe could not have been rational; and so there would have been no place for reason in the world because there would have been no truths or natural laws for reason to uncover.”

Satan and his demons reject God’s authority. They do not believe in absolute truth; everything is relative to their will. Christ said the devil “abode not in the truth, because there is no truth in him. When he speaketh a lie, he speaketh of his own: for he is a liar, and the father of it” (John 8:44).

When human beings reject God’s truth, they start worshiping their own opinions. They start thinking like Satan. When this type of thinking becomes entrenched enough, people stop even caring about the difference between true and false. They start trying to magically “create reality where no reality is.”

This thinking is taking over America’s political scene! Can you recognize it?

The radical left is casting aside the foundational law of the land, telling us that it is just getting in the way. We don’t need that old law, they insist. We know what justice is. You can trust us!

Such reasoning paves the way for tyrants! Tyrants hate facts and truths that limit their power. So they ignore reality in favor of their own “magic interpretation” of the world. Every tyrant is a tool that the devil can use to cast God’s truth to the ground (Daniel 8:12).

We must recognize the evil spiritual force behind this push to undermine the law!