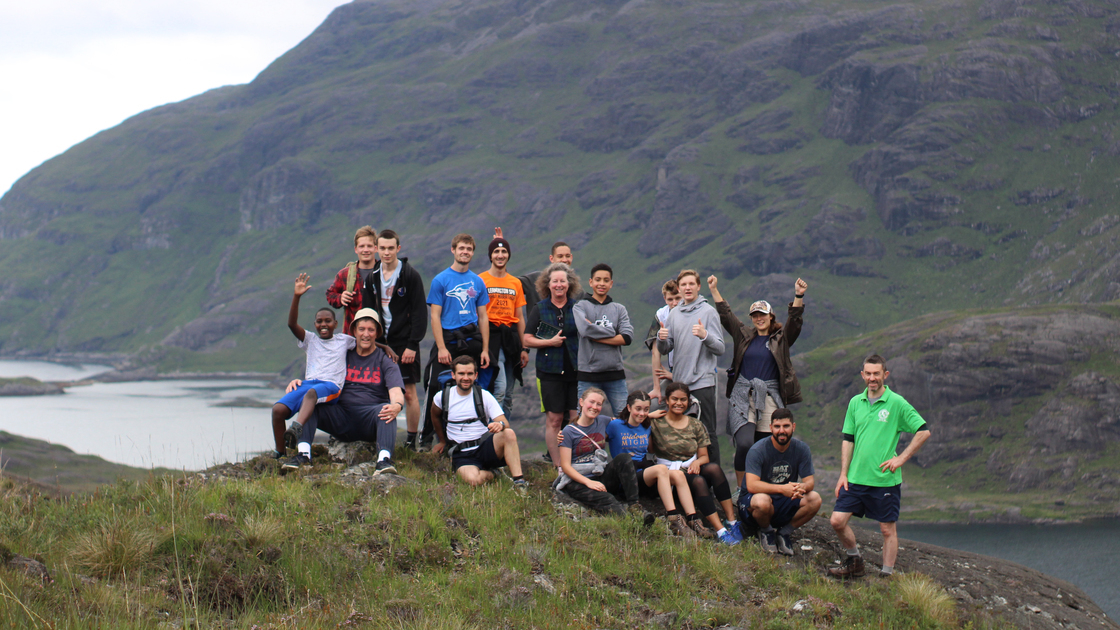 ENGLAND—On August 5, 16 Philadelphia Church of God teens and Herbert W. Armstrong College students, along with Evangelist Wayne Turgeon and his wife Laura, and Preaching Elder Colin Hercus set off from Edstone Hall northbound to an educational tour and camping experience.

After a drive of several hours, the group arrived at Hadrian’s Wall, which once fortified the 73-mile northern frontier of the Roman Empire on the isle. The group visited the Roman Army Museum on the site of what was once the Roman fort Vindolanda. They saw arrowheads, pottery and other artifacts that had been excavated, and watched a 3D video recreating the life of a Roman soldier and showing aerial views of the wall. The visitors were also able to stand on one of the best-preserved portions of Hadrian’s Wall.

The group then drove on to a Boy Scout camp in Northumberland, a peaceful setting under silver birch trees, beside a sheep pasture and a flowing stream. The first night included a game of ultimate Frisbee, then sitting around table, drinking hot chocolate and chatting together.

On Friday, several pitched in to help pack lunches for the day, then the group set off for Edinburgh, Scotland. The first stop was Holyrood Palace, the official residence of the British monarch in Scotland, where the students and teens viewed its manicured gardens with an abundance of fragrant flowers of all colors and varieties, its opulent furnishings, artistic portraits and magnificent jewels. The next stop was the Royal Yacht Britannia, the newest but now-decommissioned yacht of Queen Elizabeth II, which she previously used as a tool for promoting trade and good relations around the Commonwealth and beyond.

Sabbath services were held in a small hall at the Ford Boy Scout camp among the luscious greenery and chirping birds. The young group listened to a recorded Bible study given during the Summer Educational Program youth camp at Philadelphia Church of God headquarters in Edmond, Oklahoma. Camp assistant director Joel Hilliker focused on building ambition and the camp theme of being on fire for a royal future. Armstrong student Simeon Zekic delivered a sermonette about building the godly trait of appreciating quality music, literature and art, and Mr. Hercus gave a sermon exhorting young people to obey the Fifth Commandment “Honour thy father and thy mother,” by which a son or daughter also builds his or her relationship with God the Father. After dinner and fellowship, the group played an after-sunset game called Articulate.

Edinburgh Castle was the destination on Sunday, where the group visited an exhibition detailing the course of the Scottish military over hundreds of years. On display were uniforms of soldiers, weapons, medals and other artifacts. The young people also saw huge paintings of epic battles and videos of Highland dancing. The group then stayed the night in Grandtully, known as one of the best locations for white-water rapids in the United Kingdom.

On Monday, the teens and students and their chaperones continued farther north to the Isle of Skye. They then boarded a boat, passing seals lying on the rocks as they traveled to a remote part of the island.

“My favorite part was the Isle of Skye, because it felt like we were away from all human civilization and it was just us students, teens, Turgeons and Mr. Hercus,” said Armstrong student Kathleen Hochstetler. The mornings on Skye were so peaceful. There was so much room to think and clear the mind!”

The group was surrounded by spectacular natural wonders. A wild herd of red deer came right up to the tents. A few in the group tried fishing in the sea, although they did not catch anything. Perhaps the most memorable part of the stay on Skye was a four-hour hike to the top of a mountain. The weather was pleasant, and the view from the top was stunning.

“I’ve never climbed a mountain before,” said Corban, one of the teens. “It was inspiring.”

After returning to the camp, some took a swim in the loch to cool off, amid spectacular mountains towering around us. That evening, the group built a campfire and cooked s’mores with kosher marshmallows and chocolate Digestive biscuits, a staple of British fare. Gathered around the fire in this scenic place, the group conversed and enjoyed the peaceful evening.

On Wednesday morning, the group departed from Skye by boat, through rain and choppy waters. A few hours later, still damp from rain, the young people arrived at the last campsite at Glencoe in the Scottish Highlands. When the rain ended and the sun came out, a vivid rainbow appeared in the sky.

After a week of camping, the group arrived back at Edstone Hall on Thursday, tired but filled with special memories of an adventure spent with family and friends.

“It was wonderful to have an activity where the students, teens and ministry could bond together right before the new college semester started,” Zekic said. “I think we all got closer together because of it. It will be a trip I don’t forget soon.”