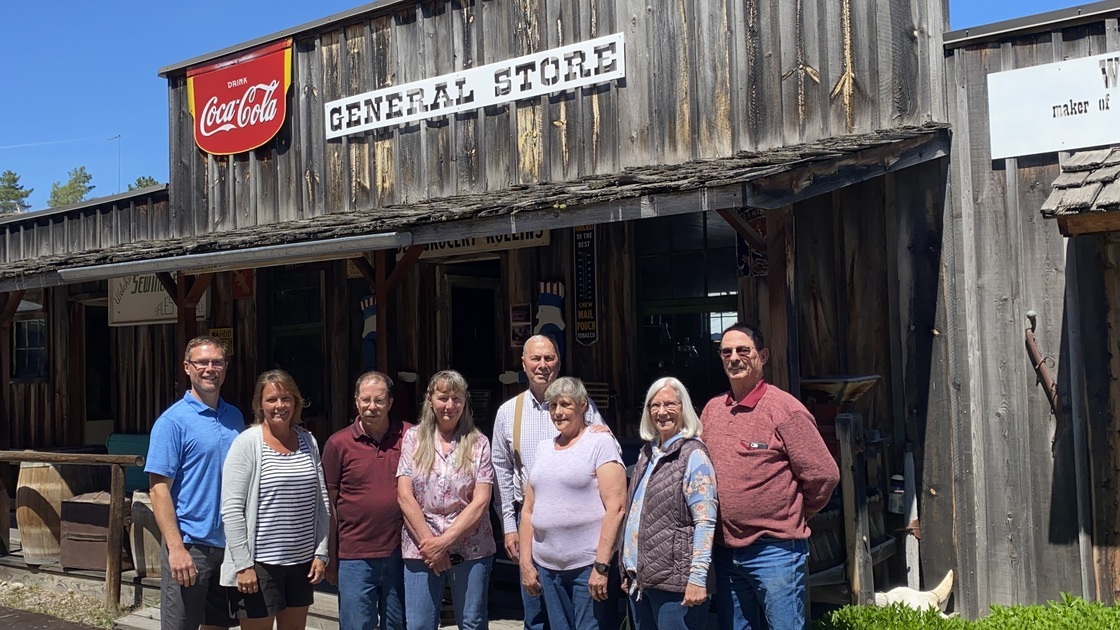 MONTANA—Eight Philadelphia Church of God members in Montana visited the Miracle of America Museum in Polson, stepping into a 250-year time capsule of unique national history.

The visitors were led on the two-and-a-half-hour tour by the founder of the museum, Gil Mangels, who said, “I felt my calling early on in life was to use my growing collection of artifacts to help teach others.” Eighty-year-old Mangels emphasized the importance of freedom and God’s intervention in America’s success, and warned of the nation’s demise if it fails to learn from its own history.

Mangels served in the military in the 1960s during the Vietnam War, a time when anti-war, anti-American self-loathing surged. He established the museum and invited foreign-born speakers to help Americans realize the blessings they had and to warn them how easily they could forfeit their freedoms.

“Most come to museums to be entertained,” he said. “Some will get it; some won’t.”

On the tour, he cited 2 Chronicles 7:14—“If my people, which are called by my name, shall humble themselves, and pray, and seek my face, and turn from their wicked ways; then will I hear from heaven, and will forgive their sin, and will heal their land”—and emphasized the word if.

As the group looked at exhibits including one showcasing farming, the plow and the importance of wheat, Mangels asked what biblical figure came to mind. Several responded, “Ruth,” and he commended them, saying that Christian schoolchildren who visit rarely provide the answer. He also said, “A lot of schools stopped coming to the museum because of the word ‘miracle in the title.’”

At an exhibit on the American Revolutionary War, the 80-year-old tour guide shared that his fifth great grandfather fought in the war and preferred to call it “The War of Restoration of Our God-Given Rights.” He also recited George Washington’s prayer at Valley Forge, choking up in an emotional expression of his respect for the general, the country and God.

The group then saw an exhibit about the Constitution of the United States of America, with Mangels quoting Exodus 18:13-26 and emphasizing how the Constitution’s framers designed it to avoid extremes of tyranny and anarchy by relying on religious principles, individual freedom and responsibility.

Another exhibit described the effect of the rule of law, free markets and equal opportunities for everyone to buy, sell, try, fail and be accountable for their own actions, a system that has lifted millions of people out of poverty in America and beyond.

Several exhibits were dedicated to major wars the United States has fought. Quotes that had members thinking about spiritual warfare included “To be prepared for war is one of the most effectual means of preserving peace” (George Washington); “Men can never escape being governed: Either they must govern themselves or they must submit to being governed by others” (Theodore Roosevelt); and “The only thing worse than war is slavery” (Gil Mangels).

Mangels noted that World War I led quickly to World War II, and that the world should have learned the lesson from not only World War I but also from Israelites like King Saul who did not fully obey God’s commands and vanquish the enemy. He shared the story of a 96-year-old lady whose scrapbooks held rare photos of Pearl Harbor and agonized over the fear that they would be shelved and forgotten. She gladly donated them to the museum and said, “Now I can die in peace.” She died two weeks later.

Another artifact was a letter from the Department of the Navy consoling a parent for their loss of their son to a Japanese air attack on the naval base at Pearl Harbor. It concluded: “It is hoped that you may find comfort in the thought that he made the supreme sacrifice upholding the highest traditions of the Navy, in defense of his country.”

Mangels also mentioned tithing several times and said he thought the principle may have guided the government’s advertising campaign encouraging citizens to devote 10 percent of their income to buying war bonds.

Countless war memorabilia spoke to duty and honor and how freedom equals responsibility. Among the artifacts hung a large poster quoting John Stuart Mill, “War is an ugly thing, but not the ugliest of things: the decayed and degraded state of moral and patriotic feeling which thinks that nothing is worth a war, is much worse…
A man who has nothing which he is willing to fight for, nothing which he cares more about than he does about his personal safety, is a miserable creature who has no chance of being free, unless made and kept so by the exertions of better men than himself.”

As the tour wound down, the group heard a recording begin to play: “Battle Hymn of the Republic.”

“I’ve been told by some I’m very opinionated,” Mangels said with a smile.

One member responded, “So are we!”

Roberta Foley said, “If our brethren can’t make it to Montana to see the museum in person, they can watch the various tour segments on the museum’s YouTube channel.”

As the group left, a museum staff member mentioned that their tour guide had been unwell for some time, but recuperated quickly, as if to be available that day for the tour. Members thought about the future, and one day putting into Mangels’s hands The United States and Britain in Prophecy to show him just what a miracle America truly was.

The Joneses said, “We were all reluctant to leave this wonderful place of ‘remembering’ but how fitting to experience this on Memorial Day weekend.”