A Prophesied Gap in Trump’s Presidency
God tells us what to expect next.
By Gerald Flurry • June 25, 2021 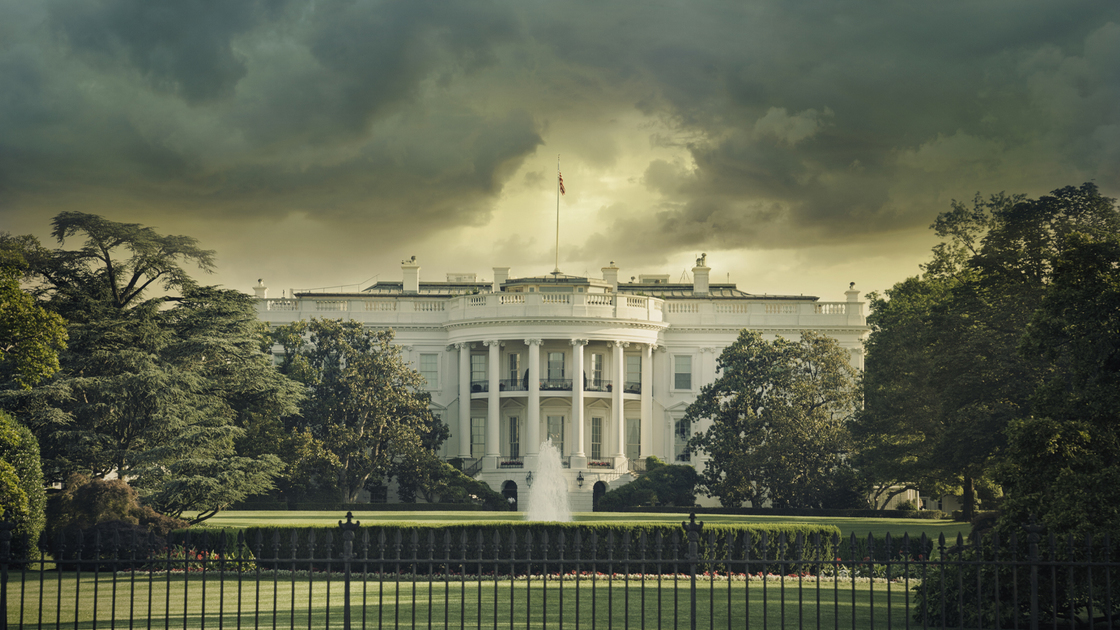 I hope you have been reading our newsmagazine, the Philadelphia Trumpet. In a series of articles I have been explaining how the extraordinary political developments in America were actually prophesied in your Bible! These prophecies explain the crucial roles that the last three presidents—Barack Obama, Donald Trump and now Joe Biden—play in end-time events in this nation.

My July 2021 article was titled “What Will Happen After Trump Regains Power” (theTrumpet.com/23957). Many people are acting like President Trump is history. But as that article says, prophecy not only shows he will return to office, it provides astonishing detail about what will occur once he does!

God has a powerful message to proclaim to America in general and its 45th president in particular. It is up to His end-time Work to make God’s message as clear as possible.

A key passage illuminating these events is 2 Kings 14:26-27—history that is also prophecy. This passage is about Israel, and in Bible prophecy, the nations of Israel are mainly the United States, Britain and the Jewish state of Israel (request our free book The United States and Britain in Prophecy for proof). These nations are now in advanced stages of decline and are at imminent risk of being blotted out! But God said He would not allow the name of Israel to be blotted out and that He would save them “by the hand of Jeroboam.” He did this in the eighth century b.c. through King Jeroboam ii, and He has done it in our day through Donald Trump.

Verse 28 indicates a pause in President Trump’s hold on power. “How he warred and recovered Damascus and Hamath” refers to him fighting in some way to reclaim his stolen election—and not by being voted back in at a future election.

The book of Kings is one of the former prophets. It is primarily prophecy for this end time.

The other key passage regarding Jeroboam is Amos 7:8-9: “And the Lord said unto me, Amos, what seest thou? And I said, A plumbline. Then said the Lord, Behold, I will set a plumbline in the midst of my people Israel: I will not again pass by them any more: And the high places of Isaac shall be desolate, and the sanctuaries of Israel shall be laid waste; and I will rise against the house of Jeroboam with the sword.”

This passage, I believe, includes another indication of this pause in President Trump’s power that I did not see before.

A Pause in Amos 7

These verses in Amos 7 describe the Prophet Amos’s message from God to King Jeroboam. They also describe God’s message today, which we will soon send to the modern Jeroboam!

President Trump was in the White House for four years, and things went relatively well during that period. God’s Work supported Mr. Trump as God used him during his four-year presidential term to save Israel temporarily, to keep the name of Israel from being blotted out.

But verse 9 speaks of a time of desolation, wasting and the sword. God says that He Himself “will rise against the house of Jeroboam with the sword.” That is a very different picture than you get in verse 8!

I believe there is a pause in the events between verses 8 and 9 of Amos 7, and that we are in this prophesied pause now. God is showing us this to prepare us for what is coming.

President Trump is being brought back for one reason—to keep Satan and his political Antiochus from blotting out the very name of Israel! (Learn what I mean by “political Antiochus” in my free booklet America Under Attack.)

Look around today: This country is in a catastrophe! Radicals are destroyingthe nation, foolishly thinking that somehow they will be able to control these ruinous, anarchic forces they are unleashing. And all this trouble we are already experiencing is going to lead to more trouble.

“The sanctuaries of Israel shall be laid waste,” verse 9 says. The word sanctuaries is interesting; it refers to false churches that God will allow to be destroyed. But it could also mean something more. Gesenius’ Hebrew-Chaldee Lexicon defines the word as asylum: protection, especially for those pursued by the law; an institution for the destitute. The Theological Wordbook of the Old Testament states,“Metaphorically, the word is used to refer to a place of refuge.” In the modern nations of Israel, it could be describing sanctuary cities. It could portray our sanctuary nation, where our leaders allow anyone and everyone to flow across the border. Many are looking for a better life, but others are violent members of gangs and cartels, and smugglers bringing drugs, slaves and thousands of destitute people here. How can this “sanctuary nation” policy not tear this nation apart? Our leaders do not even screen them! Yet they insist that the nation spend billions and billions of dollars to manage this problem they are causing, even when we have $28.3 trillion in debt that we can never repay—debt that will explode in our faces at any time! This is fiscal, political and intellectual insanity.

Recognize what is really happening in this land. Those supporting God’s Work must know that we must begin to take action. God says He will rise against the house of Jeroboam with a sword. This means the terrible state we are in now is about to get worse! After the radicals have catastrophically weakened this country, the result will not be what they expect. They won’t even have the opportunity to build the new system they imagine: A sword—foreign attack—is coming! They have weakened the country for other nations to destroy it!

This destruction will not blot out the name of Israel.

The Land Cannot Bear It

God is going to bring Jeroboam back. At that time we will proclaim God’s specific warning message in Amos 7:9 to the modern Jeroboam and his followers, and to those three dying nations of Israel: America, Britain and the Jewish state.

What do you suppose will happen as God’s Work proclaims this message in our magazines and literature,and on television, radio and the Internet? As national calamity intensifies, so too will this message. And it will rapidly reach a crisis point where people will want to silence it! You can see it building and getting far worse already.

This is what verse 10 describes: “Then Amaziah the priest of Bethel sent to Jeroboam king of Israel, saying, Amos hath conspired against thee in the midst of the house of Israel: the land is not able to bear all his words.”

God’s Work is right in the midst of these cataclysmic events! And we are telling the nation and its leader God’s words. It is a dire warning, and they cannot bear it!

God’s Work has a short final job that we must fulfill! There is going to be a big change in our message. It is a strong message, and we must deliver it.

God’s message to the people of modern-day Israel is to repent, to not trust in themselves but to turn from their sins and trust in God (see Isaiah 8). If they would do so, they could receive incomparable blessings! Sadly, their ancestors did not repent, and nothing indicates that the modern nations of Israel will repent. You individually, however, can do so!

The Americans, British, Jews and other descendants of ancient Israel have been sinning, and God is rising against them! Here at the very end, we must give the leader—who will definitely be Mr. Trump—and his followers a fiery warning.

These prophecies seem to omit Barack Obama, the political Antiochus, who has been responsible for so much destruction through his two presidential terms and through Joe Biden. The way these prophecies read seems to indicate that he will be off the scene and that God will have turned events to ensure that His warning message can be delivered.

This message is a stern warning that something even worse than internal war is coming: war from outside. “For thus Amos saith, Jeroboam shall die by the sword, and Israel shall surely be led away captive out of their own land” (Amos 7:11). This refers to an attack by foreign nations! Prophecy tells us that the modern Assyrians—Germany leading a European empire—are the ones to watch.

Germany has an election in September. Watch that closely. After 15 long years in office, Chancellor Angela Merkel is retiring. Meanwhile, her political party is losing favorability with the people while its sister party, the Christian Social Union, is surging. This could lead to a more assertive German government and the rise of a prophesied destructive dictator we have been watching for. Watch these elections, and watch the maneuvers of Karl-Theodor zu Guttenberg (my free booklet A Strong German Leader Is Imminent explains why).

God’s Work has been proclaiming this warning about the sins of modern Israel and the coming attack by the modern Assyrians for more than 75 years.

Anciently, Israel was conquered and taken captive by Assyria. And it started with the rebellion of the original Jeroboam, Israel’s king. After King David died and his sons rebelled, God told Jeroboam that He would take most of the tribes of Israel away from David’s throne and put them under Jeroboam’s throne. But He said He would never destroy David’s throne in Jerusalem—because that is where His own throne will be for eternity. He said He would afflict but preserve David’s throne “that David my servant may have a light alway before me in Jerusalem” (see 1 Kings 11:26-39).

Today, that throne with that wonderful light is within God’s Church. (Learn more about this in my free book The New Throne of David.) This too is part of the message we will take to the modern Jeroboam. But prophecy indicates that message will be rejected.

Amos 7:11 shows that the ultimate result is that the sword of America’s enemies will prevail, and the modern Israelites will be “led away captive out of their own land.” That is part of this powerful message that we must proclaim.

And what will be the reaction of those in power?

“Also Amaziah said unto Amos, O thou seer, go, flee thee away into the land of Judah, and there eat bread, and prophesy there: But prophesy not again any more at Bethel: for it is the king’s chapel, and it is the king’s court” (Amos 7:12-13). This describes the modern Jeroboam back in power and rejecting God’s message through this wicked priest, Amaziah.

When God’s Work publicizes the truth with amplified power in the midst of escalating national crises, the land simply won’t be able to bear it. That is when these national powers will expel God’s people!

Then God will take His very elect to a place of safety.

This will happen! God’s people must have faith to deliver that message and to trust God when the nation and the government turn against us. We must have faith in God the Father and His Son to strengthen us to do His will.

We have a trumpet-warning message to deliver. It is a prophecy of the destruction of the modern nations of Israel: the United States, Britain, the Jewish state and other related nations. Prophecy tells us that they will reject that message. But it also tells us that when all these events actually happen and people are suffering terribly, many who have heard God’s message will repent. A great multitude of people will repent after the sword begins to lay waste to our nations. Many who have heard the message and who have been part of God’s one true Church doing His great Work but then rebelled, will also repent—giving their lives for God and His message.