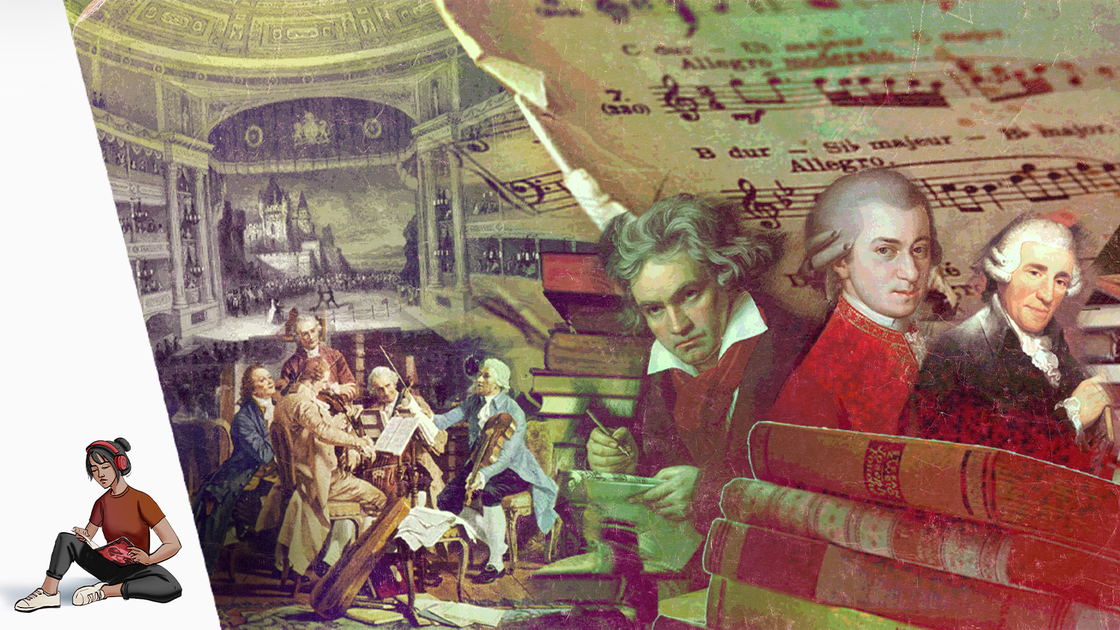 Whitney Houston wants to dance with somebody. She has often informed me of this several times a month with zero effort on my part. I have heard her pleas doubtless hundreds of times over the course of my life despite never owning a Whitney Houston album or attending a Whitney Houston concert. There are many popular artists whose songs I am highly familiar with despite more effort to not hear them than to hear them.

Mark Steyn wrote: “Most of us have prejudices: We may not like ballet or golf, but we don’t have to worry about going to the deli … while some ninny in tights prances around us or a fellow in plus-fours tries to chip it out of the rough behind the salad bar. Yet, in the course of a day, any number of non-rock-related transactions are accompanied by rock music.”

We live in a society with an aggressive present-tense culture. As years go by, the significant history and culture of the past is quickly fading into oblivion.

This term “present-tense culture” came from an article Mark Steyn wrote as a 30-year retrospective on Allan Bloom’s The Closing of the American Mind. He wrote: “‘Popular culture’ is more accurately a ‘present-tense culture’: You’re celebrating the millennium but you can barely conceive of anything before the mid-1960s. We’re at school longer than any society in human history, entering kindergarten at 4 or 5 and leaving college the best part of a quarter-century later—or 30 years later in Germany. Yet in all those decades we exist in the din of the present. A classical education considers society as a kind of iceberg, and teaches you the seven-eighths below the surface. Today, we live on the top eighth bobbing around in the flotsam and jetsam of the here and now. And, without the seven-eighths under the water, what’s left on the surface gets thinner and thinner.”

That’s an amazing metaphor for the state of our culture: bobbing around in the flotsam and jetsam of the here and now, unable to see your heritage frozen beneath the icy waters.

Bloom himself wrote: “Classical music is now a special taste like Greek language or pre-Columbian archaeology, not a common culture of reciprocal communication and psychological shorthand.”

That’s an interesting concept: “reciprocal communication and psychological shorthand.” What does it mean?

On Jan. 9, 2020, theTrumpet.com featured an article titled “American Politics and Othello.” As the article unfolded, author Joel Hilliker explained the basic plot of Othello. Instead of presuming his audience was already familiar with the plot of one of Shakespeare’s most famous plays, he was forced to unveil its plot turns to the reader as surprises. In most cases, they probably were.

That probably doesn’t get much of a reaction from you. Why would anyone expect instant recognition of Othello’s story?

Now imagine that he had compared present-day American politics to Star Wars. We certainly could expect instant recognition of that story and its characters. In this scenario, the presumption that the readership knows the story, knows the background—reciprocal communication and psychological shorthand—is entirely reasonable.

If I say “the wheel has come full circle,” you are probably not instantly transported to the fifth act of King Lear as Edmond speaks his dying words to Edgar. Dropping a Shakespearean quote in everyday conversation no longer works as conversational shorthand. But quoting the Princess Bride does. And I find this … inconceivable.

People have no strong opinions on Richard iii, but there are entire websites devoted to people’s thoughts on the Back to the Future trilogy.

This is not an objection to Back to the Future,The Princess Bride, or Star Wars. It is shining a spotlight on what we are neglecting—and therefore losing.

Allan Bloom describes a modern student walking through a museum and how it reveals the student’s condition. The artists relied on immediate recognition of their subjects and on a knowledge of history. Since modern students no longer have that background, art becomes something abstract, and it cannot speak to them. They lose their heritage.

Steyn wrote: “What an achievement it would be if every high school could acquire a classical catalogue as rich as that used in Looney Tunes when Elmer Fudd goes hunting Daffy Duck or Bugs Bunny. Carl Stalling, who scored those cartoons, often fell back on formula: If someone was in a cave, the orchestra would play ‘Fingal’s Cave.’ But you can’t even do that anymore, because no one gets the joke.”

Beware our present-tense culture. It doesn’t care about history, literature, art, or the history of Western music. It actively opposes historical statues and the founding of the United States of America. It has no interest in morality or religion. And as disturbing as it is in the realm of books, theater and cinema, it is perhaps most disturbing in music.

While 2.5 percent of album sales in the United States are classical music, it accounts for less than 1 percent of total streams, according to tracking service Alpha Data.

Bloom wrote: “Rock music is as unquestioned and unproblematic as the air the students breathe, and very few have any acquaintance at all with classical music.

“As long as they have the Walkman on, they cannot hear what the great tradition has to say. And, after its prolonged use, when they take it off, they find they are deaf. Nothing is more singular about this generation than its addiction to music.”

Imagine his reaction now. They didn’t have one-tenth of the access to music we have today. You could name any remotely popular song, and likely even an unpopular song, and I could have it playing over a Bluetooth speaker in under 10 seconds.

Mr. Ron Fraser wrote: “Half a century on from the dawn of the rock era, Roger Scruton observed that, to the average member of the public, ‘singing is strange to them, instruments unknown, and most of the music they hear is not listened to but overheard, piped into their lives by the disc jockeys who control the musical diet of mankind, and who are busy replacing the solid protein of hymns and folksongs with the sugar, starch and glutamate of pop’” (February 2009, Philadelphia News).

What if we were to rewind the clock, say, 57 years to 1964? That’s the year a rock band came on the scene: the Beatles. The reaction was epic, even by modern standards:

“Visually, they are a nightmare: tight, dandified Edwardian-Beatnik suits and great pudding bowls of hair. Musically they are a near disaster, guitars and drums slamming out a merciless beat that does away with secondary rhythms, harmony and melody. Their lyrics (punctuated by nutty shouts of ‘yeah, yeah, yeah!’) are a catastrophe, a preposterous farrago of Valentine-card romantic sentiments …” (Newsweek, Feb. 24, 1964).

“They are so unbelievably horrible, so appallingly unmusical, so dogmatically insensitive to the magic of the art that they qualify as crowned heads of anti-music, even as the imposter popes went down in history as ‘anti-popes’” (Boston Globe, Sept. 13, 1964).

“The Beatles’ vocal quality can be described as hoarsely incoherent, with the minimal enunciation necessary to communicate the schematic texts” (New York Times, Feb. 10, 1964).

“Just thinking about the Beatles seems to induce mental disturbance. They have a commonplace, rather dull act that hardly seems to merit mentioning, yet people hereabouts have mentioned scarcely anything else for a couple of days” (Washington Post, Feb. 13, 1964).

This is just a small sample. The adults representing the news media at the time were appalled by these people who, as John Lennon once famously declared, thought they were more popular than Jesus Christ.

Go back 10 more years, and we come to 1954—the year Elvis Presley began his career. Ten years before that, Frank Sinatra was just starting out. In 1980, Mr. Armstrong wrote about the link between Presley, Sinatra and the Beatles:

“It picked up what had been started by Frank Sinatra, when teenage girls ran screaming half out of their minds for his autograph. It was revived and intensified by Elvis Presley. Then the Beatles delivered Satan’s knockout blow to any public sense of social values in the world” (Worldwide News, Dec. 22, 1980).

Mr. Armstrong, writing about a time when I wasn’t alive and my parents were still teenagers, said that the sense of social values in the world had been knocked out. Society’s morality never woke up! He credited that to Satan using the Beatles as a tool. Our entire present-tense culture has developed in that climate—a society whose moral center has been knocked out.

Now imagine that you are a film director thinking: What could be removed from history that would represent a great tragedy? Shakespeare? Beethoven? Mozart? No, people don’t care about them enough.

This question was answered with a mainstream movie in 2019 called Yesterday about the cultural blow it would be if the Beatles music disappeared from society. Our present-tense culture has decided what is culturally significant in our world. And it’s the Beatles, not Beethoven.

Our present-tense culture can’t see anything before the last 60 years. Anything beyond a few decades is essentially erased in most people’s minds!

So what can you do about it?

Don’t make society’s culture your culture. Read the wealth of great literature that is so easily available. Study history. Dabble in the tapestry of Western orchestral music instead of a constant diet of amplified electronic instruments that didn’t exist 100 years ago, backing lyrics that aren’t fit for human consumption.

That’s all philosophical though, so let me leave you with this one, simple request: As you sit in your homes tonight, don’t answer Whitney Houston’s pleas or turn to our modern heroic spandex brigade on Netflix. Instead of floating on the miniscule flotsam and jetsam of the here and now, consider mining the depths of the rich heritage that is easily available to you—and make that your present-tense culture.