Coral: A Unique Phenomenon
A weird and wonderful inhabitant of the underwater world
By Rachel Brown • April 29, 2021 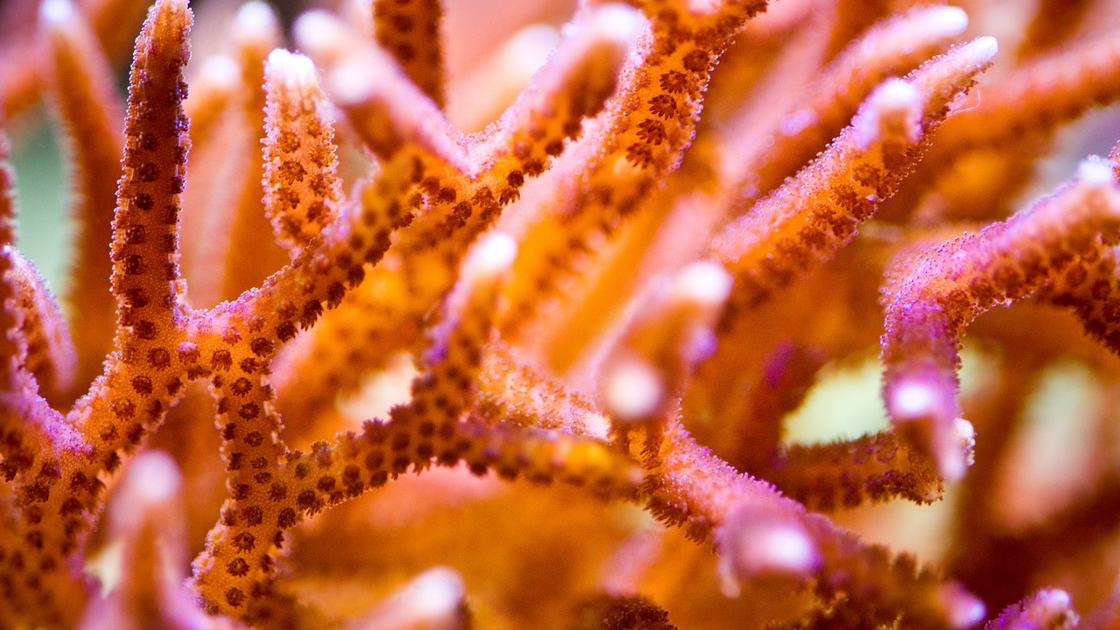 Now, I know what you’re thinking: I know what coral is, but what is a coral polyp? A coral polyp is a tiny little animal that joins up with many others to make up coral. Yes, you read that right. Coral is in fact composed of little animals, not plants! Polyps are actually relatives of anemones and jellyfish (talk about awkward family reunions). Thousands of polyps join together to form a colony and work together as one organism, forming what we know as coral—or coral reefs. Reefs are made when a polyp fastens itself to a rock on the sea floor and then reproduces itself into thousands of clones.

Most of the little coral animals are translucent. But wait, the whole reason we love coral is because it’s colorful, right? Right.

Oh! You wanted an explanation?

OK. Single-celled algae called zooxanthellae live inside the polyp’s cell walls. The polyp’s wild hues come from these vibrant algae; the two have a symbiotic relationship. The zooxanthellae perform photosynthesis and hand off some of the food they make to the coral, and the coral gives the zooxanthellae a place to lodge and other nutrients in exchange.

Sometimes when things get really stressful in the coral world, coral will evict its occupants. The coral then loses all of its color and turns white. This effect is called bleaching. Bleaching can be caused by a change in ocean temperature, runoff and pollution, overexposure to sunlight, or extreme low tides. The good news is that coral are fighters. Once bleached (and not as pretty), they are more susceptible to disease, but they can still live.

You might still be stuck on the fact that coral isn’t a plant. Honestly, I’m still struggling with that fact as well. Here comes another shocker—the polyps are also carnivores! Despite being fixed to one spot and unable to move, they are still able to catch prey like zooplankton and small fish. Danger comes in all different shapes and sizes, people.

In order to live a happy and abundant life as a stationary animal in the ocean, coral needs certain things to survive.

The first thing it needs is sunlight. I don’t know about you, but I can totally relate to this. (I bet you never thought you’d have something in common with coral, did you?) The zooxanthellae depend on the sunlight that shines through the water in order to perform photosynthesis. Photosynthesis keeps the symbiotic relationship happy and healthy.

Secondly, coral needs clear water. This point aligns with the first. The sunlight has to be able to shine through the water in order to get to the hungry zooxanthellae. If the water is murky for some reason, and the sunlight can’t reach the coral, well … would you be happy if you were hungry?

Factor No. 3: warm water temperature. This is a must for coral—and also for most small children when you are giving them a bath. Some coral is able to withstand bigger temperature fluctuations because of the region it is native to, but coral is generally happy in water temperatures of 68-90 degrees Fahrenheit.

Necessity No. 4 is clean water. This one is definitely relatable for everyone. Of course, coral won’t be completely healthy if the water is clouded by sediment, since the sediment will block sunlight and hurt the delicate polyps. Things like wastewater and pollution can also bully the coral. No one likes to be bullied.

The last factor for vibrant coral is saltwater. That’s why you won’t find coral in the lake in your backyard, unless you live on a tiny island somewhere in the Pacific where the ocean is your backyard.

I know you’re probably thinking that coral is just a really picky and needy little plant-looking animal. To try to deter you from this point of view, here are some interesting facts about the biggest coral reef in the world; the Great Barrier Reef. For starters, it is one of the seven natural wonders of the world. It’s so big, it’s visible from space! (Good job zooxanthellae! Way to shine your light! Literally.) It is the size of 70 million football fields. For you geography enthusiasts out there, that’s the size of Japan or Italy. Another interesting fact is that when the coral in the Great Barrier Reef enter spawning season, the area around the coral resembles an underwater snowstorm.

There are many coral reefs in the world, and they are all located in tropical oceans. The largest coral reef has already been mentioned, and it is off the east coast of Australia. The runner-up in size can be found off the coast of Belize, a country on the Caribbean coast of Central America. There is also coral in places like Hawaii and the Red Sea.

Ah, coral—the animal everyone thought was a plant (unless you already knew the truth). But seriously, it is another amazing testimony to the thought and detail that went into God’s creation. Not only did He make such an intriguing animal, He also created it to rely on other things in its environment—and all of those things fit and work together perfectly. He did the same for humankind and the animal kingdom. God’s creation is very diverse, but He has the same underlying strategy for it all. He likes variety, but none of it is chaotic or confusing. It is very detailed and divinely organized. Every creature is like a miracle within a miracle. It’s endless—and so is God’s creativity!