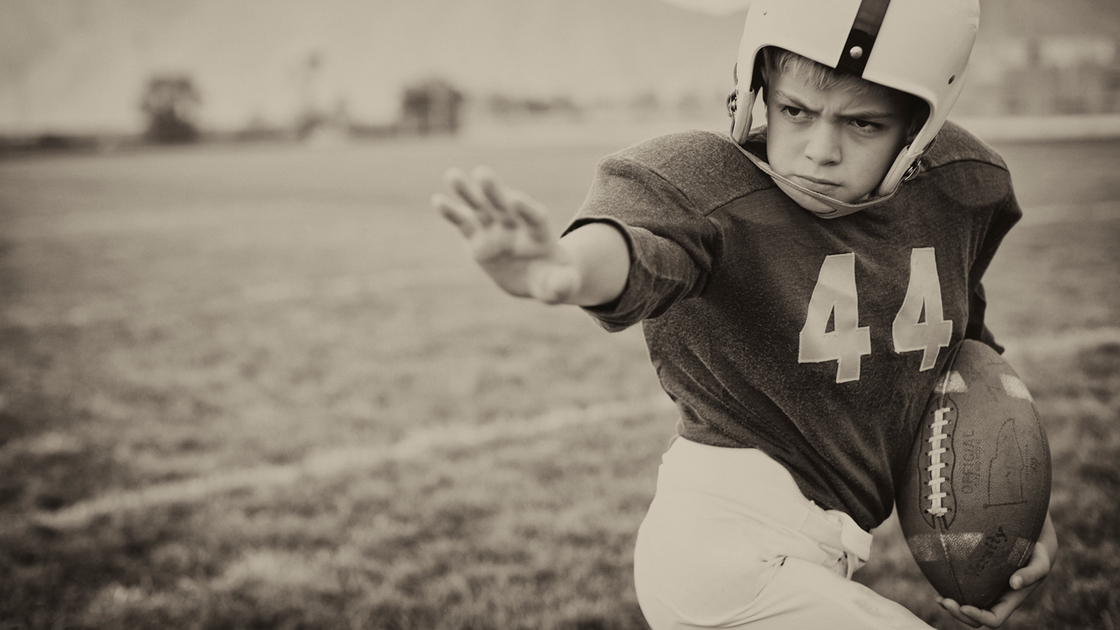 In a 1967 “Personal” about the wcg’s Summer Educational Program for youth, Herbert W. Armstrong wrote, “These kids are kept so busy, in work they enjoy, in study they find absorbing and exciting, in recreation—swimming, canoeing, power-boating, water skiing, in games and fun—there’s no time for mischief, moral or otherwise. They’re kept busy right up to bedtime, and then they’re so tired they get right to sleep.”

It’s not that way for most young people today. According to an article titled, “The Great Indoors: Today’s Screen-Hungry Kids Have Little Interest In Being Outside,” the average child between the ages of six and 16 in the UK spends just an hour a day outside—and plays video games for more than twice that long.

“Today’s children and teens,” the article continues, “… prefer a whole host of activities over playing the mud. These activities include gaming, watching TV, surfing the web, and listening to music. … ‘With games such as ‘Fortnite’ taking over the lives of many young children, they would prefer to stay indoors than kick a football around with friends or wander through the woods,’ says Chris Allen, a department manager at [a sports retailer], in a statement.”

Can you imagine a video game taking over your life? This is common for kids in the United Kingdom.

“More shockers: four in ten British adolescents have never gone camping, nearly half have never built a den or fort, and more than half have never climbed a tree. Many who had tried these rites of passage couldn’t stop thinking about their devices.”

Kids these days don’t climb trees. They don’t go outside. They don’t kick a ball around. They don’t play active games outdoors. Instead, they watch screens all day.

During World War ii, Prime Minister Winston Churchill attached red stickers that said “Action This Day” to any document or memo that required immediate action. The real shame is that the young people in the UK and throughout the world today are not in the habit of living active lives. Their video games and gadgets are not going to motivate them to get excited about a life of action.

Some of the laugh-out-loud moments from The Last Lion: Visions of Glory, the first volume of William Manchester’s three-volume biography of William Churchill, are those sections describing the way he was as a youth. He was active.

Throughout his life, Manchester wrote, Churchill “was at various times an airplane pilot, artist, farmer, fencer, hunter, breeder of racehorses, polo player, collector of tropical fish, and shooter of wild animals in Africa.” He was used to taking action.

This is made even clearer in looking at the topics he liked to write about. Manchester wrote, “More than half of the fifty-six books he published were about war and warriors; the two he most regretted not having found time to write were biographies of Caesar and Napoleon. Partly this was because he knew that peace hath not her heroes, and he meant to be heroic. … He agreed with George Meredith: ‘It is a terrific decree in life that they must act who would prevail.’”

Those who prevail are men and women of action. That is a powerful concept, and it shows how important action is. Satan is behind the movement that gets young people to sit down in front of a screen all day. Like Albert Einstein said, “Nothing happens until something moves.” You are not going to accomplish anything of purpose—anything significant—unless you take some kind of action. Every successful venture flows from action of some kind.

Churchill was more wary of inaction than he was of action. He believed halfway measures were more dangerous than none at all—that if you are going to act, you need to do it whole-heartedly. Ecclesiastes 9:10 backs up Churchill’s belief: “Whatsoever thy hand findeth to do, do it with thy might; for there is no work, nor device, nor knowledge, nor wisdom, in the grave, whither thou goest.”

When the British Empire was at the peak of its power, it took constant action. “Under Victoria,” Manchester wrote, “one regiment or another had been in action every year, somewhere on five continents, fighting from Aden and Afghanistan to Zululand and the Zhor Valley. They were almost always victorious. One reason was their sublime, unfathomable courage. … An astonishing number actually enjoyed courting death.”

It wasn’t just Churchill, in his travels to India, Egypt and South Africa, who liked to court death—this was the English way. And when the British Empire was taking action, when it was on the offensive, it expanded its territory, power, influence and reach.

In 1897, when he was only 22 years old and delivering his first political address, Churchill said, “There are not wanting those who say that in this Jubilee year our Empire has reached the height of its glory and power, and that we now should begin to decline, as Babylon, Carthage, and Rome declined. Do not believe these croakers, but give the lie to their dismal croaking by showing by our actions that the vigor and vitality of our race is unimpaired and that our determination is to uphold the Empire that we have inherited from our fathers as Englishmen.”

Churchill was not going to let the British Empire go down without a fight. That is what he said in 1897. No wonder he saved Britain during World War ii! He had the same action-oriented spirit from youth to old age.

Winston Churchill was no Little Englander by any means. He was a man of vision. He was a man of action. This is the spirit that we want to cultivate in God’s Church and at God’s youth camps. Churchill took this action-oriented spirit right into Britain’s darkest hour during World War ii.

Prior to Churchill’s appointment as prime minister, Britain had put off taking any action against Hitler. Germany marched through Europe, taking over Poland and Denmark and threatening Belgium and France—and still, Britain took no decisive action. It didn’t have a leader who was willing to go on the offensive.

When Churchill stepped into the office of prime minister on May 10, 1941, Britain finally got what it needed in a leader: someone who was willing to take the fight to the enemy. He didn’t wait until tomorrow, next month or next summer. He took action this day.

Herbert W. Armstrong is another example of someone who took action—and it started in the days of his youth. Read about his early life in the Autobiography. He was extremely active—particularly after the age of 16, when he had that spark of ambition. This is how he described it:

“[T]he man I was working for would put his arm on my shoulder and tell me how well I was working. … And he kept telling me this kind of thing, and encouraging me, and somehow he aroused ambition in me. And I came to realize that ambition was just two things. Of course, it’s a desire, a desire to succeed and to have, but also it is the resolution to work and to produce that desired result. And it doesn’t come easy, and I knew that.”

Mr. Armstrong realized that ambition is the resolution to take action. He took action! In his Autobiography, he wrote: “It is impossible to estimate the importance of this sudden arousal of ambition—this injection of an intense desire for success—this igniting of the spark of determined energy to achieve worthy accomplishment. This was the turning point of my life.”

Once Mr. Armstrong established this resolution to work and produce, he started working and never stopped. Once he was converted, this drive and determination to succeed was refocused to serve and give to God. The ambition he had to produce is the vital ingredient that is missing from most young people today. They don’t have this resolution to work hard.

The reason we have schools and colleges, Mr. Armstrong said, is because most people are too lazy to educate themselves. They are too lazy to take action. They need to go to the school where the program is laid out for them. There is a great purpose for school and college—God’s schools are excellent places of training for young people—but education does not stop once you receive the degree or the diploma. It continues throughout life—if you are active enough to go after it.

Mr. Armstrong ran into a lack of ambition back at Ambassador College. Some of the students were just “floundering around.” When he talked to them, he realized that they didn’t have an objective. They didn’t have a goal that drove them to action. One girl in particular said that her goal had been to come to Armstrong College, and now that she had achieved that goal, she didn’t have any others. Mr. Armstrong helped her to fix the right goal, and after that, she had ambition and took action. It just took the right goal.

How big are your goals? Your goal shouldn’t just be to get to Armstrong College. Even graduating from college is just the commencement. It is just the beginning. We need bigger goals. We need epic goals, physically and spiritually. Otherwise, we begin to bog down.

God says that we should set our minds on things above (Colossians 3:2). We have to have big goals spiritually, and the right goals will come with the motivation to achieve them. After a life of experience, Mr. Armstrong wrote the booklet The Seven Laws of Success. He knew what was required to succeed. The first law is to fix that right goal, whether it is your future job or your aim to get into God’s Kingdom. You need to have long-term, middle-term and short-term goals. Clearly identify those goals so that you know what to aim for.

The second law of success is education. Mr. Armstrong felt like he had the motivation and determination to educate himself. If you fix the right goal, focus on educating yourself toward that goal, and you will be motivated to learn as much as you can.

The third law of success is good, vigorous health so that you have the energy to drive yourself, which is the fourth law of success. You need to be able to put the prod on yourself—to take real, effective action. Mr. Armstrong always had this sense of urgency, and Winston Churchill had the same thing.

The fifth law of success is resourcefulness or, as Mr. Armstrong said in the Autobiography, “thinking about the problem at hand.” The sixth law of success is perseverance—never giving up, even when it seems like you have failed. The seventh and most important law is contact with God.