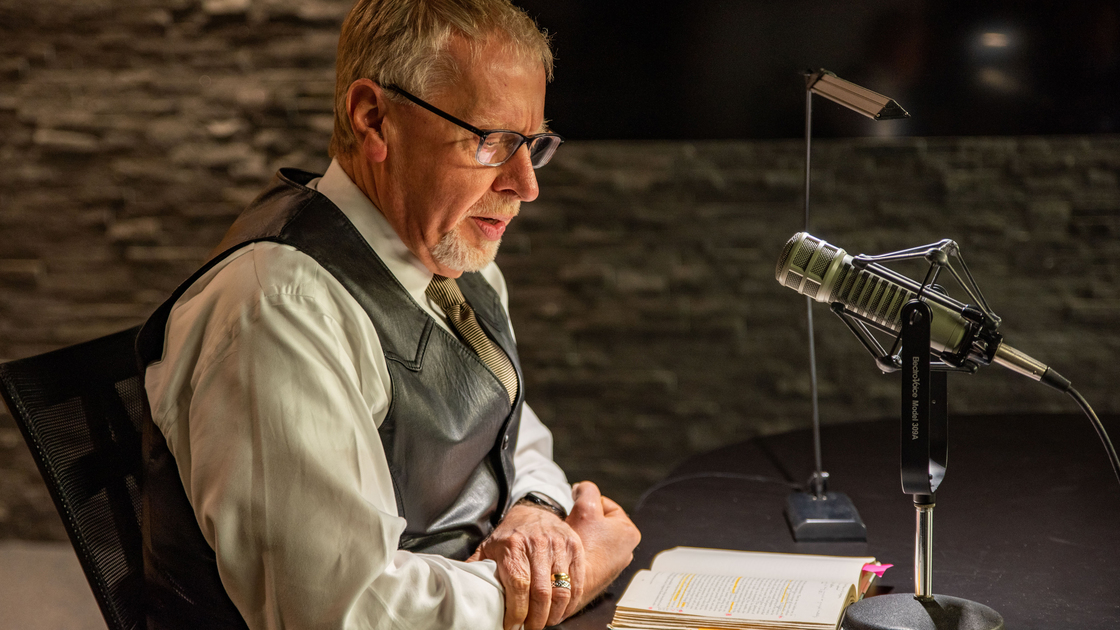 EDMOND—From the salty Cuban sea to the arid heat of the Arabian desert, from the jungles of the Congo to the mirror-adorned palace halls of Denmark and beyond, listeners of Just the Best Literature over the past five years have traveled thousands of miles and journeyed centuries back in time together. In his first program, which aired March 8, 2016, Just the Best Literature host Dennis Leap told his audience to consider the show as “the biggest international book club you could ever be a part of.”

While hundreds of listeners vicariously traveled through time and across the globe together from the comfort of their living rooms, within its first month of broadcasting, Just the Best Literature went international, interviewing lead actors from The Royal Shakespeare Company in Stratford-upon-Avon in England and taping broadcasts at Henry VIII’s palace at Hampton Court, where both Elizabeth I and James I watched Shakespearean plays in their private theatre.

Mr. Leap said that programs which received the most interest over the past five years have been those with special guest panels. Just the Best Literature guests may vary from teenagers, to Herbert W. Armstrong College students to authors and literature enthusiasts, giving listeners a wide variety of ideas and perspectives. One of the latest guests which the program hosted was Michael Sheldon, the author of a George Orwell biography.

When the program first began, it focused mainly on the need for people to read books, such as Old Man and the Sea by Ernest Hemmingway and Great Expectations by Charles Dickens, but as the program continued, Mr. Leap saw the need to include more biographies, in addition to literature classics in the 30-minute weekly broadcast. Over the past five years, listeners have read the Autobiography of Benjamin Franklin (Benjamin Franklin), George Washington: Founding Father and Churchill (Paul Johnson), and Darkest Hour (Anthony McCarten).

Mr. Leap has received responses from listeners in Asia, Australia, Eastern Europe, England and Canada. He reported that he had “never received a negative response” adding that “many appreciate the books we discuss and the weekly program.”

The program has covered more than 24 books and selected essays including, books such as A Whole Life (Robert Seethaler), Pride and Prejudice (Jane Austin), Utopia (Thomas More) and Hero: The Life and Legend of Lawrence of Arabia (Michael Korda); plays such as Richard III and Hamlet by William Shakespeare; and selected essays “The Central Axiom of Partisan Politics,” “The Real Message of Creationism,” and “Are We Alone in the Universe?” by Charles Krauthammer. Mr. Leap said that one of his personal highlights was broadcasting the series on George Orwell’s 1984, as it has “current themes that apply to our world today.”

After five years and a 252-program journey, many adventures still lie ahead. After finishing the current series on Youth, Heart of Darkness, and Lord Jim by Joseph Conrad, Just the Best Literature fans will be transported to the swelling waves of the Atlantic, experience the trials of a ship captain and come face-to-face with more than a legendary white whale in Herman Melville’s American classic Moby Dick.

Click here to listen to the latest Just the Best Literature program.